An Asian Food Channel and Pernod Ricard Collaboration: Great Dinners of The World! 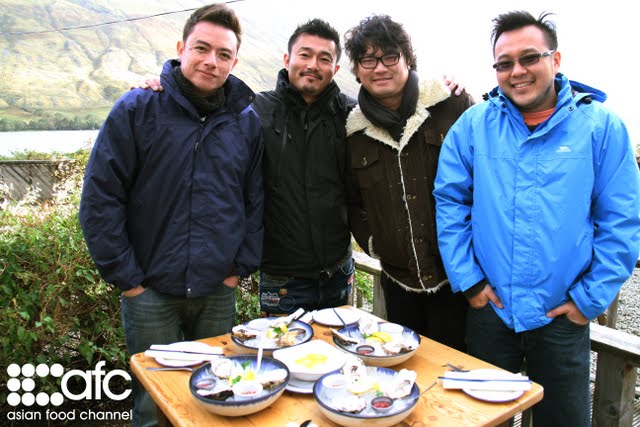 The World is their Oysters! 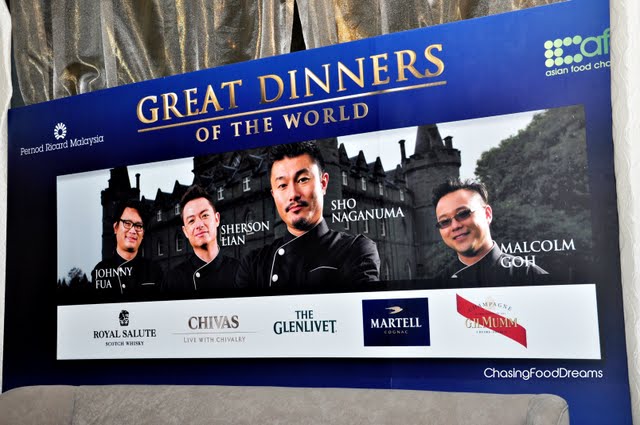 The Asian Food Channel is proud to announce the premiere of its latest original production, Great Dinners Of the World, on Tuesday, 13 December 2011 at 10.00pm, Astro Channel 703. Produced in collaboration with Pernod Ricard Malaysia (PRM), the exciting AFC original production will air new episodes every Tuesday and Thursday.
As AFC’s first-ever fully produced series filmed outside of Asia, Great Dinners of the World features four chefs who bring the best of Asian cuisine beyond the region. The four maestros Chefs – Chef Sho Naganuma, Chef Malcom Goh, Chef Johnny Fua and Chef Sherson Lian are selected from Singapore and Malaysia’s diverse culinary scene and were put to a challenge by travelling to faraway places with varying lifestyles, cultures and gastronomic palates! 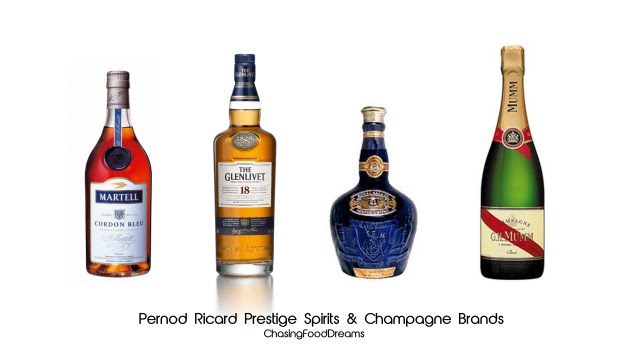 In all the six episodes, food lovers are treated to an intriguing showcase of Asian flavours and dishes, amidst picturesque settings of Scotland and France - the homes of Chivas whisky, The Glenlivet, GH MUMM Champagne and Martell cognacs. With the goal of bringing the flavours of Asia to their European dinner guests, The team of chefs cook for the rich and famous while pairing their signature dishes with the finest cognac from the House of Martell, from the distilleries of Chivas and The Glenlivet whiskies, as well as the vineyards of GH MUMM champagne. 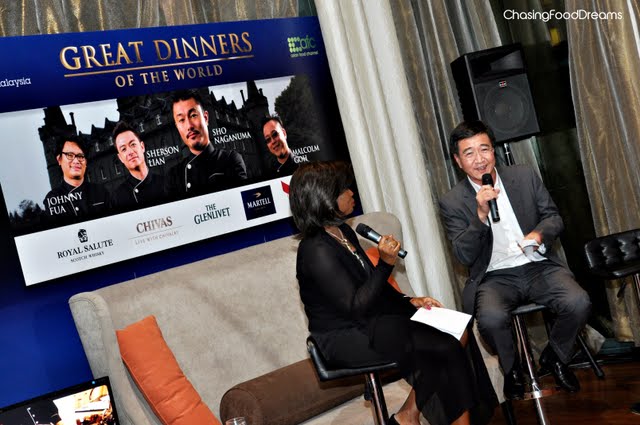 The launch set off with a tribute by Maria Brown and CK Tan on the makings of Great Dinners of the World. 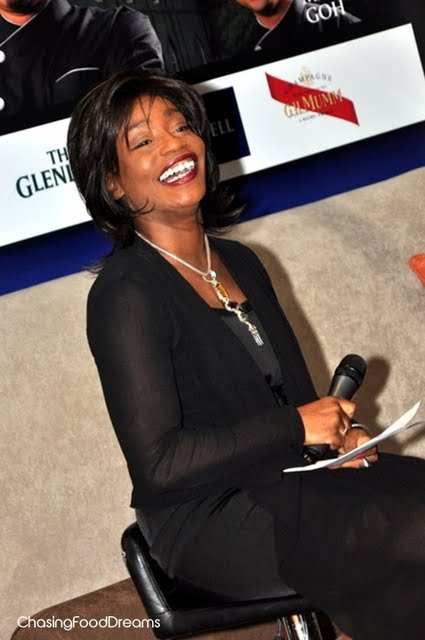 Maria Brown, Co-Founder and Managing Director of AFC said, “As the region’s first 24-hour food channel, AFC is committed in airing the best food and lifestyle programming from around the region and the world. We have pushed new boundaries with the premiere of Great Dinners Of the World, offering our 45 million viewers in eight territories a programme that gives a unique take on the diversity of Asian cuisine. Not only is it a travelogue that showcases the beautiful landmarks in France and Scotland, the series also has the element of reality to it – which makes this programme such an exciting and thrilling show to watch! The challenges, disagreements, triumphant moments and team dynamics seen among the four chefs, as well as all the mouth-watering Asian dishes, together contribute to the overall enjoyment of the programme. Great Dinners of the World encompasses all the best genres that we have to offer in one fantastic series.” 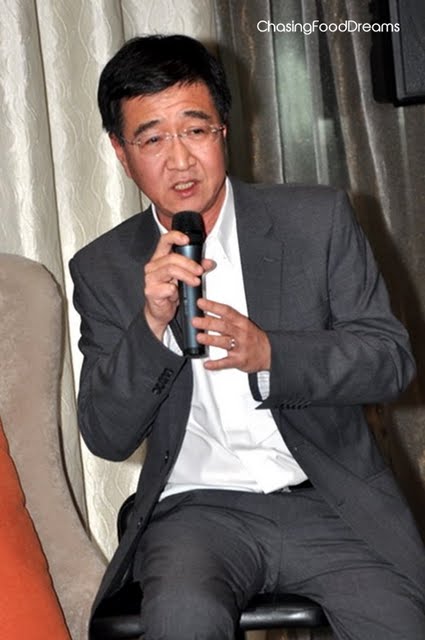 CK Tan, Managing Director of Pernod Ricard Malaysia shared, “It is rather apt for Pernod Ricard Malaysia to play a part in nurturing young talented chefs. Gourmet and culinary have become important components in marketing our cognacs, whiskies and champagne. As we have already a 3-Star Michelin kitchen and staff, we knew we could afford to expose these chefs and enrich their perspectives towards work and life in general.” 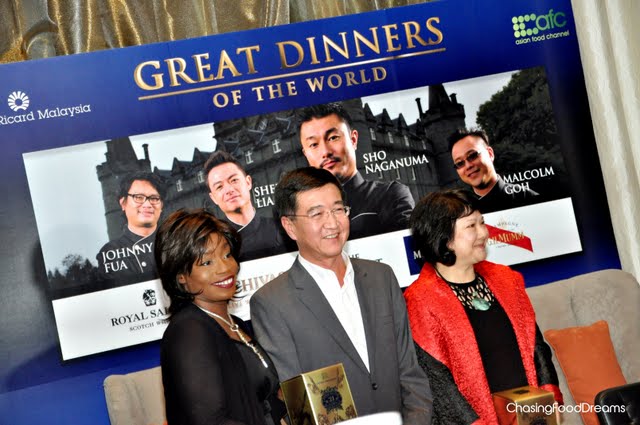 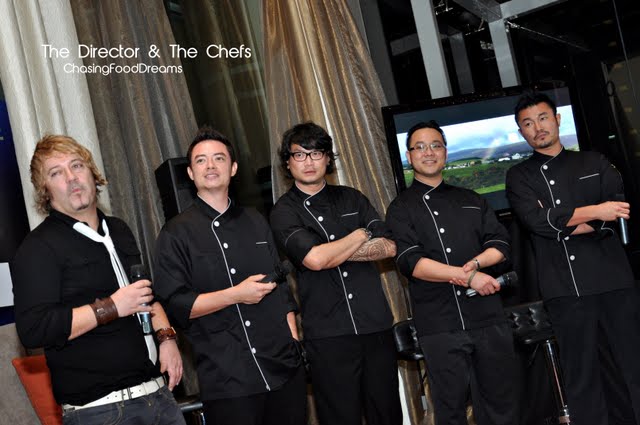 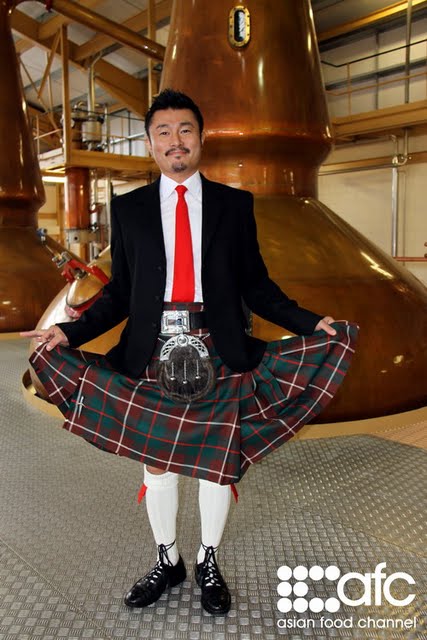 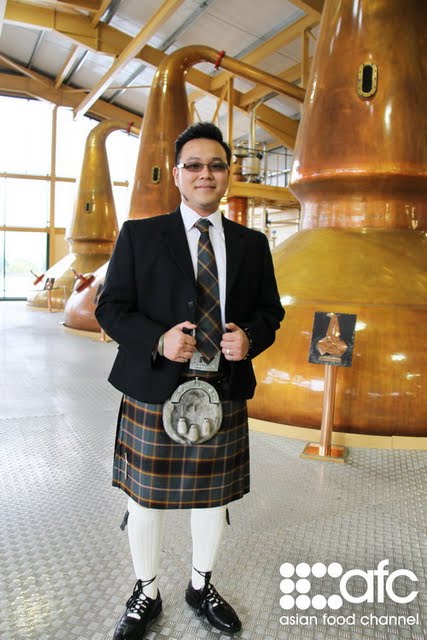 Malaysian chef, Malcolm Goh, joins the team, bringing his vast knowledge of ingredients to the team. Chef Malcolm is currently a lecturer at Berjaya University College of Hospitality and is highly recognised in his field. He has won countless awards. Most recently, he won the silver award at the Hong Kong International Culinary Classic 2011. 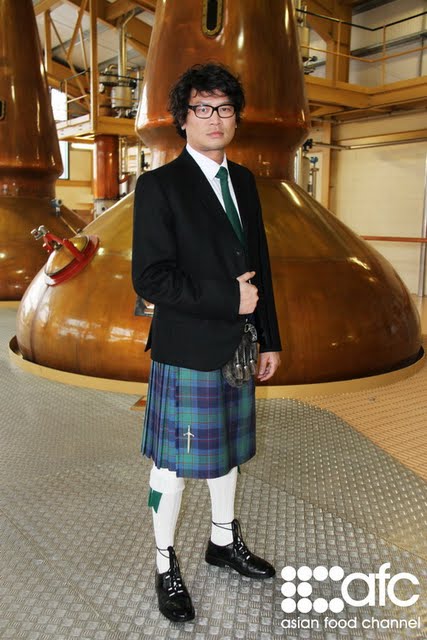 Adding a little rock and roll experience to the mix, is Malaysian Chef, Johnny Fua, who currently holds the position of Executive Chef at Tanzini Restaurant, GTower, Kuala Lumpur. Having worked in the restaurant business for over 20 years, Chef Johnny is able to command a professional kitchen with ease. 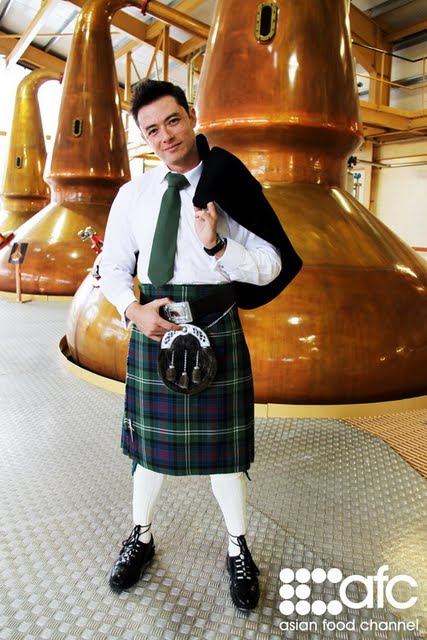 Rounding off the team of four is television cook and Malaysian national, Sherson Lian. Sherson is no stranger to the camera, starring in his own cooking programme, 5 Rencah 5 Rasa. A playful extrovert by nature, Sherson brings his own flair to the kitchen with his personal take on traditional Malaysian street food. 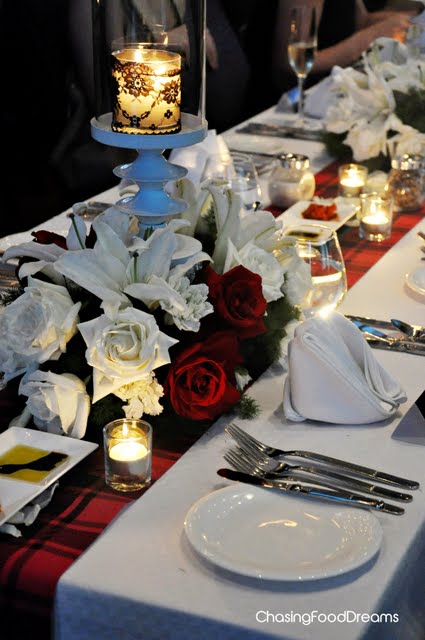 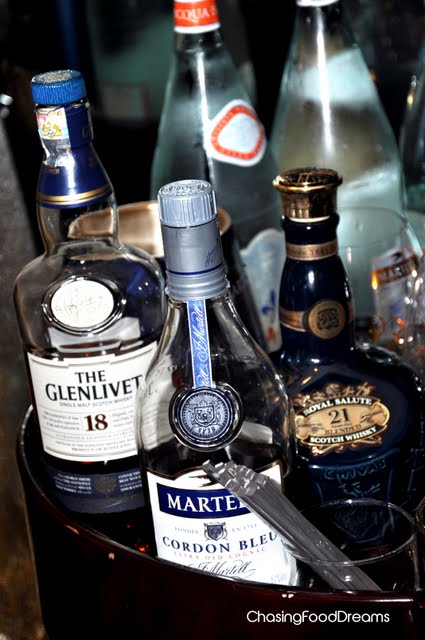 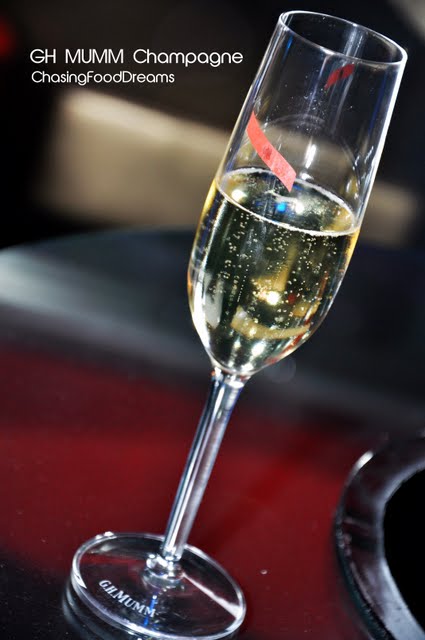 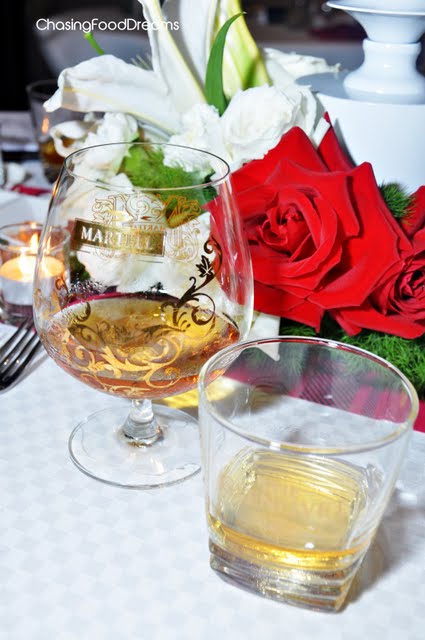 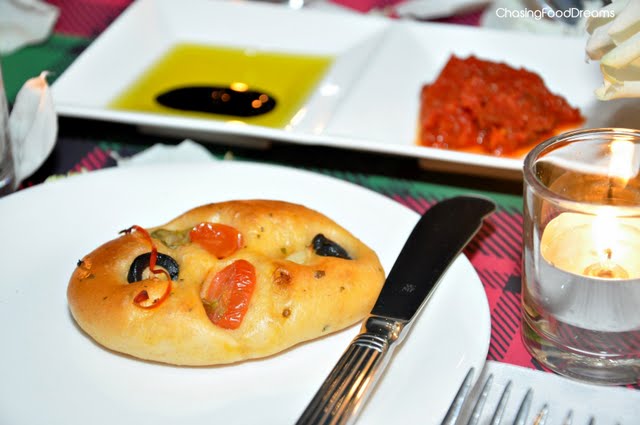 We were truly fortunate to taste all four chef’s dishes inspired by their travel! 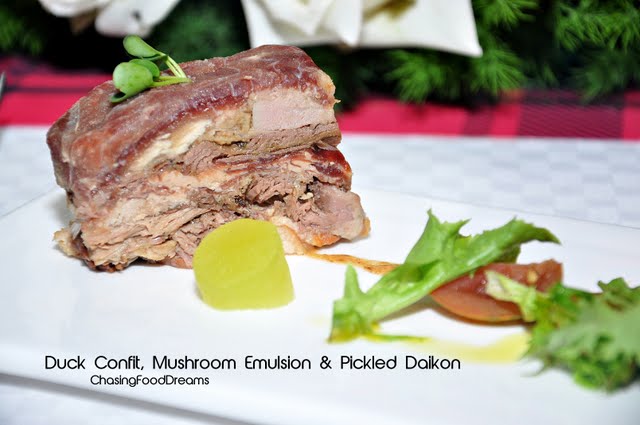 Duck Confit, Mushroom Emulsion, Pickle Daikon by Chef Malcolm Goh
Impressed by the fine French cuisine, the duck confit terrine was a beautiful piece of art in flavors! Tender and moist duck confit was satisfying and rich in a very good way. The woody and light mushroom emulsion enhances the terrine very well while the pickle daikon added a hint of fusion to this dish! 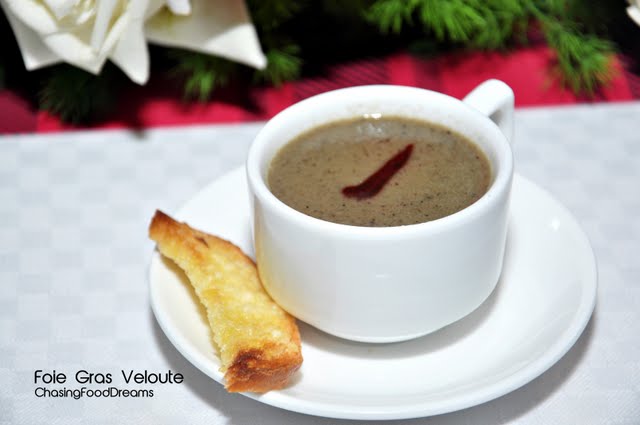 Foie Gras Veloute by Chef Sho Naganuma
Chef Sho was inspired by both the country local produced product, their market, people and the other 3 chefs’ contributions in their menus prepared in Europe. The ultra rich and creamy foie gras was very luscious on the palate. Definitely an opulent dish fit for royalties… 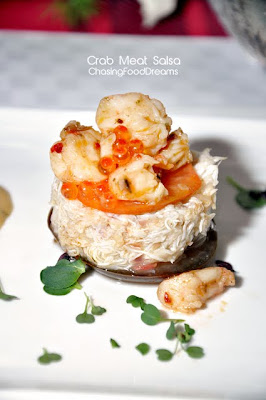 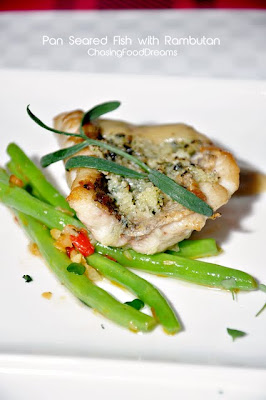 Pan Seared Fish with Rambutan and Crab Meat Salsa sautéed in French Beans and Lemongrass Sauce by Chef Sherson Lian
During an episode in Scotland, Chef Sherson was inspired by the freshness of the seafood near Chanteloup, therefore, the dish was aim to blend the best quality seafood with rich Asian flavours. The lemongrass sauce was Chef Sherson’s concoction and it was definitely a nice fusion of Asian herbs and creamy flavors that went well with the lovely fish and chunks of crab with roes and served on an heirloom tomato. 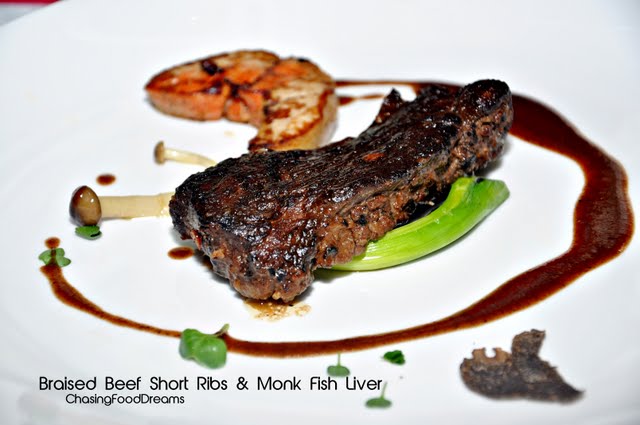 Braised Beef Short Ribs and Monk Fish Live by Chef Johnny Fua
Surprised by the wilderness of Scotland, the scenery, the people and their love for whisky, Chef Johnny created tender braised short ribs to be paired by a creamy almost pate textured seared monk fish liver. Another rich and lavish dish with a unique touch! We ended our menu with desserts from all over the world! Desserts were made by Tanzini’s chef and team under Chef Johnny Fua. 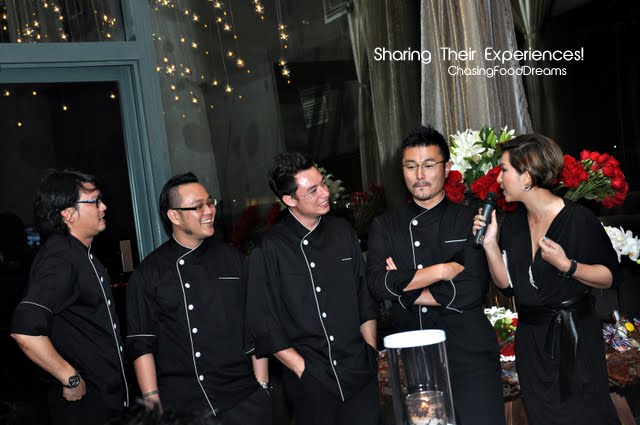 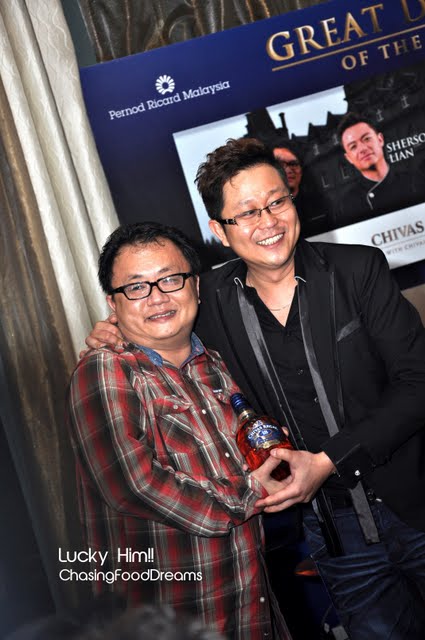 During the dinner, questions were asked to the guest and guess who won a Chivas Regal 18 Scotch? 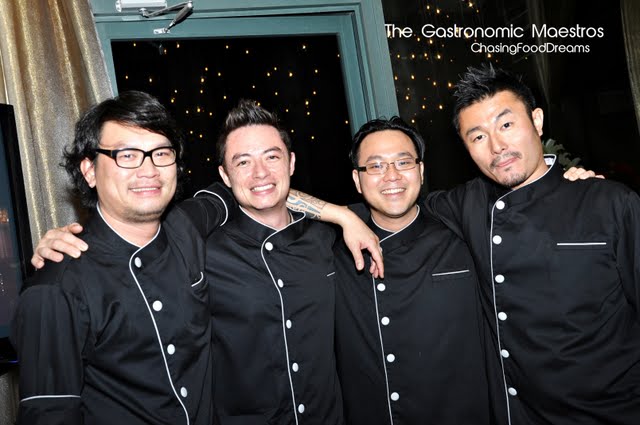 I was mesmerized throughout the night through the preview of the two episodes and coupled by great food and company, the night was simply fabulous in every way! 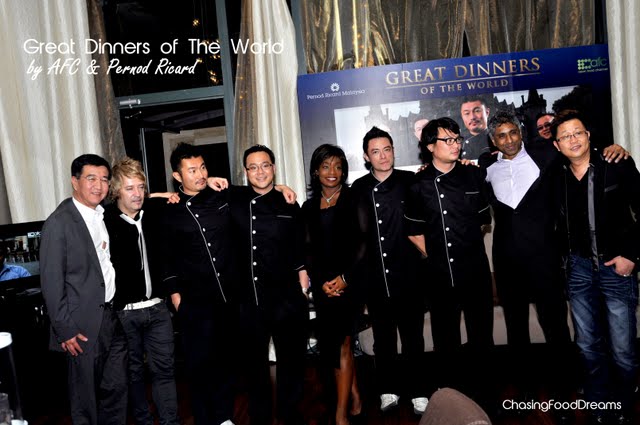 AFC will be launching a microsite dedicated to the production at
http://www.asianfoodchannel.com/greatdinnersoftheworld. The site will complement the series by offering up-to-date information about each as well as in-depth information about each brand of alcoholic beverage that is featured each week. In addition, an online contest where visitors can win tickets to an exclusive dinner prepared by the four chefs will be held when the series premieres in December.
Save the date, you would definitely want to sit down for this!
Great Dinners Of The World
Premieres 13 December 2011 / Tuesday at 10.00pm at Astro Channel 703
New episodes premiering every Tuesday and Thursday at 10.00pm
Episode 1- The Ultimate Tribute Ducal’s Dinner
Episode 2- 1824 Malts That Started It All
Episode 3- Celebrating Pioneering Spirit Of James & John Chivas
Episode 4-Celebration of Pure Gourmet
Episode 5- Connoisseurs Spicy Encounter
Episode 6 – An Asian Gourmet Ritual
*Thanks to AFC, Pernod Ricard and Sid for invite!
** Some pictures are courtesy of Asian Food Channel
Email ThisBlogThis!Share to TwitterShare to FacebookShare to Pinterest
Labels: AFC, Asian Food Channel, Champagne, France, Invited Events, Other Interest, Pernod Ricard, Scotland, Spirit, Travel