I went for a free cooking class compliments of my sister and was taught this really awesome & luscious Chocolate Molten Lave Cake! Made this for Christmas and got approval from my family that this recipe is definately a keeper..

I m sharing this recipe as it has only 5 ingredients and taste like a 5-Star Dessert. Impressive for parties or holiday treats and best of all, easy and can be made in advance. 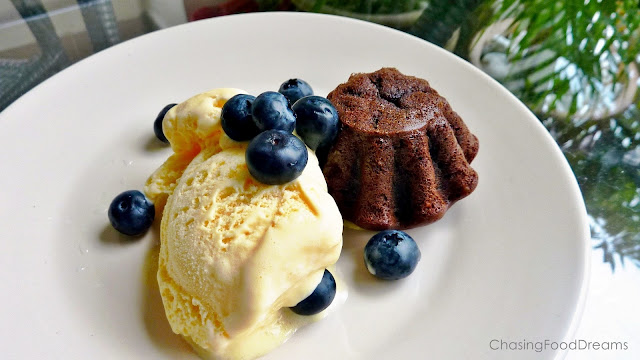 Method
Melt chocolate and butter using microwave for 40 seconds together.
Stir and microwave again for another 30 seconds.
Stir till well combined and set aside to cool.

In a mixing bowl, whisk egg and caster sugar till fluffy. You can also do this in a mixer.
Pour in cool chocolate mixture and stir well to combine.
Fold in flour gently.
Fill batter into a piping bag.

At this stage, you can put this in the fridge if you are preparing this earlier before actual consumption.

Pipe the batter into silicone moulds to approximately 3/4 full. If you do not have silicone mould, please grease the individual moulds.

Bake in convection mode for approximately 12 - 13 mins depending on the size of your mould.
Serve immediately with a scoop (or more) of good quality ice cream.

* If you do not own a microwave like me, simply melt the butter & chocolate using the double boil method as chocolate is very sensitive and may not take to direct heat on the stove.


This recipe is very easy & straight forward but the trick is not to over baked the cake else you will not have a lava flowing out of the cake. Serve this immediately when its hot to get the full experience with a contrasting cold ice cream. Sigh ... (satisfaction = happiness) 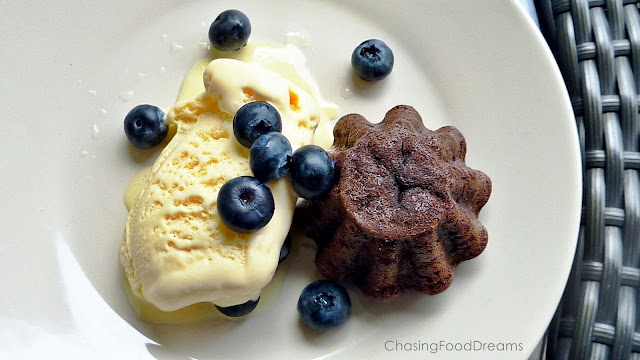 ** Garnish with fruits of your desire. I served this with Cadbury vanilla ice cream to compliment the dark chocolate.

I completely forgot to take a picture of the flowing lava in the cake as I wolfed the cake down because the ice cream was melting fast... hehe (wink wink!)

Make sure to serve this with good quality ice cream as it really enhances the overall experience. I convinced my family with Cadbury Vanilla Ice Cream and they agree that they cannot go back to other cheaper versions.. muahahaha...

Did I tell you I had to quadruple the recipe amount simply because each person had double serving?  =)
No comments:
Email ThisBlogThis!Share to TwitterShare to FacebookShare to Pinterest
Labels: Desserts, Holiday Treats, Recipe

Merry Christmas to everyone..
.. and a short post of my Christmas Breakfast! 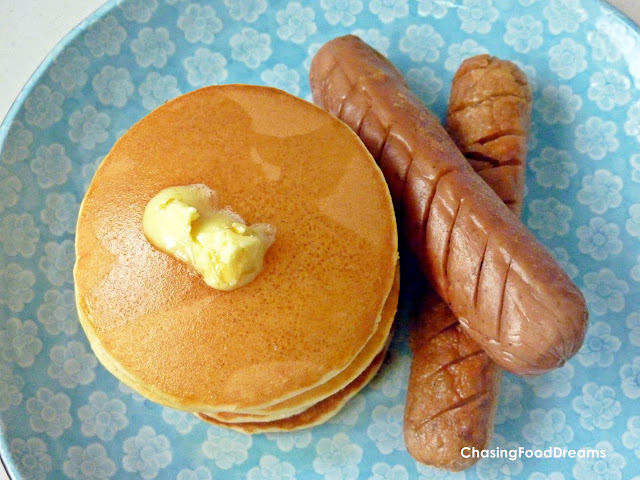 Decided to treat myself to a stack of Pancakes with Hotdogs on Christmas morning. I made the pancakes out of a premix, doused it with butter and Maple syrup and served it with 2 hotdoggies! 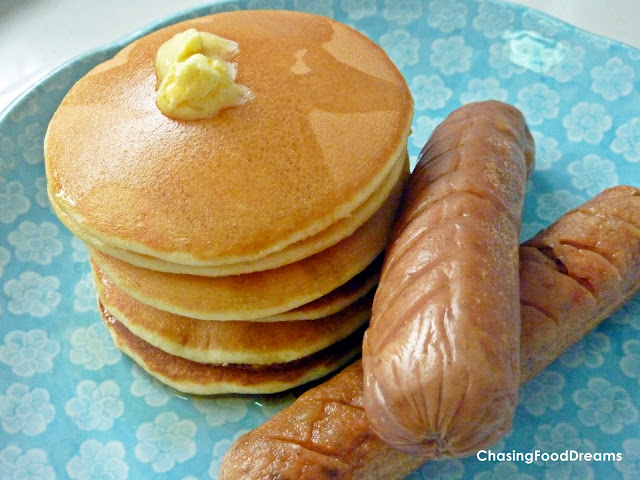 What's not to love about Korea these days.. they seem to have risen and mark their great influence all over the world with their tear jerking and love dramas, hot singing sensations with super bods, fashionistas, gorgeous scenic travel spots, shopping and super-licious food!
Being a great fan of Korean inspirations, I decided to cook up a Korean BBQ party for some friends. Korean BBQ is one of the more popular choices of food influence sprouting up in KL. Well known for its marinated meat and vast amounts of side dishes called “Banchan”, Korean BBQ caters to the delight of all ages and races. Meats and seafood are often grilled on the in-built or portable stoves on the table itself. Most restaurants have their waiters assist in the grilling or one can even request the meat to be grilled in the kitchen to avoid the heavy smoke infusing into its diners’ clothing and hair.

Being a pork groupie, I had two types of marinated pork with one spicy and the second one non spicy. I also prepared beef ribs, prawn and octopus. In addition, I decided to make a popular appetizer Korean pancake, a spicy Kimchi stew and some side dishes. The ever quintessential Kimchi was also present but it was store bought. ( ..too lazy to marinate this as it is now so readily available in our supermarkets =) ) 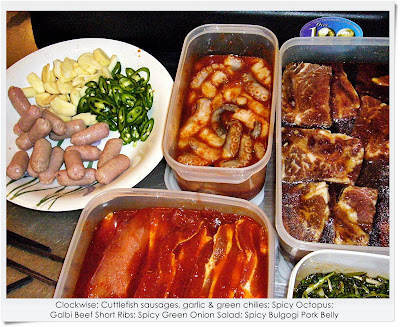 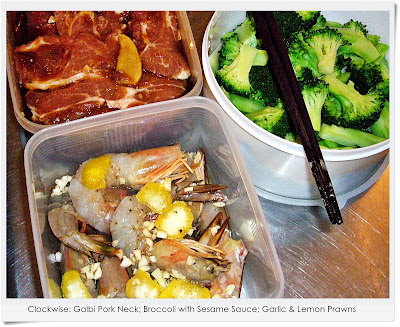 As I was running late, I did not  managed to take much pics. I also had to cook the pancake at the venue as it would not travel well and turn into a soggy mess, hence the team fired up the grill and started cooking the food. 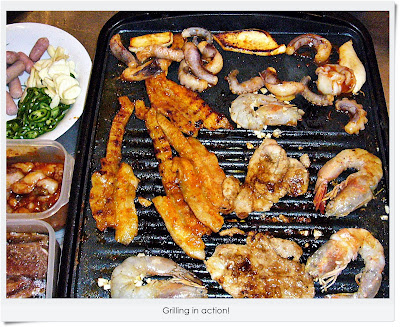 One can easily buy the meat, octopus and seasoning at the Korean grocery shops blooming in Sri Hartamas or Little Korea town in Ampang. I marinated the octopus and pork belly strips in a spicy bulgogi marinate which I bought from the Korean store. For the beef short ribs, these were soaked in a Galbi marinade recipe at the end of this blog. Green onions were shredded, soaked in running water to get rid of the strong smell and lightly tossed in soya sauce, sesame oil and Korean chili paste. 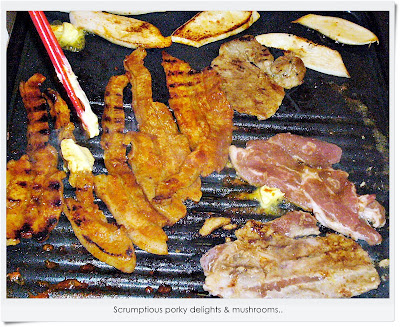 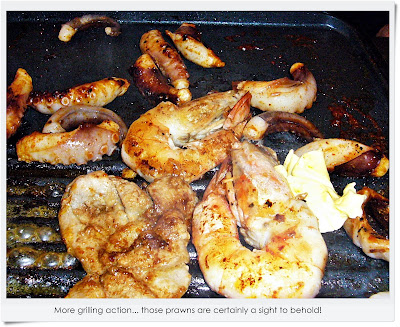 I also marinated the pork neck slices in the Galbi sauce above. For the prawns, I simply added chopped garlic, lemon peels, salt, pepper and olive oil. After grilled, a squeeze of lemon juice will enhance the flavour of the prawns. 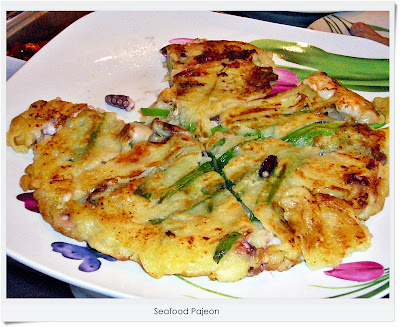 For the Korean Pajeon, I simply bought a Korean pancake mix which one can find nowadays from any Korean store. Simply mixed with water and add in any kind of chopped seafood of your choice. I added fresh baby oysters, prawns and octopus with long slices of green onions. Put the batter into an oiled hot non-stick pan, then sprinkle in the chopped seafood and top with the long green onions. I also ladled some batter on top of the green onions to cover it. If you like a crispy pancake, add more water to make a thin batter. For thicker and dense pancake, add less water. Serve with some sauce mixture of Korean soy sauce, sesame oil and some chili flakes.

meat lightly as sometimes you can find tiny bone scraps sticking to the meat.
In a food processor, add chopped onion and pear, puree finely.
Pour out to a large bowl, add remaining ingredients and stir well.
Marinate the beef for 8-10 hours or overnight.
They cook fairly fast, 2-3 minutes on each side and is ready to be serve.
*Sugar can be cut down if you do not like your meat too sweet.


I did not managed to take pics of the kimchi stew and other side dishes. The team chowed down as everyone was hungry. I think this meal was quite satisfying as the host happily requested for the leftovers.. =)

We went home smelling like Korean bbq but would gladly do this all over again! Drooling about this as I was writing this blog... (happy sigh..)     ;0)
No comments:
Email ThisBlogThis!Share to TwitterShare to FacebookShare to Pinterest
Labels: Homemade, Korean, Recipe

"Have you ever tried Balinese cuisine?" A great friend asked. "I had it only once and it was quite good!" I replied. That sealed our decision to head over to this restaurant highly recommended by my friend who promised me a gastronomical experience in Balinese cuisine.


When one thinks of Bali, one can visualize natural and exotic images of serene greenery and tranquility. The Uma envisions this beautifully in its decor and food. "Uma" translate to paddy field, thus the owner bring into play exotic and tasteful interior of Balinese culture and its natural habitat. Located in the heavily populated shops in Kota Damansara, this hidden gem deserves more visibility than it's food competitors. 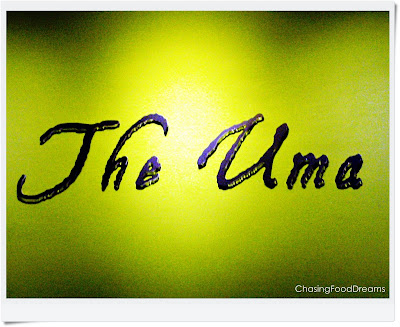 First step brought immediate thoughts of a really romantic dinner with a loved one as the place had a really mysterious aura and romantic ambience with its dim lights and softly played Balinese music in the background. The upper floor is also great for private functions and it features a lesehan-styled outdoor inspired design with paddy field walls. Our friends did the ordering, hence we arrived and literally sat down to dinner. 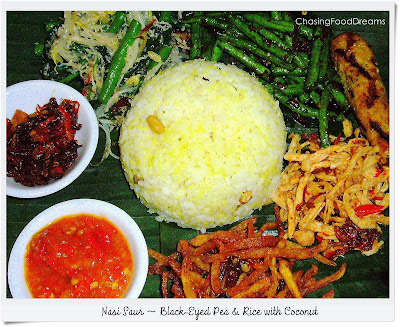 The fish satay was fish paste wrapped on a wooden skewer, grilled to perfection. Balinese mixed veggy salad with coconut shred was good as it was crunchy and satisfying. I also liked the spiced fried shoestring potato fries and shredded chicken as both really balanced the whole rice dish well. 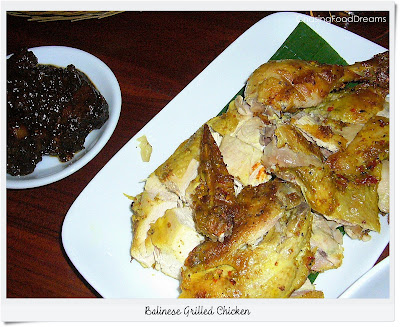 Be Siap Megoreng (grilled Balinese chicken) was next. Half chicken marinated in spices and fried, this dish was average. I also got a taste of Be Celeng Base Manis (Pork Kecap Manis) which I found a bit too sweet for my liking. 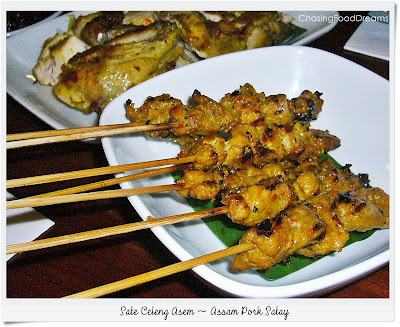 I absolutely recommend the Sate Celeng Asem (grilled assam pork satay). The pork skewers were good enough to be devoured on its own with any sauce as it was well marinated and seasoned. 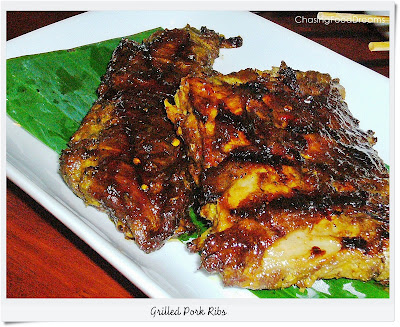 Next up, Grilled Pork Ribs which features two slabs of baby pork ribs marinated with Balinese spices and grilled. The charred marks on the ribs were a beautiful sight to behold! Smokey and sweet, the meat was cooked really well and falling off the bones. I was told that this is not on the menu and the chef prepared it especially for us... =) You may want to ask the chef for this dish! 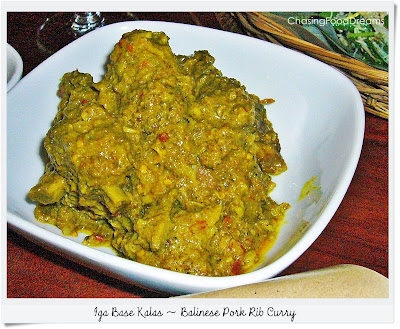 Iga Base Kalas (Balinese pork rib curry) is another well spiced dish with bold flavours in the curry. Pieces of pork ribs braised in fresh spices and coconut milk, the meat was tender and fragrant. 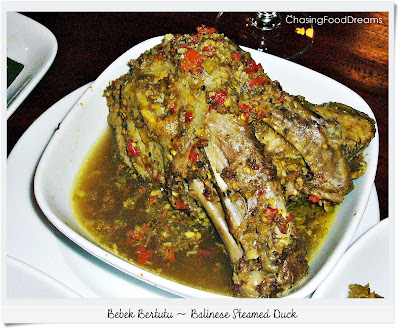 One of the most interesting dish of the night was Bebek Bertutu (Balinese steamed duck). Quarter duck marinated in a very complex spice blend with an interesting taste that grows on you as you eat more, this duck is first steamed for 4 hours and grilled just before serving. I do like this dish in the end as the taste is unique and goes very well with rice. 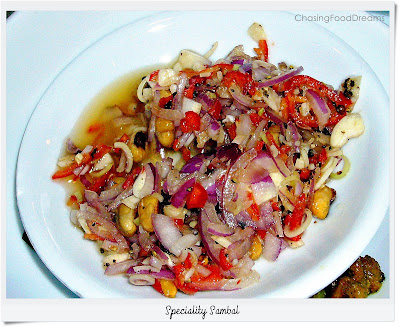 The chef brought out another special Sambal which is also not on the menu. This is my favorite Sambal loaded with shallots, black-eyed peas, chilies and seasoning. Simple and delicious!

As we were celebrating a special occasion, our friends brought his own red wine and a Japanese plum wine. 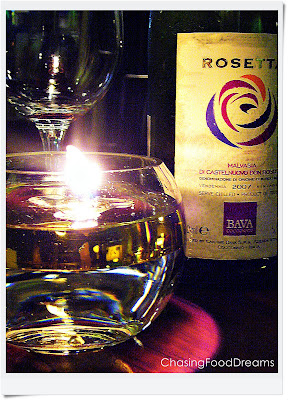 The red wine is unique as it is carbonated. To my delight and 1st time, it is actually quite good! 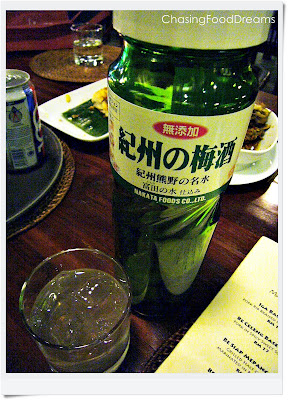 The Japanese plum wine was mixed with 100 plus soda and was not too bad as well.


Great endings to a beautiful meal and Uma proved to live up to its gastronomical authenticity of Balinese cuisine. Gorgeous ambience, exotic decor and genuine simplicity in its food, I will be back!


The Uma also have special lunch offers and price is well worth the overall experience.