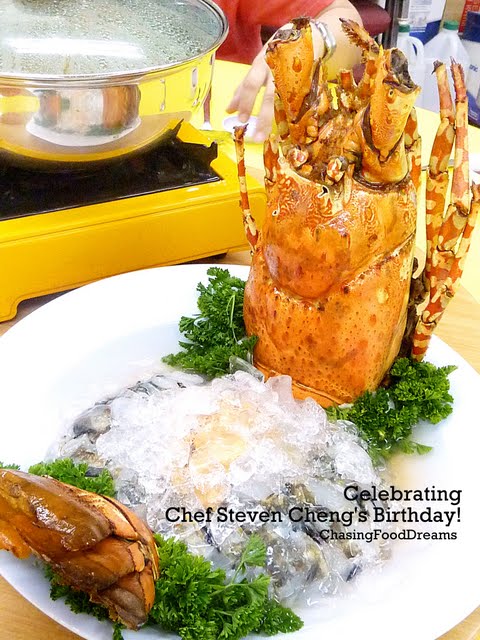 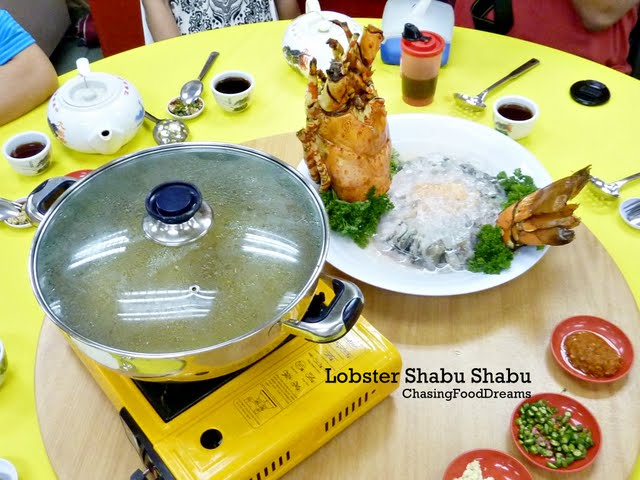 I was honored to be invited by Chef Steven Cheng and his wife for a dinner in late October. Unknown to me, it was his birthday and the Chef Steven wanted to share his special day with us. I met Chef Steven few years ago and our relationship turned into friendship. If you had read my past posts, you would know how I had talked about Chef Steven, a very humble chef who has vast knowledge in the food industry, and his glorious creations of Chinese cuisine. Chef Steven now owns his own restaurant in Prima Sri Gombak also called Mei Six Hin. May Xi Chuan Restaurant is also his family owned restaurant and one can savor several of Chef Steven’s specialties here too at Damansara Perdana. 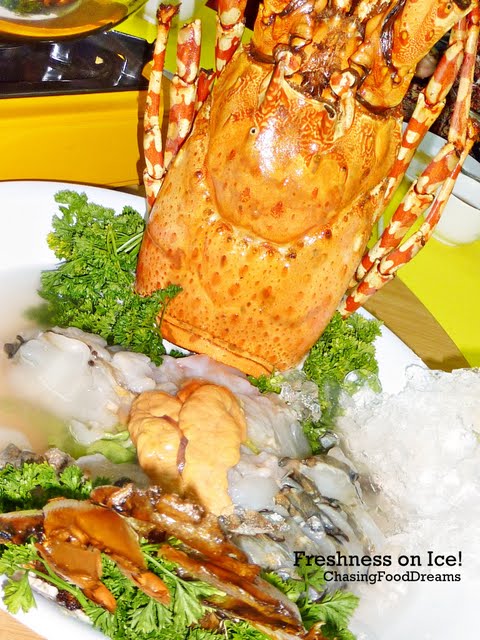 I arrived quite late due to traffic and was immediately gawking at the humongous Fresh Lobster sitting grandly at the table! Speechless as I thought we were just enjoying a simple dinner… J 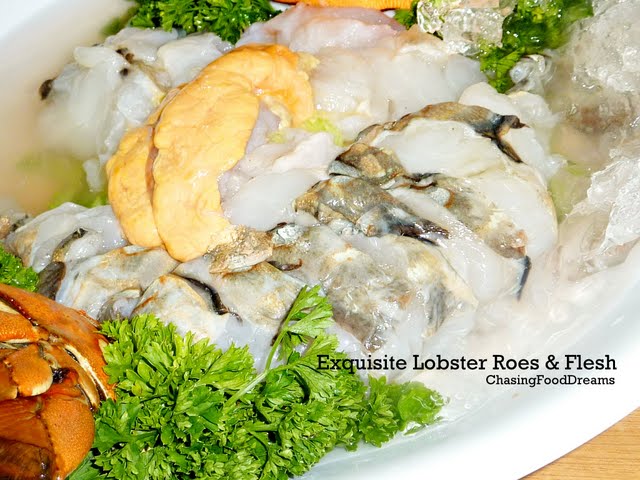 Chef Steven had handpicked the giant lobster himself that morning and the lobster has been de-shelled and sliced up on ice to be served by a steamboat of herbal broth. Here’s my bowl of chunks of fresh and sweet lobster just lightly blanched in herbal broth. I had a nice piece of the lobster roe (which probably busted my cholesterol level for that whole week!) cooked till just done. Flavors were outstanding as the sweet lobster was so tender and scrumptious while the broth warmed my tummy immediately as I was starving from the deathly traffic jam earlier! 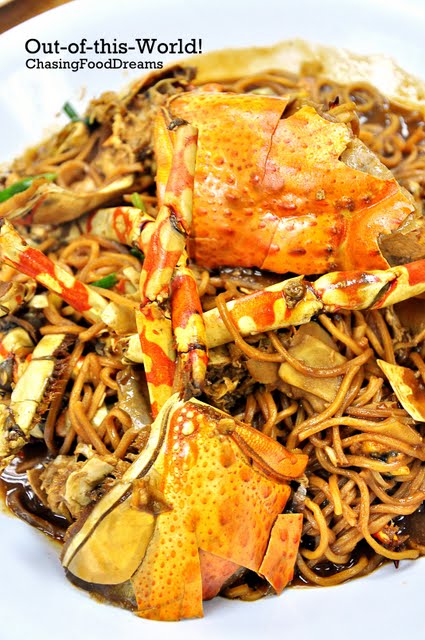 The gigantic Lobster Head was taken back into the kitchen and voila… this appeared… Braised Lobster Head Yee Meen! 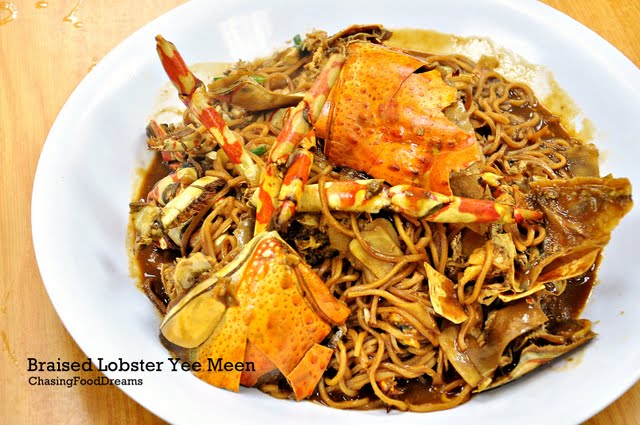 I love Yee Meen! The eggy noodle was braised in soy sauce and the succulent lobster flavors had absorbed immensely into the sauce, lending a lavish and beautiful flavors to the noodles. I had quite a fair bit of this noodle because it was so hard to stop… J
After that heavenly dish, we came back down to earth and savored more comfort food! J 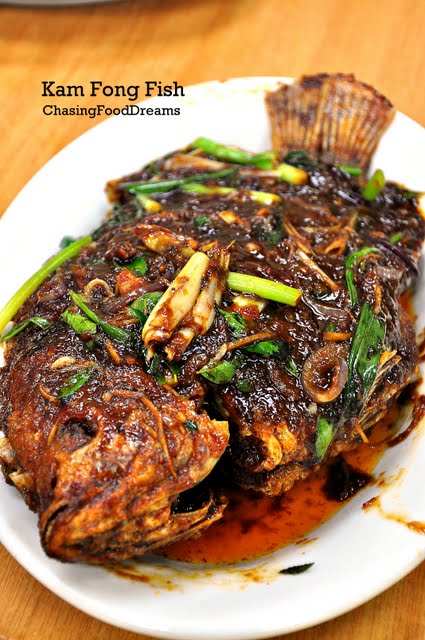 Kam Foong Fish was executed nicely with a piquant sauce of sweet, sour, spicy and savory. The tilapia fish was fried till crisp and the flesh was quite firm while the sauce was addictive with rice. 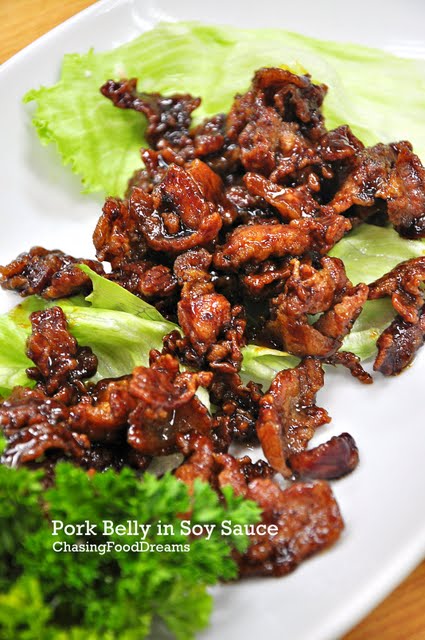 We also savored Pork Belly in Supreme Soy Sauce, a simple but delicious pork dish that has many ardent fan followers at the restaurant. What’s not to love when you get layers of thinly sliced pork belly dressed in a sweet and savory sauce? Goes great with rice or just beer alone!! 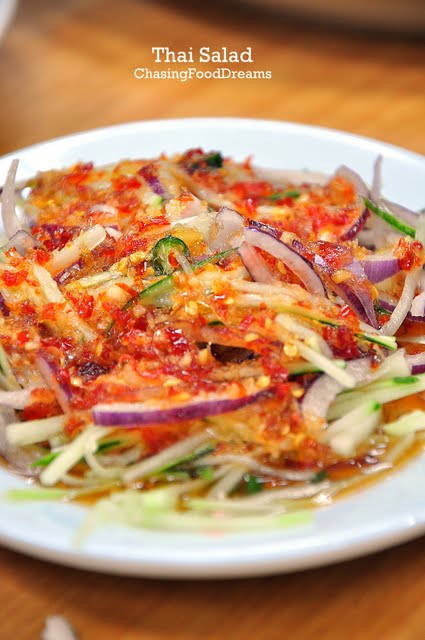 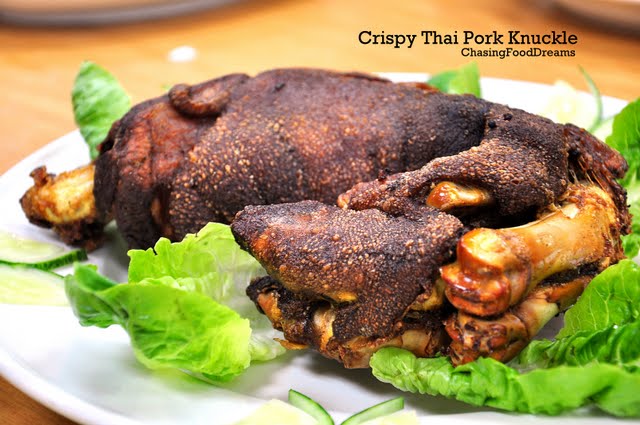 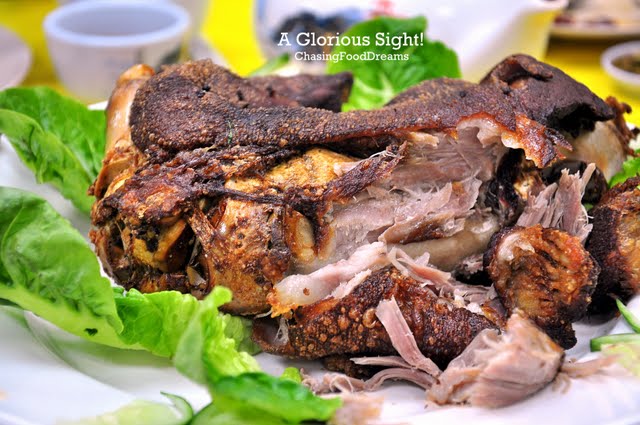 Crispy Thai Pork Knuckle was decent as always. Whole pork knuckle was boiled and then deep fried for a super crispy skin and a moist and tender meat. The flavors were upped further with a Thai salad sauce of sweet, spicy and savory flavors. I think this is a good dish for me to drown my sorrows … hehehe! 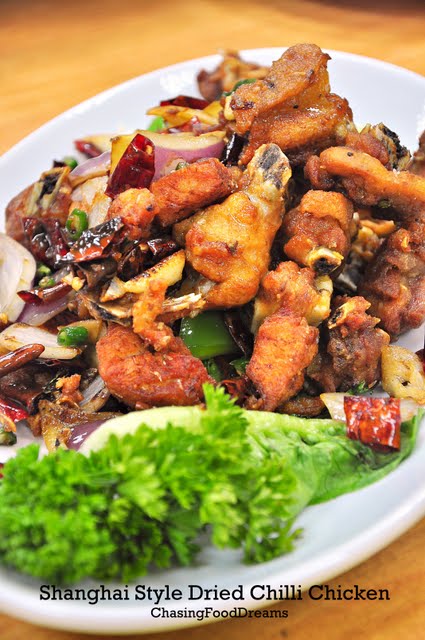 When I dine at any of the restaurant outlet, I must have their signature Shanghai Dried Chilli Chicken!! A Chef Steven specialty, the crispy aromatic chicken is fabulous for its aroma and flavors… J 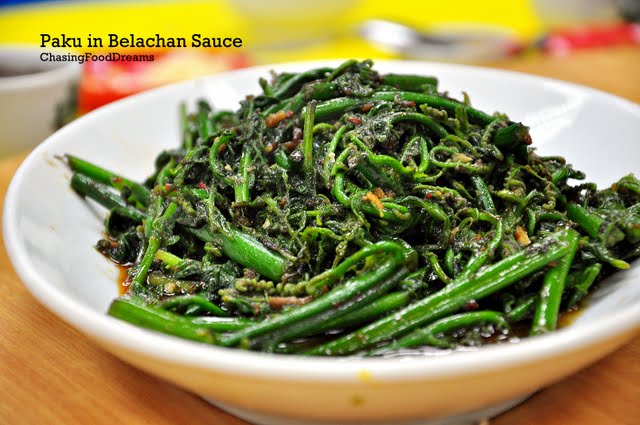 We also enjoyed Paku Ferns in Belachan Sauce which had a lovely aroma of the fragrant belachan and chili! Simple but delectable… 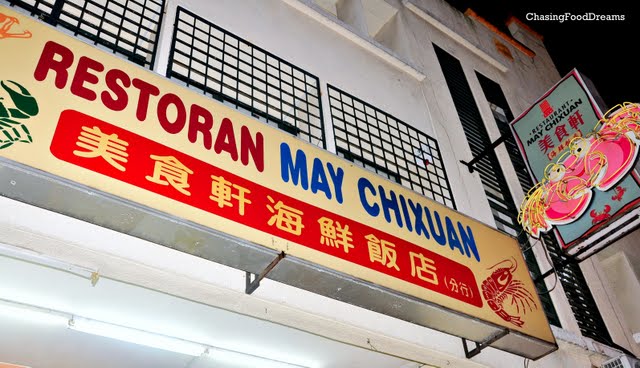 As we only found out it was Chef Steven’s birthday when we arrived, we didn’t managed to get him a cake! The humble chef was also camera shy and didn’t want us to take his picture that day. Life is such, simple pleasures and thoughts will bring people closer… I would like to dearly thank Chef Steven and Winnie for their generous thoughts, friendship and of course dinner!!
*If you wish to savor the Lobster dish, you may call up Chef Steven’s Mei Six Hin restaurant at Prima Sri Gombak at tel no. 017-279 9927 (Winnie) for reservation.
**After our lovely meal, we shared more stories of our common passion which led us to another invitation to savor more new dishes from Chef Steven at his other restaurant. Watch out for the post soon… J
May Chi Xuan Restaurant
21-1, Jalan PJU 8/5F,
Bandar Damansara Perdana,
47820 Petaling Jaya, Selangor D.E.
Tel no: 03-7727 2602
Business Hours: 10.00am - 2.30pm / 5.00pm - 10.30pm
Email ThisBlogThis!Share to TwitterShare to FacebookShare to Pinterest
Labels: Birthday, Chinese, Invited Events, Pork, Seafood, Selangor