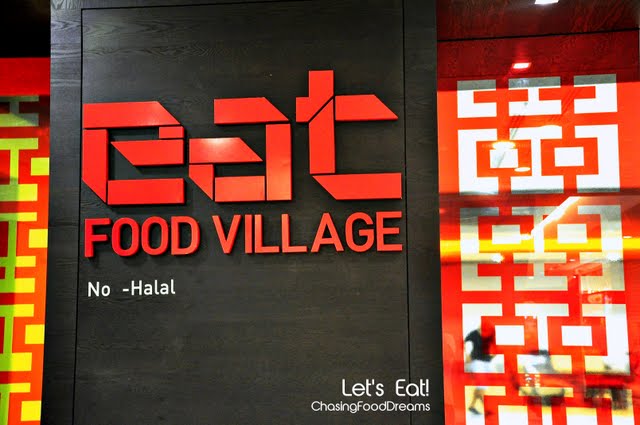 When I heard that several infamous classic hawker stalls opened a branch in the new Publika at Solaris Hartamas, I had already launched my plan to kill two birds with one stone! While planning my visit to the BIG grocery store, I also look forward to savoring what E.A.T Food Village has to offer! J 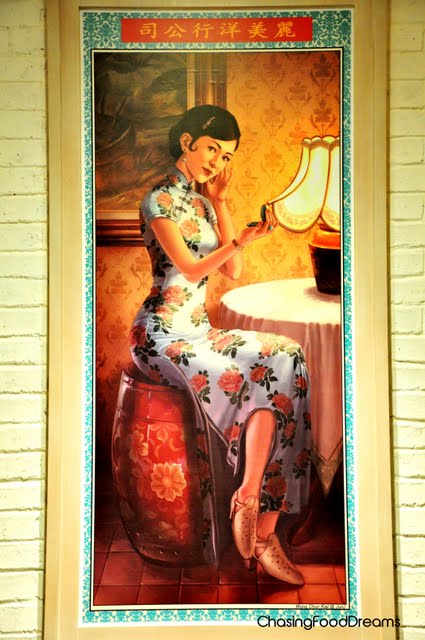 I do have to admit at first glance, E.A.T Food Village doesn’t look like any other food court I have visited. The non-halal food place takes the concept after a chic Oriental classic décor. Walls were adorned with Oriental classic pictures of women dressed in traditional cheongsam with 50s era cosmetics. The cream palette walls were lifted with a mixed of white and dark brown tables and chairs and sectioned with Oriental wood motif panels. 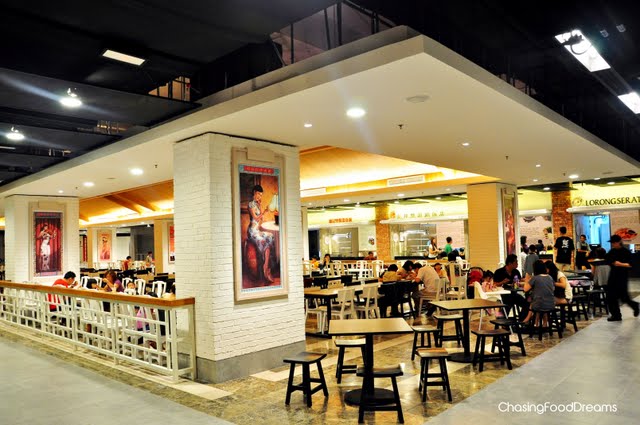 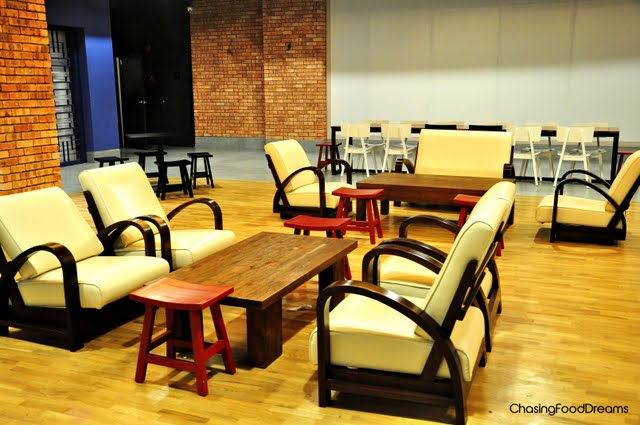 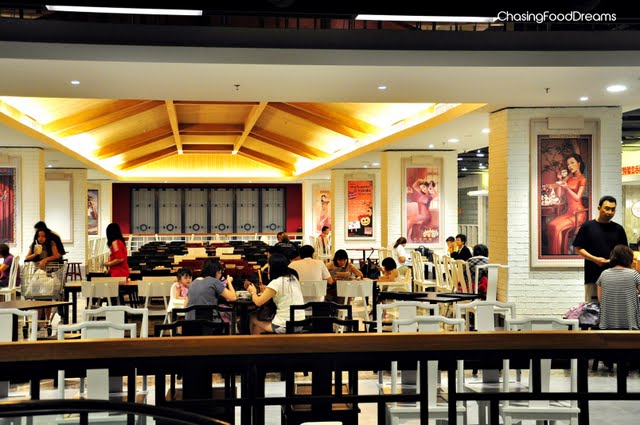 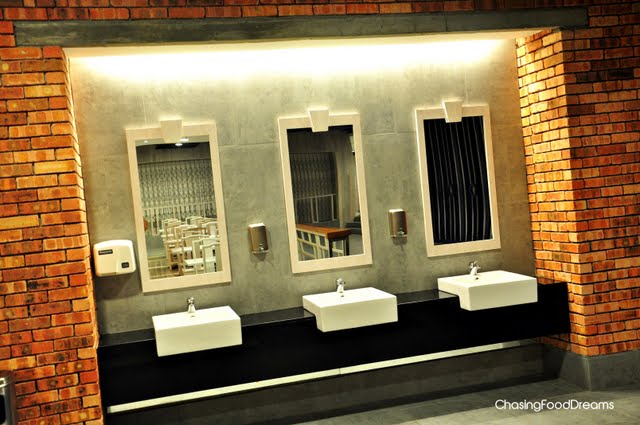 Two rows of hawker stalls lined parallel with the seating placed right in the middle. There was even a lounging section spaciously decorated with sofas and low tables for those intending to chill out with a cup of Chatime! Most stalls have yet to have an owner but the ones occupied are fairly famous for their signature dishes. By the time I wrote this post, I had gone there twice for dinner to sample most of the stalls there. 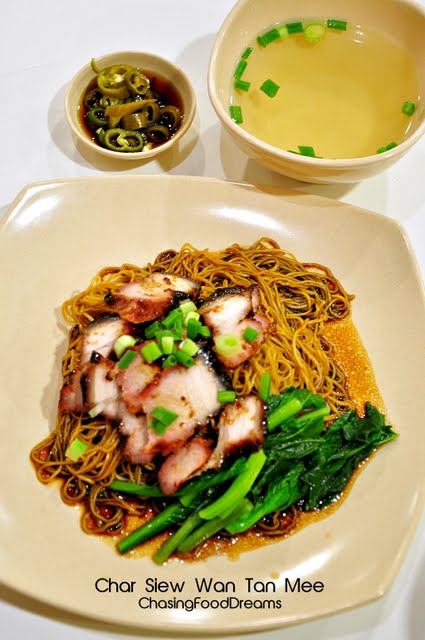 First up was Hoong Kee famous Barbeque meat with wanton noodles. Although it stall was a bit sad looking with just one strip of Barbeque Char Siew hanging in the spotlight, we decided to order their noodles. 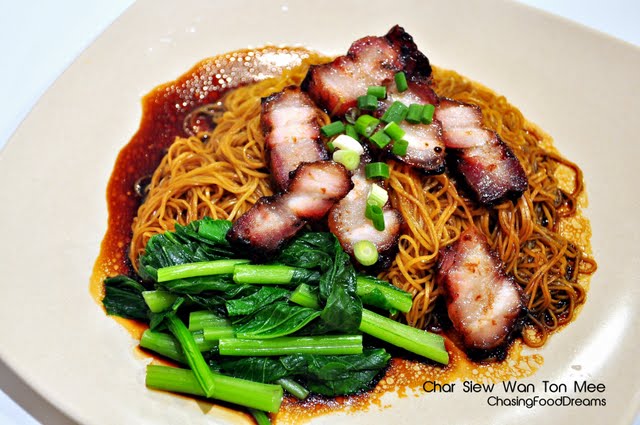 Boy-oh-boy… am I glad we did as the Char Siew Wanton Noodle (RM6.90) is super scrumptious! The noodles had a good bite to it and were so fragrant from the aroma of pork lard. Caramelized sweet and savory pork Char Siew was very delectable as we asked for half lean and half fat. Wanton was nothing to shout about but I could live with it. Dressed simply with vegetable and a sprinkling of spring onion, I have to say that this is one of the best stall there at EAT… J
Ok… I heard everyone raving about Sentul Ah Yap Hokkien Mee and had to find out what the rave was about. My family and I got greedy and ordered three dishes from this stall. 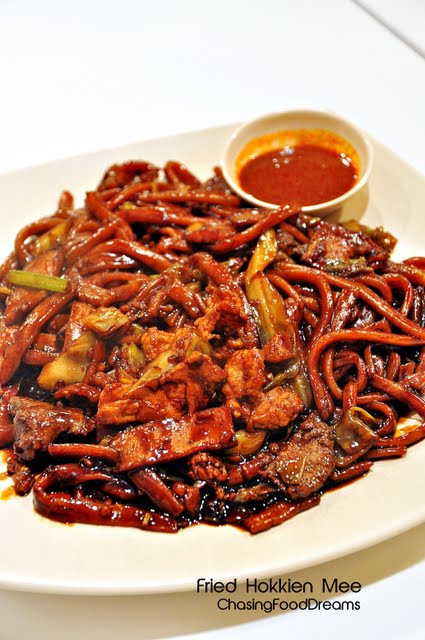 Our plate of Fried Hokkien Mee (RM7.90) arrived full of steamed. The thick strands of noodles were well braised in the dark aromatic soy sauce laden with the essential pork lard. This plate passed with flying colors as it had all the quintessential points that make this a pretty fabulous plate of authentic Hokkien mee. Did I also tell you that the noodles were loaded with sliced pork, squid, pork liver and cabbage?  Enjoy this with their chili paste to heighten it level of scrumptiousness. 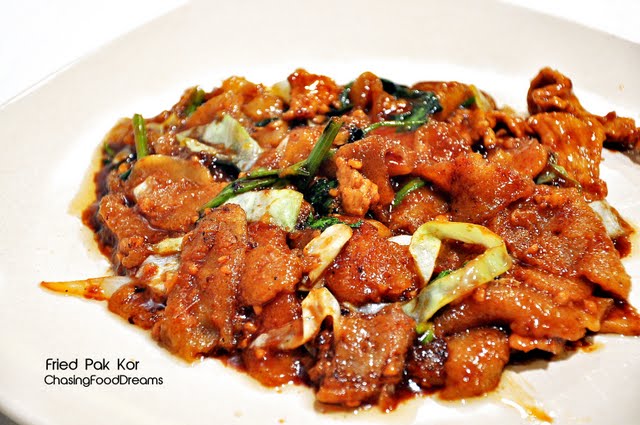 Our Fried Rice Cake or ‘Pak Ko’ (RM8.90) was fairly decent. The pieces of rice cake was soft and sticky, a great sign of braising all the ingredients and sauce to weld a plate of tender savory noodles. This dish had almost all the similar ingredients with an added coriander to bring out the flavor of the rice cakes. 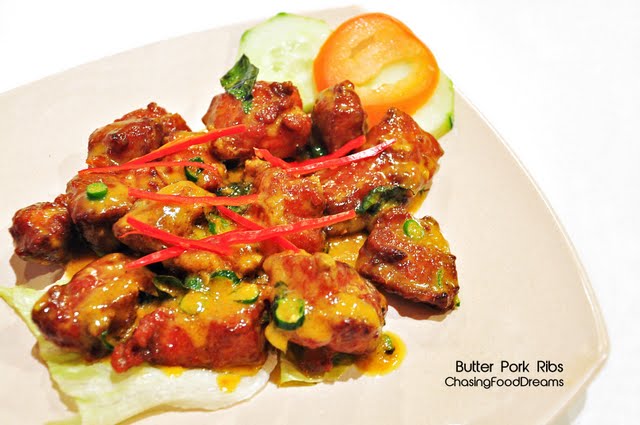 Now let me raved about the Butter Pork Ribs (RM18)! I was deliriously happy with this dish of juicy savory pork ribs, tenderly coated with a very luscious almost sticky golden sauce jazzed up with spicy chili padi and aromatic curry leaves. The ribs were tender but still had a good bite in the meat and the flavors were really addictive. I hogged the whole plate to myself because I just couldn’t get enough of this dish!! 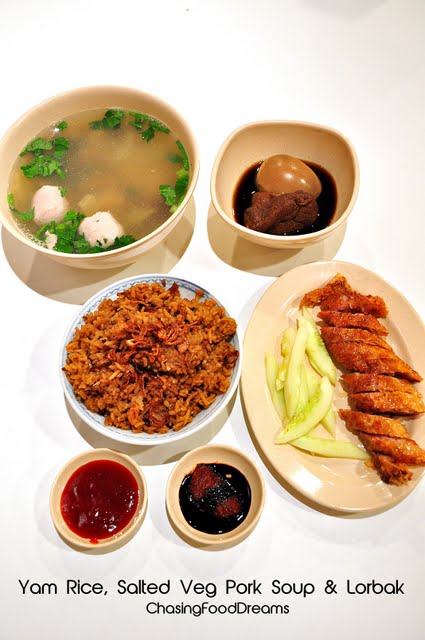 We also ordered a set of Yam Rice with Salted Pork Soup (RM9) from BM Yam Rice. Made famous in Bukit Mertajam, I had the real authentic one there a few months ago. Sad to say, the soup flavor here did not really wow me over. The set meal comes with yam rice, pork soup and a braised egg and beancurd in soy sauce which is a really great deal for that price. Loh Bak was ordered separately. 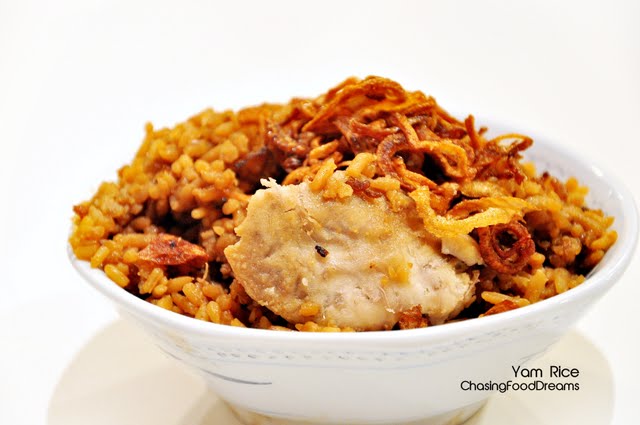 Yam Rice was fluffy and had a nice piece of fluffy and creamy yam topped with fried shallots. I had to admit that the rice was good but could have been better if the soup had tasted better to boost it up. 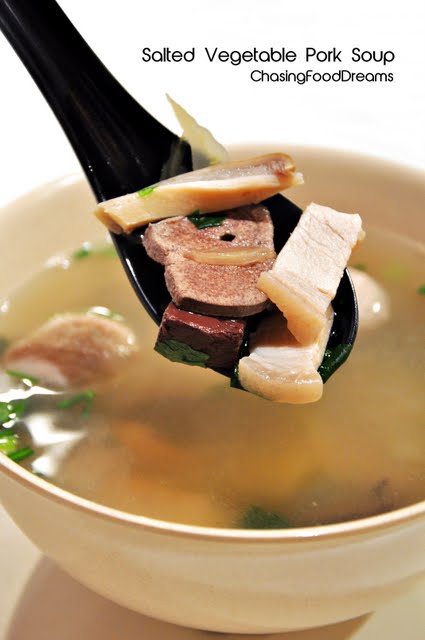 The Salted Pork Soup had chock-full of pork and spare parts with mediocre slivers of salted vegetables. What the soup lacked was the sour oomph I had tasted in Bukit Mertajam, which would have make this my kind of soup since I love sour flavors.  Others who prefer less sourness would have opposed to my opinion on this. 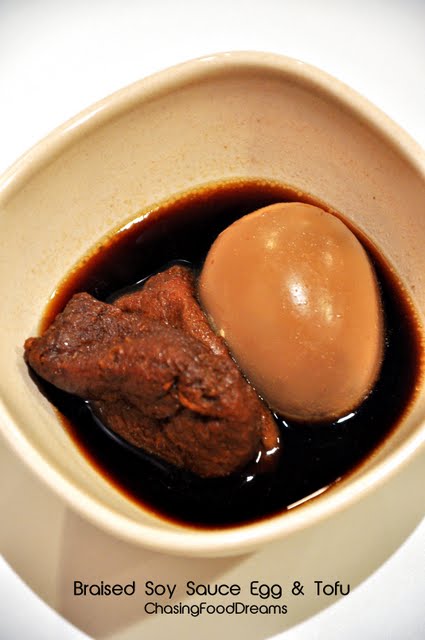 Braised Egg and Beancurd was quite bland. Although the egg and bean curd was well braised, it lacks the aromatic soy sauce flavors that I love. 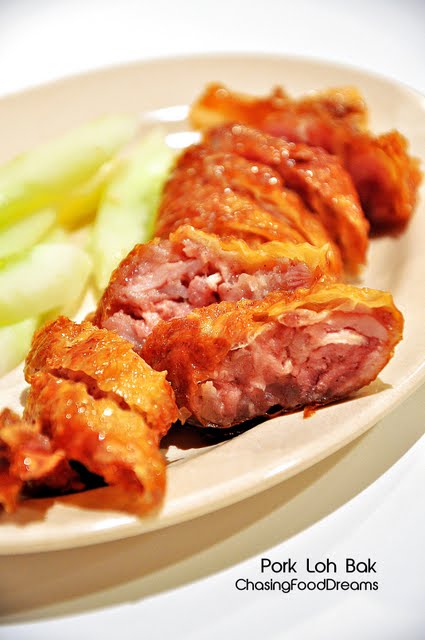 Loh Bak (RM2.50 per roll) was a thing of beauty! This is a huge favorite of mine since I always benchmark my mom’s recipe with any pork roll I try. This one was very good with a great balance of flavors and textures (although my mom’s recipe still takes the cake… hehehe). I would definitely order this again!! 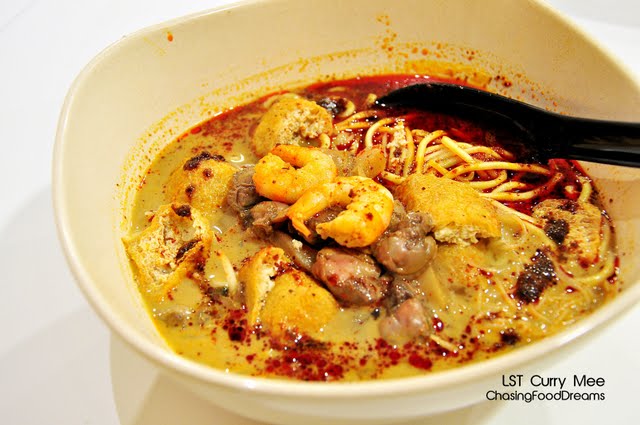 LST Curry Mee (RM8.90) from Lorong Seratus Tahun was only mediocre in flavors. Portion wise it was good as it was overloaded with bean curd puffs (not the Penang kind though), prawns, fresh cockles and brown squid slices. The signature chili paste was quite aromatic but I personally felt that this didn’t quite have the fragrant coconut aroma and taste in the soup. Oh well, I would still settle for this as it was the closest I could get in the city for a piping bowl of hot Penang white curry mee! 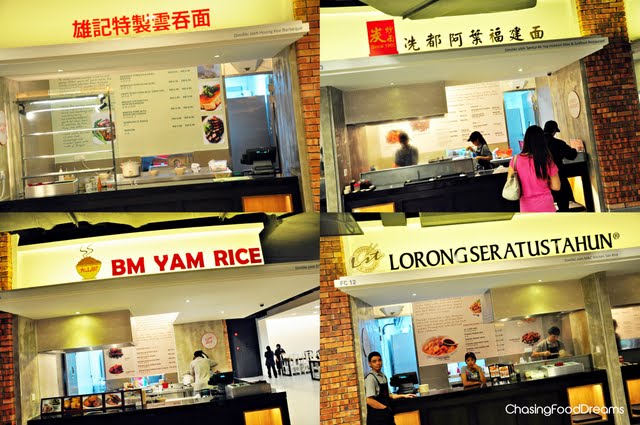 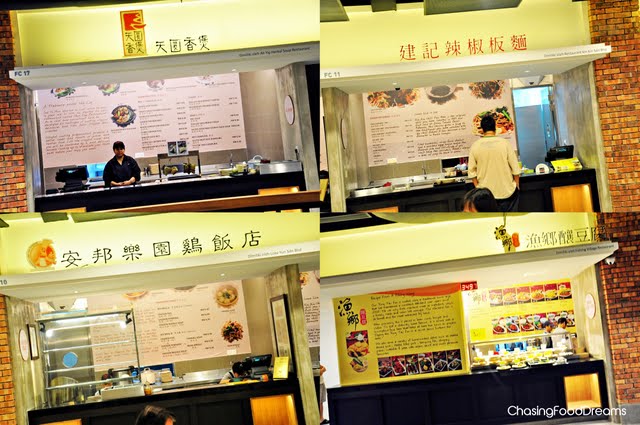 I spied Ah Yip Herbal Soup with offerings like Scallop and Groundnut Congee, double boiled soups, claypots of Ginger Duck Rice, Dong Gui Chicken, Mushroom Mutton Flank and more. There is also the infamous Kin Kin Chili Pan Mee from Jalan Tunku Abdul Rahman where the ubiquitous poached egg is meant to burst and coat the homemade noodles to a silky smooth finish while one heave on its signature spicy chili flakes. There is also Loke Yun Chicken Rice from Jalan Besar, Ampang for poached chicken with its marked ginger and chili sauce. For those who prefer a variety, there is a Yong Tau Foo and Hakka dishes from Fishing Village Restaurant. 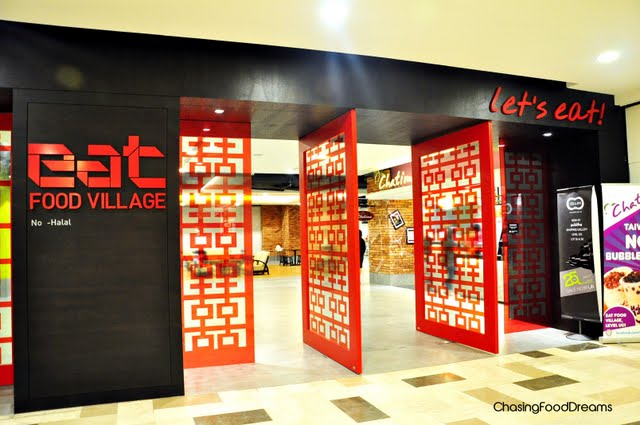 For a food court filled with hogs, I would still rate E.A.T Food Village as fabulously decent with quite a few hits. The prices are surprisingly well valued for the portions and considering the area, I would have to say it’s definitely very decently priced. The whole area is clean and neat and some stalls even have a ‘UFO’ blinker to avoid its customer’s queuing while the food is being prepared. A great place for some decent hawker food with a lovely ambience!!
I will be back for more… J
E.A.T Food Village
Publika Shopping Gallery
Jalan Dutamas 1,
Solaris Dutamas
50480 Kuala Lumpur
*Do call to check out operation time as they are still fine tuning the hours depending on the days of the week.
Email ThisBlogThis!Share to TwitterShare to FacebookShare to Pinterest
Labels: Chinese, Hawker, Kuala Lumpur, Pork