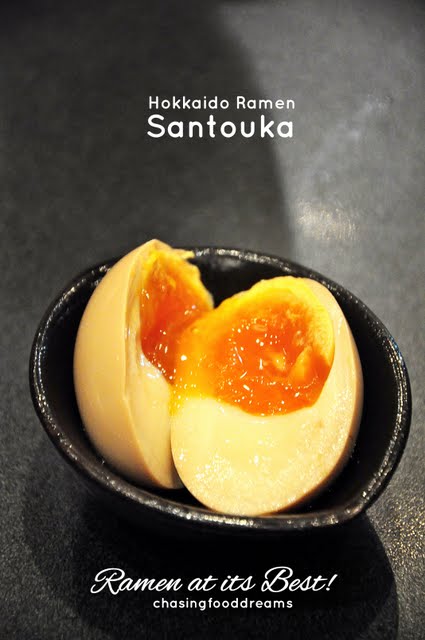 A Ménage à trois with Ramen and Komi Tamago!
Another new found Japanese cuisine has found its way into Malaysia and its here to stay! Ramen is the essence of noodles in Japanese cuisine and although many have tried to impersonate true authentic Japanese Ramen, only minimal restaurants have succeeded in my opinion in Malaysia.  Ramen has a history tracing back to the Chinese origin but it was not apparent when it was introduced to Japan. To read up about ramen, check out Wikipedia here. 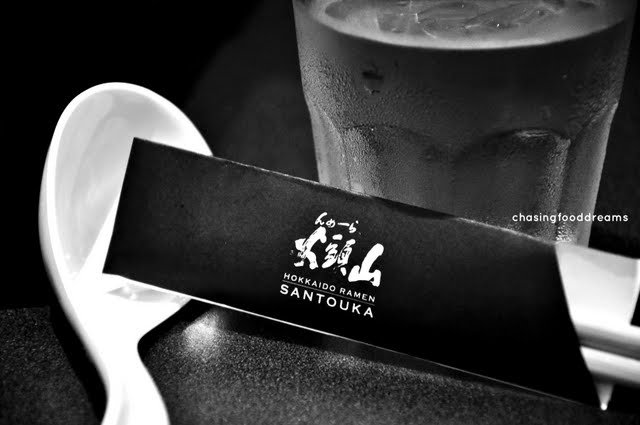 When Hokkaido Ramen Santouka first open at Tokyo Street in Pavilion Kuala Lumpur, news spread like wild fire and everyone braved their way to the city and join in the queue for a taste of authentic Japanese ramen! Raved reviews followed pursuit, hence it was only a matter of time I joined the crowd to see what the rave was about. 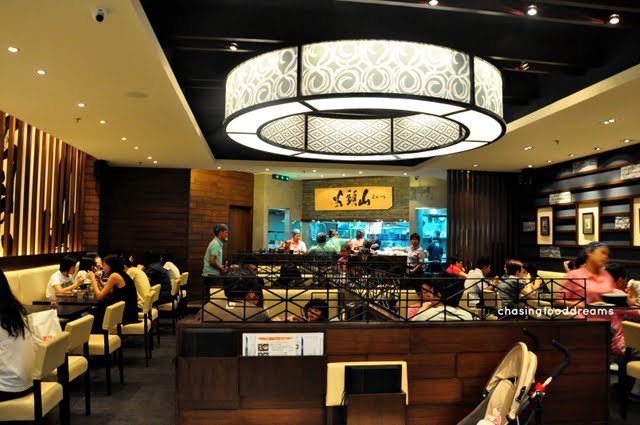 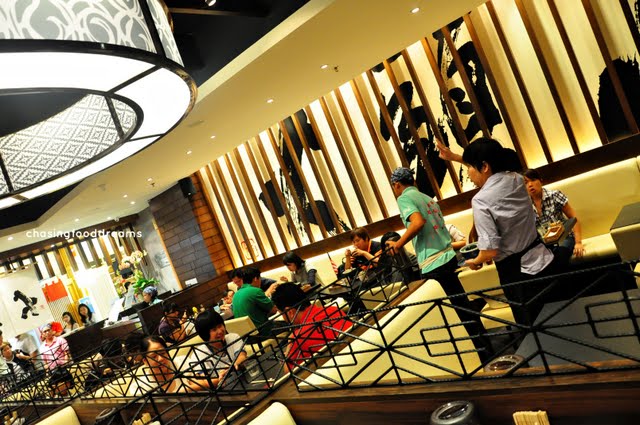 What started as a little ramen shop with only one type of ramen in Hokkaido is now being savored worldwide! I actually had this meal a few months back and never found the opportunity to post this. Upon arrival, I notice how cozy the whole ambience was with its light khaki walls and dark wood and hints of navy blue as contrast. A huge Japanese motif chandelier seeks attention while a glimpse of the kitchen is previewed in the background. Wait staffs shouts out greetings as a token of welcome and bids you farewell after the meal added the traditional Japanese culture to the restaurant. Service was fast and efficient and this is a good sign as the restaurant was bustling with diners and its long queue of customers waiting patiently outside. I had to wait about 15 mins before I was seated and I was there bright and early on a Sunday morning. 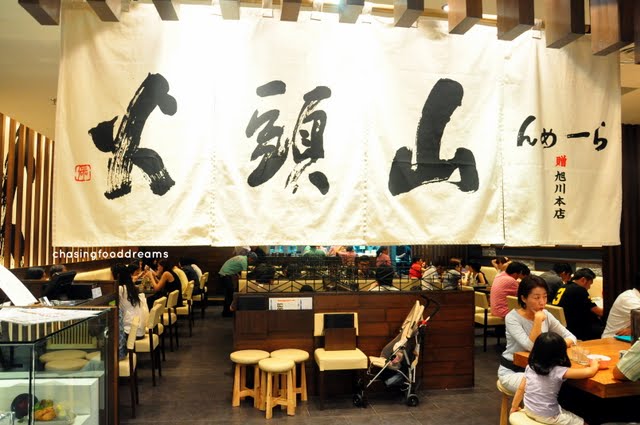 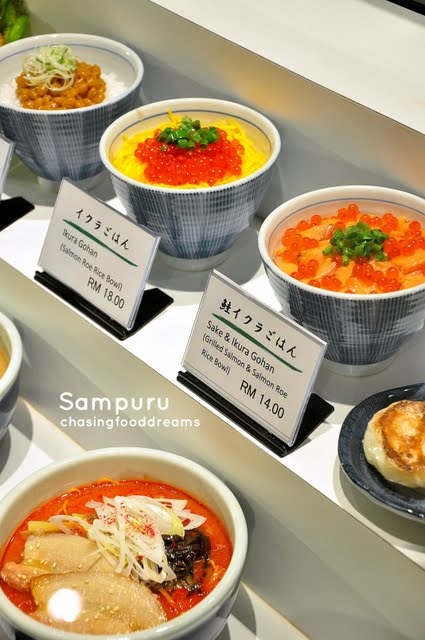 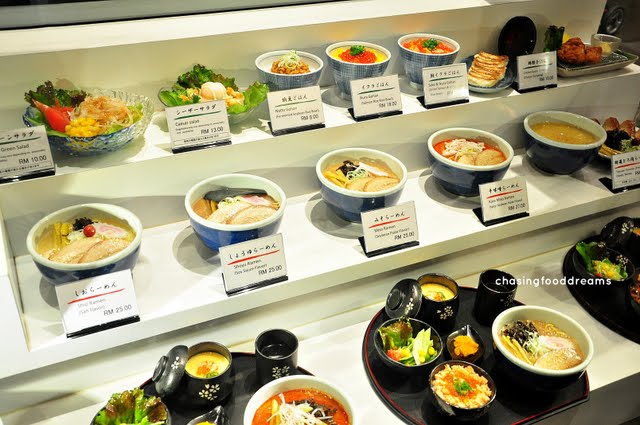 While I was waiting outside, I checked out the Japanese infamous display of the restaurant’s dishes portrayed through the art of Japanese plastic food or Sampuru. The plastic food display is a niche market from Japan and each model is crafted to replicate the exact appearance of the dish. I heard from a Japanese restaurant owner that these cost a bomb (more than RM100 each piece at minimum) as every model is custom-tailored made! 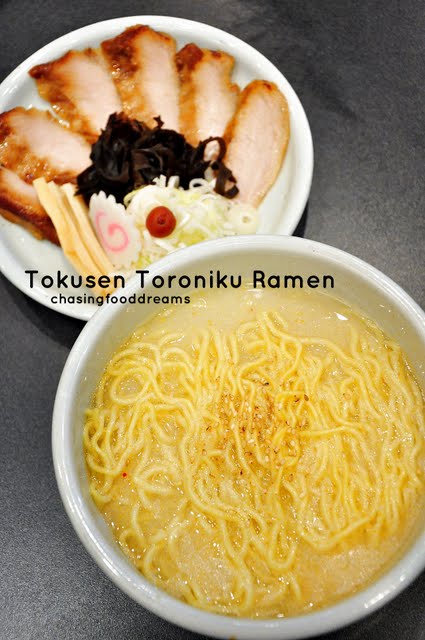 Orders locked and arrive a few minutes later showed service was once again efficient! Since I was out to savor the best, I ordered the house specialty of Tokusen Toroniku Ramen (RM36 – regular). Limited quantity serving per day due to the supply of the premium pork cheeks, it was a no-brainer to order this since I was early that morning! 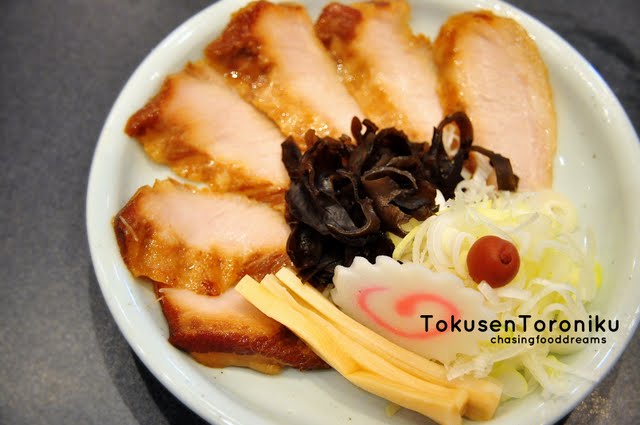 The meat on the pork cheeks is worshipped by the Japanese to have the most tender and flavorful meat and thus, is considered worthy to be savored with the mighty ramen. Each hog is only said to have about 200 to 300gm of this precious meat. The slices of the meat were braised in an aromatic shoyu sauce, lending a deep and earthy aroma to the meat. Tender and fairly moist, the meat had a texture equivalent to the tenderloin but had more flavors. Served on the side with shredded black wood fungus, bamboo shoots, leeks, fish cake and a rosy plum, one was to tip the whole accompaniments to the noodles to your likings! 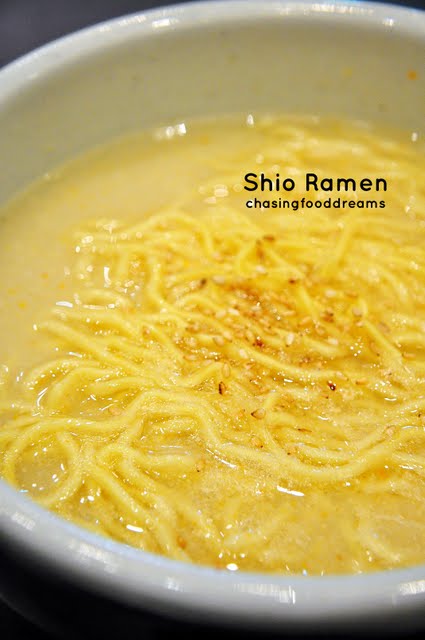 I wanted the original flavor of the ramen that made Santouka infamous, so I had the choice of Shio Ramen or Salt Ramen. The broth amped up with a porky essence was boiled for more than 20 hours according to the restaurant’s proclamation and exuded a lustrous and silky appearance. A sip of the luxurious broth will tingle your senses of an ultra rich, luscious and almost creamy broth. I could identify the salt as the main star of the broth. Yes, a tad salty but it does show off the brilliance of the broth to its max! 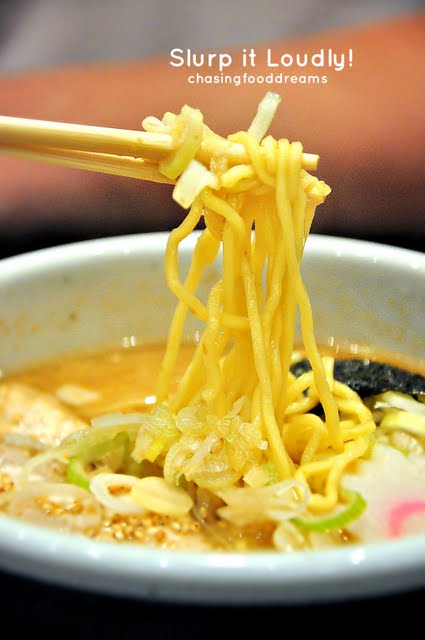 The ramen noodles were equally at par with the fabulous broth. Medium thick, the ramen had a medium bouncy texture and was able to soaked up the flavors of the broth without getting soggy or mushy. I do have to say that fresh ramen tasted more robust than those instant ones and is another plus point for Santouka on why their ramen is so worship by many! 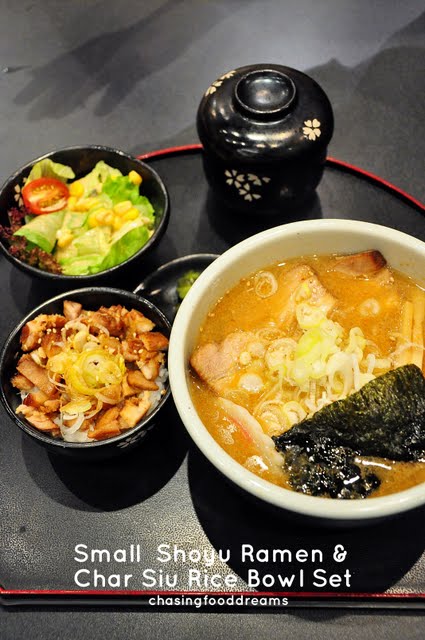 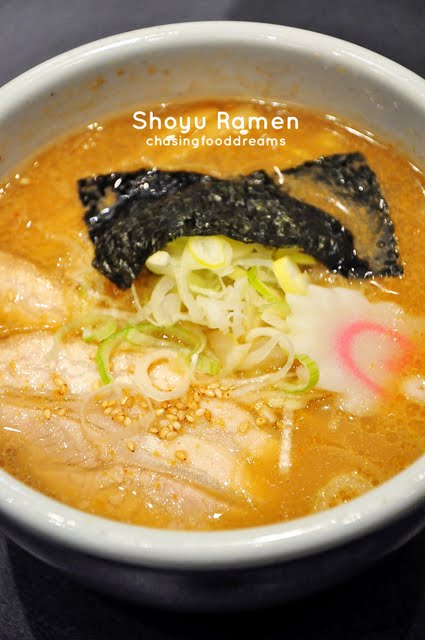 The Shoyu Ramen had the same noodles but with different topping and broth base. Topped with two slices of medium thick char siu, seaweed, bamboo shoot, fish cake and leeks, the combination was a perfected noodle! The shoyu broth had the distinctive taste of shoyu and was another luscious broth in its own category. Equally creamy and ‘thick’, the broth was also a tad salty for my taste. Don’t get me wrong, apparently this is how it should taste according to a Japanese food connoisseur who I had the opportunity to dine with in another ramen outlet overseas a few years back when I had my first taste of authentic ramen. 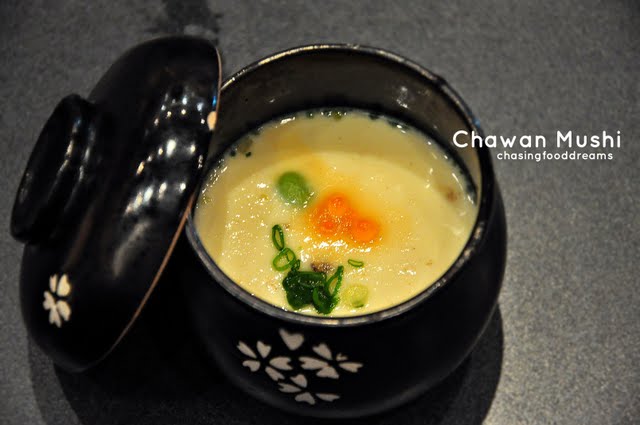 Char Siu Rice faired mediocre. Simply the same cut up pieces of braised char siu topping white rice. A bit dry since there was no sauce on it. I do like the simple corn salad and the Chawan Mushi was quite perfect with its smooth and egg flavors. 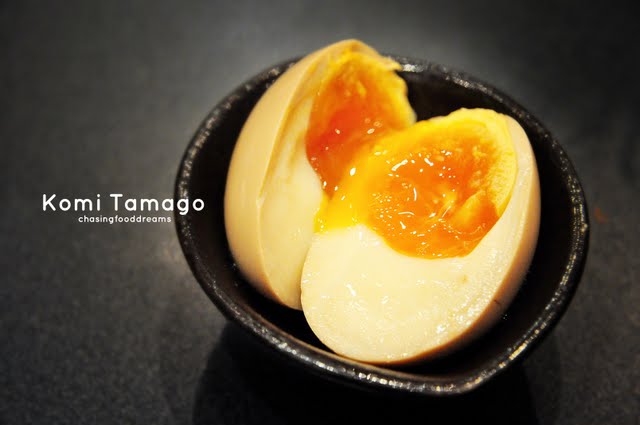 The pièce de résistance of the meal was a stellar snack in the form of Komi Tamago (RM2 each). It never fails to amaze me that the simplest thing in life, in this case an egg, is ultimately the pleasure on my palate! Served cold, the egg was soaked in a dark sauce to taint its egg white to a light brown while the golden yolk remains a thick luscious gold liquid. Popping half the egg in the mouth is highly recommended for that opulent sensation of a firm and silky texture in the mouth!! My partner had to stop me from ordering a few more of these sumptuous eggs… J

Being the gluttons we portray, we had to add in an order of Chicken Gyoza (RM10), simply because we saw almost every table had one! 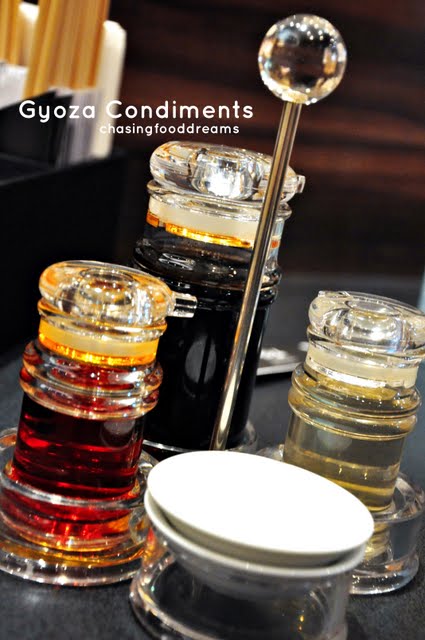 Condiments were placed immediately on our table and the wait staff politely informed us to mix a little of shoyu, vinegar and chili oil together for the dipping sauce. 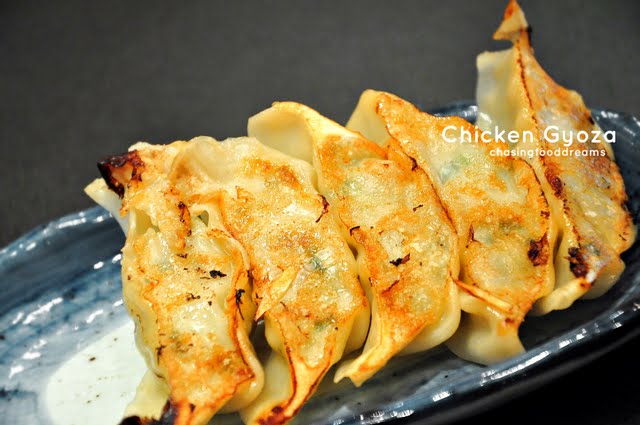 Five fragile looking pieces of Gyoza were neatly arranged in a row and sear to a crisp on its base. Minced chicken and bits of vegetables were detected but this one was a letdown for me as it was a bit too mushy in texture and flavors. The overall was just forgettable in my opinion. 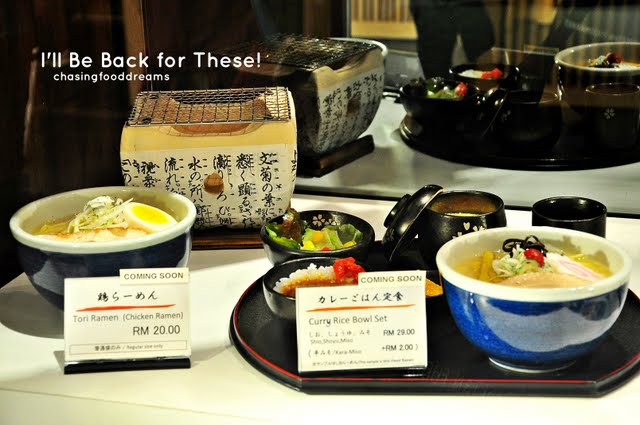 Nothing could deter me from planning my next visit for these dishes coming soon. 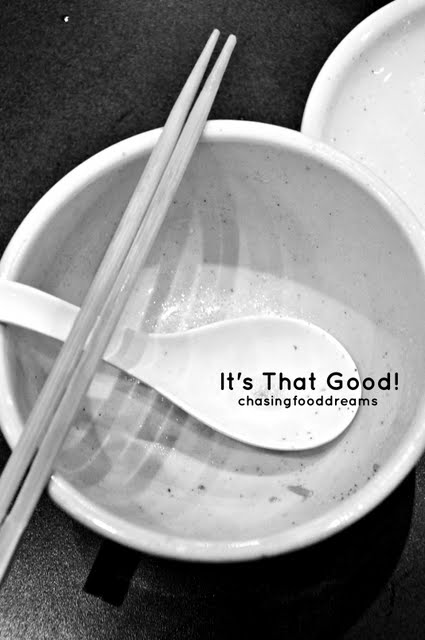 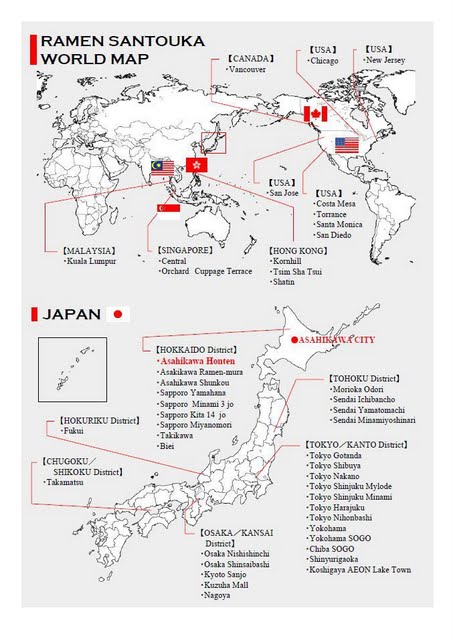 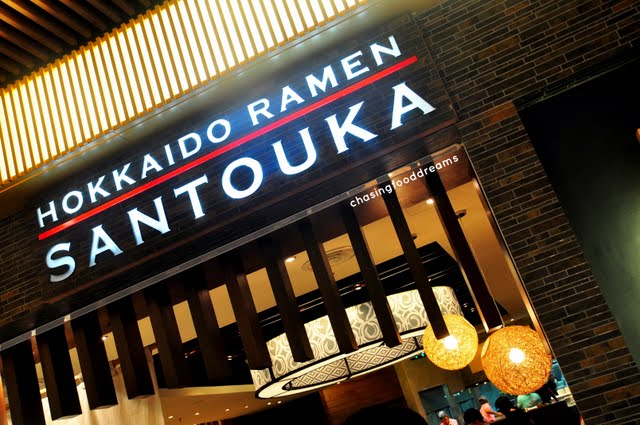 I finally understood the rave reviews and I have to join the crowd to say that this is the Best Ramen I have had so far in Malaysia! Santouka certainly lives up to its promise of an authentic ramen in luxurious broths. The Komi Tamago was phenomenal and stole the show for me. As premium quality is obvious, price is also on the higher end for the bowl of noodles. I felt very comfortable at paying the price as the dishes were deemed worthy in every sense. Santouka may not be a daily affair for me but it definitely warrants a medal for making my day that Sunday! 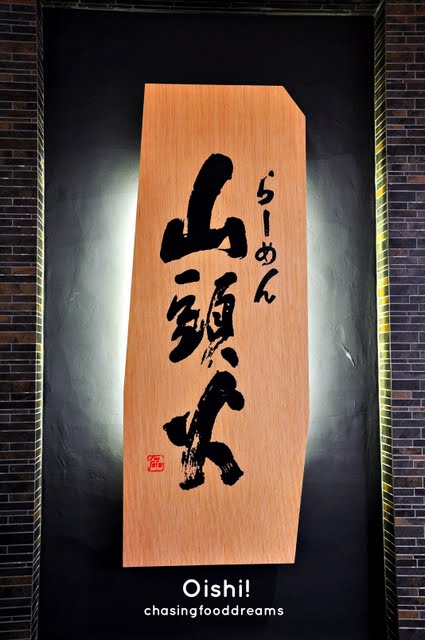