Don't you just love holidays! Eat, time to rest (or rush), eat, spend time with loved ones, and eat more...

I think I spent my last few days of 2010 just simply resting (sore throat and eye infection) and eating like a pig despite not feeling well. Food always cheers me up and is my natural "medicine"... ;P

To celebrate the end of 2010, my family did not make any reservations, hence we decided to take a chance and go early to the nearest restaurant around our area. Lucky for us, there was still one table left at Silver Spoon when we walked in but most of the tables were reserved.

Due to the holidays, the considerate chef Ken decided to serve a New Year's Eve course menus and limited dishes to ensure that the quality and quantity was well controlled at Silver Spoon Trattoria.

Busy as they were, our orders were quickly taken and logged into the kitchen. I have to praised the servers as everyone was cheerful and helpful despite the crowd. Service was excellent and I hope they keep this up as this is really a quality that most restaurants fail to have.

Back to food, we opted for ala carte. First up, our appetizer of Arrancini and Fried Cheese (RM22) were served within minutes of our ordering. Both served on a rectangled platter, presentation was simple and gorgeous. I had to take the pictures with the restaurant's dim lighting, hence some pictures looks over exposed with my little dingy camera. 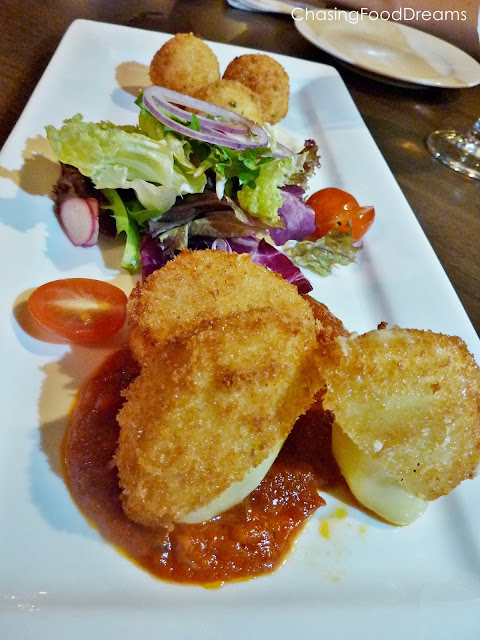 Arrancini or arancini (named derived from Italian word for orange because it looks like one), are basically fried rice balls coated with breadcrumbs. These are said to be originated from Sicily, Italy. Crispy and golden, these were similiar to risotto, another italian rice dish except that they were fried. Fried Cheese was another fried item with breaded cheese. I forgot what cheese but it did tasted like Brie. Silver Spoon really did a great job on these little ballicious beauties... 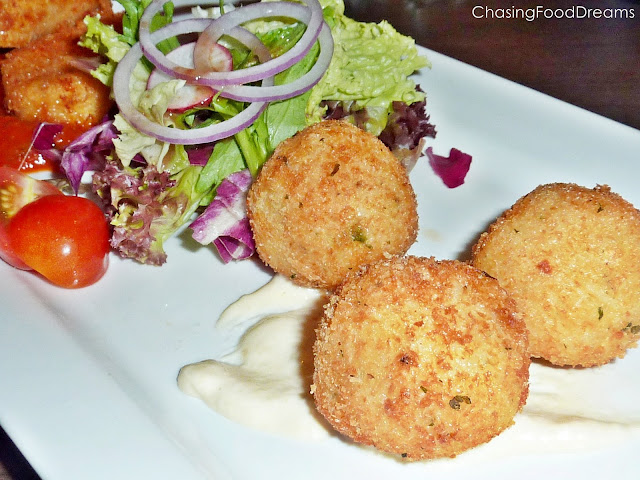 Fried to perfection, the insides of Arrancini were meltingly tender and encaved a very moist cooked rice in a creamy cheese sauce. Served with a dollop of mayonaise like sauce, these were scrumptious and irresistible. 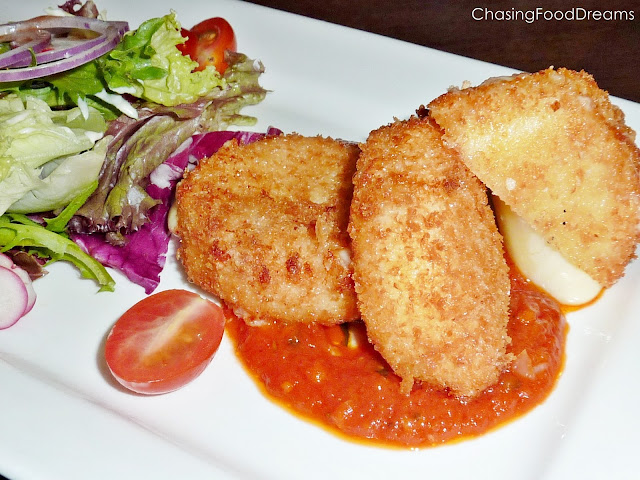 Fried Cheese was average as it was pieces of cheese breaded lightly and fried till the cheese was melting and oozing out. These were served with a house made tomato sauce.

I prefer the Arrancini over the Fried Cheese simply because the former had more taste and texture over the latter. Both could use more sauces as there simply wasn't enough sauce for that portion.

For our mains, we ordered a Seafood Risotto, a Pesto Linguine with Scallops and a Calzone from the ala carte menu.

Risotto is an italian short grain rice cooked in broth to a creamy consistency. The techinque to this luscious dish is to cooked it slowly and adding broth in small quantity to release its starch to give the rice its signature creamy texture. Most popular added ingredients are cheese, mushroom and seafood. 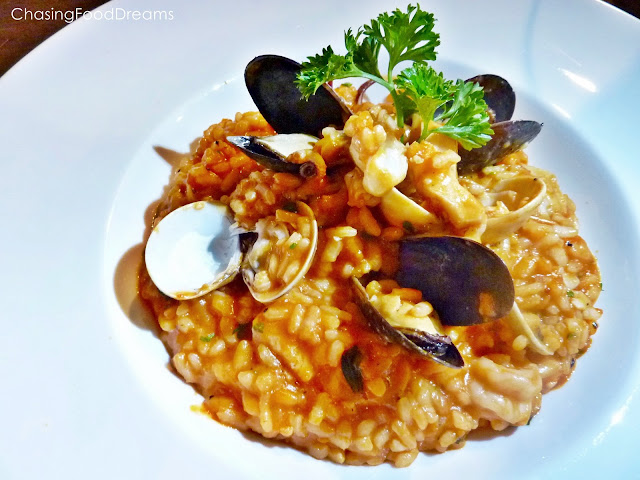 Seafood Risotto was the most enchanting dish of the night at RM29. We had to fight over this dish for every last grain on the plate. Everyone unanimously voted this as the best dish of the night! Silver Spoon did real justice to this dish as it was every bit creamy, tasty and cooked to flawless. Seafood was really the star and one can really taste a lot of freshness and delightfulness in this risotto. As you can even see in the pictures, the chef put in a lot of seafood as I could taste this as equally as rice. There were squids, mussels, clams, prawns, and fish, all simmering in harmony with the perfectly cooked rice, which is still al dente till we ate up the last bit of it. I have had bad risottos before and I ll tell you that mushy flavorless rice is certainly Not pleasant.


Pesto, which means to pound or crush in italian, is simply a green sauce derived from blending several herbs, nuts, garlic, cheese, and quality olive oil. There are many versions of pesto today and not all are green depending on its ingredients. 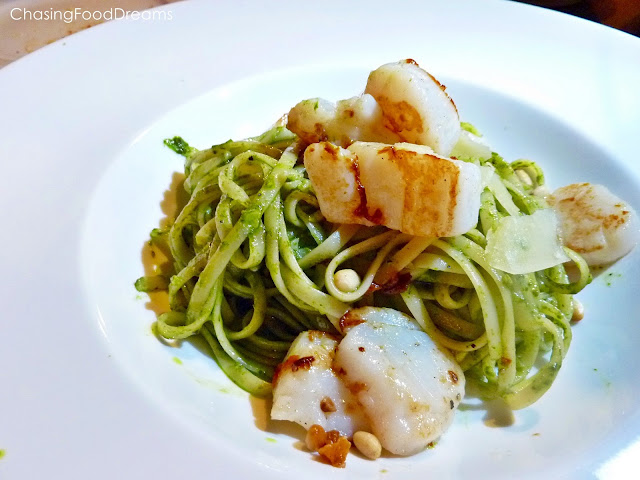 A good pesto means good quality ingredients and olive oil. You can certainly taste it here in this dish of Pesto Linguine with Scallops (RM29). Scallops were a bit undercooked but to me its ok as I rather have it under than over cooked. Very simple and satisfying with its down to earth taste.


Calzone, meaning stocking in italian, is a folded pizza. Just imagine what one can stuffed into a calzone as the choices are so extensive. More common ones that I have eaten in US are usually meatball, cheese and ham. 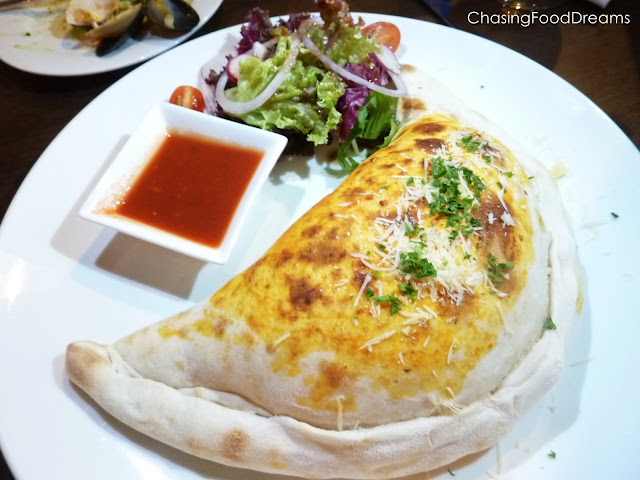 When I saw the Calzone (RM 25), I was really happy with the puffyness of the dough as I immagined it being over stuffed with ham and cheese. However, when I cut into it, it kind of left me flat. See next picture on what I meant. 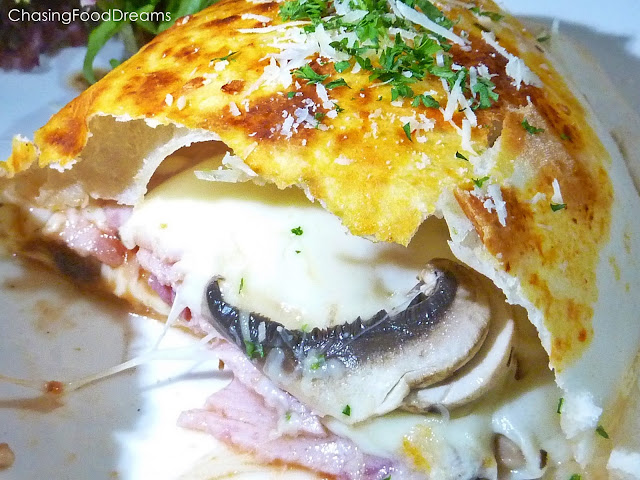 Stuffings was less than half of its height and it was half air. Sigh... lesson learned, looks are deceiving.. Tastewise, this was so so as it was simply a piece of ham with cheese and bits of mushroom. Tomato sauce on the side did not do any justice to this dish.


Desserts are this place are infamous! I had put in our order of Tiramisu earlier to avoid dissappointment. :)

Tiramisu is one of the most popular desserts from Italians' contribution of gourmet cuisine. Consisting of italian sponge fingers, soaked in coffee and liquor, layered with a whipped mixture of mascaporne cheese with whip cream and lightly crowned with cocoa powder. When done perfectly, this dessert is even said to increase a man's energy to his delight! (read that somewhere in a magazine, not sure how true it is though.. hahaha) 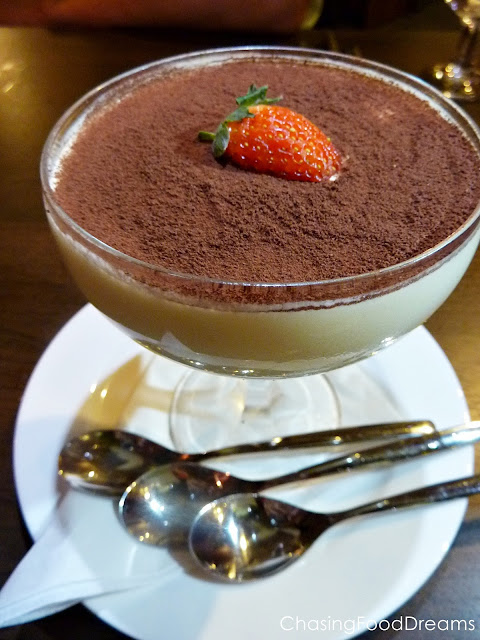 I have mentioned about this Tiramisu before and Silver Spoon's version is really luscious (RM16). It still is that night but my only gripe is that the alchohol presence was kind of missing. Maybe they ran out of liquor due to the holidays! Still, this Tiramisu is smooth, creamy and awesomelicious! (.. see one dessert with three spoons? good stuff are worth fighting for! hehehe)


After Silver Spoon, we went to countdown at Desa Waterfront City where a live band was rocking the ambience! There were also many stalls of fun and games and more foodie stalls.... to keep the party rocking till countdown time. It was certainly a night to remember.. bye.. 2010 and hellooo 2011!