“Watcha doing on Sunday? “ asked my friend. Before I could answer, he said “Wanna go pig out?”  Being a huge fan of the dearly beloved pork, how can I refuse… kekeke! This triggered the pig out session (literally!) at a new Bak Kut Teh place at Setia Alam area.
Before you read further, please be warned of an obscene amount of pork dishes coming up. J
Bak Kut Teh (BKT) is basically a Chinese soup boiled with tons of meat and offal, which is legendary in countries with high population of Chinese gluttons. Chinese herbs are usually added into the soup to provide more flavour and nutritional value (or so they say..). This soup is usually consumed with rice and “yau cha kwai”.
There many versions of BKT depending on the influence of the various Chinese enclave in a certain geographical location. If you are in Klang area where Hokkiens dominate, BKT is a super thick and robust soup, dark and almost creamy to the lips. If you are in where Teochews dominates, the soup is light and gentle flavoured with fewer herbs and is more refined to the taste buds. There are also many imaginative forms of BKT as my favorite one is a dry version of BKT. These are limited to only certain area in Klang where the BKT is boiled with minimal soup till thick and dry and ingredients such as dried chilies, okra and dried squid are added to boost up the strong flavours of BKT. Most universal BKTs are boiled with pork but due to health and religion, there are now poultry and seafood BKTs in some places available. 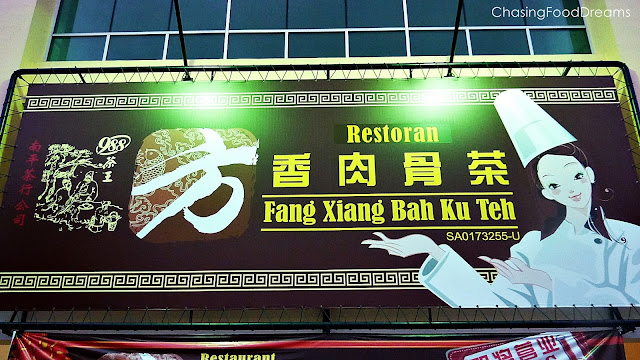 This new BKT opened 4 days ago in the Setia Alam area in a business called Setia Avenue, which is located next to Tesco. There are only two shops occupied and one of them is Fang Xiang BKT. Fang Xiang is owned by a young business owner named Ms Lee or Fang who is barely in her mid twenties. Check out her cute picture on her signboard! Good comical version of her…
I am impressed! This gutsy owner had the gallantry to take up a challenge of coming up with her own recipe of BKT after she sampled almost all the BKTs around KL and Selangor area. Sweet, courageous and friendly to boot, I really admired her guts to open a BKT shop. We had a chat with her and found that her father who is a pork seller, supplies the pork to her; therefore quality is rest assured.
She is currently the cook as well as she is very passionate about controlling the quality of the soup. Such an entrepreneur, she personally took our order and proceeded to prepare the food in the open kitchen. 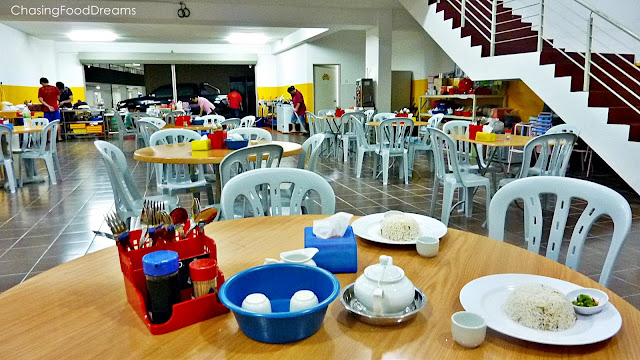 Simple and minimal ambience, the shop is very open with good ventilation. Currently, Fang advised that she is still tweaking the interior and is also waiting for air condition to be installed. Bright yellow painted walls brought up a cheerful ambience and there is even a second floor waiting to be renovated for future growth. 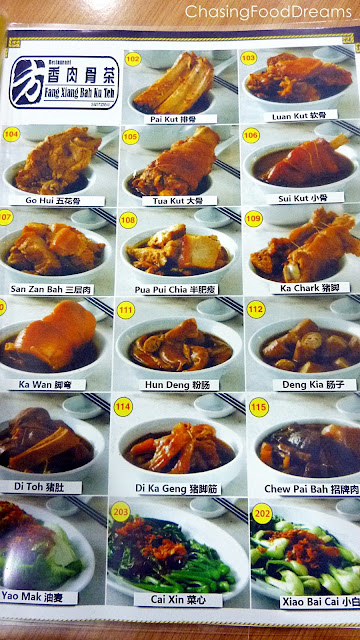 Menu with pictures of the various cuts of the pork and other dishes to make ordering easier. There are ten types of pork cuts and few spare parts available. Some cuts do run out fast, hence one needs to beat the crowd and get here early! 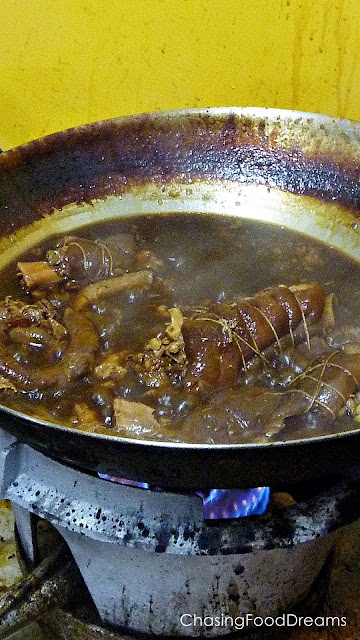 Check out the pot of boiling soup with pork…smells better than Famous A cookies! J 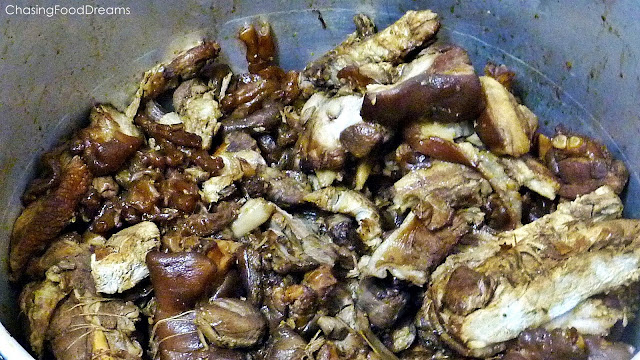 Lo and behold, enough pork to make you hit your meat quota of the week at one meal!
As we were there in the evening, quite a few cuts were not available as Fang mentioned that there was a huge crowd on that Sunday morning, which totally swiped out most of their pork. Funny how news spreads like wild fire to gluttons (like me!) on a new BKT restaurant as Fang Xiang is only 4 days old and located in a new area but word has gotten out already. 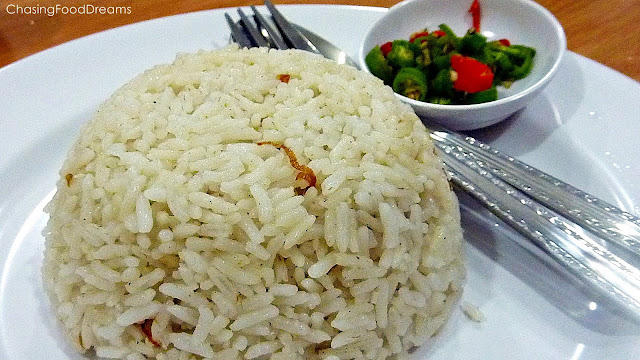 Rice was promptly served within few minutes of ordering. Fang Xiang served up fragrance shallot oil infused rice which is really yummy. I had to stop myself from ordering another bowl as it was perfectly cooked with each grain separated but still moist and lovely. 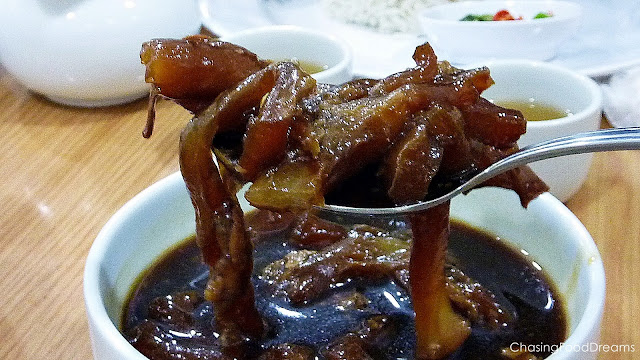 First up was a tendon called “Di Ka Geng” (RM11). I am not a fan of tendons, hence I only sampled a little of this. Soft and jelly-like, the tendons were boiled for hours to achieve a smooth and soft texture. This part is still not my cup of tea…hehehe. 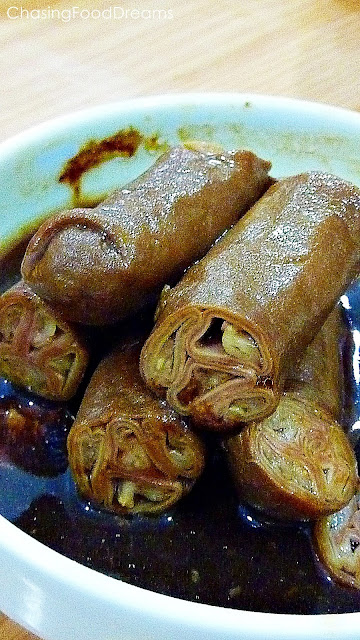 Next up, an offal part called “Deng Kia” (RM9) was actually intestine stuffed with intestines! This is a love and hate part for me as it takes a tedious amount of cleaning and preparation time to cook this. If not clean well, the musky smell of the intestine is not a pleasant experience. Fang Xiang’s version is pretty good as the intestine is soft and chewy without the gamey smell. 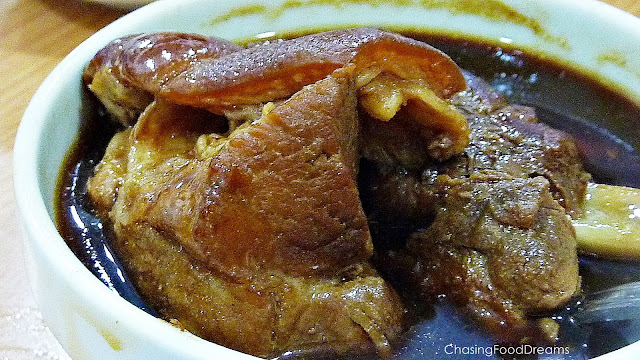 Small ribs or “Sai Kut” (RM9) is next. Soft meat with a little fat attached on a small riblet was swimming in the thick and dark luscious broth. Meat was tender and nicely seasoned with the essence of the herbal broth. 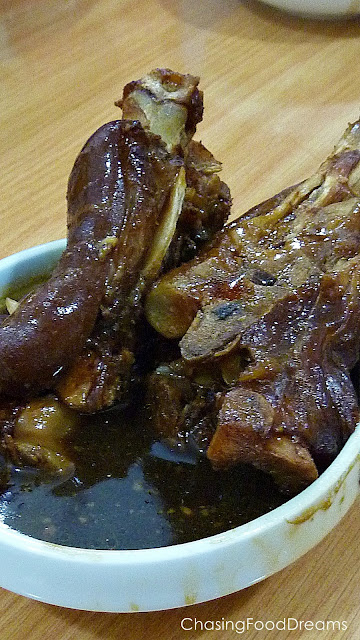 “Ka Chark” (RM9) is the end part of the leg, towards the knuckle as advised by Fang. For foodies who love to chew on gelatinous bits, skin, tendon and little meat, this is the part for you. An order has a split serving of the whole bone. I am not a fan but my friend walloped the whole bowl quoting…“lip smacking good!” 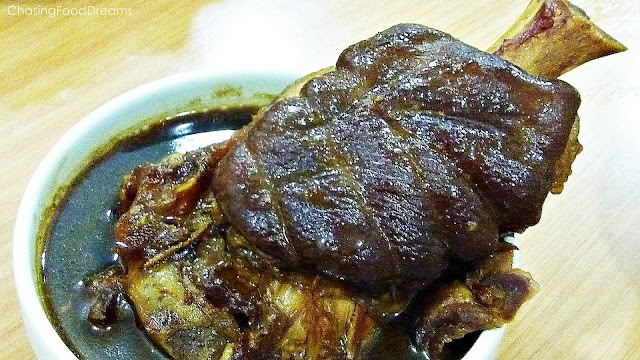 Big bone or “Tua Kut” (RM9) is a huge bone of the leg with dark meat. If you like dark meat, this is the one for you. One of my friends called this “Chicken drumstick meat or Kai Pei Yuk” whenever she orders this at any BKT shop. Velvety and firm, I simply adore this part. I skipped the skin though as the thoughts of consuming so much meat and fat at one time have me telling myself to go easy on this. 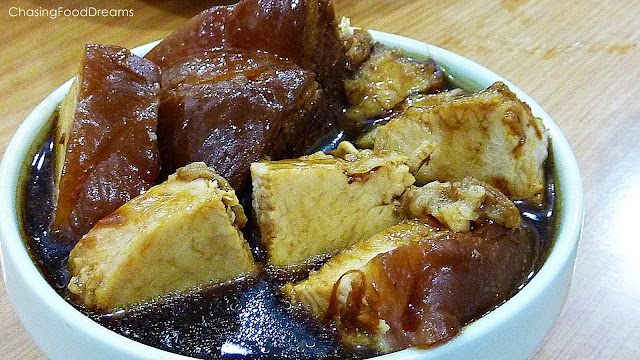 The final meat strangely called “Pua Pui Chia” (RM9) was my favorite of the night! Fang highly recommended this quoting that this part is very limited as it is a small portion on the back of the pig. First looked rendered me thinking of white meat which could be tough and dry. I was wrong again! Meat was so tender that at first bite had me at hello! Texture was similar to dark meat but the colour was lighter and much leaner than dark meat. I ate so many pieces of this and even consumed the thin layer of skin which was so scrumptious and smooth. Melt in the mouth goodness, I would say this is equivalent to the pork belly cut for me minus the fat! 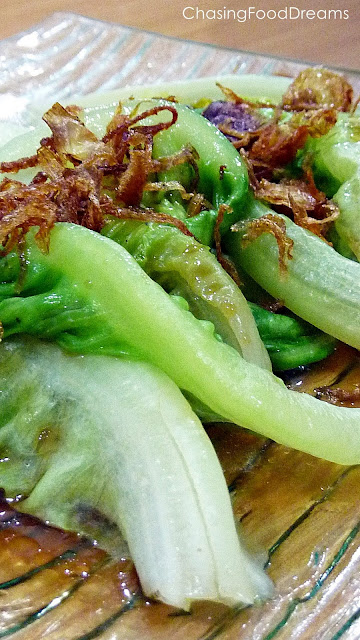 We order the obligatory vegetable dish of Yau Mak with Shallot Oil and Soya Sauce (RM5). Crunchy and tasty, the Yau Mak was nicely blanched. 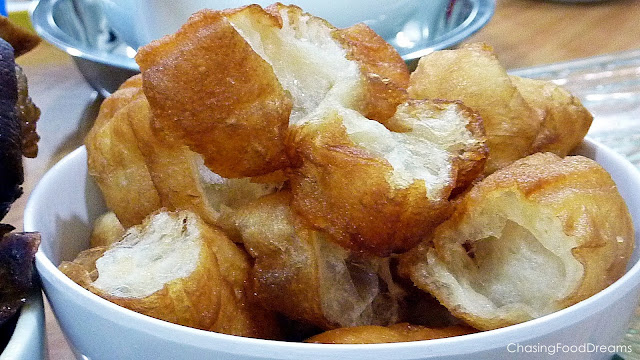 Another must have is the “You Tiao” (RM2) or fried oil stick. It was average as the oil stick was not crispy anymore, maybe due to the fact that it was evening already.

If you like the thick and dark soup variety, this is the place to be! Fang Xiang has great potential to be swarmed in the future as it provides a homemade goodness of luscious and creamy herbal BKT that does not leave you thirsty or with a sickly stickiness on the mouth after a meal. I did not have to guzzle much tea or water and by the time I reach home, I still felt good despite drinking a lot of the soup and overdosed on pork. They are generous with the soup and provided us with refills (..without a sour look) when we requested. J 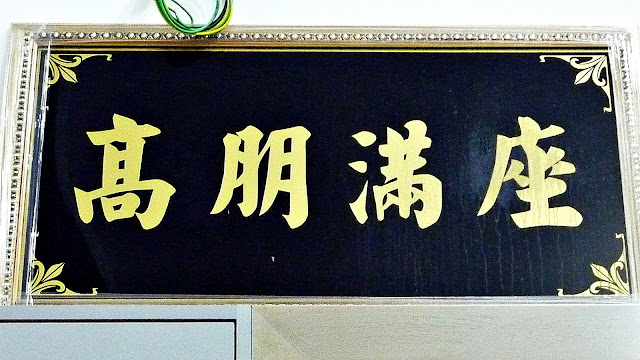 Salute to the young owner Ms Lee for perfecting her BKT!


I cannot wait to go back with my family on the weekends to pig out again…with such an almost perfect standard set from Fang Xiang, its going to be hard for me to go back to my normal BKTs around my area…
Fang Xiang Bak Kut Teh
13A-1, Jalan Setia Prima SU 13/S,
Setia Alam
40170 Shah Alam
Owner: Ms Lee
Tel: 016 682 8655
Business Hours
Tuesday to Sunday
8am to 3pm and 5pm to 9pm
Closed on Monday

Disclaimer: The opinions and experiences articulated on this blog is entirely based on my personal tastebuds and may be at odds for other foodies.
Email ThisBlogThis!Share to TwitterShare to FacebookShare to Pinterest
Labels: Chinese, Pork