Happy 2011 folks! We started the 1st day of a brand new year with a family celebration at KK Mayflower Seafood Restaurant located in Kota Kemuning. My sister had just moved there in December and she was gamed to try out new restaurants located in her new home. As it was the first day of 2011, she had made a reservation for their set menu priced at RM328 nett to avoid unavailability.

The eight of us positioned ourselves to embraced the ten person set meal.. hehehe. Did I tell you gluttons runs in my family?  ;0)

Ambience was super noisy and packed to the brim till tables were placed out of the restaurant on its verandah. Servers were frantically bustling around and even its boss was agitated due to its over packed customers. Service was not its virtue at Mayflower. However, portions were a very good size and some dishes faired better than others.

First up, the traditional 4 Season Platter which showcased the house speciality appetizers. The first course of every Chinese set meal usually starts of with various appetizers to kick off the tastebuds. I love the first course of such set meals as the chef will surprise you with his specialities and the varieties is always refreshing. Waiting for the first plate of goodies to arrive do somehow always ignite my hunger .. lol.. 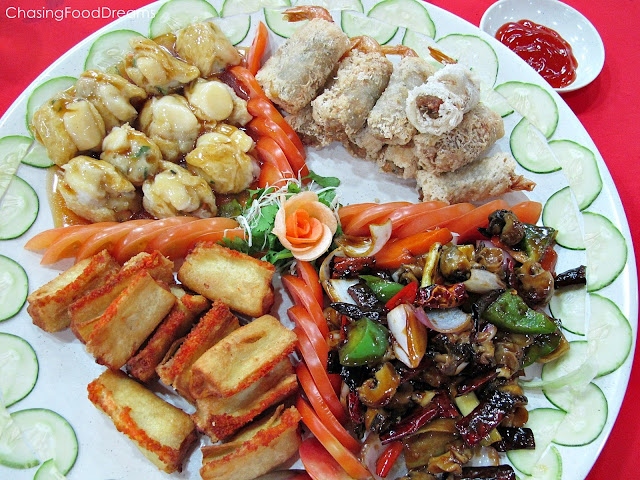 Clockwise from left (my assumption as I do not have the exact name): Crispy Otak Otak, Kung Pao Bai Top Shells (type of clam), Fish Paste Dumplings, Crispy Vietnamese Prawns with Yam.

Overall, this was satisfying. Nothing really standouts but everything was served hot and crispy. Kung pao clams was spicy and had me guzzling for water but taste was delicious and well flavoured. I would say that my favorite was the Otak Otak, a spicy concoction of fish paste encrusted in bread slices and deep fried. 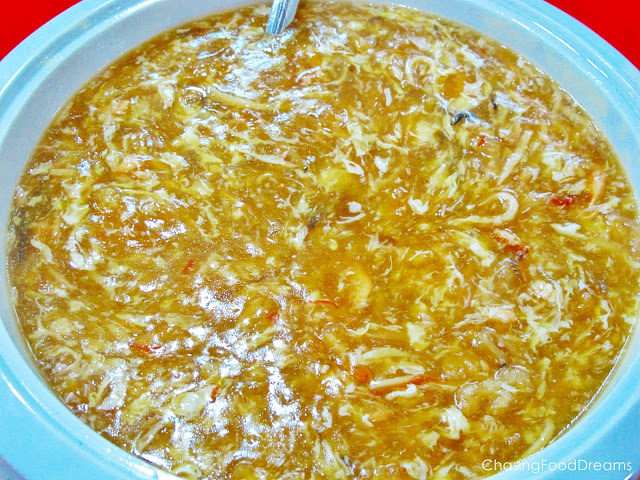 Next up, is another favorite of mine (I do seem to have a lot of favorites.. :P). Fish Maw Soup. I personally prefer this over the usual Shark Fin soup due to the extinction of sharks. We all have to do our part to preserve our earth before it's too late! Besides, those slivers of fins do not really contribute to the taste of the soup anyway. 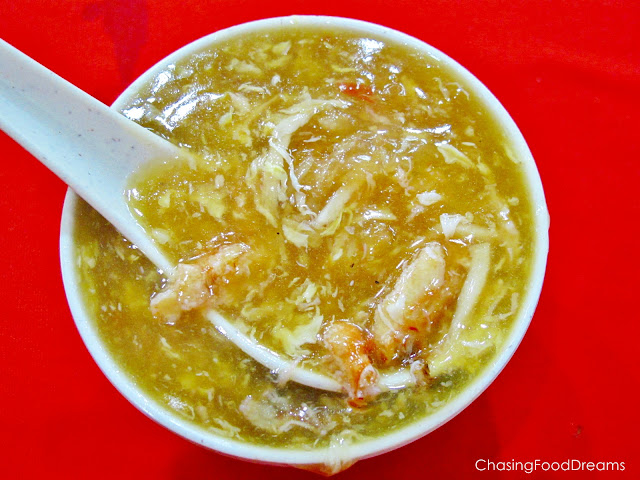 Mayflower's version is really good. One can tell by looking at the color of the broth where a good quality broth will have a gorgeous hue of golden dusk. The thickness of the soup is executed flawlessly and crammed with pieces of crab meat and fish maw, making it rich, creamy and outstanding. Portion was huge as everyone had two bowls filled to the brim. Sigh... with happiness.. 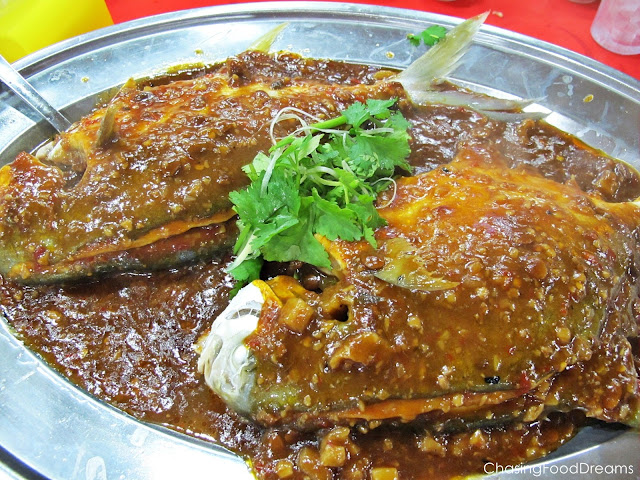 Steamed Golden Pomfret with a spicy bean sauce was next. I guess they couldn't find a big one, hence we got two fishes. Golden Pomfret is not the same as the expensive Pomfret but I guess this is somewhat its cousin or relative.. hehehe. Steamed and doused with the spicy bean sauce, the freshness of the fish was masked beneath the sauce and one cannot taste the freshness of the fish. Average to my tastebud. 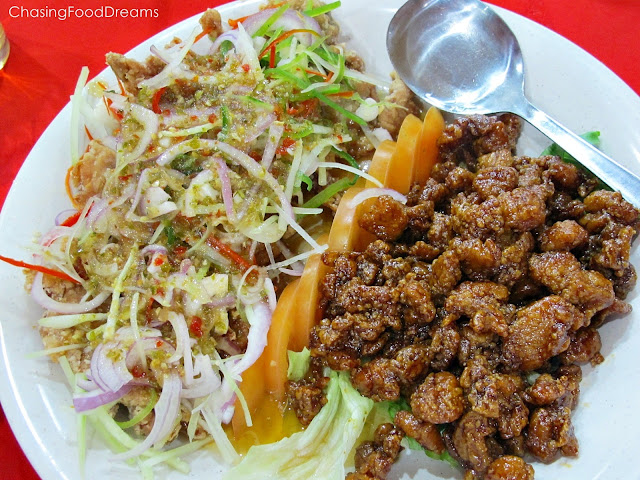 As this was the cheapest set, no piggy in sight but we had the Prosperity Yin Yang Chicken. Boneless pieces of chook prepared in two styles. First style was Thai Crispy Chicken where two thick pieces of Marylands were deep fried to a crisp and garlanded with a sweet and sour Thai salad of onions, chilies and cucumber. Flavour was zesty and tangy. Second style tasted like Honey Chicken. Super crispy bite sized chook coated in a sweet golden brown sauce which tasted of honey was well received by all. 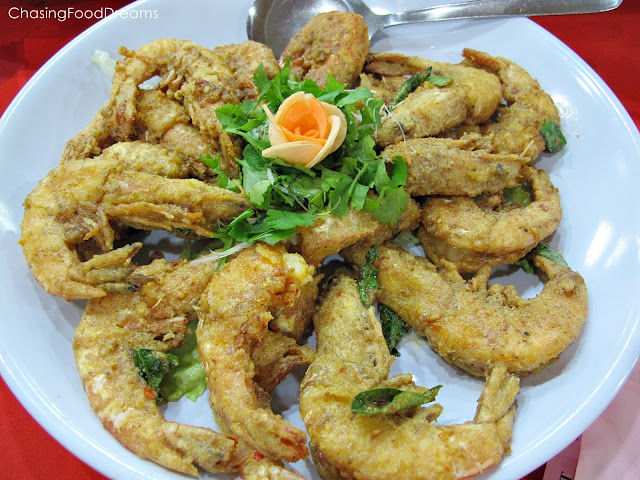 Another crispy dish of Fried Prawns with Salted Egg Yolk was next. The restaurant seemed to have a great penchant for crispy food I guess. No fault on this dish as it was perfectly crispy and coated with a great presence of salted egg yolk sauce. Finger smacking good and the shells were so crispy, one can almost eat it! 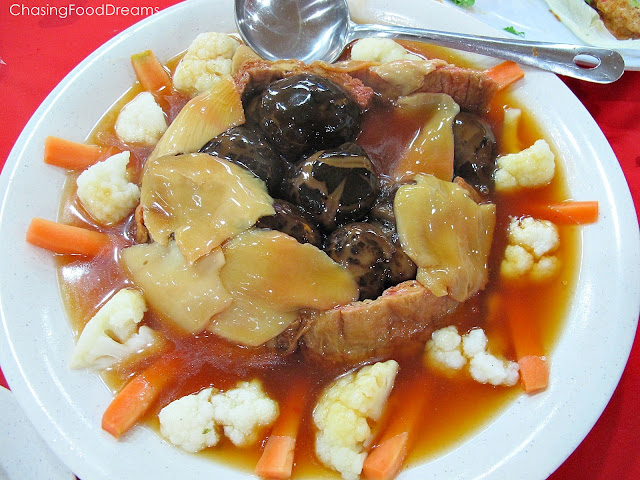 Loh Hon Chai were an assortment of veggies braised and doused with a light sauce. There were cauliflower, carrots, shitake mushrooms, abalone mushrooms and "dou bau" (a vegetarian gluten made from beancurd skin). Sauce was too light so it was quite flavourless for my taste. 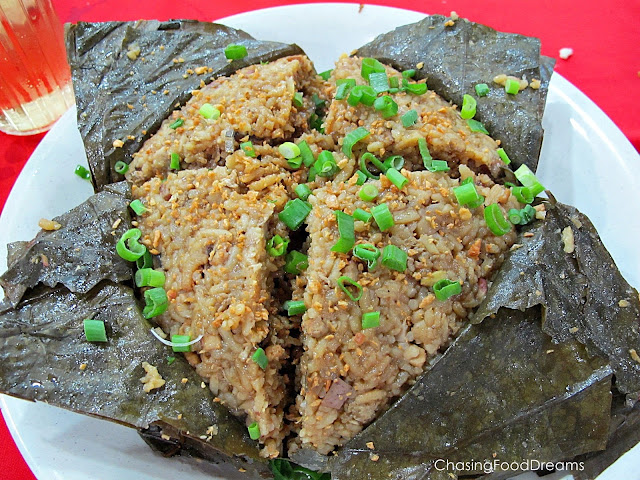 Last savoury dish was the Lotus Leaf Rice. Imagine little gems of rice with lots of cubed yams, dried prawns and bits of "lap cheong", all snuggled tightly enfolded in a lotus leaf and steamed till it soaked up the fragrance of the leaf. Tasty but a bit soft, the rice was still yummylicious... 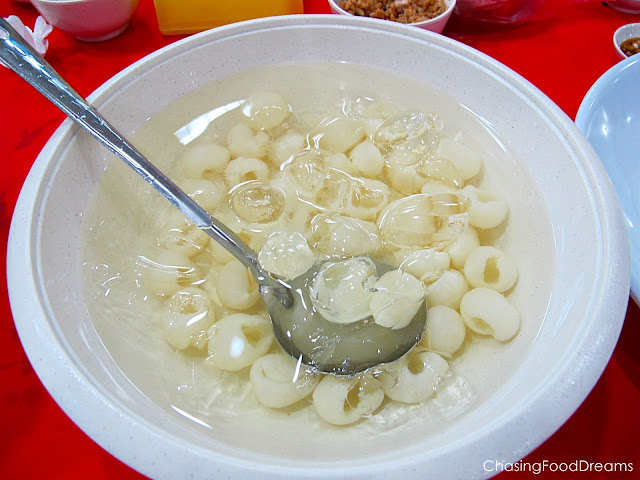 Dessert was nothing special as it was a can of iced longans simply served in its glory. 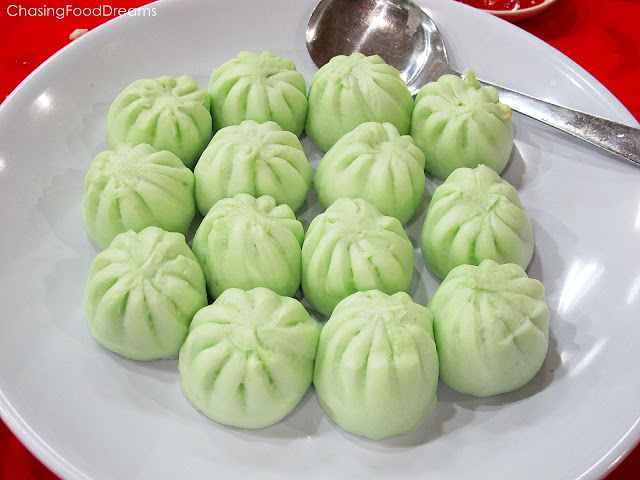 The second dessert took me by surprise. It looked really ordinary as it was Steamed Bun with Lotus Paste. However, it was steaming hot and when we broke the bun into two, moist and luscious paste of soft lotus slowly flowed out. Usually such buns have pre-bought lotus paste which are firm and kind of fudgey. This filling was realllly awesome! Hot, gooey and smooth with a fragrance of lotus paste, it felt homemade and fresh. Love this unpretentious bun and its filling to bits! (still drooling as I write this post..)


Overall, value for money as portion is big but again, some dishes are hits and misses. I read about their specialty crab dishes and do look forward to trying their ala carte and crabs. Worth trying if you are around that area.