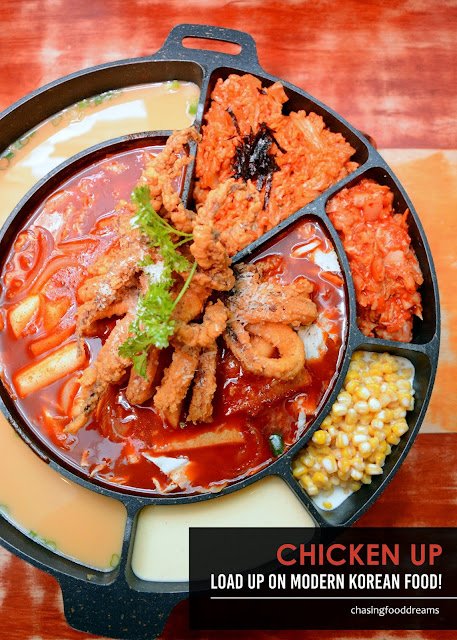 Load up on Modern Korean Cuisine! 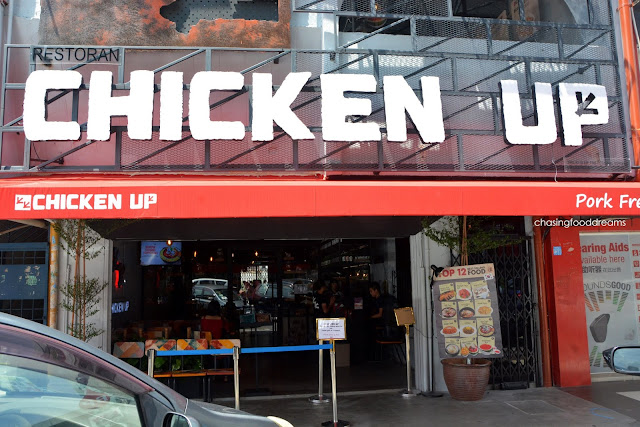 Korean joints have been mushrooming up everywhere on our culinary shores lately. We love our K-dramas as much as we love their cuisine now since their K-invasion years ago. When one mentions Korean food, it was mostly barbeques and stews. These days, mentioned Korean food and fried chicken comes to mind. Yes, Chimaek is the latest craze in town… 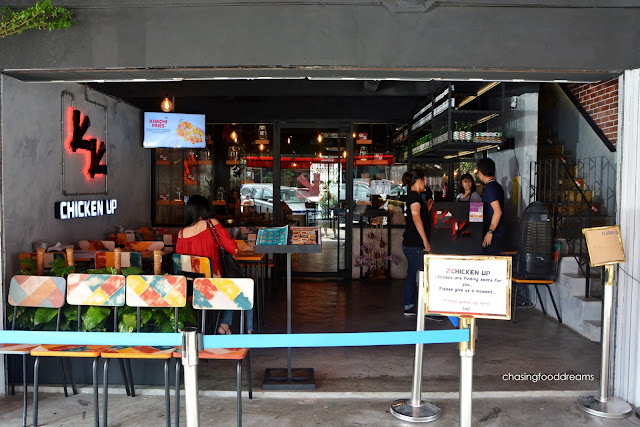 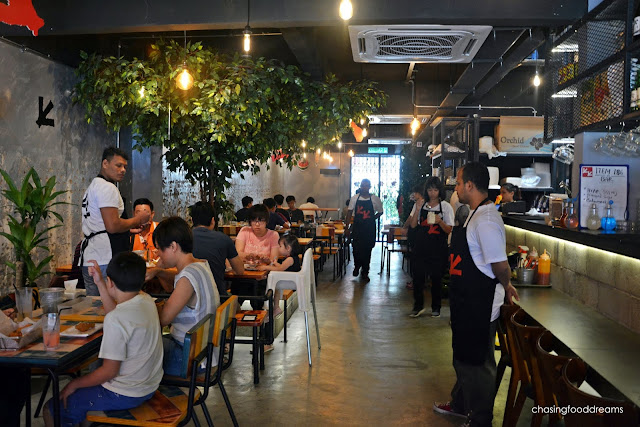 Chimaek has been a hit in Singapore before it landed on our shores. Hence it was only a matter of time before Singapore’s No. 1 Korean Fried Chicken, Chicken Up, pops up in our city. Started in 2010, Chicken Up took off with a big bang, serving up its signature Korean Soya Fried Chicken set in casual dining space. It’s trendy and modern vibes led its further success with another 6 more outlets in Singapore before opening its first Malaysian outlet in Johor. 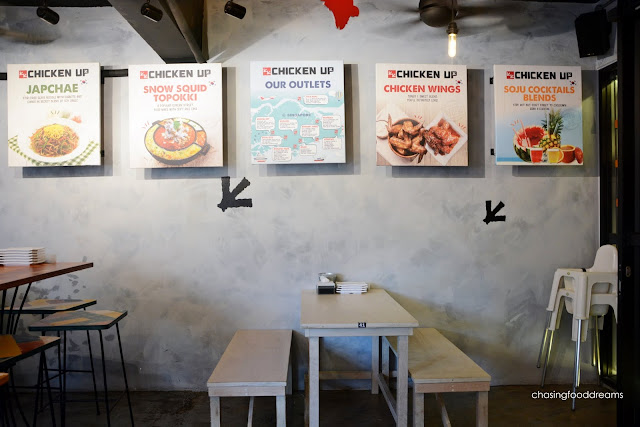 Recently, Chicken Up has found a new home in the bustling area of SS15 in Subang Jaya, adjacent to SS15 Courtyard Mall. Despite the heavily congested area that is constantly a parking nightmare, Chicken Up fans have been flocking there for treats of Chimaek and other Korean goodies. Housed in a 3-storey shop lot, Chicken Up currently seats 120 pax and even then, there’s a queue waiting constantly for this outlet.

A compound word formed from chicken and maekju (Korean word for beer), Chimaek is hitting our F&B scenes and we are totally embracing it. Fried chicken and beer, whats not to like? Sounds like the perfect partner in crime to me! 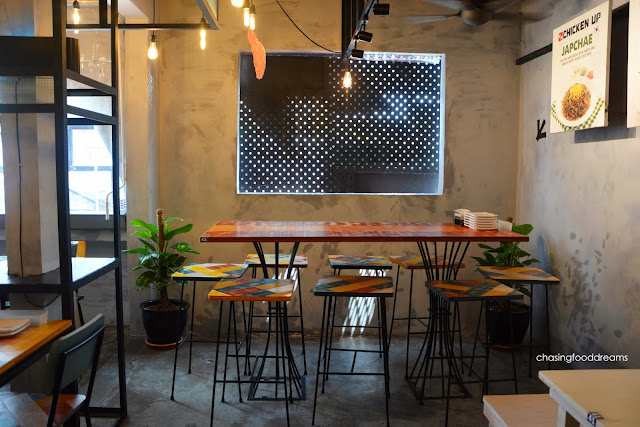 What makes Chicken Up so favorable currently is not only just its fried chicken but other Korean dishes that has been given a modern touch to cater to the young and adventurous. We love the modern and minimalist décor with plenty of casual seating and its eclectic mix of furniture and décor. 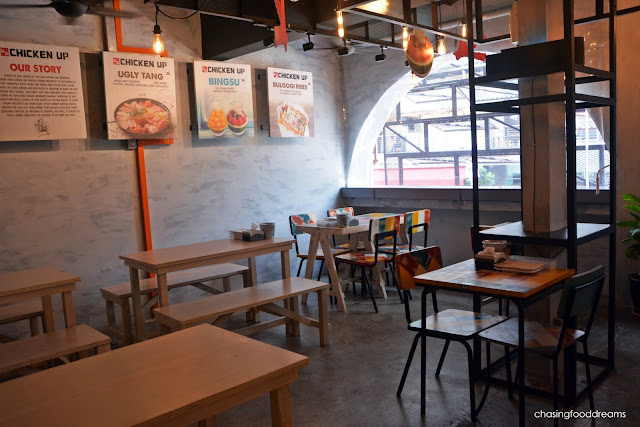 The menu is also filled with lots of Korean dishes ranging from fried chicken to stews, noodles, small bites and a whole lot of giggle juices, beer and Korean liquor to keep every one of all ages happy. 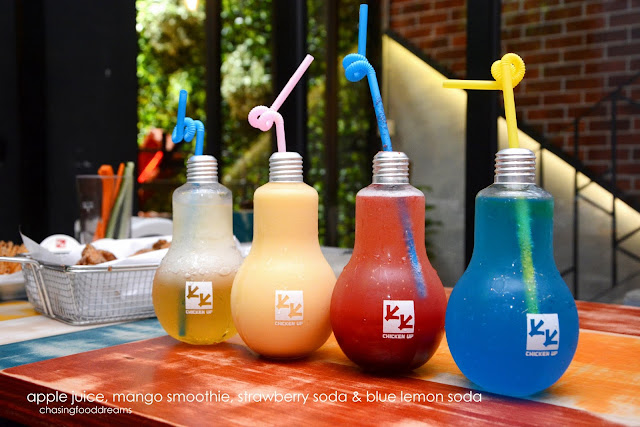 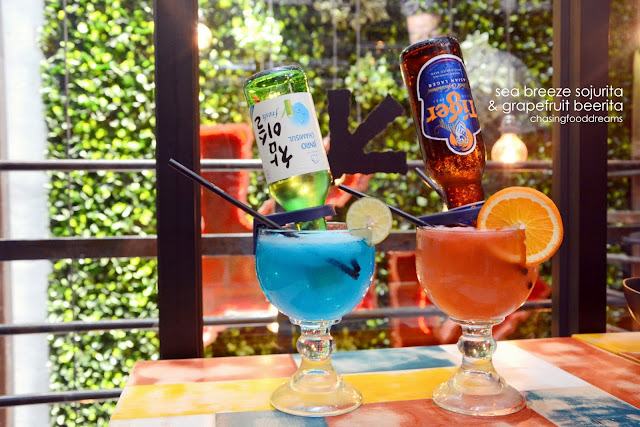 If there is one giggle juice to make your meal a happier one, it would have to be Chicken Up’s Sojurita and Beerita. There are few fruity flavours and your choice of soju or beer. We had the Sea Breeze Sojurita (RM48) and Grapefruit Beerita (RM48). The Sea Breeze Sojurita is pretty strong with a whole bottle of soju in the cocktail while the Grapefruit Beerita is refreshing and so delicious! 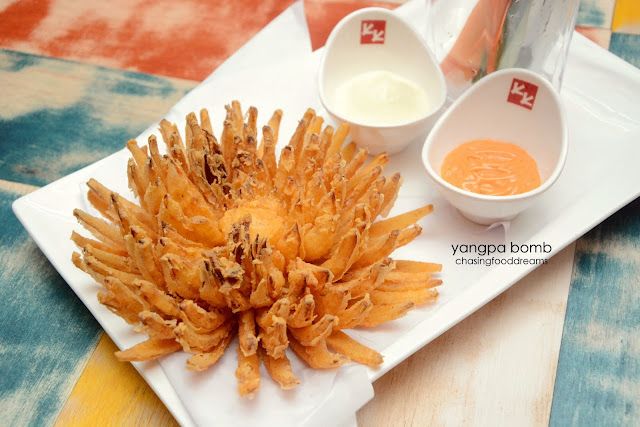 From the Whet Your Appetite section, we had an order of Yangpa Bomb (RM18). Similar to the American Bloomin’ Onion, you get a large onion cut to resemble a flower bloom, deep fried to golden crispiness and served with 2 sauces and some fresh carrot and cucumber sticks. Crispy bites of sweet onions goes well with our cocktails and beer. Makes great snacking bites… 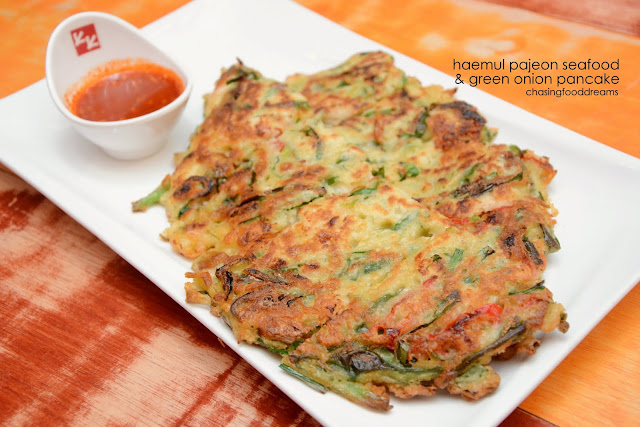 Haemul Pajeon Seafood and Green Onion Pancake (RM26) is also worthy of an order. Thick seafood pancake with lots of spring onions is tasty and filled with lots of textures from its ingredients. Comes with a side of chili sauce that gives a good kick of heat to the pancake. 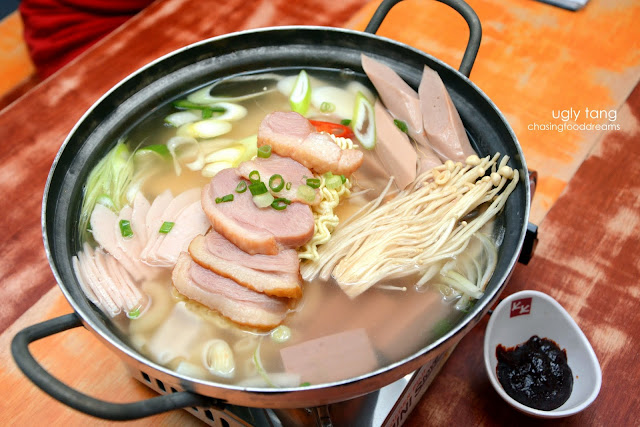 While it is more commonly known as army stew in the cuisine, Chicken Up named theirs Ugly Tang (RM38). What you get is a whole of ingredients put together from the influences of America into Korean stew made with based of gochujang chili paste. Slightly out of the norm, Ugly Tang is served with a side of gochujang to let diners adjust their own heat level. This is great because when you have kids, you can choose to omit it and the kids will certainly enjoy the lot of smoked duck, chicken slice, ham, sausage, macaroni, baked bean, cheese and noodles. My son certainly enjoyed this a lot… 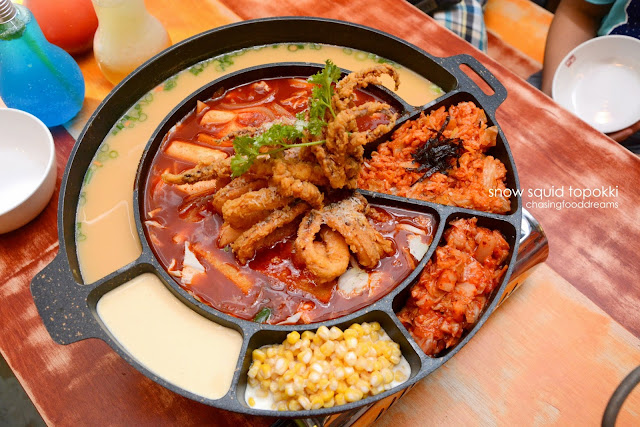 Snow Squid Topokki (RM68) showed up and stole the limelight on the food on our table. At sight, there’s a whole of food going on the sectioned hot plate set on a portable stove. Perch gloriously in the center of a red pool is golden crispy whole squid. The fiery looking pool is tteokbokki or rice cake cooked with sliced fish cake and vegetables in thick sweet and savory chili sauce. 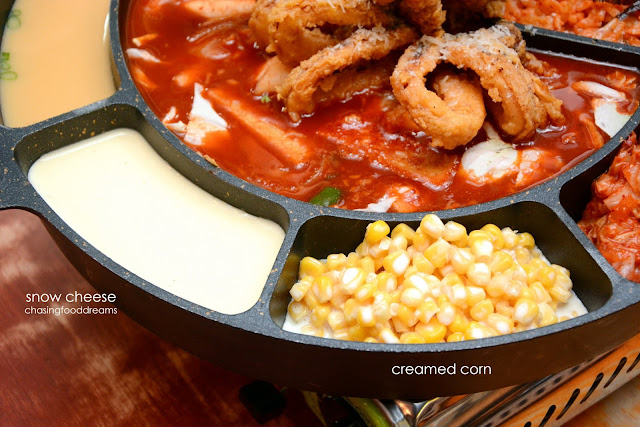 You get a side of kimchi fried rice, chopped kimchi, creamed corn, sweet milky snow cheese sauce and egg mixture all to be cooked gently over the burner. 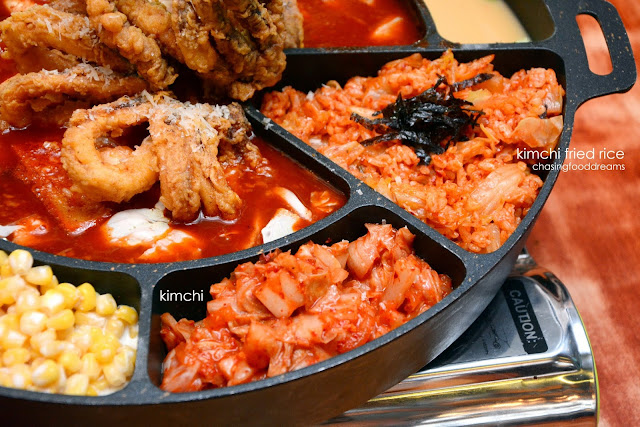 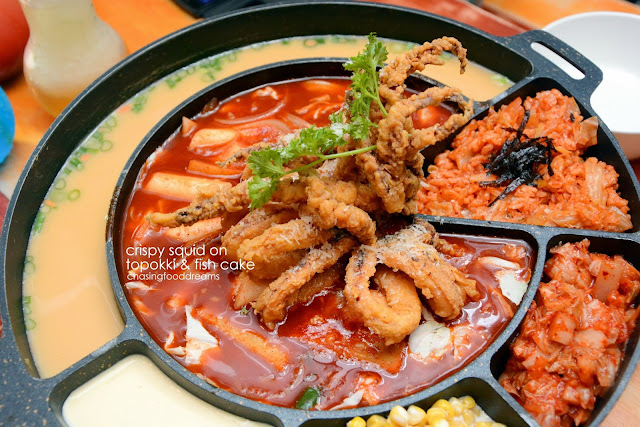 Chicken Up’s staff will cut your squid up for you for easy eating. Savor this slowly as some of the items cooked. The tteokbokki and fish cake in sauce is a tad too sweet for my palate. Though it looks fiery, it’s not as spicy as the other dishes we had. We enjoyed the whole dish together as it is full of various flavours and textures. 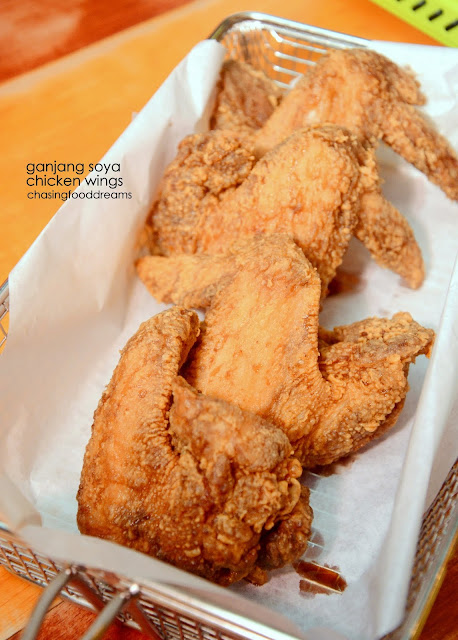 Fried chicken is what we came for and we were not disappointed at the house signature Ganjang Soya Chicken Wings (RM18). Marinated in Chicken’s Up’s special soya sauce, these crispy large chicken wings are juicy and flavourful. It’s definitely a crowd pleaser as this is what Chicken Up is famous for. There are spicy versions of this too if you want some heat. 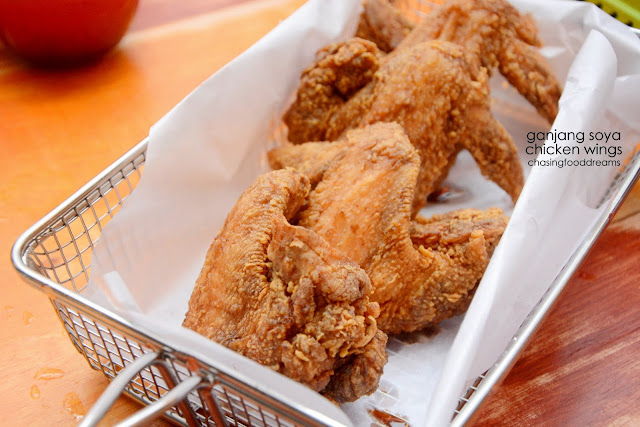 How good would I rate this? So delicious we had a second order…. 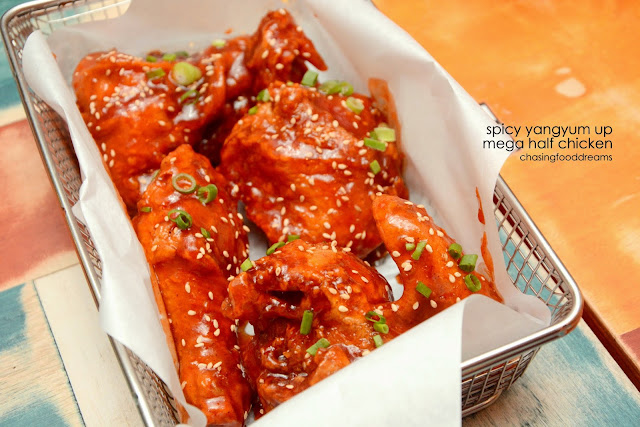 If you’re not into just wings, go for the Mega Half Chicken. Similar except you get other parts of the chicken prepared in several sauces and seasoning. We wanted some heat for this one and we had the Spicy Yangyum UP Mega Half Chicken (RM28). 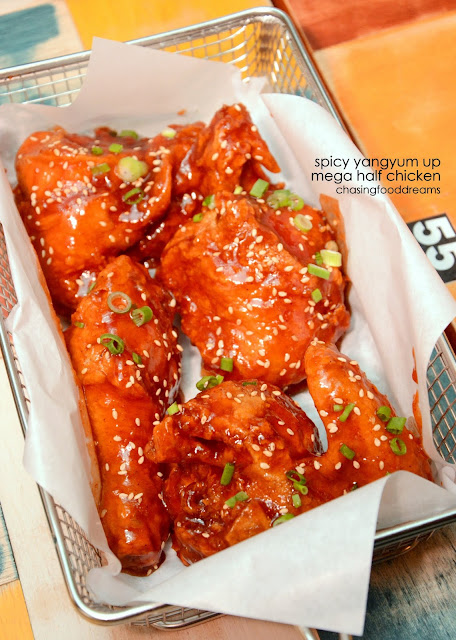 Don’t say we didn’t warn you, this one is a heat bomb! Four large pieces of chicken, crispy, juicy and coated in a fiery-looking sweet and spicy chili sauce will certainly jumpstart a bonfire in your mouth. Though it’s super spicy, it still has an addictiveness that made me go back for more. Not for the faint-hearted! 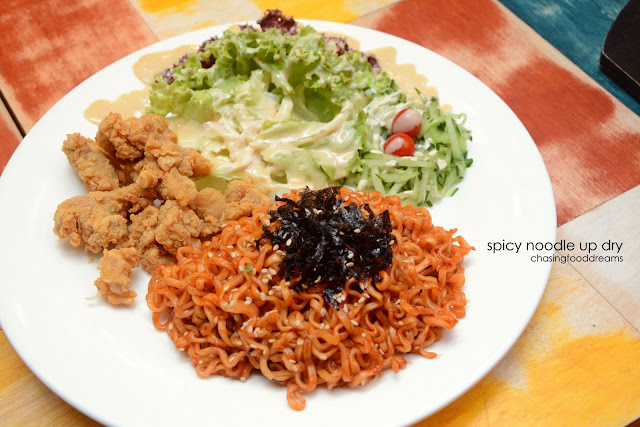 As if it didn’t get any hotter, the Spicy Noodle UP Dry (RM18) slam my palate again with another round of fireworks of heat. I swear that this one is even hotter than the chicken we had. My tolerance of heat is quite high but even then, I couldn’t hold this one down. The noodles have a good al dente bite but its just to fiery for my palate because I couldn’t taste anything else except burning heat sensation. The popcorn chicken and side creamy salad did help to tone down the heat a bit. This dish should come with a lethal warning tag. 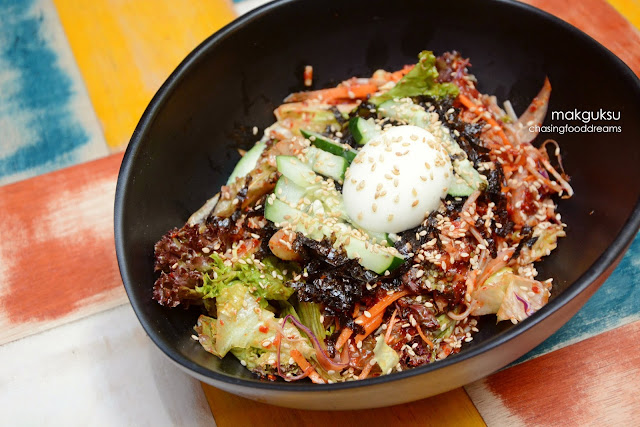 We also tried the cold buckwheat noodle salad Makguksu (RM20). It is refreshing as it is served cold and it has lots of fresh vegetables and boiled egg, making it easy to enjoy with the thin buckwheat noodles. This one was also a tad too sweet for my palate but my other friends had no issues polishing this one off happily. 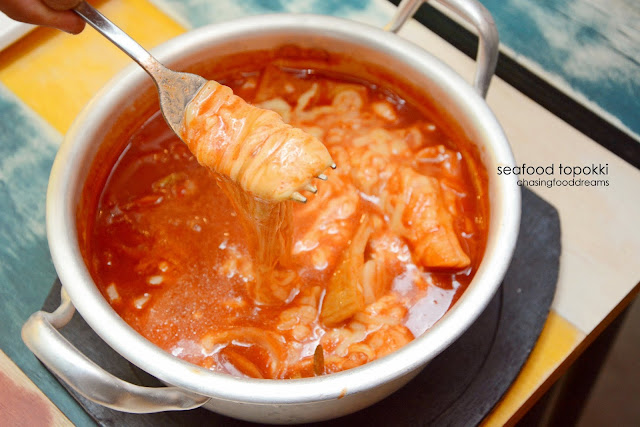 The Seafood Topokki (RM38) had lots of soft and smooth rice cake with fish cake, prawns and mussels in the classic tteokbokki sweet chili sauce but it is laden with lots of oozing cheesy goodness. The heat here is bearable and the flavours are well balance with just the right sweetness and savory notes. 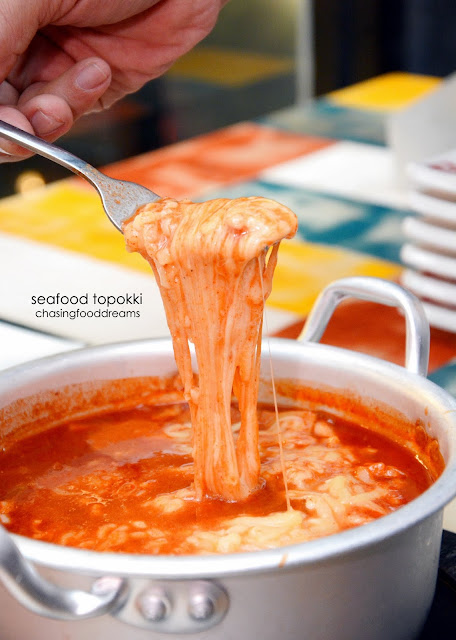 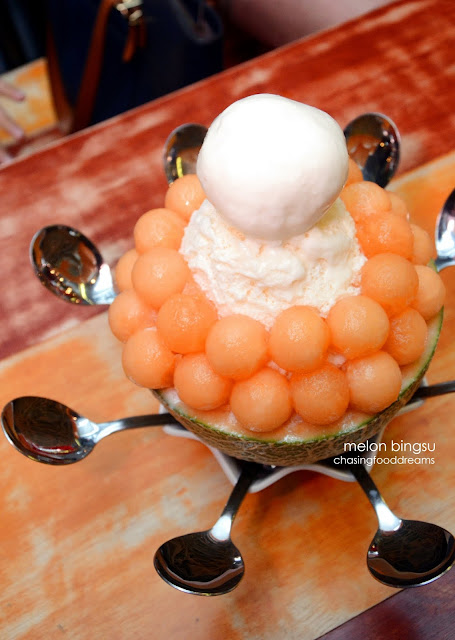 After all that heat, we were extremely pleased with the Melon Bingsu (RM38). It was such a heat reliever from all the heavy and spicy flavours. It is also a beautiful sight to see small round globs of orange melon that were crisp and sweet on the half melon shell. Digging in, the milky snow bingsu was so cold and refreshingly yummy together with the generous ice cream served. Must order! 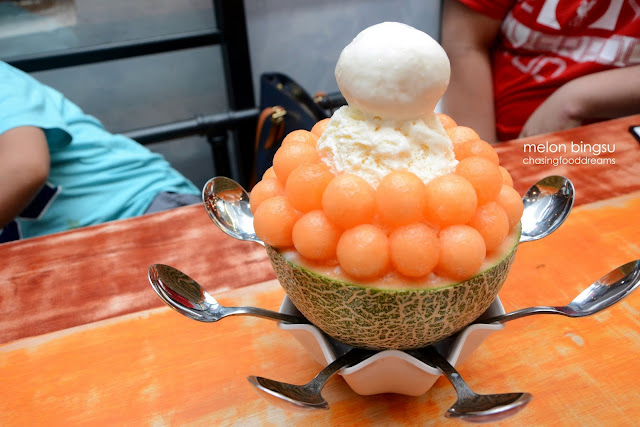 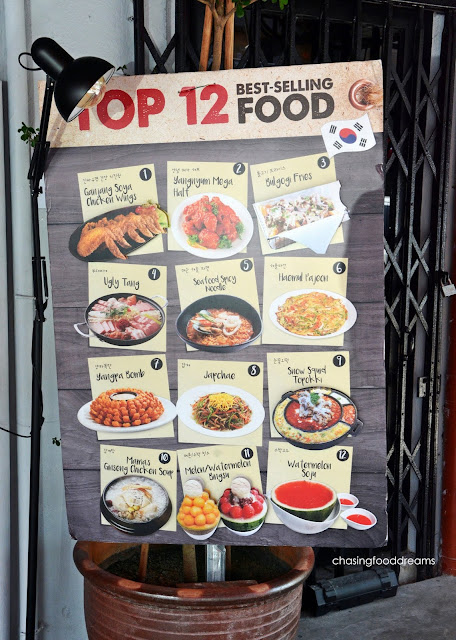 Chicken Up has certainly got potential here and judging by the weekend queue, we were pretty sure to expect more outlets opening up soon. Lots of other dishes to try and service was impeccable as we had an excellent and attentive wait staff named Sean who took really good care of us as well as all the other tables around despite the full house mode that Sunday.