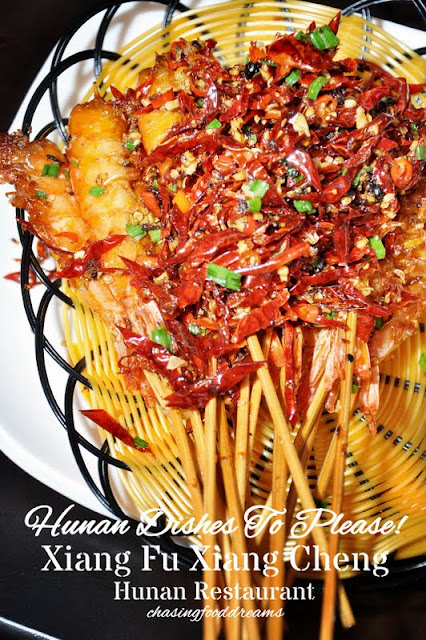 A Spicy Hunan Feast with a taste of Cantonese! 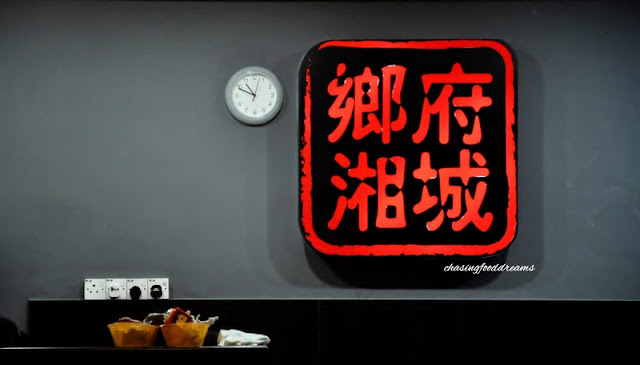 My obsession with spicy food is quite infamous among my foodies. A recent spicy excursion to Restoran Xiang Fu Xiang Cheng located in Scott Garden, Old Klang Road was indeed gratifying for my taste bud! I am always on a look out for Szechuan or Hunan cuisine and this round, I am ecstatic that it came to look for me! (wink!!)
Well-known for its hot spicy and pungent flavors, fresh aroma and deep color, Hunan cuisine is one of the eight regional cuisines of China. Hunan dishes, often known ‘Xiang’ cuisine, use liberal amounts of chilies, shallots and garlic in its dishes. Unlike Szechuan chilies that has a numbing effect, Hunan chilies are super spicy with pungent salty flavors due to pickling method. Hunan dishes also tend to use fresh ingredients, smoked and cured products and more oil than other Chinese cuisine. The cuisine changes with the region’s season featuring cold dishes for the hot summer and hot dishes for the cold winter. 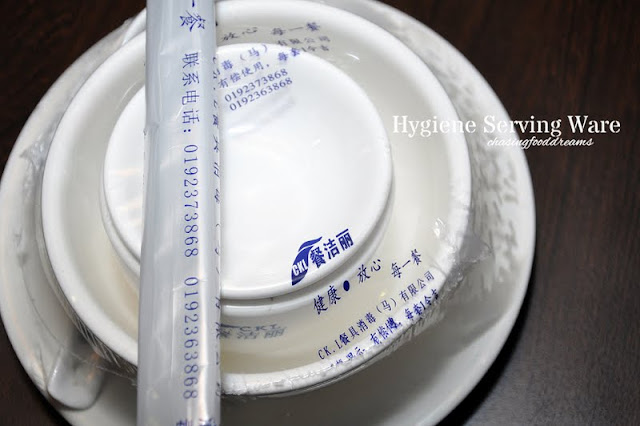 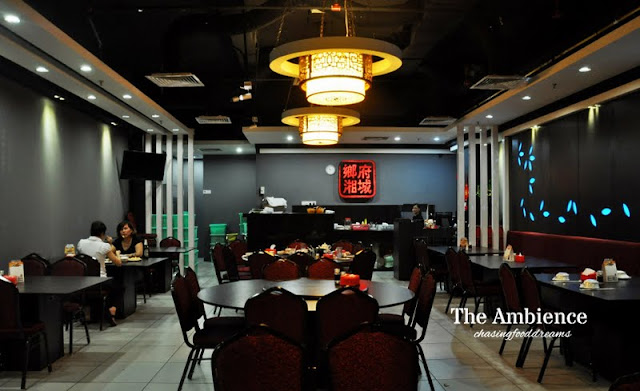 Xiang Fu Xiang Cheng is the brainchild of owner, André Lim and Chong WC that brought in Chef Liu, an experience chef from China. At Xiang Fu Xiang Cheng, the whole ambience is dressed in deep colors of gray, black and red. Despite the dark colors and dim lightings, the ambience is cozy with hints of art designs on their wall. Seating an amazing 100 people, the restaurant focused on Hunan-Cantonese menu with a touch of Malaysian influence. Featuring more than 100 items, the menu changes every 4-6 months while favorites are kept! 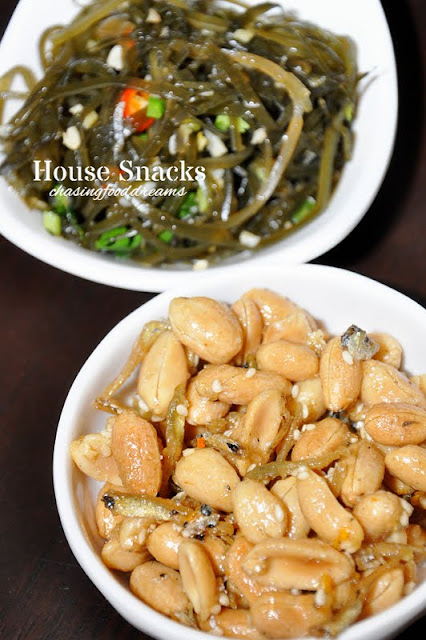 The dinner started with some snacks of ‘Xiang Cai’ to start off the taste bud. Marinated Seaweed Salad tasted a bit bland as I have had others that have spicy and robust sour flavors. Love the crunchy texture though. Peanuts and Anchovies with Orange Caramel was excellent! I could just munch on these with beer or in front of a tv. It’s sweetly coated while the crunchy anchovies provided some flavors and I also detected hints of orange rind in the appetizer. 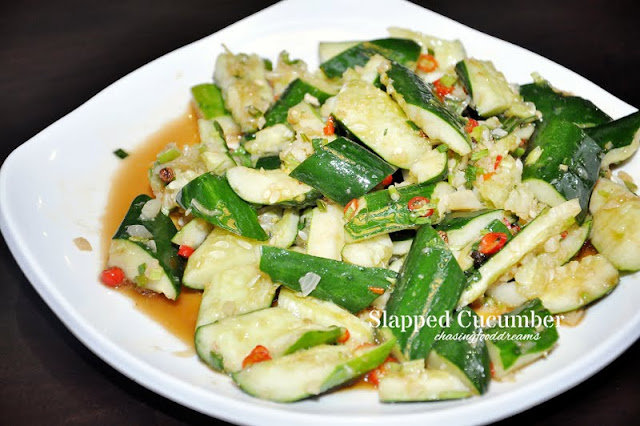 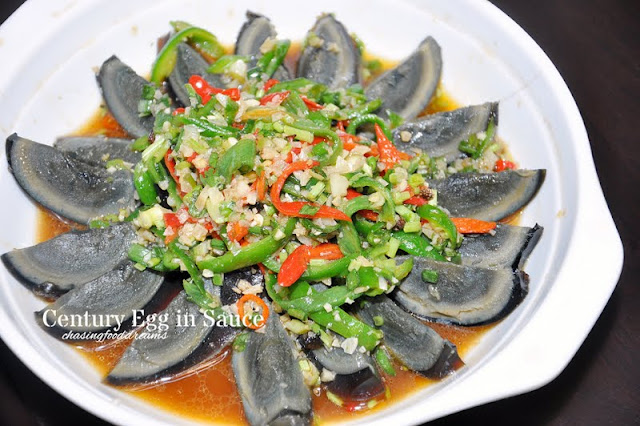 As appetizers, we had literally named dishes called Slapped Cucumber and Century Egg in Sauce. Both dishes are served chilled to room temperature and provided a lovely kick-start to our dinner. Slapped Cucumber (RM15), literally slapped on a hard surface till crushed, is marinated in a pungent garlic sauce with chili. Flavors are a little sweet and spicy with loads of garlic flavors. A little crunchy but refreshing on the palate! Century Egg in Sauce (RM15) proved to be a favorite that night as the pickled egg was wedged up and served with a mount of thinly shredded chilies and garlic. Pungent from the medley of ingredients, I enjoyed this tremendously for its spicy and robust flavors. 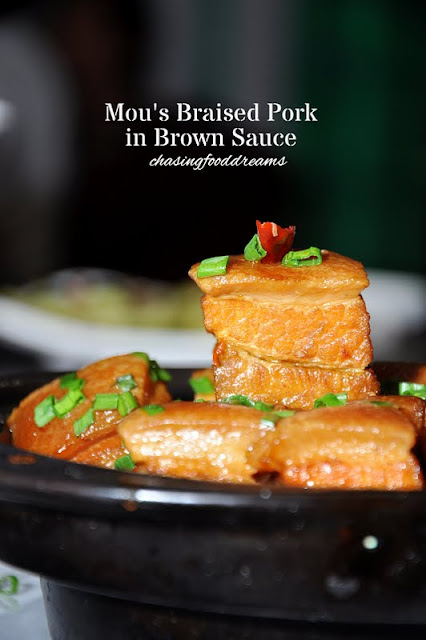 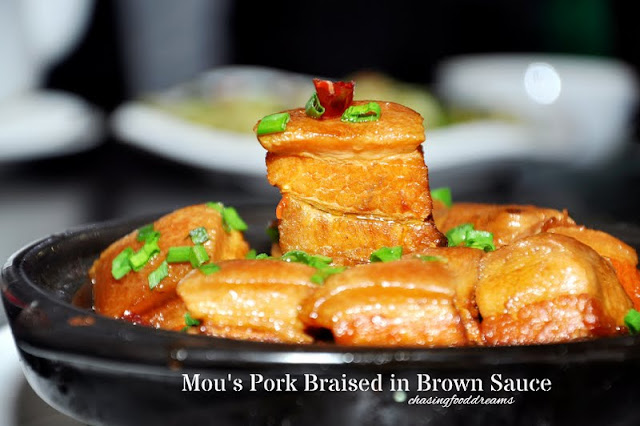 Named after Chairman Mao Zedong, the method of ‘Hong Shao’ braised dish of Mou’s Pork Braised in Brown Sauce (RM25) came with square cuts of pork belly braised till soft. I wished there was a bit more layer of fats on the cut for more luscious texture. The brown sauce was rich with creamy deep flavors of savory and a hint of chili heat. Do ask for white rice to fully savor the flavors of the pork. A tad oily but I guess it’s the braising of the pork and its layers of fats that give this dish its signature flavors! 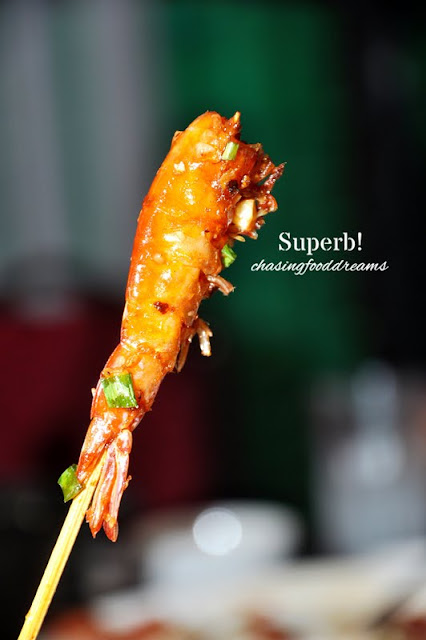 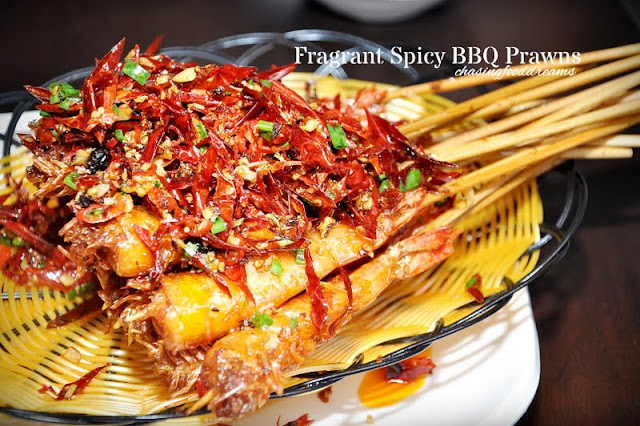 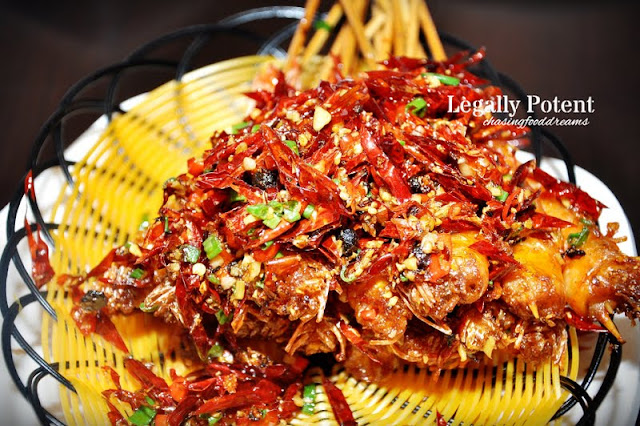 We were warned on the heat level of the Fragrant Spicy BBQ Prawns (RM25). As soon as the platter of the barbequed prawns landed on our table, I could smell the intense aroma of chilies which exuded a gorgeous smoky aroma. Executed on medium hot level (you can asked for various levels of heat!), the ultimate crispy prawns are beheaded but shelled on are jam-packed with a big mount of fried shredded dried chili and Szechuan pepper. My ultimate dish of the night was robust in heat, smoky, savory and sweet flavors. The skewers of prawns was so juicy and crispy, I didn’t even bother to remove the shells of the prawns. Fresh and sweet, the prawns were really pungent with the chilies and these are so addictively satisfying for me. A must-order at Xiang Fu Xiang Cheng!! 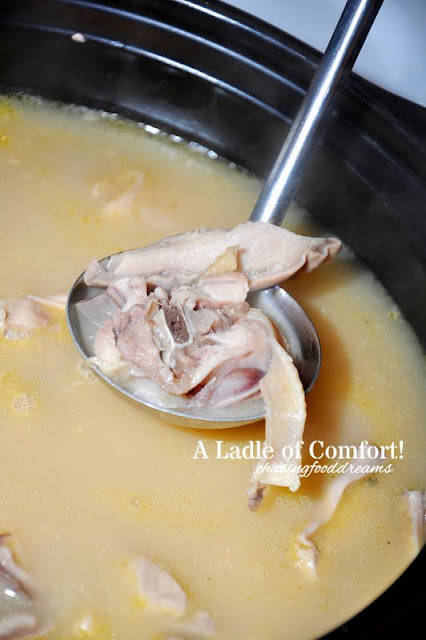 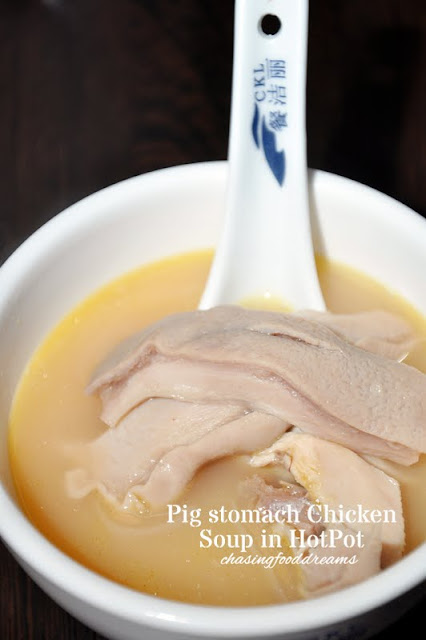 Another signature dish is the Pig Stomach Chicken Soup in Hot Pot (RM56 – small)! Loaded with chicken and pig stomach, the peppery broth is said to boost health benefits in nutrition and it’s a great remedy for weak stomach. It’s surprisingly comforting, flavorful but not overwhelming with pepper. The pig stomach pieces are firm but tender. I had two bowls of the broth for extra nutrients!! J 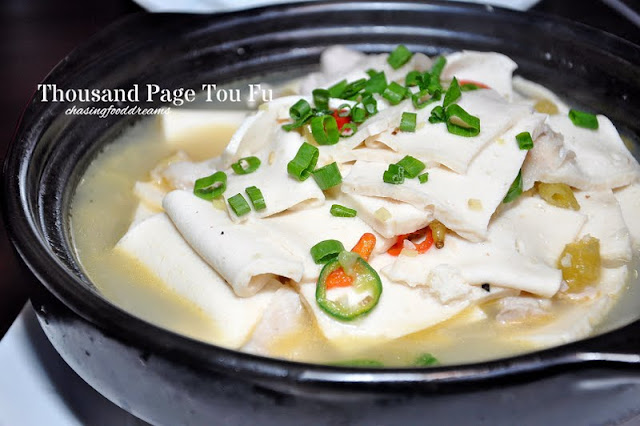 André was enthusiastic about his favorite Thousand Page Tou Fu (RM25) served piping hot in a claypot. Truly unique, the thousand page bean curd is imported since it can only be found in certain regions of China. Sliced thinly, I can see the rough textures of the bean curd. The texture is similar to fish paste and has more bite than the average bean curd. Cooked with a hint of spicy heat, the flavors are savory and comforting. Worth a try for its unique taste and texture! 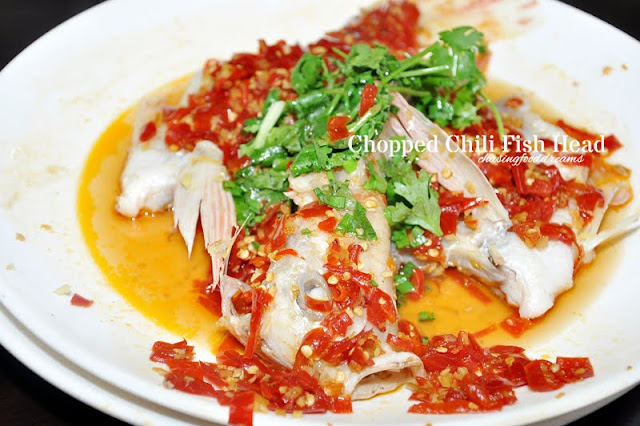 In every Hunan restaurants, one must certainly relish the infamous Chopped Chili Fish Head (RM35)! Do ask for a medium level of heat so you can still enjoy the sweetness of the fish. Fresh and sweet, the tilapia fish proved to be a good fish to go with the salted fresh chilies. I had lots of rice with the spicy sauce of the fish. 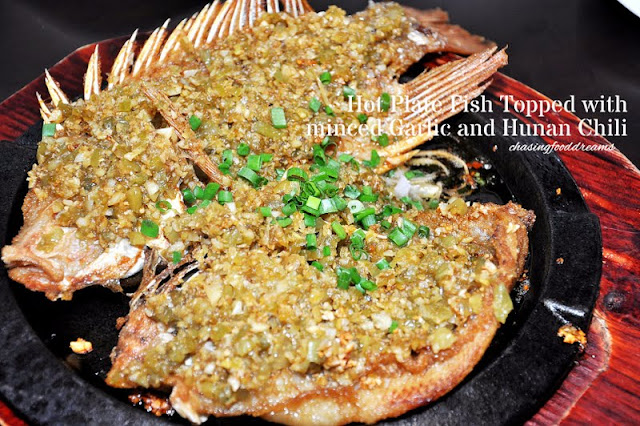 Hot Plate Fish Topped with Minced Garlic and Hunan Chili (RM30) was another crowd pleaser! So aromatic from the garlic and chilies, everyone dug in with gusto. Deep fried to crisp, the fish was sweet, flaky and jazzed up with loads of garlic and chilies. It’s a very, very scrumptious fish if I may say so!! Another must-order at Xiang Fu Xiang Cheng… J 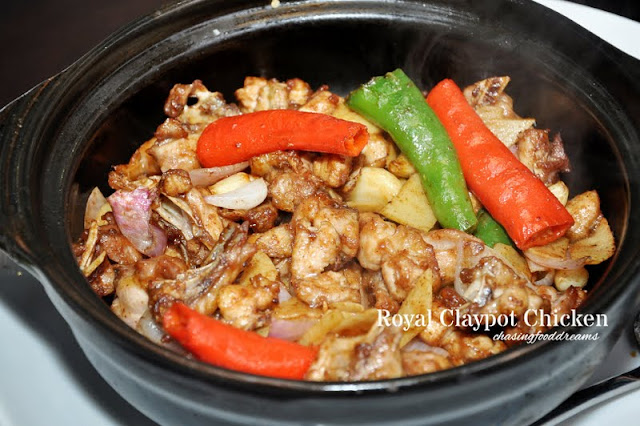 Royal Claypot Chicken (RM56) is another signature dish at the restaurant. Served bubbling hot in claypot, the aroma was indeed beautiful when the lid was lifted. Scented up with loads of onion, garlic, chili, coriander, the pieces of chicken was smooth and tender. Hints of soy sauce added a savory flavor to the dish. I am told that this is a popular dish for families as one can request for a non-spicy version. 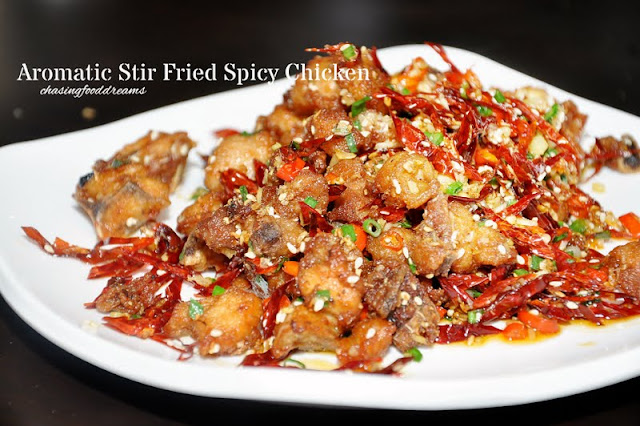 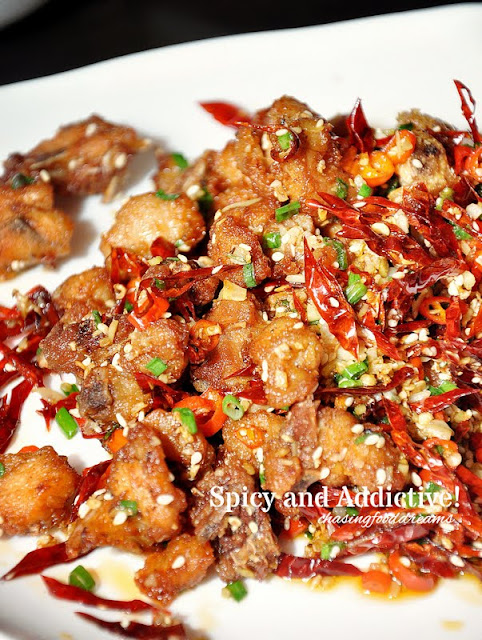 Another poultry dish of Aromatic Stir-Fried Spicy Chicken (RM22) was spiced up pungent dried chilies. Cubed fried chicken was juicy and spicy. Tasting almost similar to the earlier BBQ prawns, the chicken was decent in flavors. 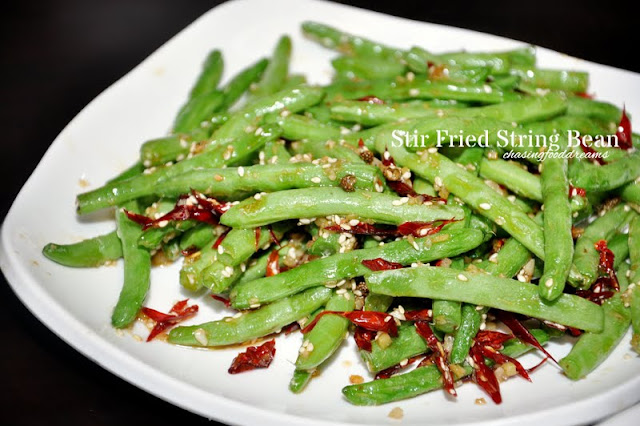 For greens, we had Stir-Fried String Bean (RM15) whipped up with more dried chilies! Good flavors of string beans with chili and sesame nuttiness, the textures are crunchy. I like the wok heat in the beans too. J 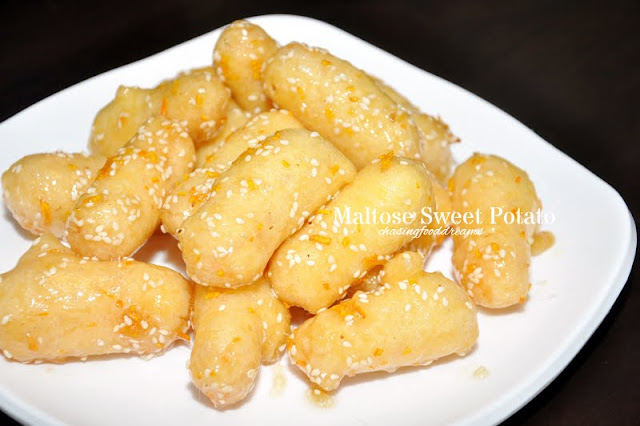 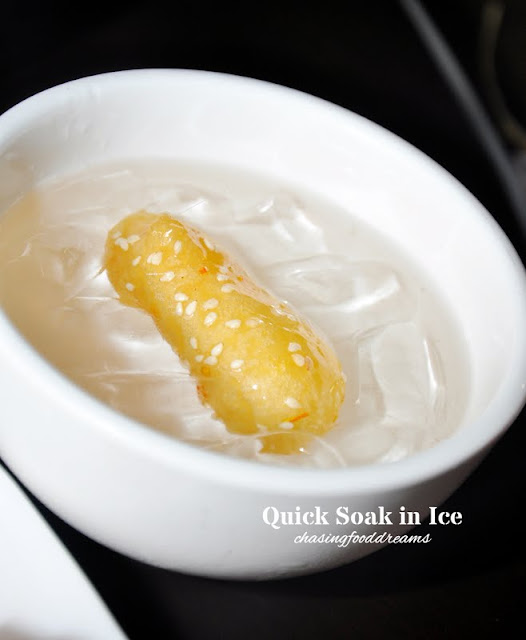 Desserts looked interesting and we had a blast in devouring them! Maltose Sweet Potato (RM15) had golden bolsters of deep fried sweet potato fried to a crisp and coated with a lovely sheen of maltose syrup, orange rind and sesame seeds. A bowl of iced water was served on the side. André quickly told us to dip each fritter into the ice water for a few seconds to crystallize the maltose. 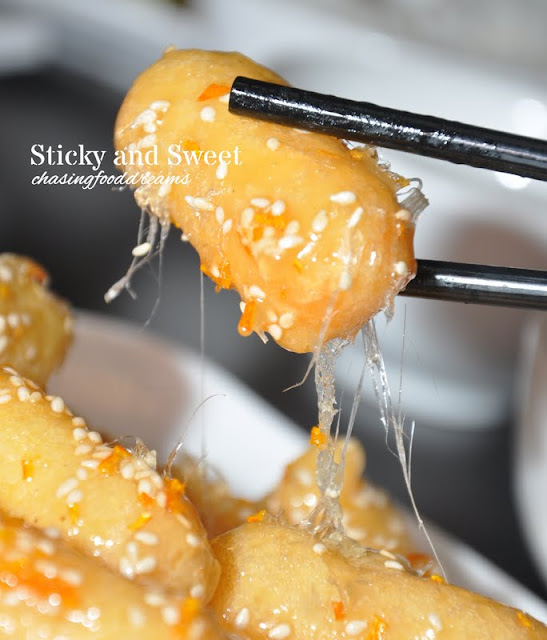 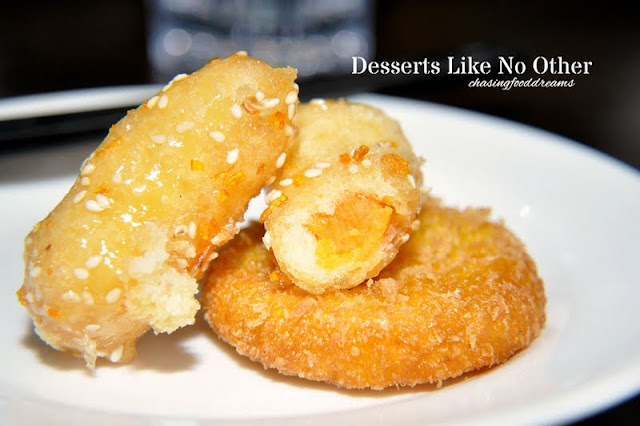 A bite of crunchy textures contrasting with an inner soft sweet potato was a welcoming bite! Sticky and sweet with an aromatic orange scent, this is lovely and very enjoyable. 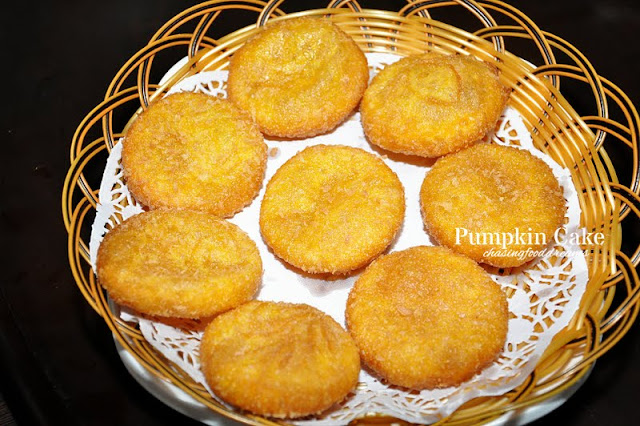 The second dessert was Pumpkin Cake (RM15) with crispy golden disc served in a basket. This one featured a crispy exterior with a chewy interior of pumpkin filling. The filling mimicked ‘Nian Gao’ with a sweet and creamy flavor. It’s not overly sweet but perfect to go with a cup of hot Chinese tea.
Other interesting dishes that caught my attention was Cold Marinated Beef in Sauce, Chuan Bei ‘Liang Fen’, Fragrant Spicy Crab, Calcium Bone Pot, Hunan Flavor Beef Brisket, Hotpot Cow Stomach, Water Boiled Beef Meat, Tiger Strupes ‘Kou Rou’ and so much more! 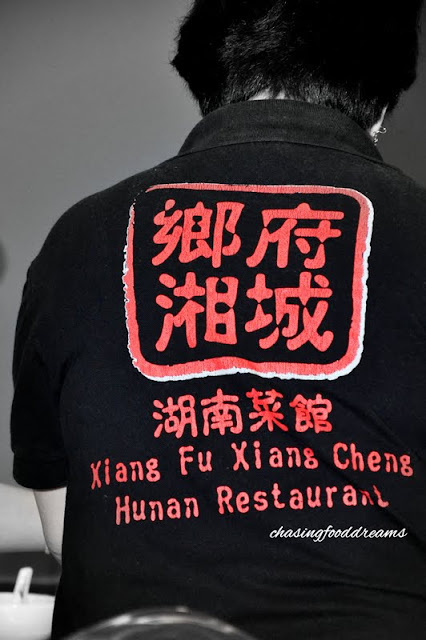 Xiang Fu Xiang Cheng Restaurant proved its worth in serving Hunan and Cantonese dishes fusion at its best! The spicy level can be adjusted in all the dishes and the menu also features non-spicy dishes for a balance to the enjoyment of its diners. Portions fared decent for the price and as most of the signature ingredients are imported, the owner stressed to keep the Hunan dishes as authentic as possible. I had a blast that night and was glad to find another spicy Hunan restaurant to add to my list of spicy cuisine to revisit. Traffic may be the only issue but brave it for an unforgettable Hunan experience!
Restoran Xiang Fu Xiang Cheng
(Facing the front main Old Klang road and located above directly Wong Kok or beside Beer Factory)
Lot 1-47, Level 1,
The Scott Garden Mall,
289, Jalan Klang Lama,
58100 Kuala Lumpur.
Contact: 603-7982 5071
Facebook: http://www.facebook.com/xfxc.hunan
Operating Hours: 11am to 11pm daily
*Thanks to KC and Andre for the invite!
Email ThisBlogThis!Share to TwitterShare to FacebookShare to Pinterest
Labels: Cantonese, Chinese, Hunan, Invited Events, Kuala Lumpur, Old Klang Road, Pork, Seafood