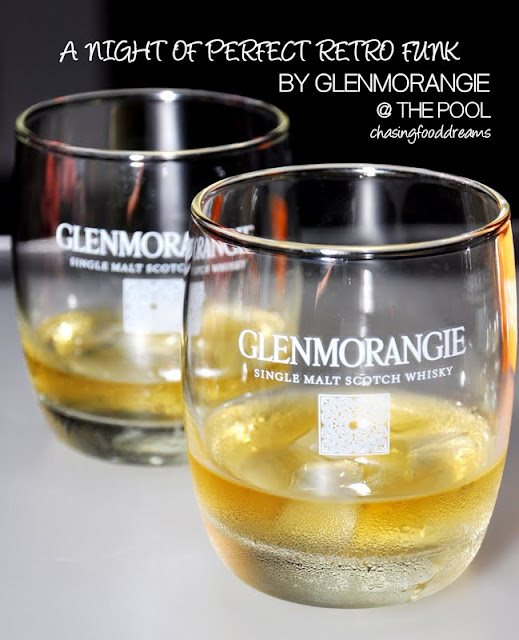 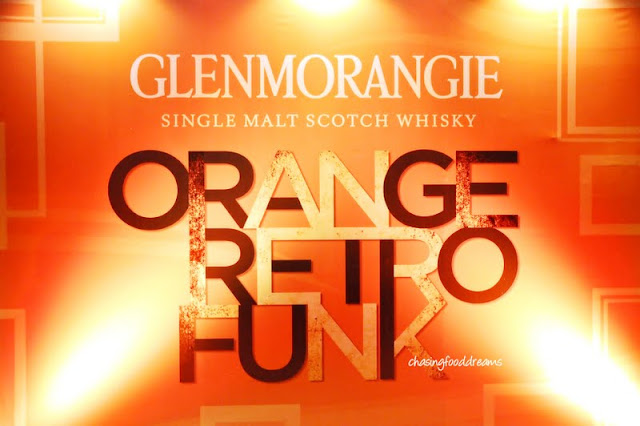 If “funk” could be associated with a color, it would definitely be a bright shade of tangerine as Glenmorangie took an inspired leap from the “orange” in its name to color The Hill’s second outlet, The Pool, in an arresting shade of citrus! Taking the purveyor of single malt whisky out of gentlemen’s clubs and onto the glass countertops of The Pool, Glenmorangie turned up the retro-funk vibes at Kuala Lumpur’s newest nightspot along Jalan Ampang at its very first Orange Night party yesterday evening. 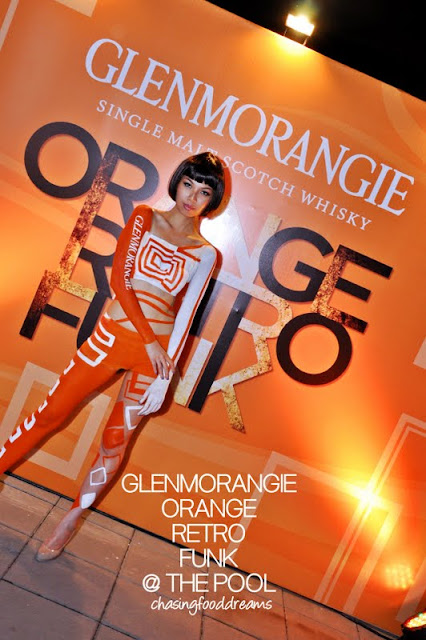 The latest hang out place in town, we arrived at The Pool and were greeted by the coolest model sprayed with a retro-inspired body pain! 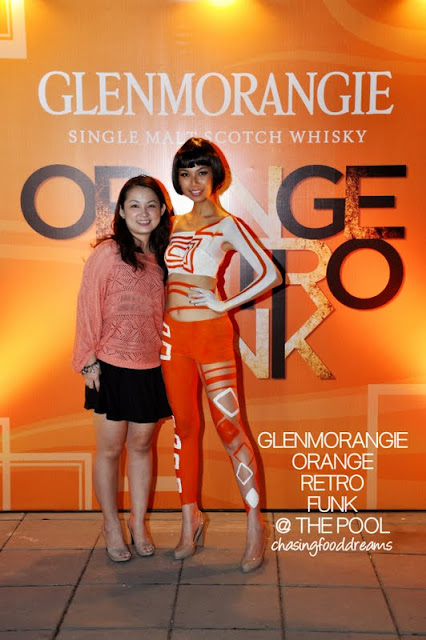 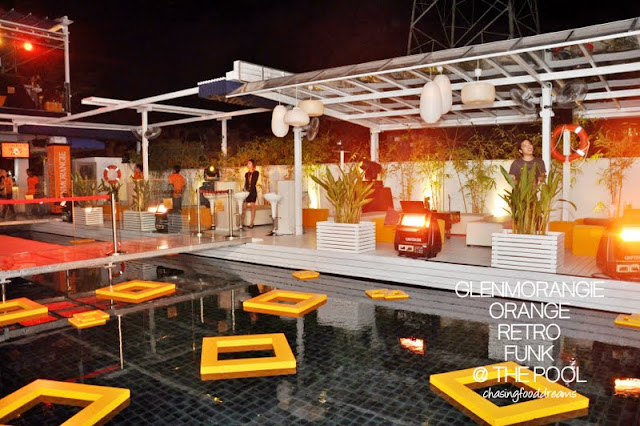 The Pool was glam up in sync with the theme and the whole surrounding had a cool vibe. Friendly servers were zipping around with glasses of the Unnecessarily Well Made Single Malt Scotch whisky. 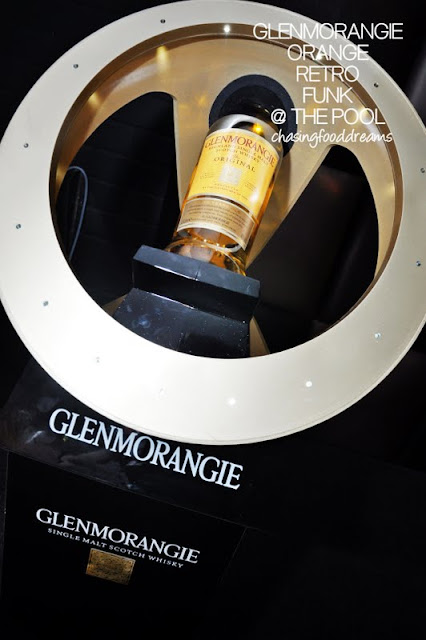 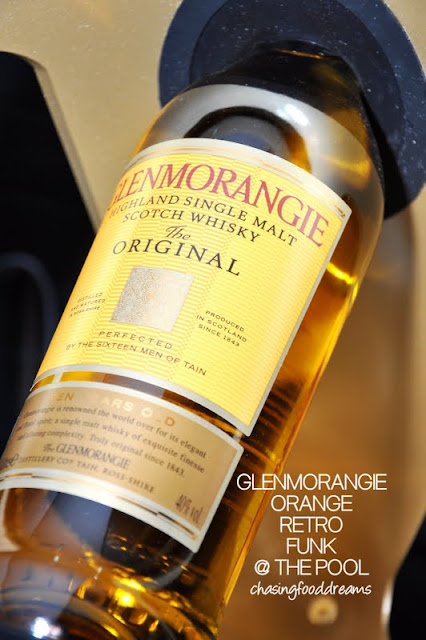 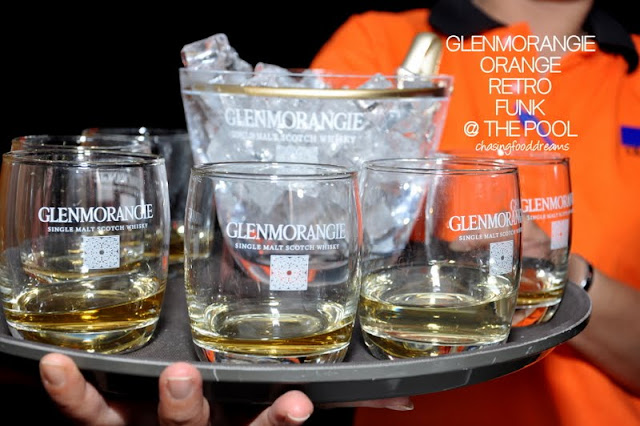 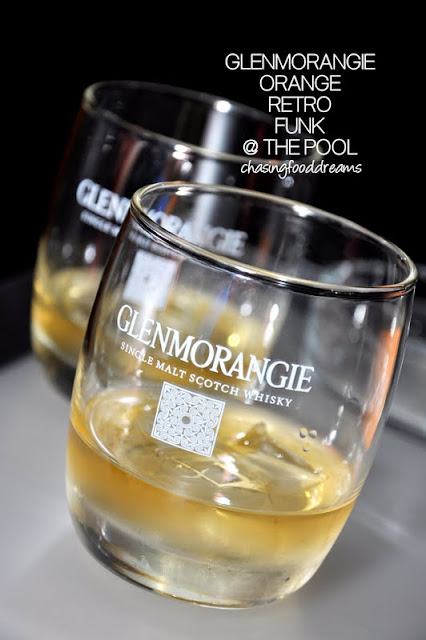 Make Mine on the Rocks! 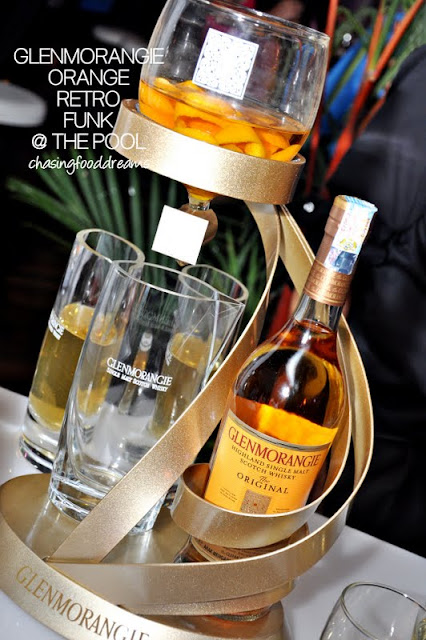 The Glenmorangie Zest Serve, a sculptural serving stand which creates an infusion of orange zest with Glenmorangie whisky. I have to admit, I do like the scotch infused with the orange as it has an extra touch of elegance to it! 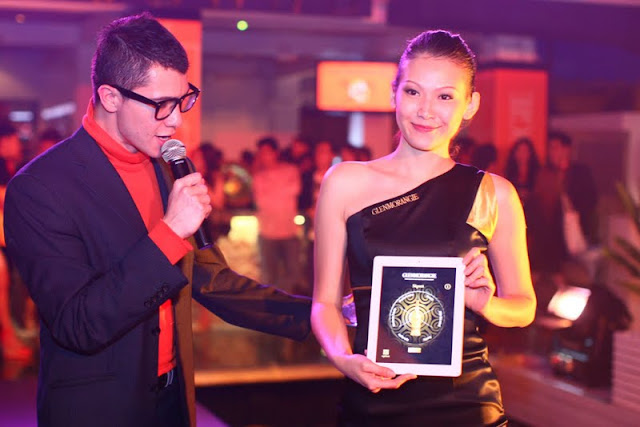 Glenmorangie Orange Night guests were treated to host Will Quah’s witticisms and “Unnecessarily Well Made” questions, which saw the audience winning exclusive Glenmorangie gifts and upping their knowledge of what it takes to make a barrel of Glenmorangie single malt Scotch whisky. 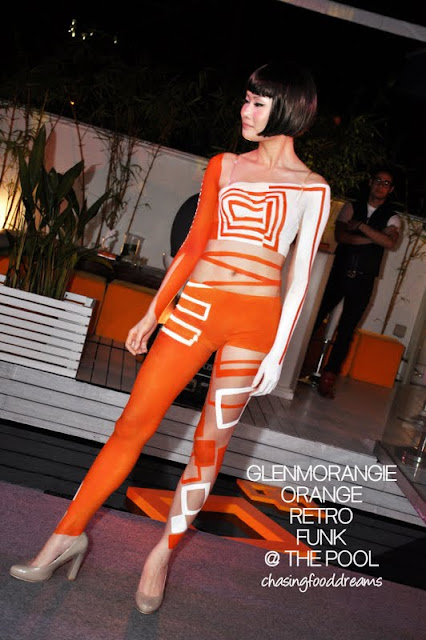 According to Will, these hot and retro styled models had 6 hours of body paint job done for the party... I have to say it’s worth every minute since they had everyone’s eyes on them throughout the night! 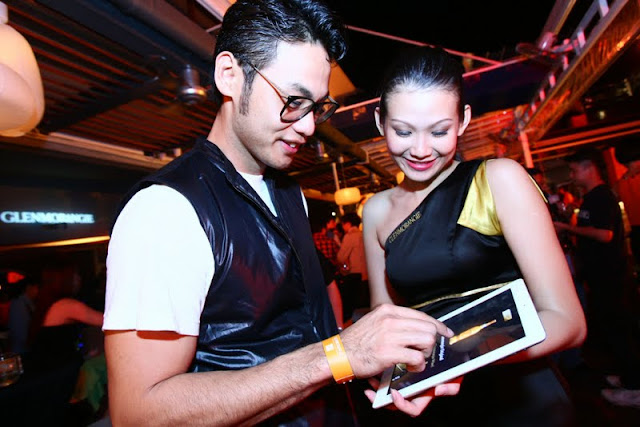 Moving from retro funk to the future, Glenmorangie ambassadors unveiled the brand new Glenmorangie Facebook page on their iPads. Single malt lovers and fans of arguably the most delicious and complex single malt whisky in the world can now access the page at www.fb.com/GlenmorangieMalaysia to receive exclusive updates, events and promotions by Glenmorangie. Further to this, guests also entertained themselves with the Glenmorangie “Spin The Bottle” App on the iPads. 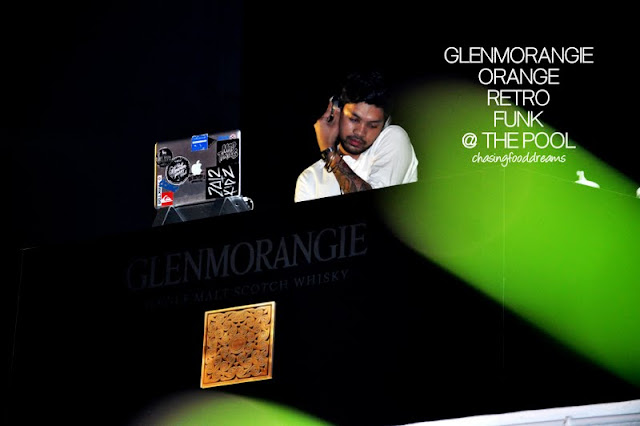 As the Glenmorangie Zest Serve further revealed Glenmorangie single malt scotch whisky’s layers of flavour, guests were kept on their feet by the groovy mix of Daikanyama’s resident DJ and the backbeat of Deer Society – Alex Asquared. With a steady flow of house and indie dance laced with a dash of 80’s synth from the decks, the Glenmorangie ‘Orange Night’ was a tasteful mix of the refined, hedonistic enjoyment of single malt whisky balanced with a healthy serving of witty retro funk, which proved to be infectious all night long!
Faces that night! 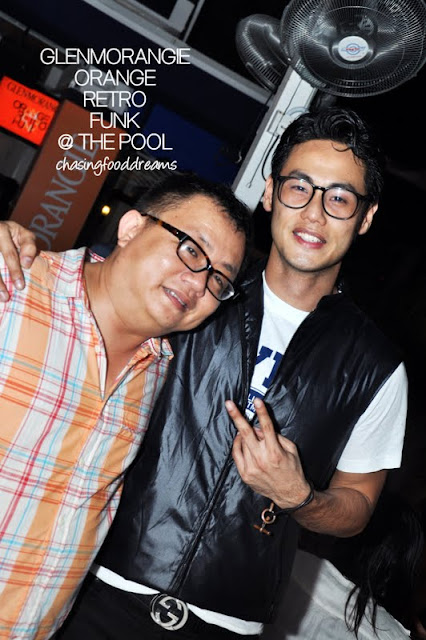 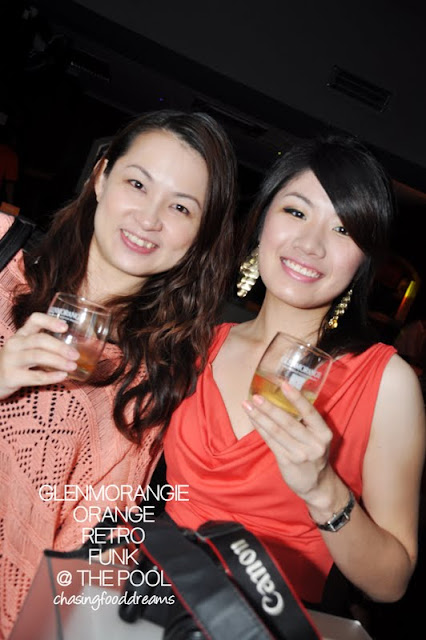 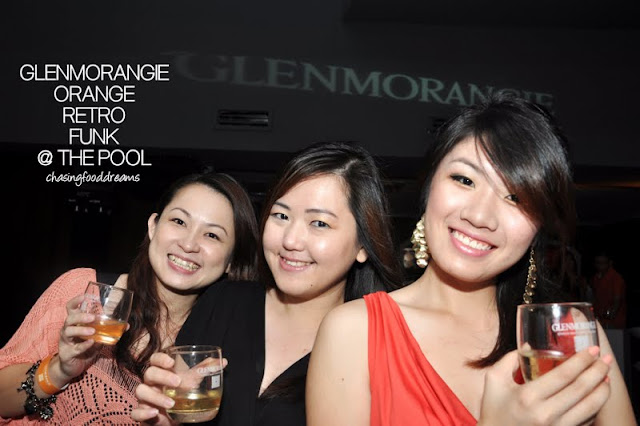 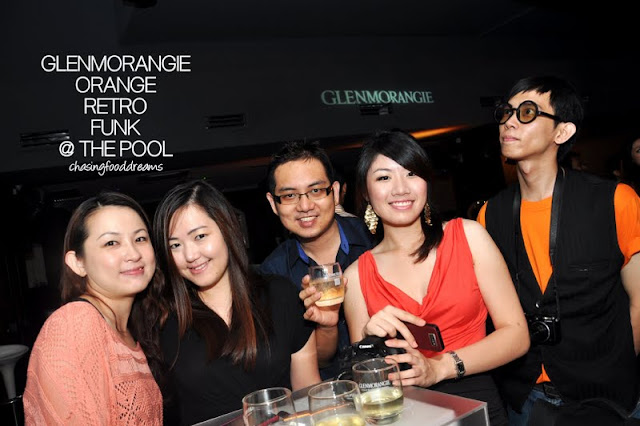 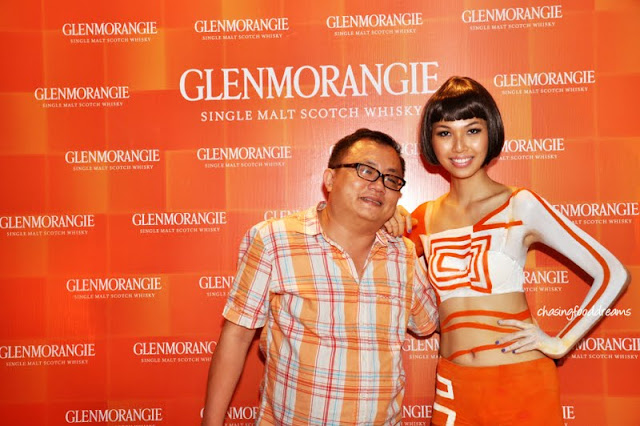 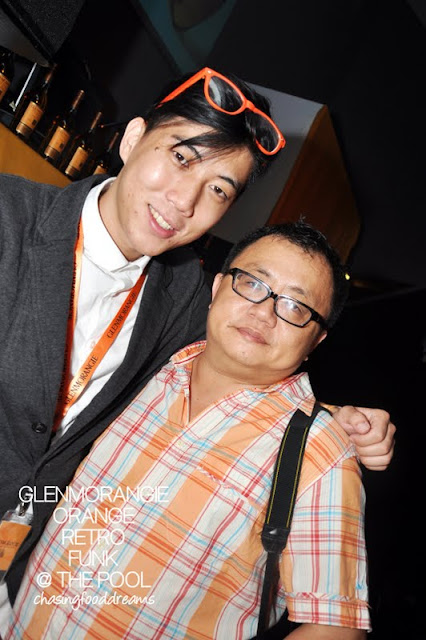 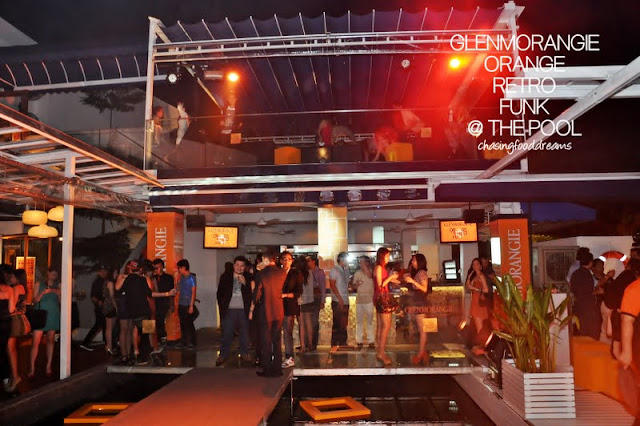 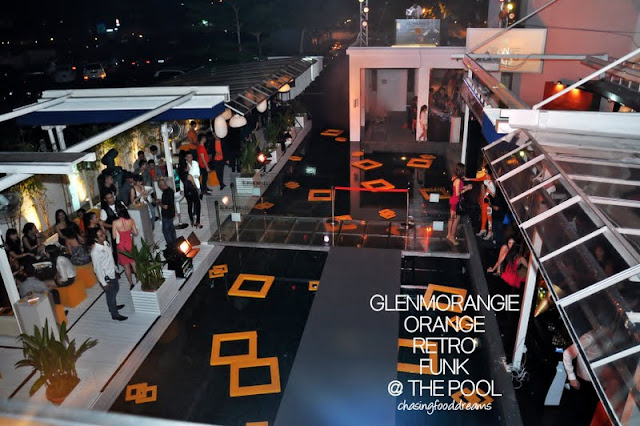 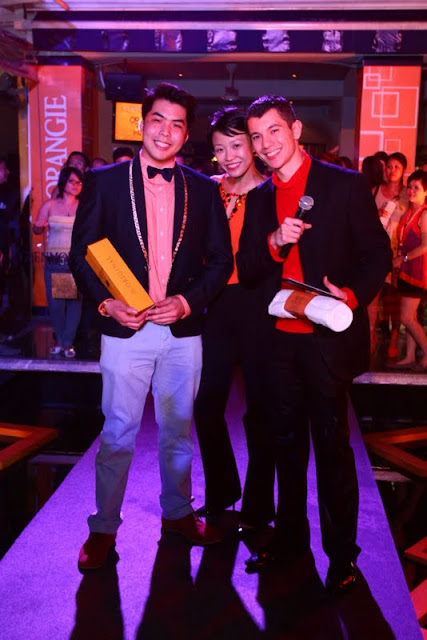 Stand up comedian Kuah Jenhan may have bagged the Best Dressed Award with his orange ensemble but lucky me also won a bottle of Glenmorangie, The Original, that night!! J 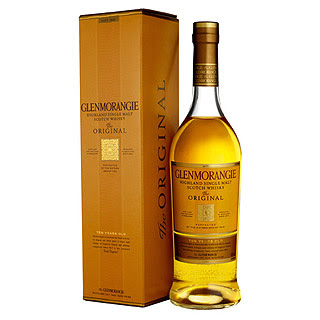 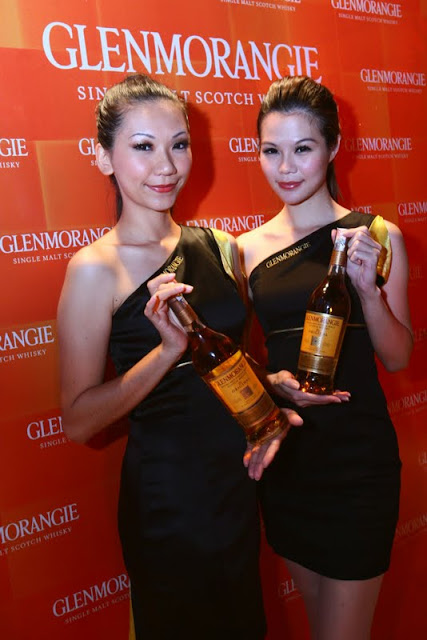 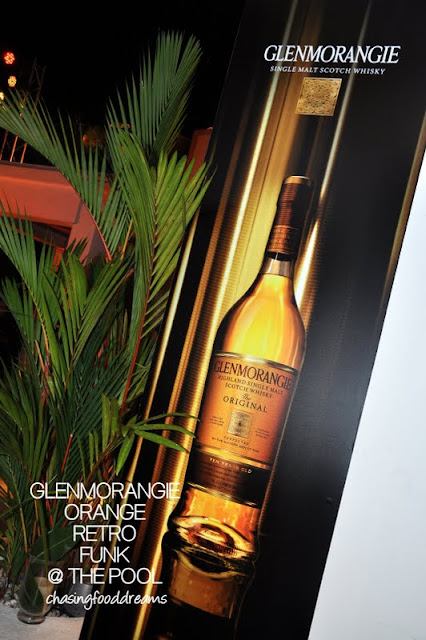 For those giving the Glenmorangie Orange Night a miss, look out for another not to be missed opportunity to familiarize with all things ‘Unnecessarily Well Made’. Come 11 April to 1 May 2012, Glenmorangie’s SOUNDFORM Fluid bar will be showcased in the North Atrium of The Gardens Mall, Mid Valley City. Whether you are a single malt aficionado, a fan of contemporary design, or just plain curious, be sure to head to The Gardens to catch the SOUNDFORM Fluid, which is a striking yet sculpturally functional illustration of Glenmorangie’s ‘Unnecessarily Well Made’ concept.
For more details on Glenmorangie, check out their facebook page at www.fb.com/GlenmorangieMalaysia.
*Pictures without my watermark are courtesy of Glenmorangie.