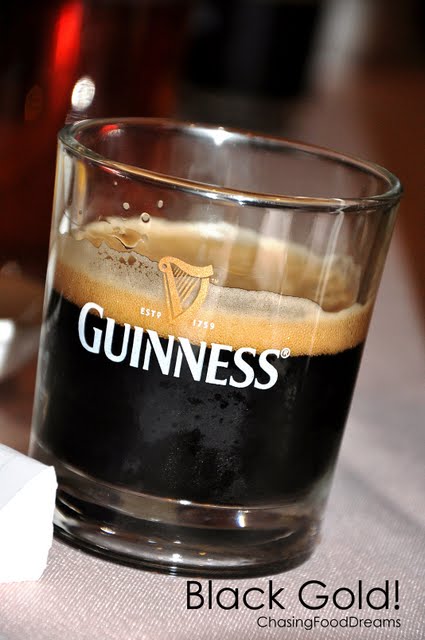 Ever since I had a taste of GUINNESS®, I have been craving for more. Not a beer drinker, I don’t mind having Guinness as there is just something quite soothing about the black stout. 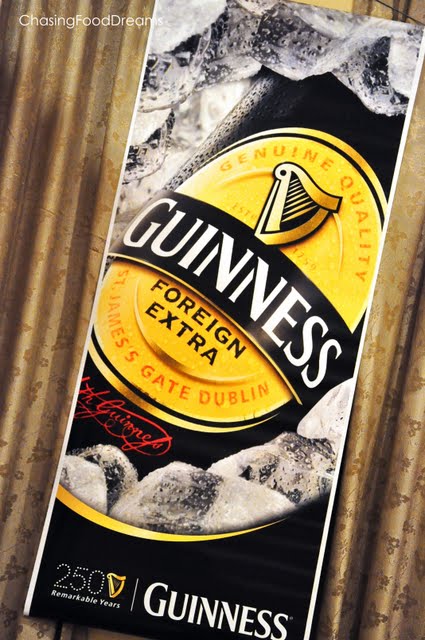 GUINNESS®, the iconic black brew has always enjoyed a revered status as a smooth and distinctive black beer for discerning drinkers all across the world. With its world renowned taste, unrivalled quality and hallowed heritage, it is certainly a drink of distinguished character. 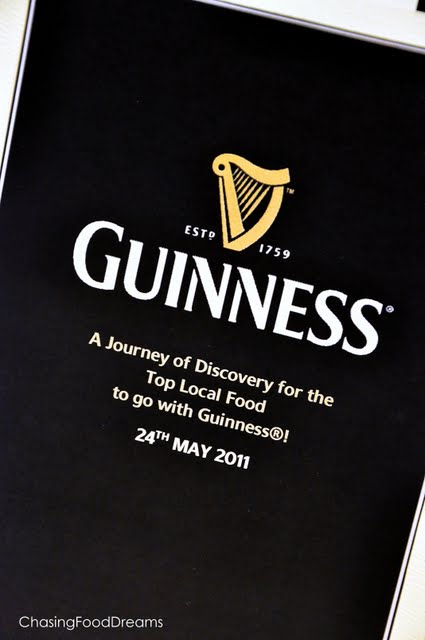 With a distinctive character of its own, it’s no wonder GUINNESS® is best matched when consumed with food with contrasting flavours and aromas. Its alluring malt and caramel aroma paired with its roasted bittersweet taste makes it the perfect combination for a variety of food, be it local or international. 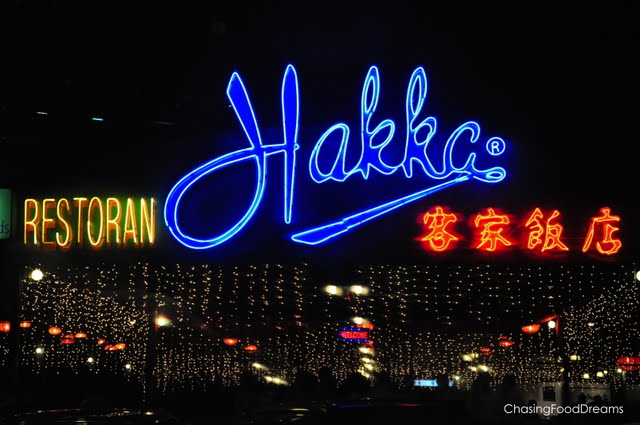 Another generous invitation from GUINNESS® led me to experience the Top Three Perfect Dish to go with Guinness Foreign Extra Stout (GFES) Restaurant Hakka in downtown KL. GUINNESS® has always been synonymous with Irish or Western cuisines, so I am curious about pairing this black beauty with our local cuisine. 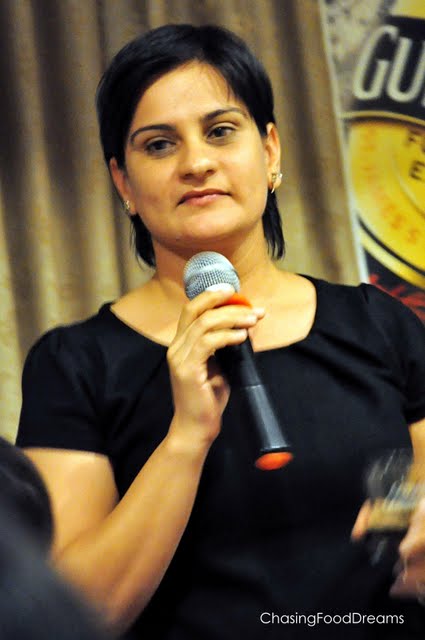 We were given a prepared tasting comment sheet for the various foods to be served but first, we were welcomed by Ms. Ramjeet Kaur, our host from GUINNESS®. According to Ms. Kaur, GFES will trigger different flavors with different food flavors. Some goes extremely well whereas others reflect an undesirable taste on the tongue.
We started off with a three way method to taste the black brew and this really geared up the entire guest that night with people starting to loosen up and chat excitingly among each other for what’s to come! 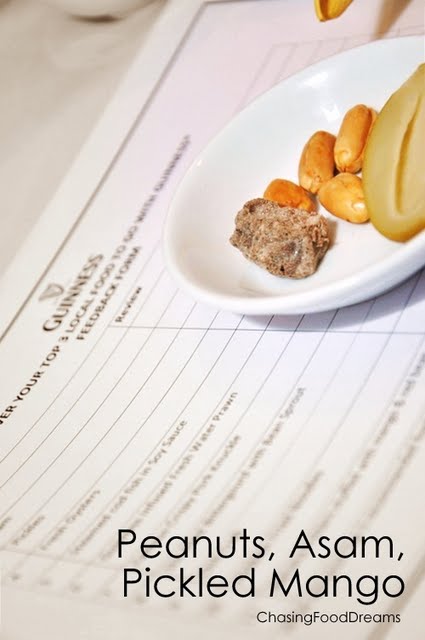 Peanuts seem to start off well as the saltiness of the nuts compliment the stout very well. Boi’s strong flavours were toned down after a sip of GUINNESS®. The last snack was Pickled Mango which left a bitterness end note for me. Guess which one I didn’t like? J 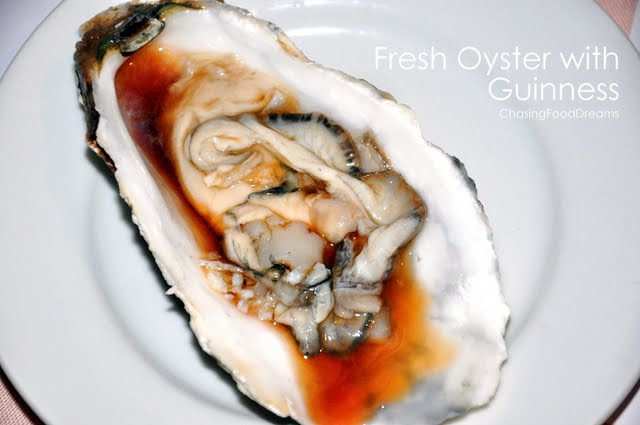 Before we were served the next course of Fresh Oysters, we had a GUINNESS® expert, Mr. Lim TB giving us a crash course on how to enjoy the dark brew with fresh oysters. Simply follow the following steps and you will be amazed on the pairing between stout and aphrodisiac shellfish! 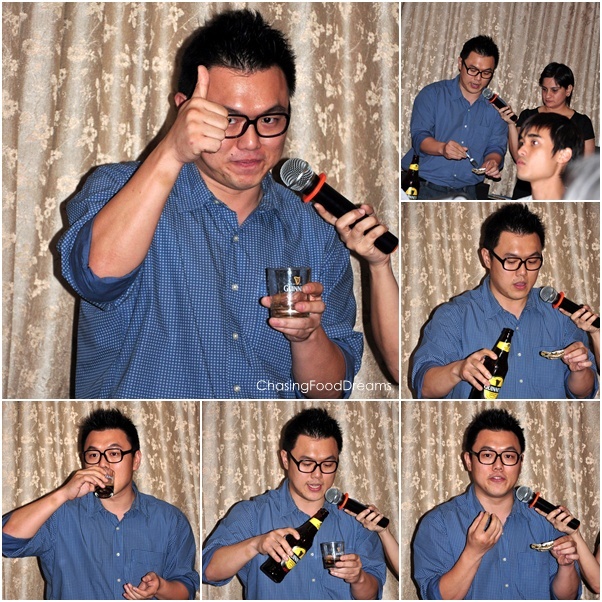 Steamed Cod Fish with Superior Soy Sauce was superb steamed and the flavours of the nicely balance soy sauce seems to enhanced the black stout harmoniously. Everyone at my table seems to quietly enjoy this pairing with great satisfaction on their faces. 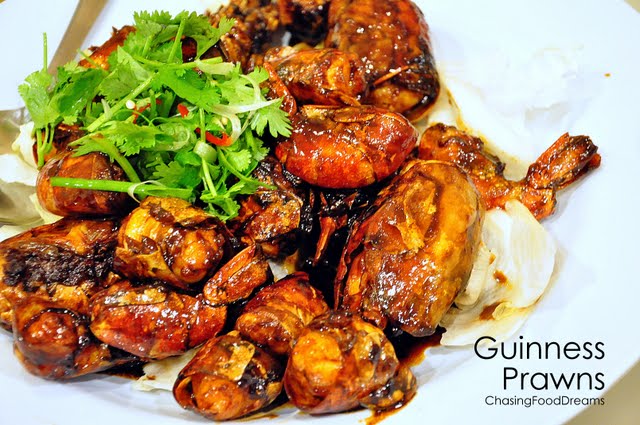 Guinness Prawns was so lusciously good. Basically, it had me licking my portion to the max. I have had Guinness with Pork but this is certainly a first for me with prawns. The chef did an awesome job with the black beauty for this dish. 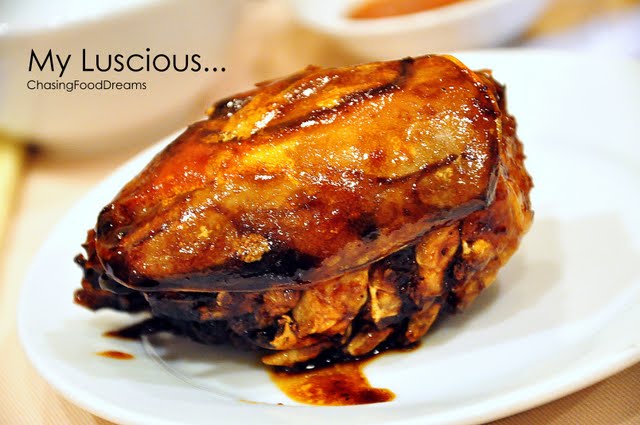 When cooked, the stout had reduced to a thick caramelized sauce that was deep and sweet, enhancing the prawns to its great height. Needless to say, Guinness stole the show in this dish! 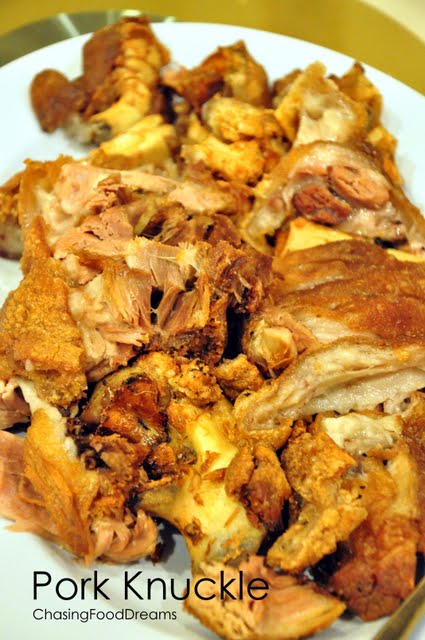 Porcine dishes are always one of my top favourite dishes. When Crispy Pork Knuckle appeared, every male in the room was gleeing with happy looks on their faces. There was not a doubt that this dish got everyone’s approval on the perfect pairing with the black brew. 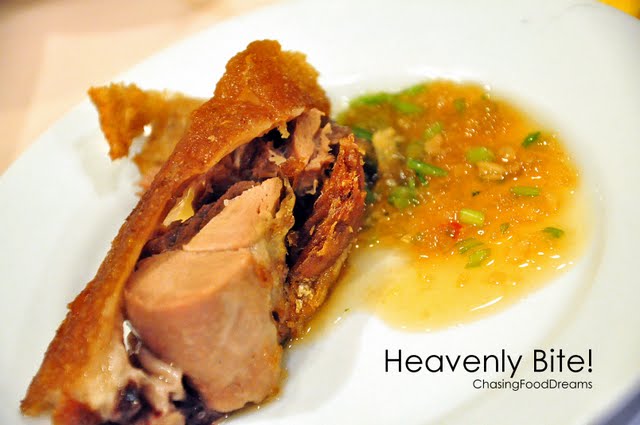 Crispy and juicy, the pork was not oily but rather luscious with the deep flavors of GFES! My table guests kept raving on this pairing being a perfect match made in heaven!! 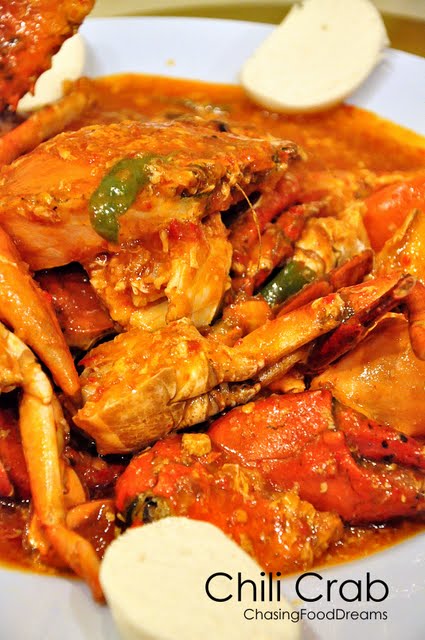 Just when I thought I could not enjoy GUINNESS® to further heights, Chili Crab showed up. I like this pairing a lot. The creamy sweet eggy sauce seems to smooth the robust stout and it was easy to enjoy this pairing while smothering the sauce with the steamed bread. 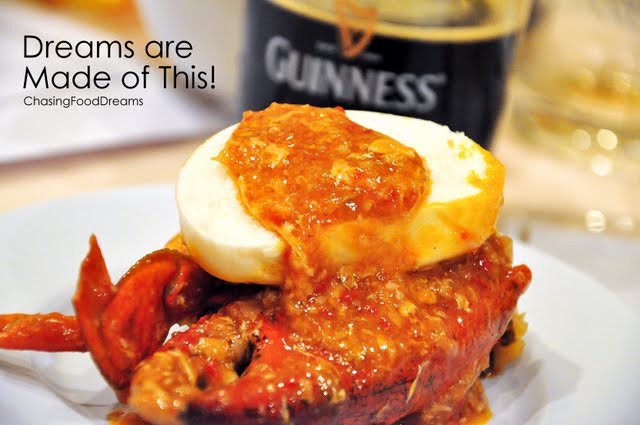 Just look at the glorious appeal of this fresh meaty crab claw with its luscious sauce and GUINNESS®. Muahaha…evil-li-lious! 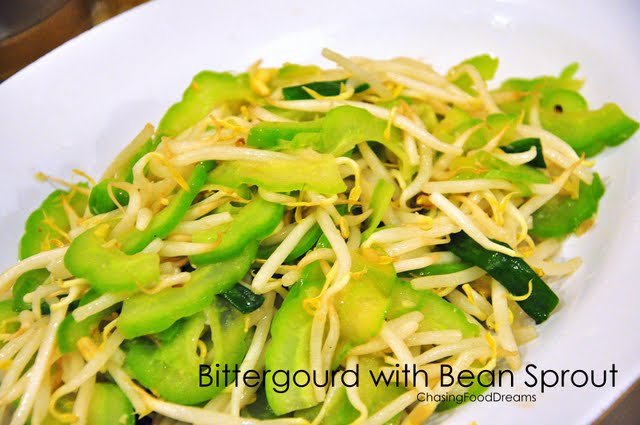 The next dish does not seem to go so well way even before it was paired up. My next to me guest quickly disclaimed a miserable look on his face when he saw Stir Fried Bittergourd with Bean Sprout. Expecting nothing but bitter flavors, he still gathered up his courage to try the pair but quickly confirmed that it was not a delectable match. I am a fan of the gourd but even I do agree with him that this pairing seems to only bring out the harsh bitterness of the stout with the bittergourd. Oh well, at least I tried, wink! 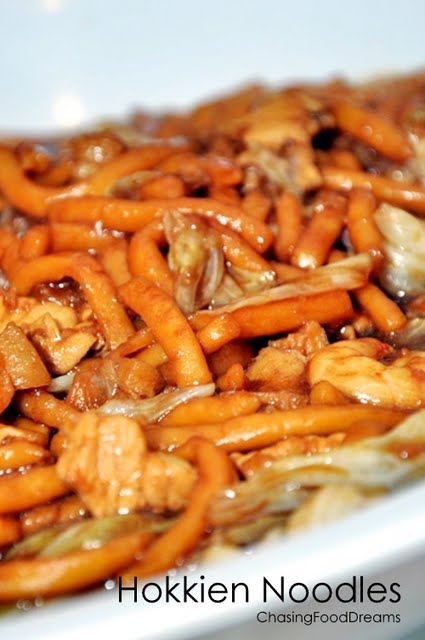 Ms. Ramjeet declared that Hokkien Noodle was one of her favourite pairing with GUINNESS®. I agree with her after a taste of the slippery braised noodles. I notice again, the slightly salty and sweet sauce in the noodles seems to enhance the flavors of the stout nicely, leaving an undertone of smoothness and aromatic scent of the deep dark brew. It may be a simple dish but it was definitely a gorgeous pairing in my opinion. 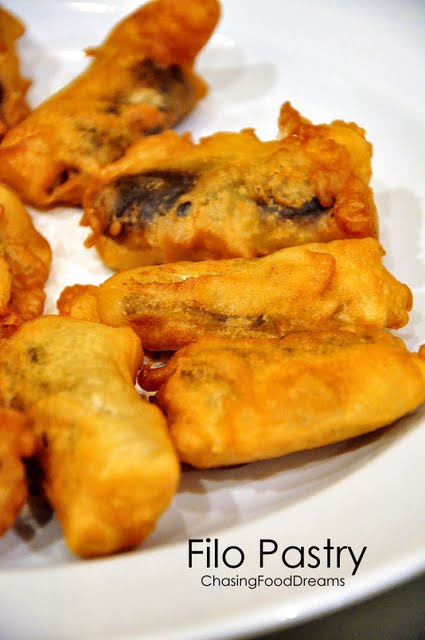 We were warned about dessert of Deep Fried Filo Pastry with Red Bean, Mango and Banana. True enough, the taste just doesn’t jive and cause a very bitter after taste. 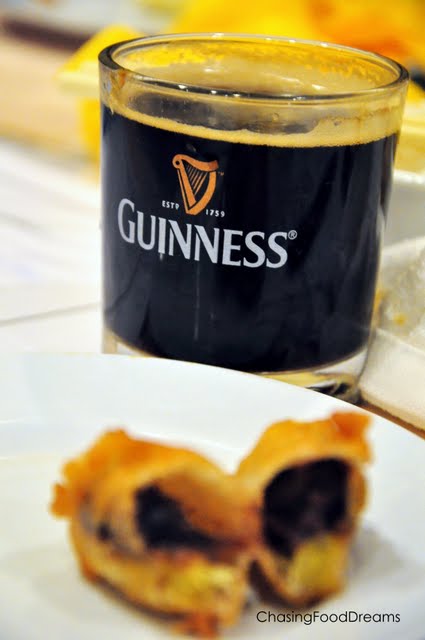 One of the distinguish guest in my table said that he will be able to soften the edge and make me enjoy this. He poured the GFES at a very high height into the glass very slowly, causing a great amount of foam (about half of the liquid) to be surfaced. He then let the stout sit for a few minutes to let the creamy foam disappear and then ask me to try this again with the pastry. Surprisingly this time, the pairing seems to mellowed and after a few more sips and bites, it was quite enjoyable unlike my first taste. Was I convinced or was it just my imagination influenced by the guest? Guess I would have to try this again to confirm my answers… J 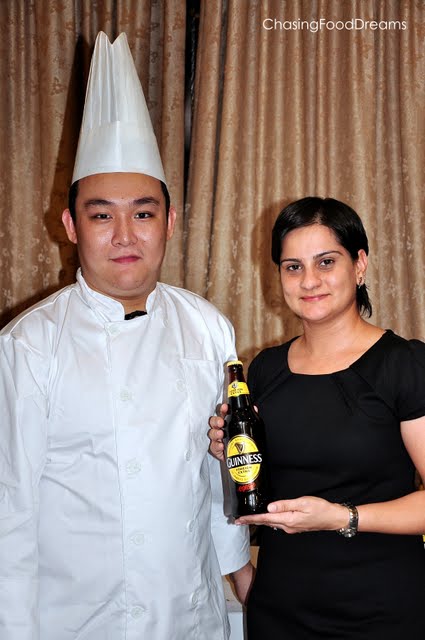 Chef Jackson Chong, the man responsible for the lovely dishes was surprisingly young but raw talent doesn’t discriminate with age, was seen here posing with the lovely Ms. Ramjeet and GFES!


The results were disclosed with the Top Three Food that accompanied GUINNESS® extremely well among the guests that night was Crispy Pork Knuckle, followed by Guinness Prawns and Steamed Cod Fish respectively!
My favorite Top Three Dishes that I love with GUINNESS® was Guinness Prawns, Chili Crab and Hokkien Noodles. 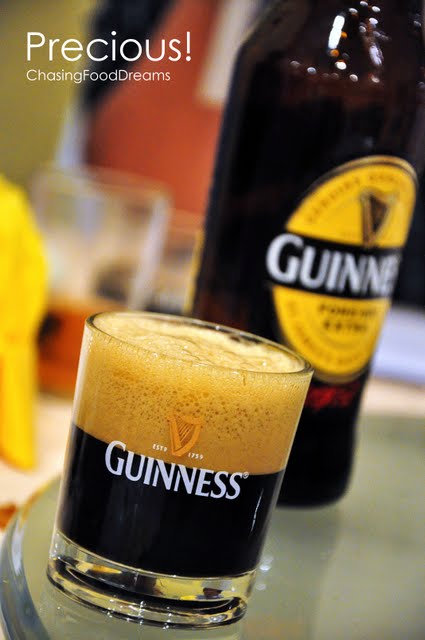 My overall verdict was that GUINNESS® seems to pair well with salty and sweet flavors compared to bitter and sour flavors. Certain fruits also bring out a distinctive after taste with the black brew while others enhances it gracefully. The experience certainly enhances my knowledge towards the luscious brew and I cannot wait to try other local cuisines with GUINNESS®!
So the next time you stop by your favourite hangout, be sure to try GUINNESS® with your favourite food and be prepared to be pleasantly surprised! GUINNESS®’s nationwide promotion in conjunction with its recent win of the GUINNESS® League of Excellence Award is still available for its adoring fans and drinkers over the next month. Consumers can take this opportunity to say cheers with GAB’s portfolio of the world’s favourite brews at their favourite pubs and bar, as well as hypermarkets and supermarkets nationwide.
To be part of this gastronomic exploration, consumers are encouraged to explore their favorite local fare paired with GUINNESS® and share their Top Picks with us by posting it on our facebook page, www.facebook.com/guinnessmalaysia.
Email ThisBlogThis!Share to TwitterShare to FacebookShare to Pinterest
Labels: Beer, Chinese, Invited Events, Kuala Lumpur, Pork