Restaurant Woo Ng Kee: A Blast From The Past! 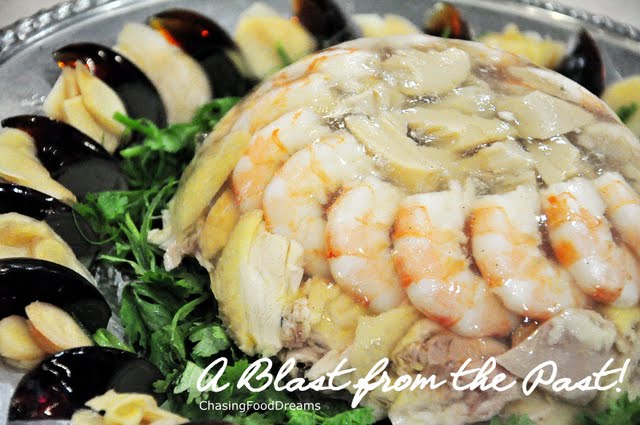 If you had read my previous post about Woo Ng Kee, you would know that they are one of those old school restaurants that believe in preserving traditional cuisines from the past! The owner Mr. Woo believes in keeping to his father’s legacy and has even trained his son to keep the family legacy going. 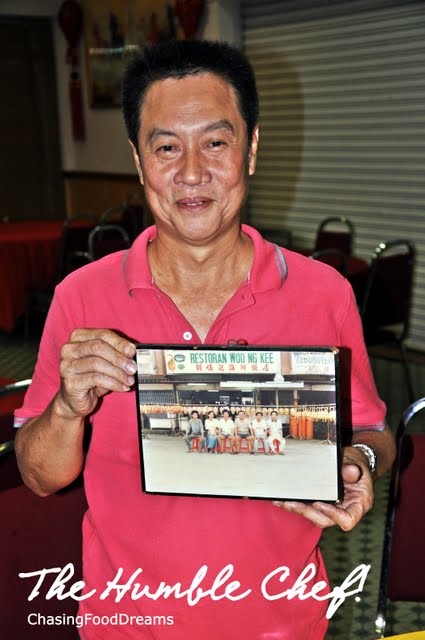 Mr Woo seen here proudly shows us a picture of him and his father during a festival season where ducks were all nicely line up to dry in the sun before roasting. I also found out that Mr Woo’s brother owns the famous roast duck called Onn Kee in the Kepong ‘Wai Sek Kai’ Street!
We were delighted and honored to experience dishes from the past by Mr. Woo, recipes handed down from his father. A truly unforgettable dinner it was that night, we dined on dishes previously enjoyed by our parents and their parents. Mr. Woo, a humble chef was truly proud to be able to share these moments with us and we were certainly ecstatic to be able to savor such classic almost-forgotten dishes that night! 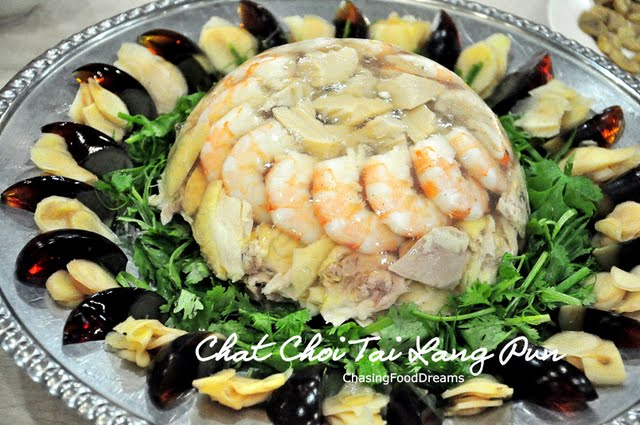 We started off already in awed at the first dish of ‘Chat Choi Tai Lang Pun’ or Traditional Cold Appetizer with Aspic (RM80). This dish is certainly a classic that goes way back to historical time where it would only be served for special occasions due to its lengthy preparation. It’s quite sad that this is rarely seen in restaurants and the younger generations seems to have a lack of appreciation for this cold savory dish.
Although the dish signifies its existence from Chinese, I found this to be linked with European historical dish with similar recipes. Aspic is a dish where meats or seafood is set in a savory gelatin stock. Traditional aspic dish does not contain gelatin to solidify the stock but instead uses a huge amount of meat to boil the soup till it congeals from the natural gelatin found in the meat. This dish is usually savory and served cold. 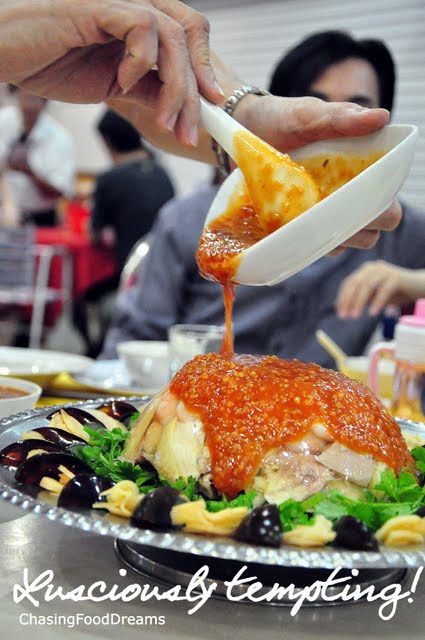 I was hypnotized at this heart achingly gorgeous mount of seafood and poultry in aspic. The presentation was majestic with a humbleness of quartered Century eggs and pickled ginger slices framing the centerpiece.  Mr. Woo poured a slightly sweet red sauce all over the dish and we dived right in! 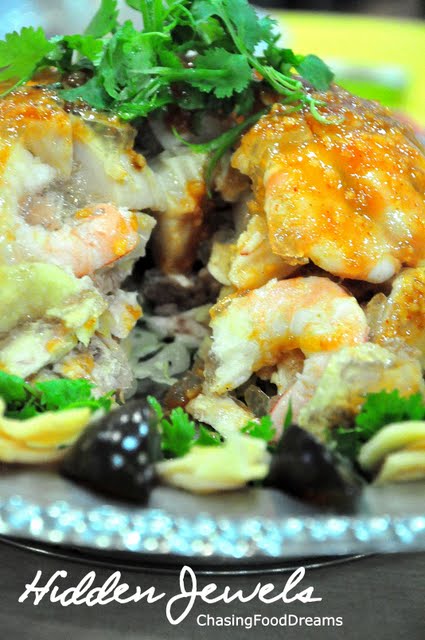 Chunks of poached kampong chicken, fresh prawns and hunky pieces of abalones were beautifully arranged and set in savory aspic broth which had a perfect balance of flavors and taste. It was light, refreshingly cold and so addictive that I found myself spooning mouthful of this cold appetizer with mustard. 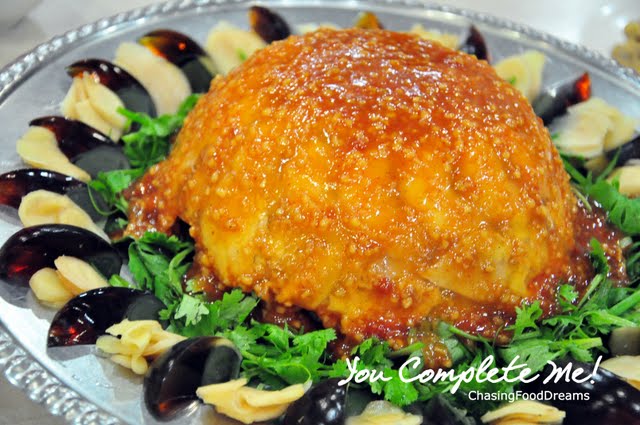 How on earth can a gastronomical dish like this be almost forgotten seems to amaze me? Come on people, we need to bring back such dishes... If I may borrow a line from Jerry Maguire, I would say to the dish, ‘You Complete Me!’ J 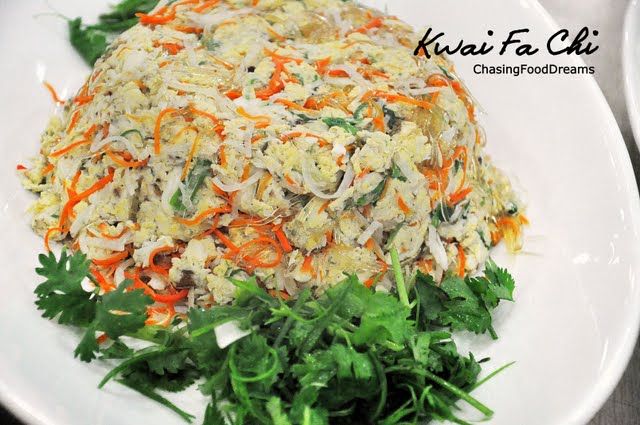 The second dish is one of my favorite classic dishes, ‘Kwai Fa Chi’ or Scrambled Eggs with Shark Fins (min RM30 and above), which can still be seen in some restaurants today. In fact, this is one of the simplest dish to prepare but it takes skills to control the texture and taste of the dish. A generous portion of scrambled eggs in light pale yellow with strips of orange carrots were cuddled with ‘Mei Chi’ or shark fins. We were also served a huge portion of crispy iceberg lettuce to be wrapped with the eggs. 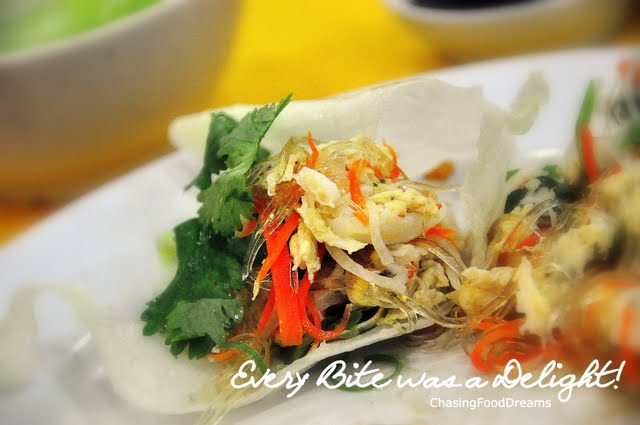 A bit light on flavors, the texture of the eggs was executed quite well. A significant amount of crab meat (real McCoy!) was also present, lending sweetness to the dish. Wrapped with lettuce, the texture was crisp with soft eggy flavors and light! It could use a bit more salt but no one was complaining at our table… 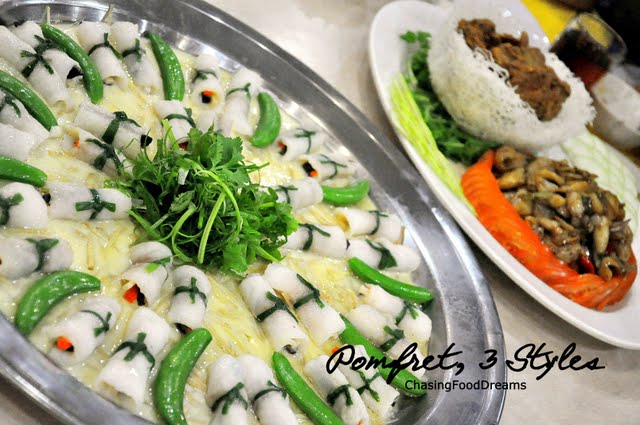 I had fish two styles before but Pomfret, One Fish Three Styles (RM170)? This dish arrived in grandeur on a huge silver platter with another large platter on the side. Both platters vying for our attention with its trio cooking style! Mr. Woo mentioned that a huge pomfret is required for this dish alone due to its many cooking style involved. 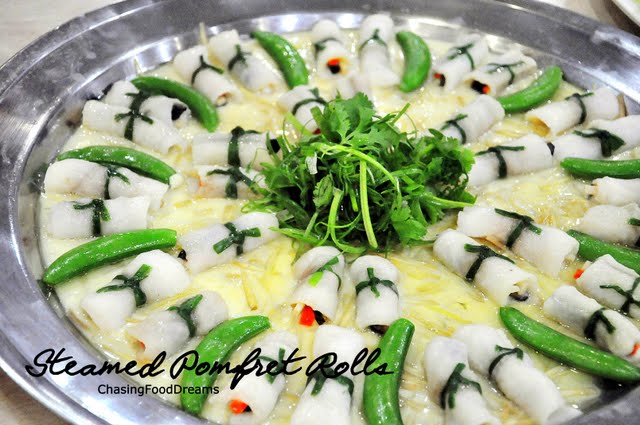 The silver platter consists of perfectly thin slices of Steamed Pomfret Rolls with strips of vegetables and tied with scallion. Such meticulous work of art and it’s visually stunning as well. The fish rolls were perfectly steamed with the pale golden egg, ginger shreds and snow peas. Eat this when it’s hot as it was melt-in-mouth tender with a crunchy of the vegetables. Naturally sweet and a hint of wine were detected in the fish and egg. Classy and certainly a sight to behold! 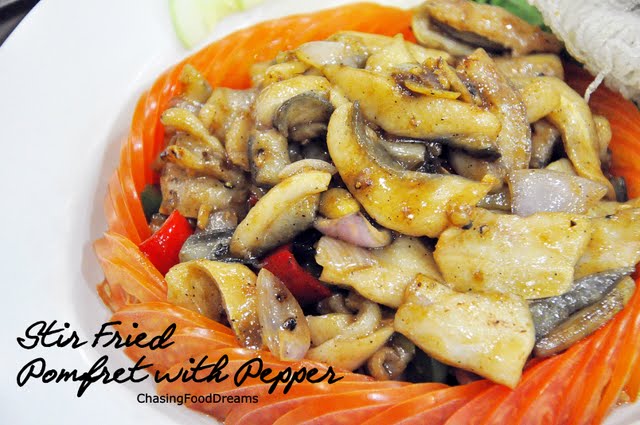 The second platter had Pomfret Slices with Pepper and Crispy Pomfret Bones. Stir fried, the thicker pieces of Pomfret had a firm texture and were enhanced by the black pepper to boost up the flavors. 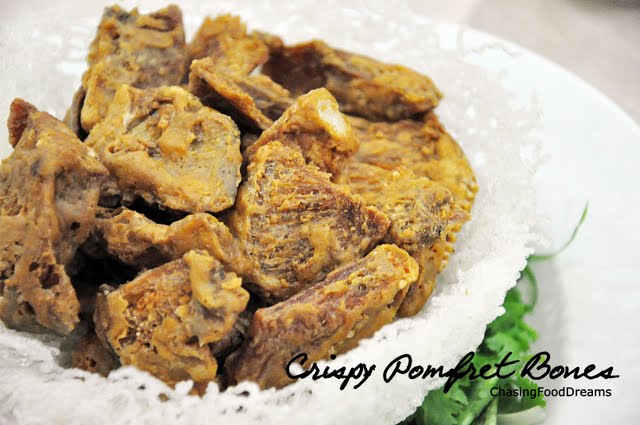 I simply adored the Crispy Pomfret Bones as it felt like I was eating cracker instead of bones. Easily addictive and would go well as snacks. 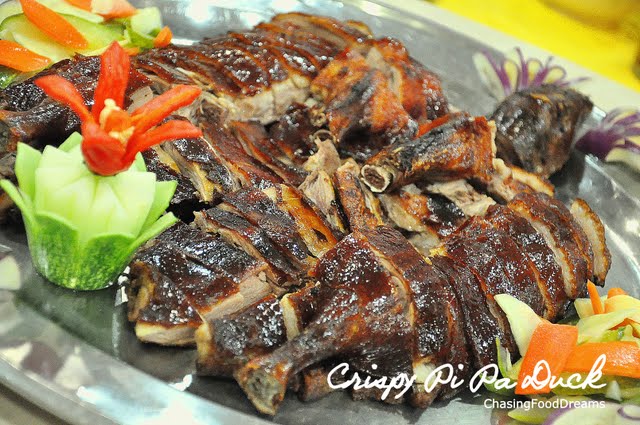 ‘ Pa’ Duck (RM38 whole duck) was another timeless dish that my parents used to savor when they were young. Named to resemble the Pipa instrument, the duck is flatten to an oval shape before being baked till golden. Before serving, the duck is usually given another bathe in oil to crisp up the skin. This duck has less herb aroma than the restaurant’s signature roast duck. Nonetheless, it was still moist, tender and crisply succulent! 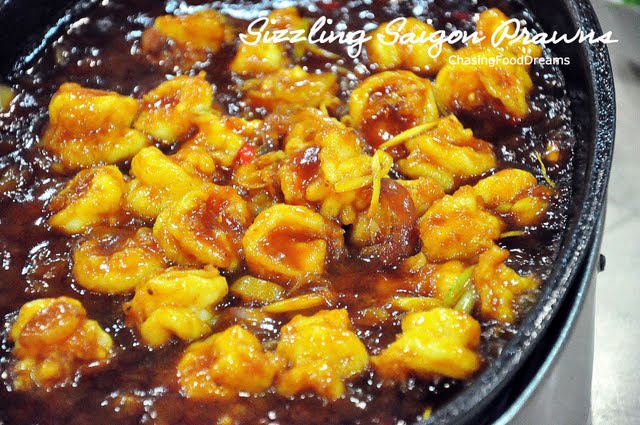 ‘Tip Pan Sai Gung Har Kow’ or Sizzling Prawns (min RM18 and above) sizzled in a copper plate. The prawns were doused in a sweet and slightly sour sauce and the copper plate keeps the dish warm. I was told that Mr. Woo had specially ordered copper plates as these will not rust unlike those normal hot plates. Prawns were bouncy and the gravy goes well with white rice. 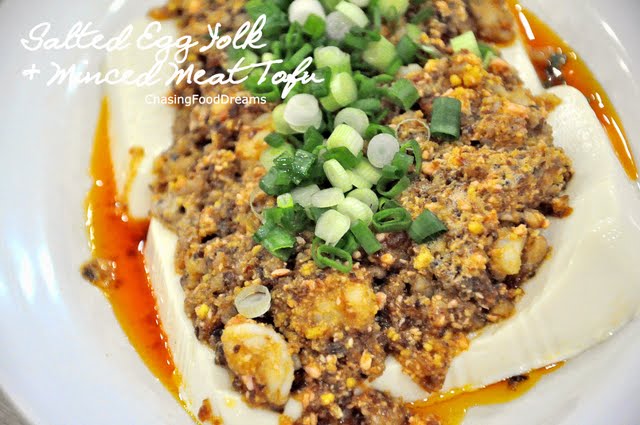 One of my favorite dishes that night was a simple Salted Egg Minced Meat Tofu (RM10 and above). Silky smooth tofu was encrusted with minced pork, chopped prawns and salted egg topping. Salty and robust, the taste was delirious and I love this with the plain tofu. I would order this anytime! It’s something simple and pleasing; showcasing comfort food that one can eat on daily basis. 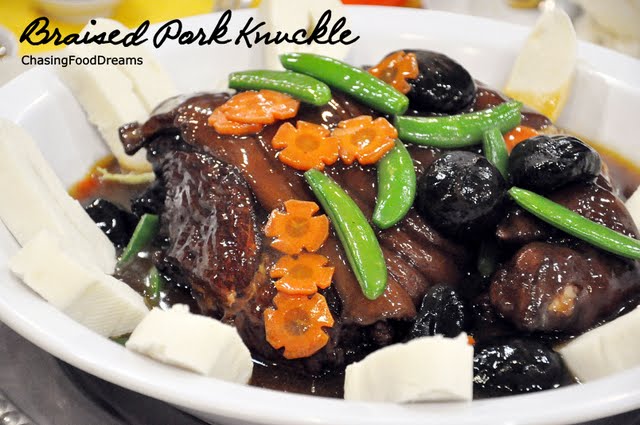 Just when I thought we were done, Mr. Woo brought out a colossal Braised Pork Knuckle or ‘Hong Siu Chu Sau’ (RM35 half portion & RM70 full portion) with steamed buns. This mammoth of a knuckle was beautiful braised till dark golden with plenty of luscious gravy to be mopped up by the buns. Savory and succulent, the skin was meltingly tender while the meat was moist and juicy. Braised for hours, the meat flavors were deep and enticing. I managed to eat some despite being full… yum! 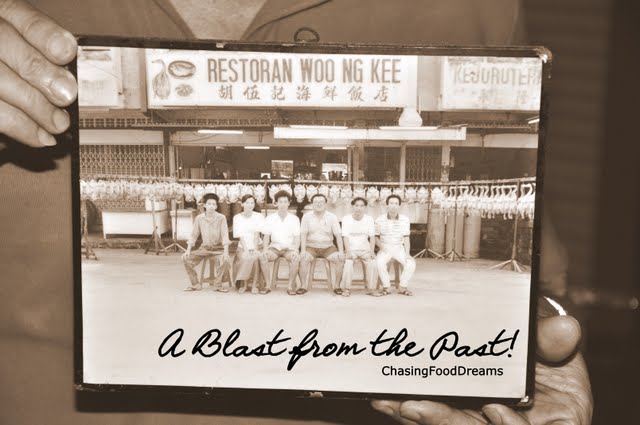 I find this meal very nostalgic and comforting in every bite. Mr. Woo certainly showed us what meals were like during our parents’ era and I am very glad to be able to experience this. Dishes here are truly old school charm and I would recommend this place if you wish to bring your family here for a Blast from the Past! 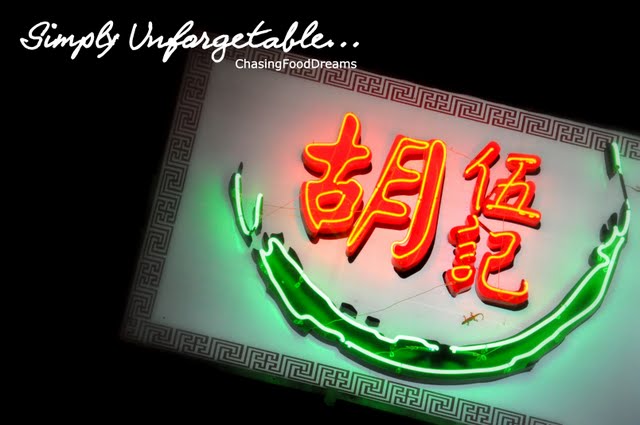