When one mentions , first thing that comes to my mind is F.O.O.D! J
, my hometown, has been listed in several lists from magazines and blogs for its unique fusion of cultures and food. I m very proud to call my hometown and would love to be able to retire here one day.
During the CNY holidays, I returned home to the island as usual to spend some time with my family. As usual, I would have planned some must haves when I hit the food paradise of the island. Since it’s the holiday, I am hoping some of the places would be open for business.
I was craving for a good plate of char kway teow and koay chiap since I don’t seem to find a good one that I like in KL. I remembered my dad used to like this koay chiap stall in the older area of . This koay chiap is the only one he would eat as he declared this to be the most consistently well flavored koay chiap in !
Koay chiap is basically a flat rice noodle (kinda like koay teow but in short pieces and not as oily) soaked in a very dark flavorful braised duck and pork soup with spices. 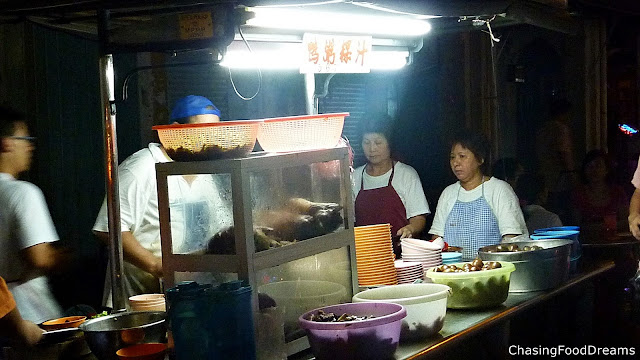 This koay chiap stall has been around for ages and is located in Kimberley Street. It is only open for business at night and tends to be super busy even on non holiday season. Locals know to get there early as the koay chiap tends to get sold out early on busy days. The owner makes everything from scratch from the rice noodles to the chili sauce within his family members. The quality is very consistent and one can always expect nothing less but perfection from this stall. The ingredients on the stall are just the tip of the iceberg as I saw more stuff being brought over later on to add to the brisk business. 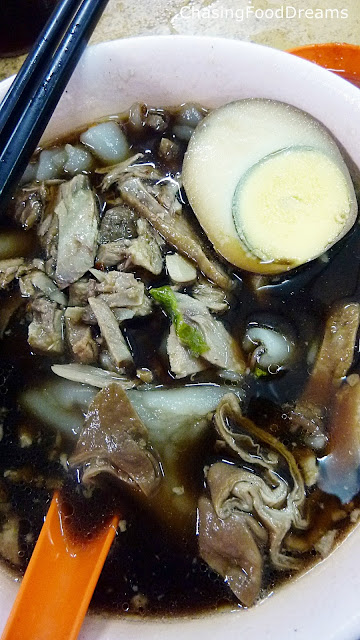 My piping hot bowl of Koay Chiap. The koay chiap comes with shredded duck meat, some offals and half a braised egg. I just loved the soup. The aroma is really luscious with hints of cinnamon and star anise. Dark, tasty and simply delicious, I drank every bit of the soup. 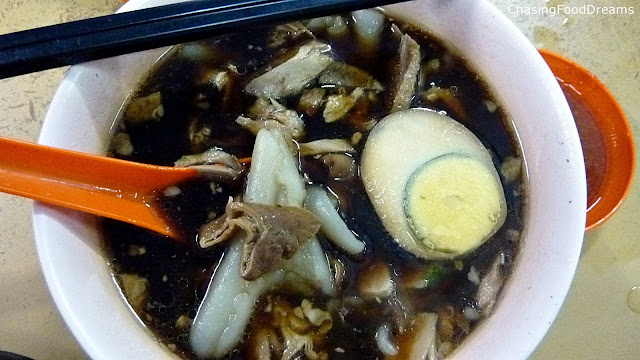 The rice noodle itself was soft and slightly chewy with its accompaniments of the tasty shredded duck and chopped offals, it is really comforting and brings back memories of my Dad. I can have two bowls of this except I was saving room for some other goodies. The garlic chili sauce was really a perfect match for the soup and its ingredients. Sigh…with happiness!
Besides koay chiap, I had heard much about the char kway teow with prawn mantis in the same area. Game to try this, I guess I had too much expectation for it. Another surprise was that I saw a very young man busy stir frying the kway teow. I was expecting an older man but thought maybe its son took over. 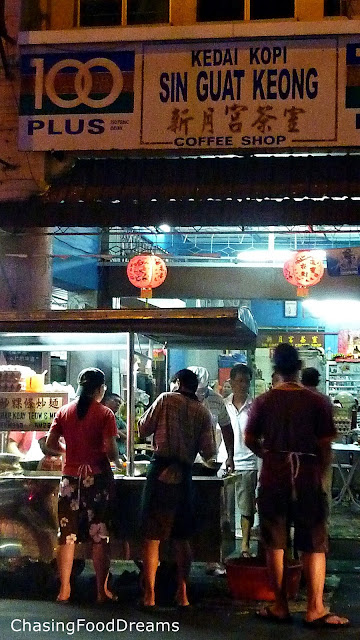 I was informed that they do not have prawn mantis as it was the new year, hence they offered fried fish pieces as a substitute. I took one look and denied the fish and ordered a regular plate of kway teow.
There is something distinctive about the taste of char kway teow (CKT) which I cannot find in KL. The taste of the lightly seared pieces of kway teow full of wok hei and its soy sauce with chili and prawns is just so satisfying. 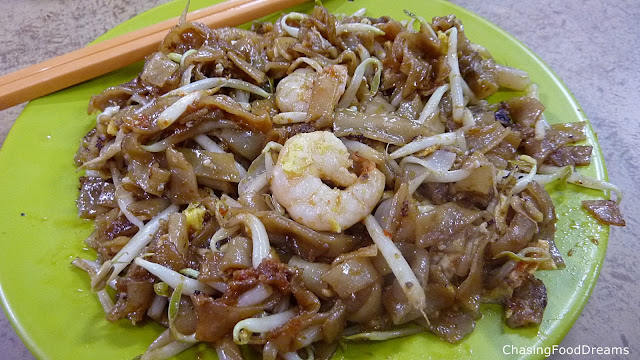 My plate arrived and it looks plain. I had read about a wait for this CKT but I guess I was wrong as my plate arrived few mins after ordering. The CKT had some wok hei but I find it did not live up to the expectation of what I had read from other blogs. It just doesn’t look the same as other blogs. Then it occurred to me that the original stall may not be open due to the holidays and this could be an impersonator hoping to rope in some business? Or could it be the owner’s son standing in for his dad? Anyway, the CKT is ok and tasted average.
Business is still brisk for the CKT stall though as there is a few people waiting for it. One can sit comfortably in the Sin Guat Keong Coffee Shop and order the food in unless you like the dark narrow side lanes among the stalls. 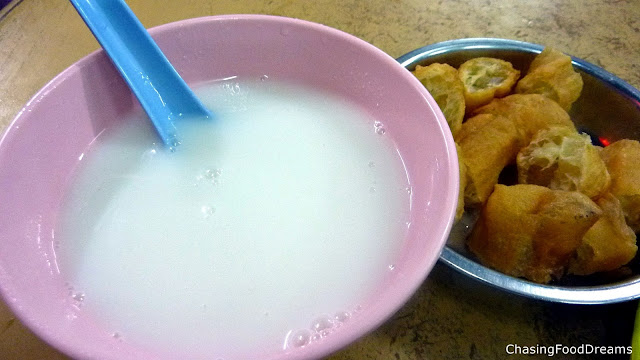 Another popular stall is the Dessert stall which has a few various tong shui. There is the popular leng chi kang (longan dessert soup), red bean and almond tea with yau cha kwai. We ordered an almond tea with the yau char kwai. This was good as the tea was really yummy and consistency was thick enough without being too gooey. Yau cha kwai was fresh, crispy and delicious!
Thumbs up for Duck Koay Chiap! Simply divine…J
Kimberley Street Duck Koay Chiap
Sin Guat Keong Coffee Shop
Lebuh Kimberley,
Business Hours: around 7pm, sells right through 11pm or till it runs out
Closed on Thursday