First day of CNY, we went vegetarian the full day. Second day of CNY, my family will go full speed to start the day with abundance of M.E.A.T to signify abundance of prosperity to come in the year!

We went to another elder relative house for brunch to gather again for the 2nd day. I decided to contribute roast pork aka ‘Siew Yoke’ to the meal since we were going meat anyway. This uncle of ours will cook up a storm of yummylicious traditional dishes usually and this year was no difference.
We arrive around 11am starving for meat (cos we only had veggies the day before)...J 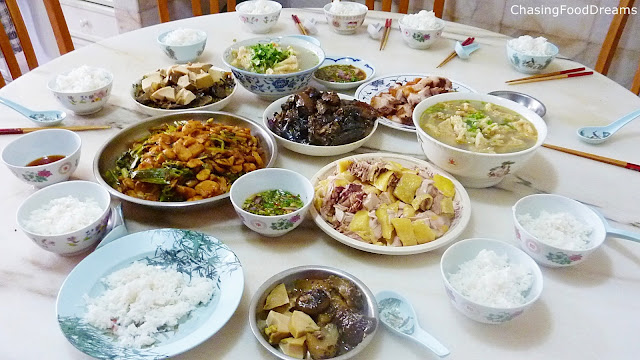 Check out the array of traditional Hakka dishes we had that day! 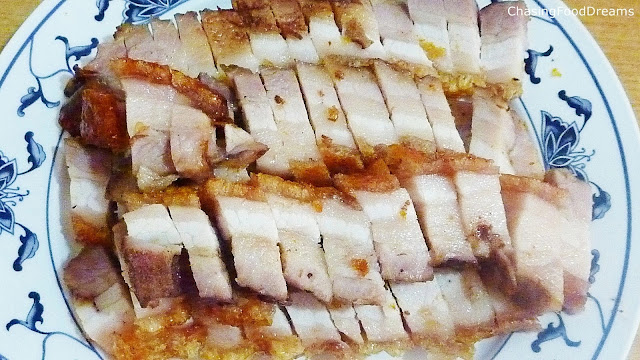 Let’s start off with my contribution of roast pork. I marinated the pork few days before and only roasted the pork that morning, hence it was piping hot with super crispy and crackling skin! 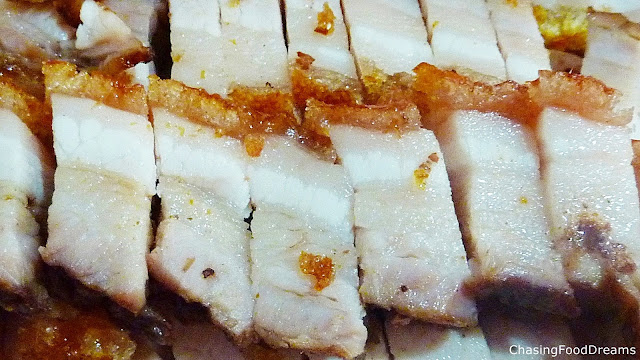 A close up view of the addictive roast pork with layers of tantalizing meat and fat. Super crunchy goodness, salty and moist, 3kg of pork fed 20 adults. There was none left as most of the cousins fought for the freshly roast pork to the end! I’ll post up the recipe for the roast pork in the coming round. The moral of this is that one can never have too much roast pork…kekeke
Uncle went generously overboard this year and added a special chicken to the meal. This chicken is unique because it has been castrated since it was a chick! Castrated chicken or ‘Yim Kai’ is expensive and cost a minimal of almost RM200 each as these are exceptionally large male chicken with exceptional taste due to the castration. We had two yim kai that morning! 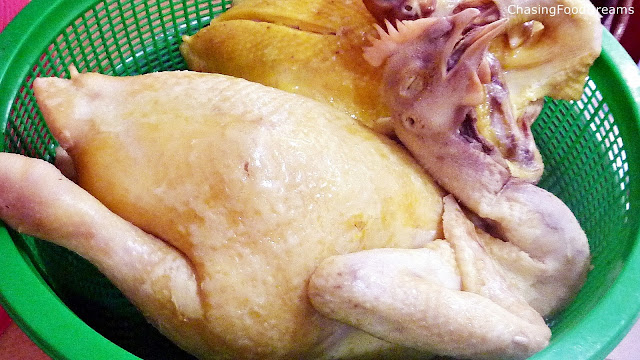 Check out the special chook before it was cut up into bite size pieces. 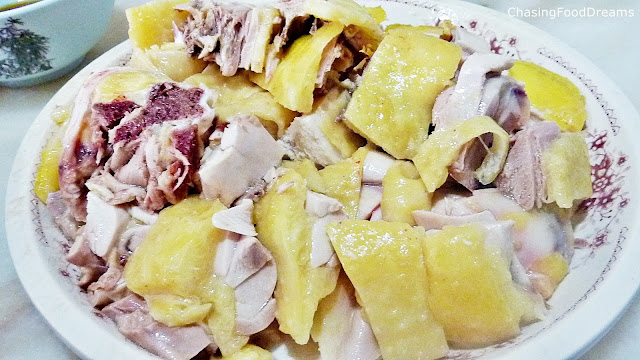 The taste of the chicken meat is stronger than normal chicken and flavor is really divine. Smooth, moist and with a bite, the chicken meat and skin was really wonderful. This is such a luxury as one would not normally buy such an expensive chook for daily consumption. 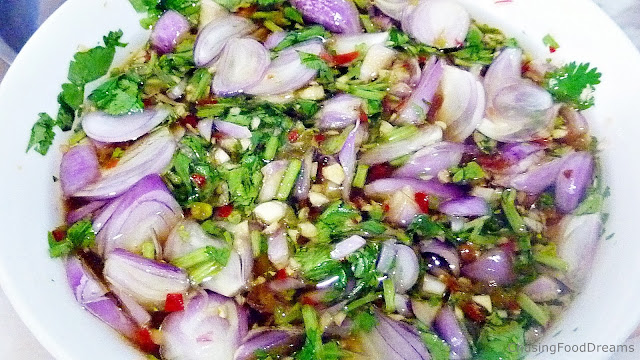 Uncle made a really piquant sauce to go with the boiled yim kai. I kept dousing the chook with the sauce as I love the sauce so much! Fresh shallot, garlic, chili, coriander, soy sauce and some other seasoning, the sauce really compliments the chook like yin and yang. Forgot to ask uncle for the recipe, maybe next time when I visit him again. 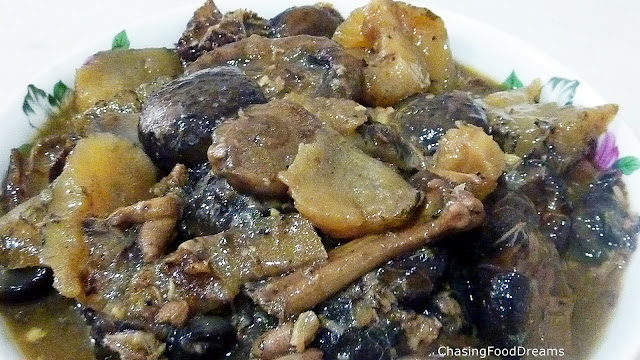 Next up was a luscious braised sea cucumber, mushroom and chicken feet. Full bodied, the flavor was bold and gorgeous. Beautifully braised, gelatinous sea cucumber made its appearance as the star of the dish until something else took over…. 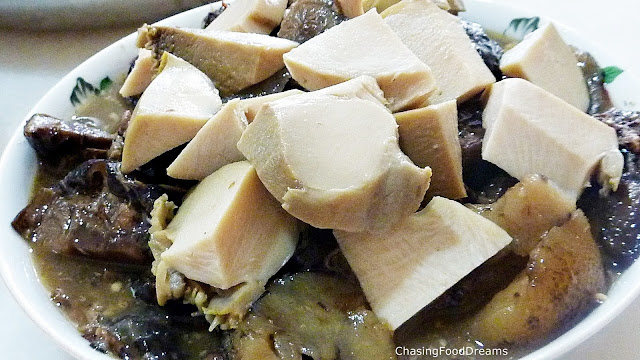 Uncle went overboard again and top up thick big chunks of abalone onto the braised sea cucumber! I was told uncle bought 3 cans of abalone for this dish. We are so lucky this year since uncle went super generous with the pricey ingredients. I think he must have prospered some digits few months back, hence decided to treat all of us to such a outstanding meal! 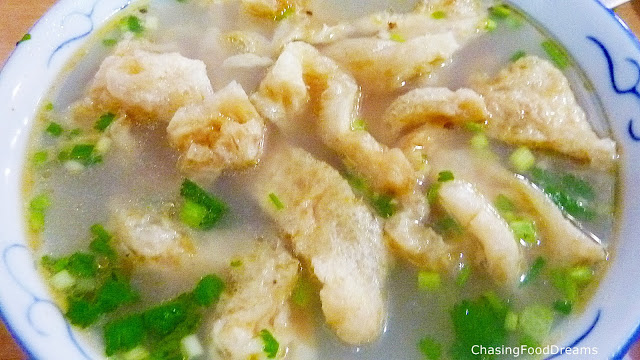 We had another obligatory dish of pig stomach and fish maw soup. Fish maw is super expensive as it is considered another prized ingredient. Our soup was really loaded to the brim with fish maw. Peppery and divine, this soup really warms the soul! I drank loads of the soup as it is really comforting and stimulating to the body. 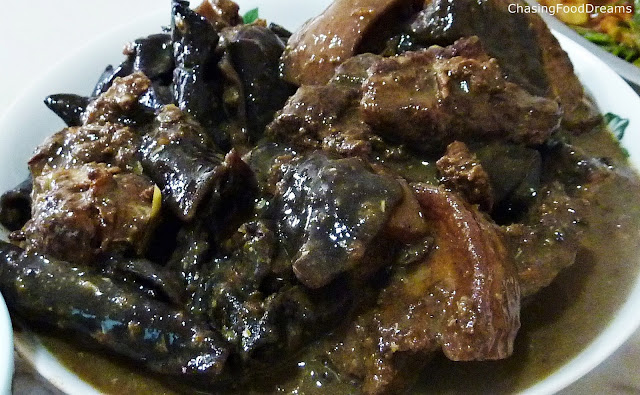 Another famous Hakka dish of braised pork with black fungus and fermented red beancurd (fu yue) or ‘Cha yuk’ also made its appearance that day. Uncle said a good cha yuk must have a good five spice seasoning. The pork is marinated and then deep fried to super crispiness before braising it in the fermented red beancurd and black fungus for hours. Another pungent flavor dish fighting for a role in that day’s meal. J 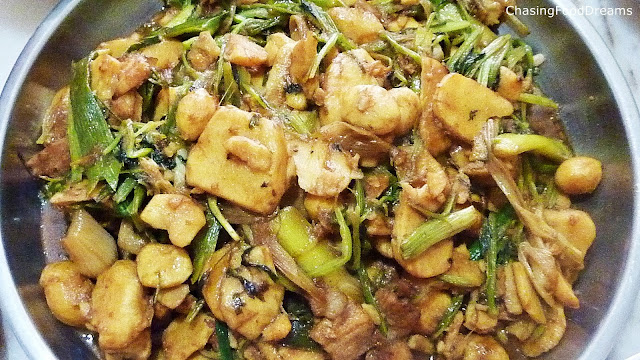 Last but not least, we had another famous CNY root vegetable called arrow root or ‘Nga Ku’. Mostly available during CNY period, this root vegetable will made an appearance in almost every household in various forms. Uncle bought two types of arrow root with one being a small round version and the regular bigger version. Both types are peeled, with the bigger ones cut into slices, stir fried with plenty of leeks and pork slices in a dark oyster sauce till really fragrant. This is eaten wrapped in ‘Sang Choi’ but I prefer it with rice.

By the time the meal was over, I was meat out…hehehe! After the meal, I headed over to another relative house to visit before leaving for my hometown .
Thank you very much Uncle for such a heavenly meal!
Stay tune for the coming eating frenzy adventures…
Email ThisBlogThis!Share to TwitterShare to FacebookShare to Pinterest
Labels: Chinese, Chinese New Year, Holiday Treats, Homemade, Meat, Pork