Have you ever had a day where anything that can go wrong, actually went wrong? Sigh...Oh well, it did gave me a reason to drag someone there to have an awesome lunch!

I have been hearing about this really awesome chef, Chef Ken, who had a cafe awhile back in Menjalara area but left to pursue further career in Aussie. Well, he is back! He is the owner of Silver Spoon Trattoria, located in Menjalara square apposite Village Kepong Mall and Tesco. 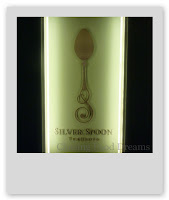 I was really looking forward to this as I have heard many others rave about his food and especially desserts. To add to it, he is running a set lunch promotion for a 3-course meal for RM21.90. The moment I step it, I could feel a serene and elegant decor and environment. It was certainly very comforting and inviting that I felt my earlier problems leaving my thoughts.


My friend and I decided to order everything different to be able to try out its choices. There were four choices of entrees. We both started with entrees of Crumbed Calamari and Stuff Mushroom. Both entrees sounded so simple and yet we just loved it! 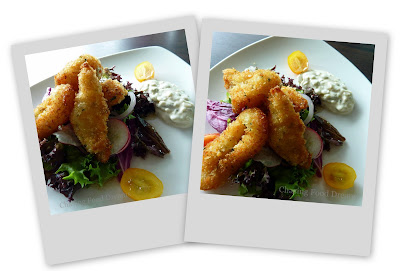 Four pieces of tender and perfectly breaded fried golden calamari pieces that is served with a mesclun salad and a homemade tartare sauce. Juicy and ever so lightly fried, the taste was light and simply irresistable. The salad provided a beautiful accompaniment to lighten up the fried calamari and its tasty tartare sauce. 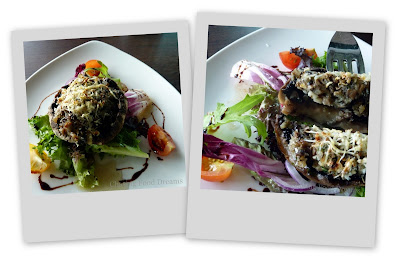 Stuff Mushroom was another simple but juicy entree, which has a Portabello mushroom stuffed and grilled. I love the fact that they served this with mesclun salad as it helps to lighten the entree again. Salad was simply dressed with oil and a balsamic vinegar reduction. Overall taste was well balanced with salty and smoky flavours of the mushroom being the star of the show.

We had a hard time on deciding the Main Course as there were so many choices. This is an added point as I believe that the chef was really thoughtful in giving varieties to its customers. There were nine choices altogether for Mains, ranging from pizzas, pasta to chicken, and seafood. My friend decided to go with the most simple and basic of pasta - Spaghetti Aglio E Olio Con Peperoncino. He deemed that the most simple dish is usually the hardest to make. I selected a Seafood Crepes as I thought it was quite unusual and this is not found on most set lunch. 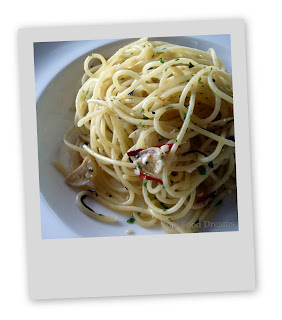 Spaghetti Aglio came first. As seen in the picture, a very basic pasta lightly doused in olive oil, garlic, parsley and chilli. A bit bland and we both thought it could be a bit more tastier but I like the fact that the pasta was really Al Dente. 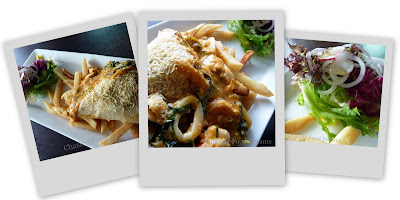 The Seafood Crepes came and I just love the presentation! There was a big toasty crepe where you can see the sprinkle of cheese on it, laying on a bed of fries and served with a side of mesclun salad again. When I cut up the crepe, I could immediately smell a creamy seafood scent lingering. The crepe was stuffed with pieces of prawn, calamari and fish soaked in a pinkish Mornay sauce. It was creamy, soft and the seafood was fresh, hence it enhanced the overall taste of the dish. I am not too sure about the fries with the crepe but fries are my weakness, hence I still enjoyed it anyway. :P

I have saved the best for last. No wonder people raved about his desserts! I am a truly convinced fan of Chef Ken's desserts! There were four choices and we selected Chocolate Mouse and Panna Cotta. 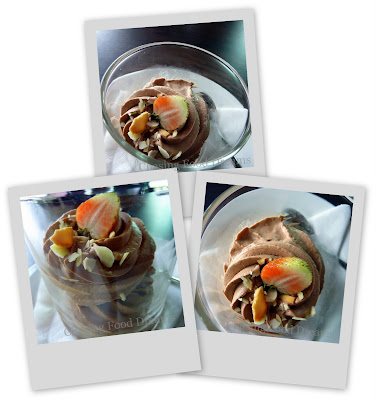 I have had chocolate mousse before and did not think much of it. However, this one blew me away. Looks are so deceiving. When I took a first bite of the mousse, all I could think of was that this is the BEST mousse that I have ever had. It was chocolatey, smooth, creamy but not over, and laced with a sufficient amount of Rum, sigh... this was sheer pleasure. I wanted to keep the whole dessert for myself. 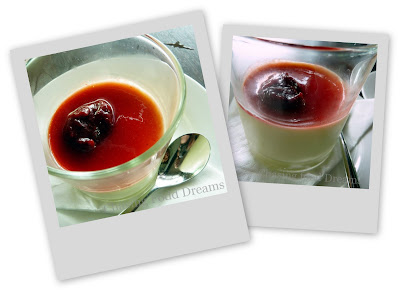 Panna Cotta was another dessert that I have brushed off as it was just baked cream. The ones I had before was simply cream with gelatin. This one was really an eye opener as I felt that this is what Panna Cotta should be. This one will set the standard for my future Panna Cottas! Ultra smooth and one can really taste the beautiful baked cream without the gelatin texture. It was topped with a strawberry coulis. Simply divine!

I have also had the Tiramisu at this place earlier and it is one of the best sellers here. This trattoria also serves homemade gelato ice cream which you can actually taste the flavours strongly and not all just cream. Silver Spoon is gonna be my benchmark for desserts from now on...

After desserts, I actuallly felt I could survive this "wrong" day! Our meal came up to a totaled of RM 48.20. I am definately going back as I was checking out the full menu and desserts are gonna be top of my list. Good food and value for money.