Shrimp, Prawn.. whatever its called, these luscious crustaceans have certainly found its way here. I was hanging around The Curve when it dawned on me that there is this seafood place that has probably been blogged to death which I haven't tried.

Prepared for my serious seafood quota of the month, I spear headed there with utter delight like a child who has just found some obscene amount of candies.
﻿﻿﻿ 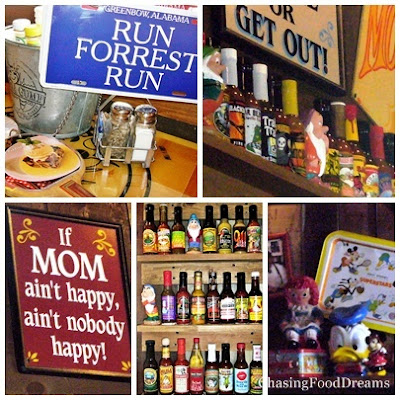 Currently, BGSC has two branches with one in The Curve and the second one in Sunway Pyramid. The company originated from California and features S.H.R.I.M.P in almost every possible way as its main ingredient with the influence of Southern Cajun fair. There are plenty of seafood as well and specialties like BBQ ribs, meat (halal), burgers, etc. 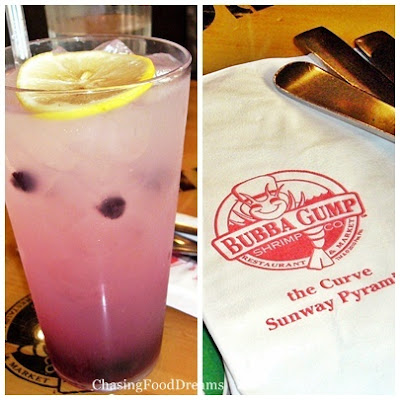 Let's dive right in to its menu. As there was only two of us, we decided to order its Run Across America Sampler and Bourbon Street Catch of the Day, which was Tilapia. I also ordered a Speckled Blueberry Lemonnade.

First up, Run Across America Sampler is basically a bit of all their specialty appetizers. 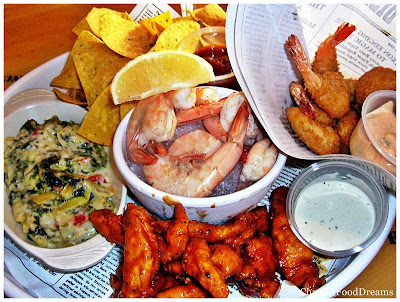 Oh gosh, the portion is huge! Certainly enough to be shared by at least 4 foodies and well worth its price. There was Bubba's Far Out Dip & Chips, Chilled Shrimp with Cocktail sauce, Spicy Chicken Strips, Hush Pups, and Mama Blue's Fried Shrimp. 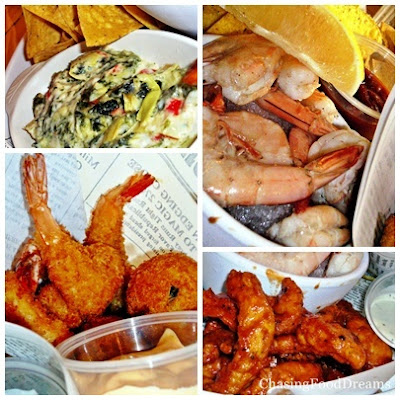 Bubba's Far Out Dip & Chips is their signature dip made with spinach, artichokes, red bell peppers and creamy Monterey Jack cheese served with an mammoth amount of crispy tortilla chips. Creamy, tasty and heavenly, the dip was really tasty and the vegetables added the texture to it. Thumbs up for this one!

Chilled Shrimp with cocktail sauce was nothing to shout about as it was simply some shrimp basking on a small mountain of crushed ice, a wedge of lemon and a really good cocktail sauce. I have to say that the shrimp was so so as it was not as fresh as expected.

Spicy Chicken Strips was deep fried chicken strips coated in a tangy sauce, somewhat similar to buffalo wings sauce, and served with a ranch dressing (or was it blue cheese?)

Mama Blue's Fried Shrimp was crispy and quite good when dipped in the Remoulade sauce.

Hush Pups is what I like. Its is a southern dish of blended shrimp, fish and corn kernels, deep fried to crisp and served piping hot with the Remoulade dipping sauce. Reminds me of our local cucur udang done southern style.

Next up was the Bourbon Street Tilapia. 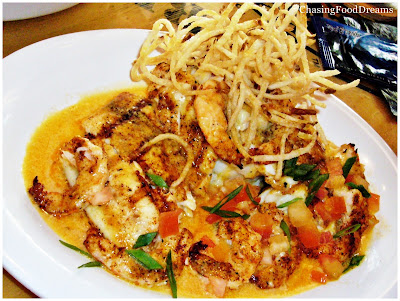 When I found out that the catch of the day was tilapia, my first thought was this dish was expensive and tilapia was a very common fish. I was wrong. The portion was big and loaded with a lot of shrimps. Charbroiled, the two huge pieces of tilapia coated with Cajun spice was really good! Firm and sweet, the fish was fresh and I love the rich creamy sauce with bits of tomatoes. Shrimp was more of a supporting star but I love the mash potatoes and its adornment of crispy fried potato sticks. I would order this again.

By then, we were so stuffed, we had to forgo desserts. :(

I was so looking forward to its chocolate cake in a jar (That Chocolate Thing) but I guess this gives me a reason to come back! I think I ll start my meal with dessert first next time...  ;)

In short, good food and ambience for big groups. Might be $$$ but portions are huge and well worth the price. I will have to say I was thirsty after the meal though.

As what Forrest already attested with his famous quote: " My Mama always said 'Life is just like a Box of Chocolates, you never know what 're gonna get!' ", BGSC certainly live up to its tagline!