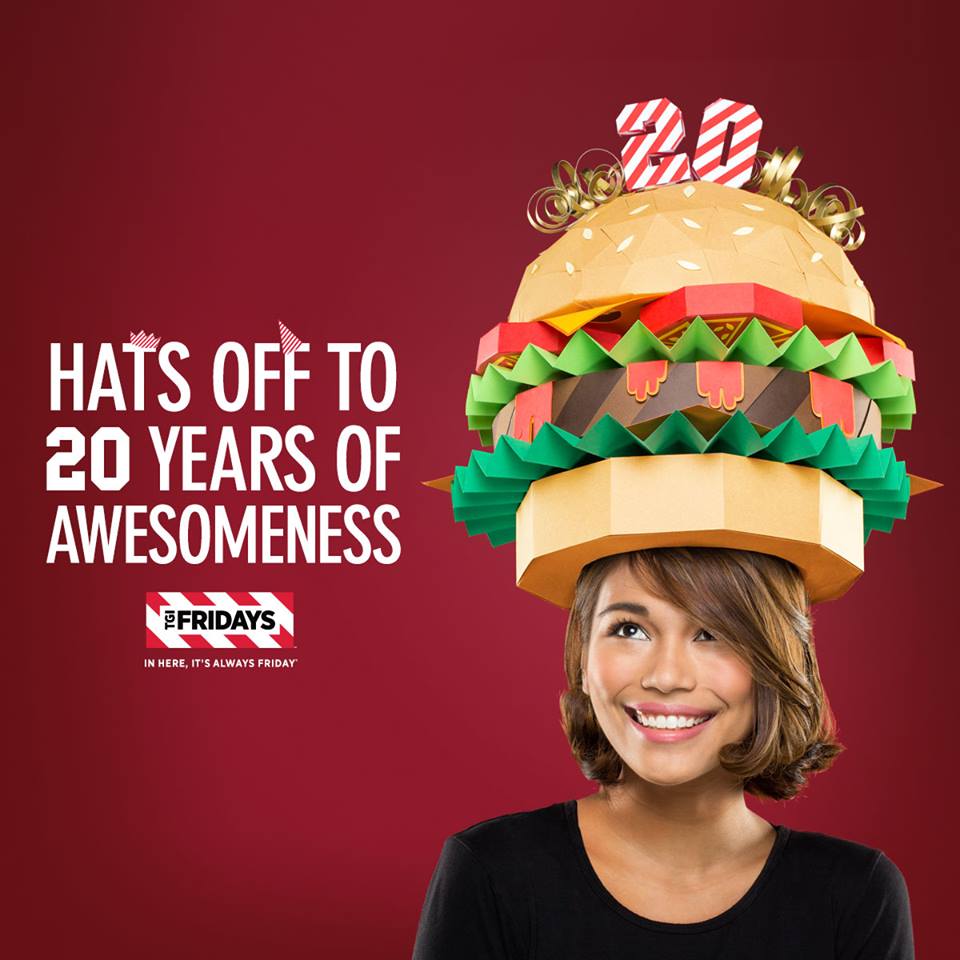 Hats Off to 20 Years of Awesomeness! 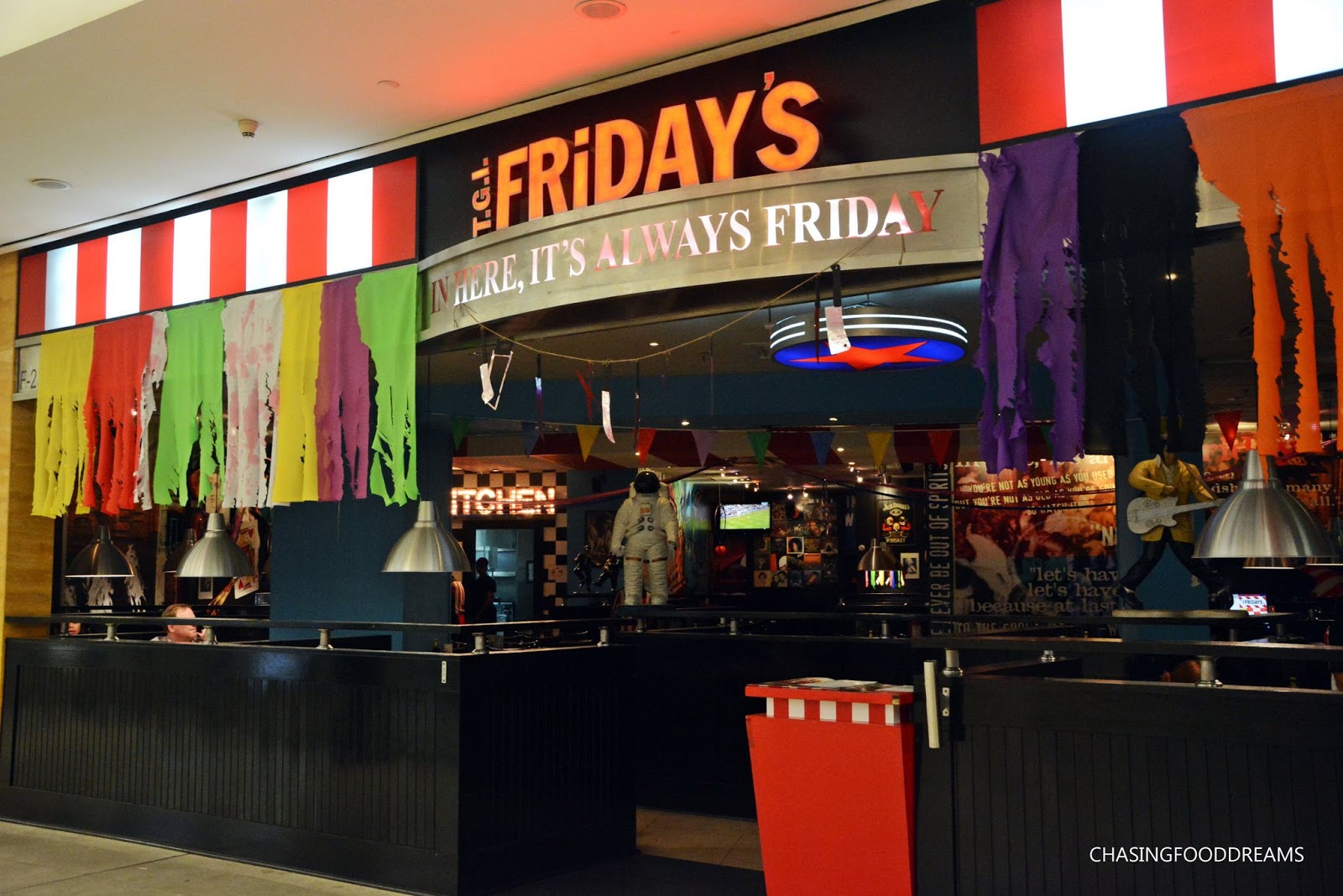 It’s been a fun and delicious 20 years in Malaysia for TGI Friday’s and they are celebrating this 20th Birthday with a big bang. TGI Friday’s is saying to everyone, put on your party hats and head over to any TGI Friday’s for some deliciousness. From 27 October to 13 November, 2014, TGI Friday’s is giving out a RM20 Voucher when diners get creative and design their own party hats to redeem it.

It’s that simple, dine at any TGI Friday’s, render your artistic creations on the given party hats placemat given by the restaurant, snap a selfie with the hat, load it up on Instagram with #fridays20th and show TGI Friday’s to get an instant RM20 voucher. We jumped on this anniversary bandwagon recently and had loads of fun dining and unleashing our artistic rendition on our party hats.

First up, we fill up our tummies… 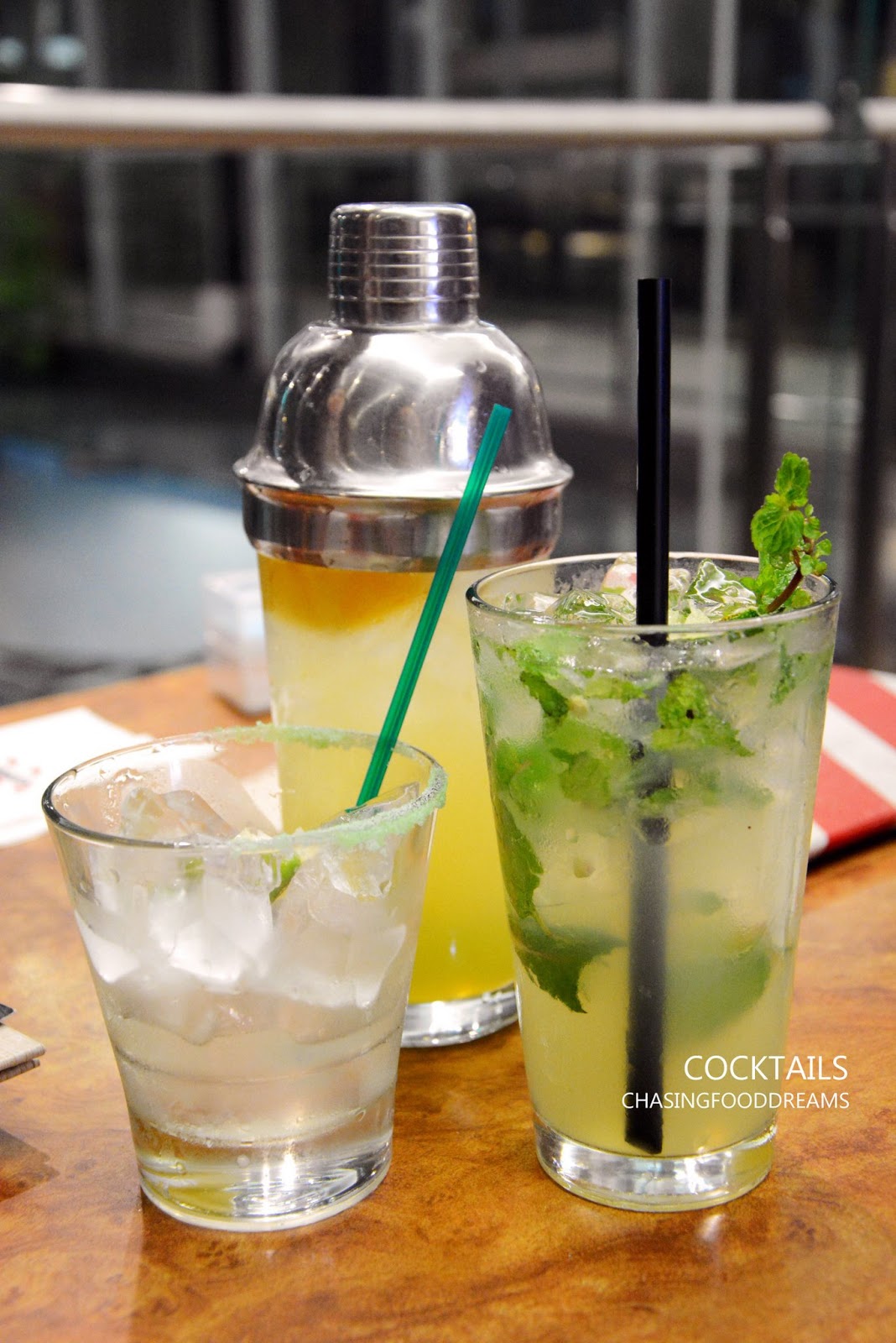 At Friday’s, one should always start with all their tall and refreshing Mocktails and Cocktails. These icy treats are a great way to quench any thirst, especially after a long day at work. Our foodies had the Pineapple Sunshine, Orange Blast Slush, Mojito and Margarita Shaker. I settled for their Bottomless Ice Lemon Tea since I do have a bottomless urge for drinks. 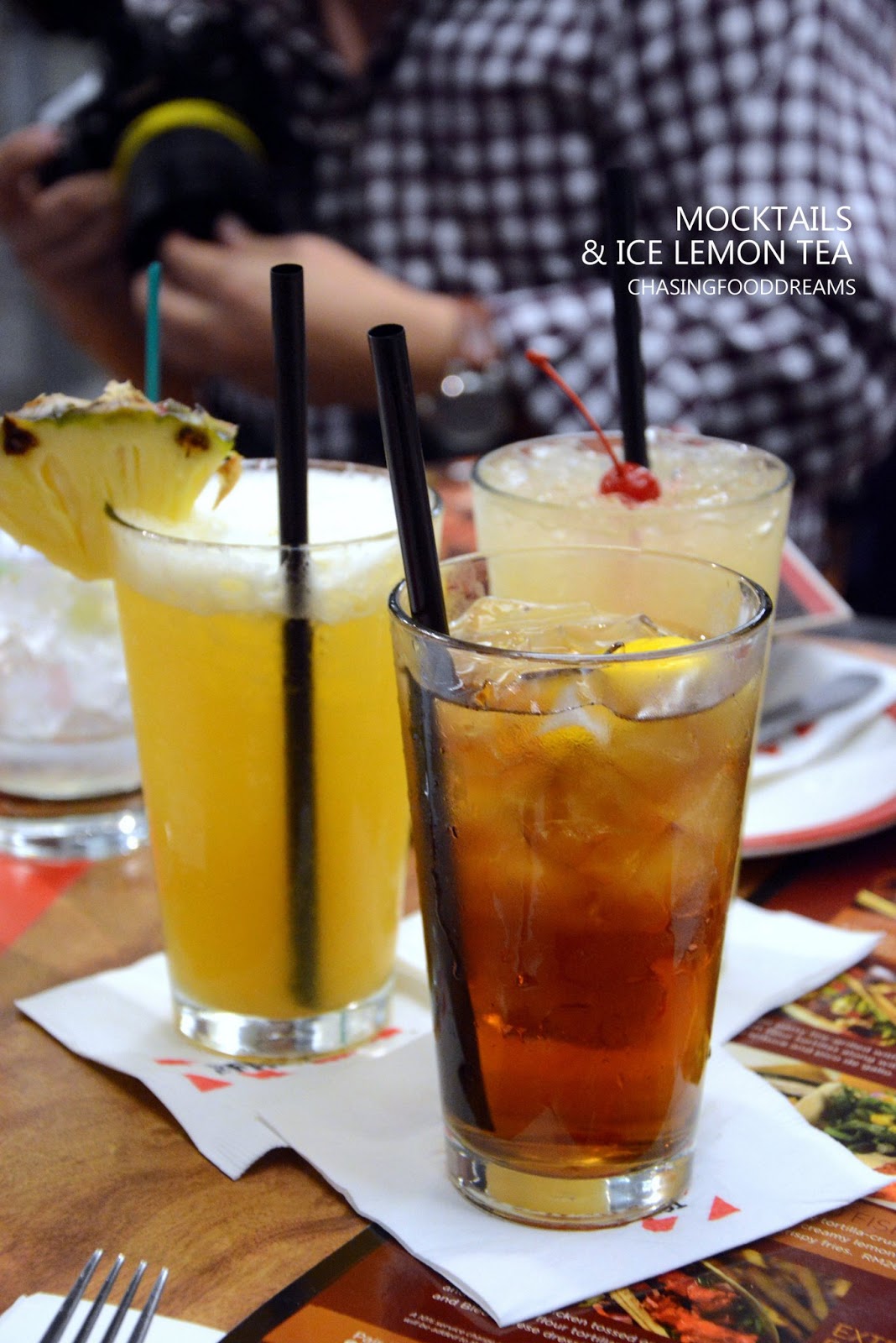 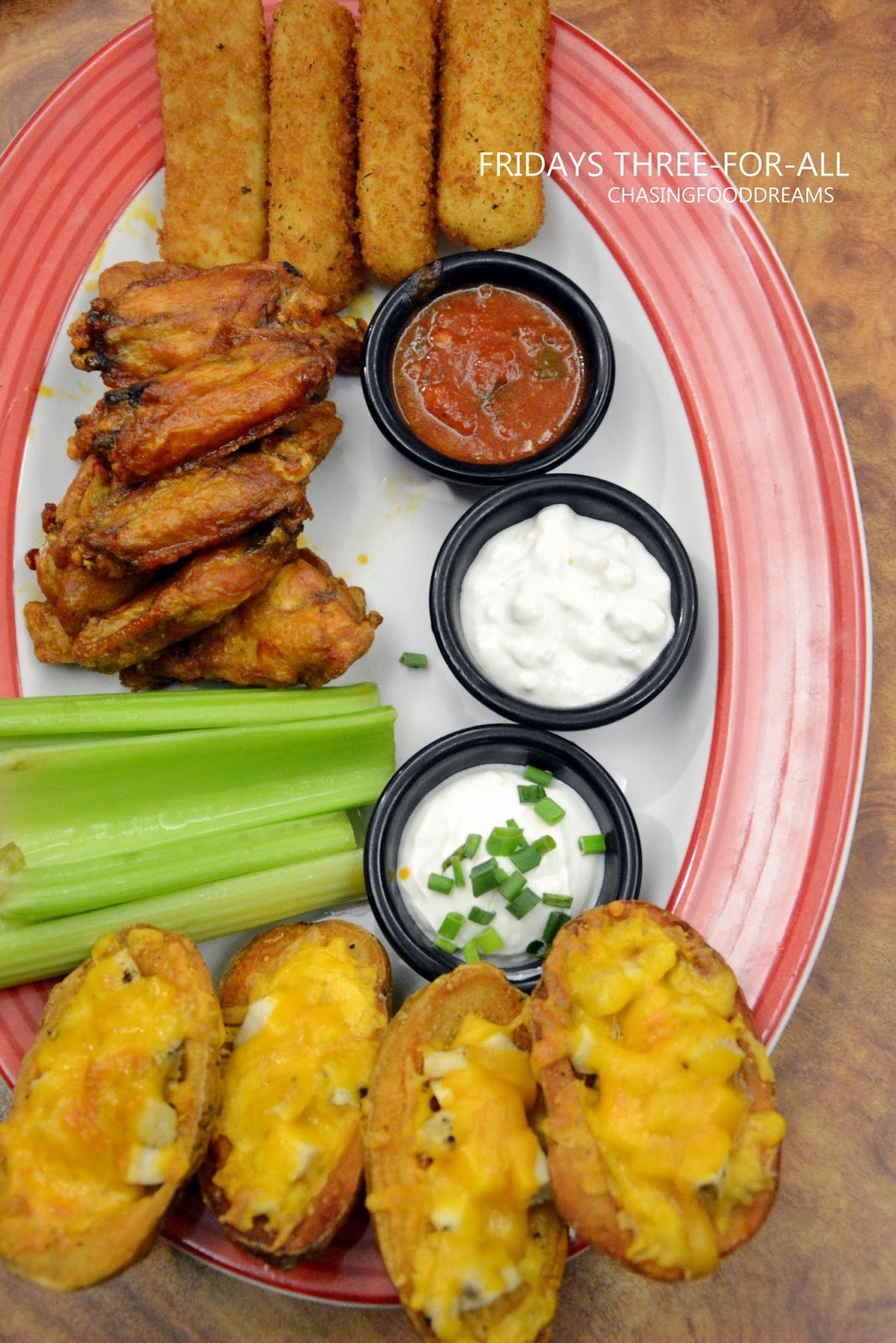 I have always love Fridays Three-For-All. It’s definitely a great choice when one cannot decide which appetizers to order and so this platter satisfies everyone with three of their best sellers of appetizers. From Fried Mozzarella to Loaded Potato Skins and spicy Buffalo Wings that comes with three sauces, it’s a fiesta of flavours that most do not want to miss. 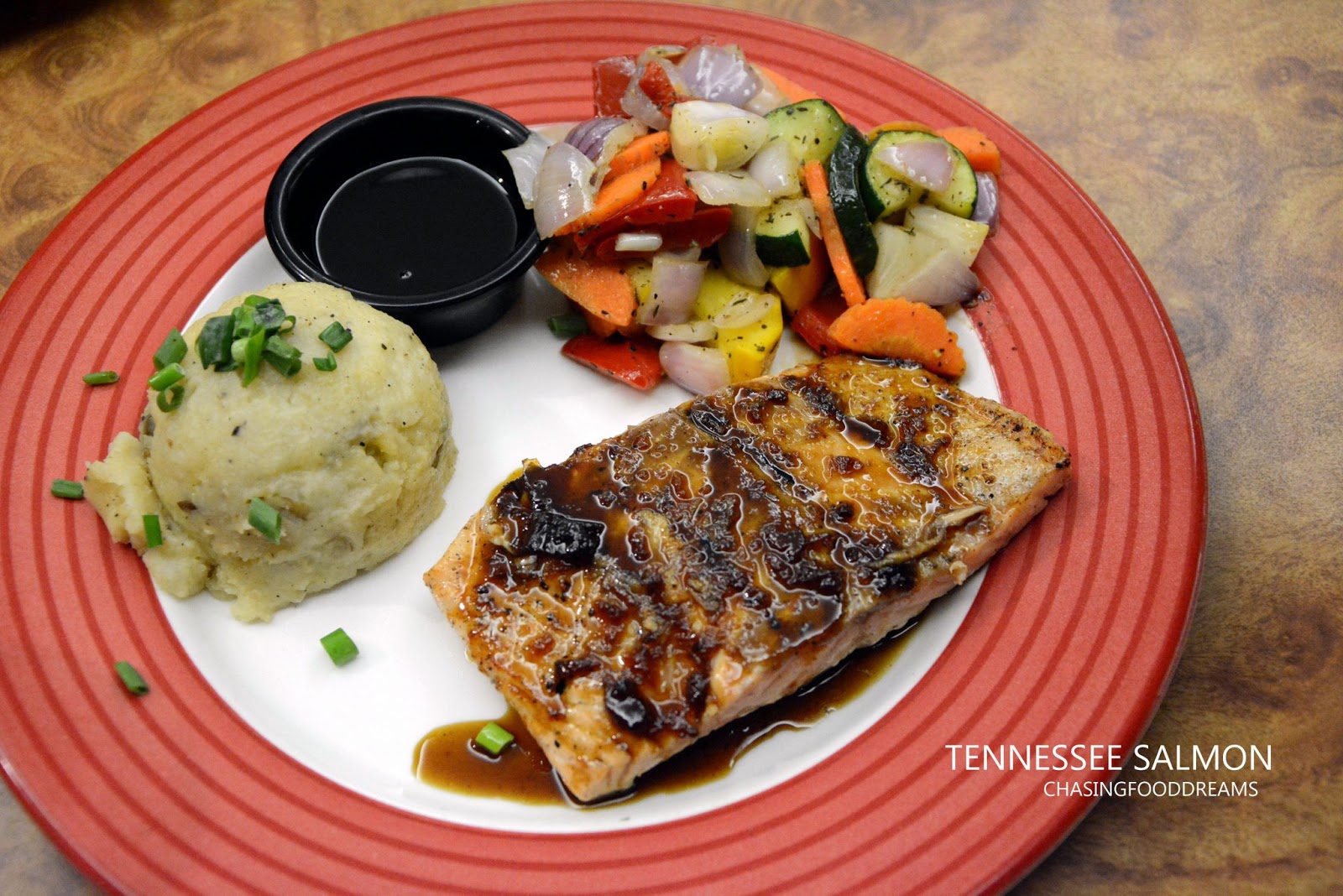 If there is a favorite at TGI Friday’s for me, it would have to be the Tennessee Salmon. Well in fact, I love all the choices of dishes under TGI Friday’s signature Tennessee Grill. It’s the sauce that takes all the meat and seafood to extra scrumptiousness. My Tennessee Salmon was cooked to my liking, medium pink and served with Cheddar cheese mashed potatoes and seasonal vegetables. The North Atlantic salmon is beautifully moist and creamy while the Tennessee sauce is divine and sweet. It’s a dish that I have ordered many times and have always enjoyed it dearly. I shared this with my little one who also enjoyed it very much. 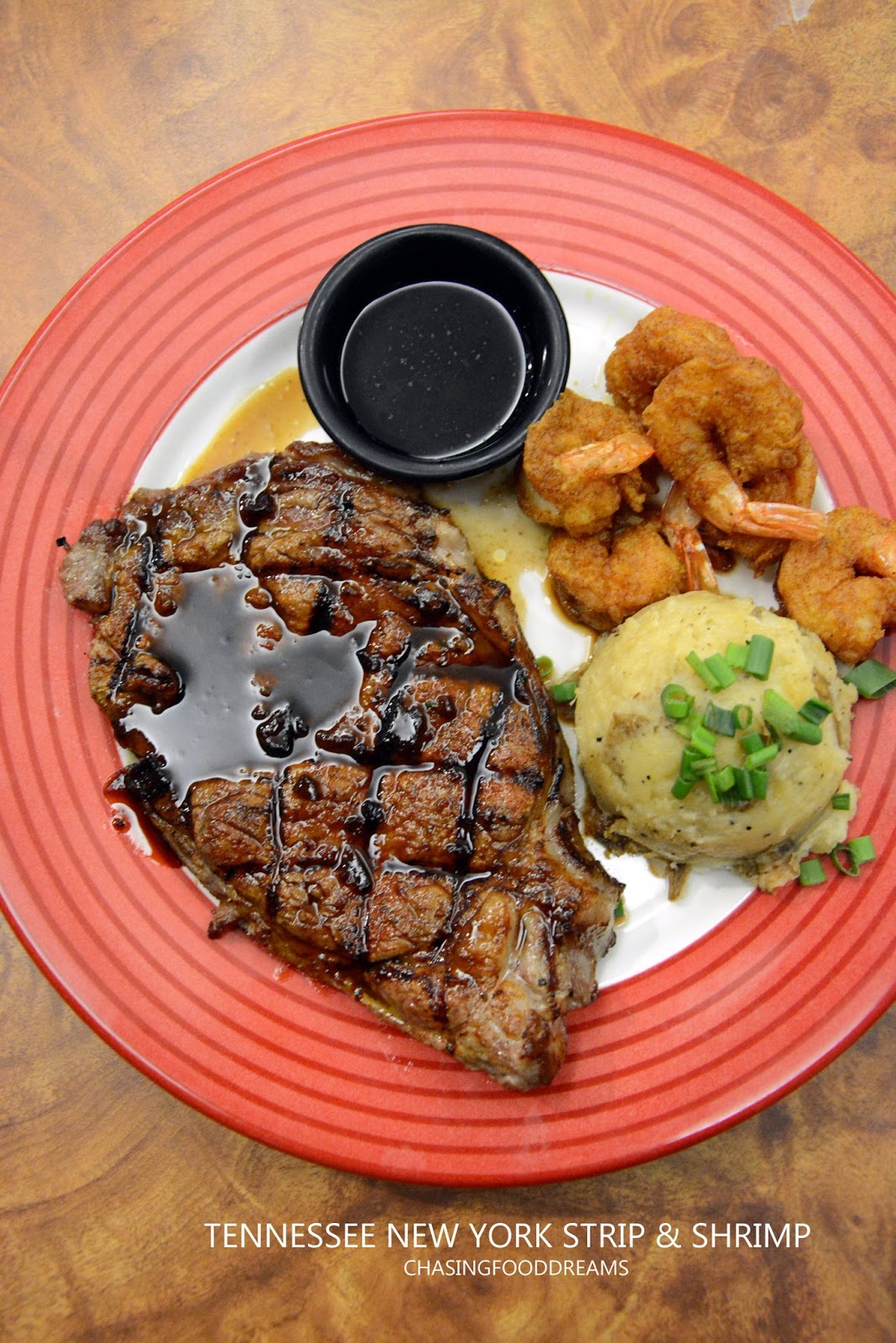 Dining with foodies is always awesome as I get to also pick from their plates. Xiang had the Tennessee New York Strip and Shrimp. A juicy 10oz Australian strip steak laced with the same divine Tennessee sauce is a beautiful partnership with crispy bread fried shrimps. I stole a taste and enjoyed the flavourful steak! 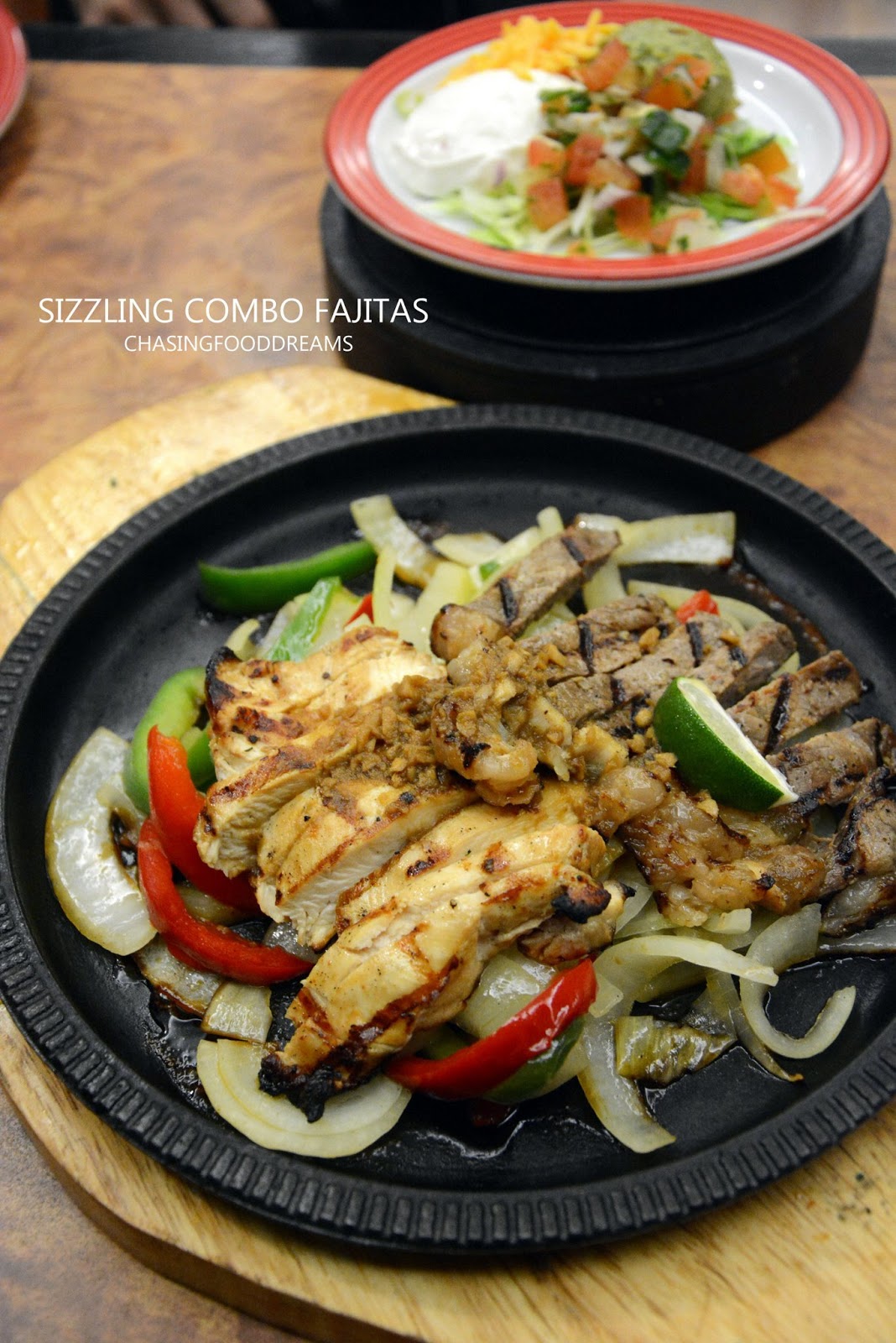 Kifli had another popular dish of Sizzling Combo Fajitas which comes with a sizzling sensation. The beef and chicken fajitas are served with grilled onions and peppers, warm flour tortillas, pico de gallo, guacamole, sour cream and cheese. 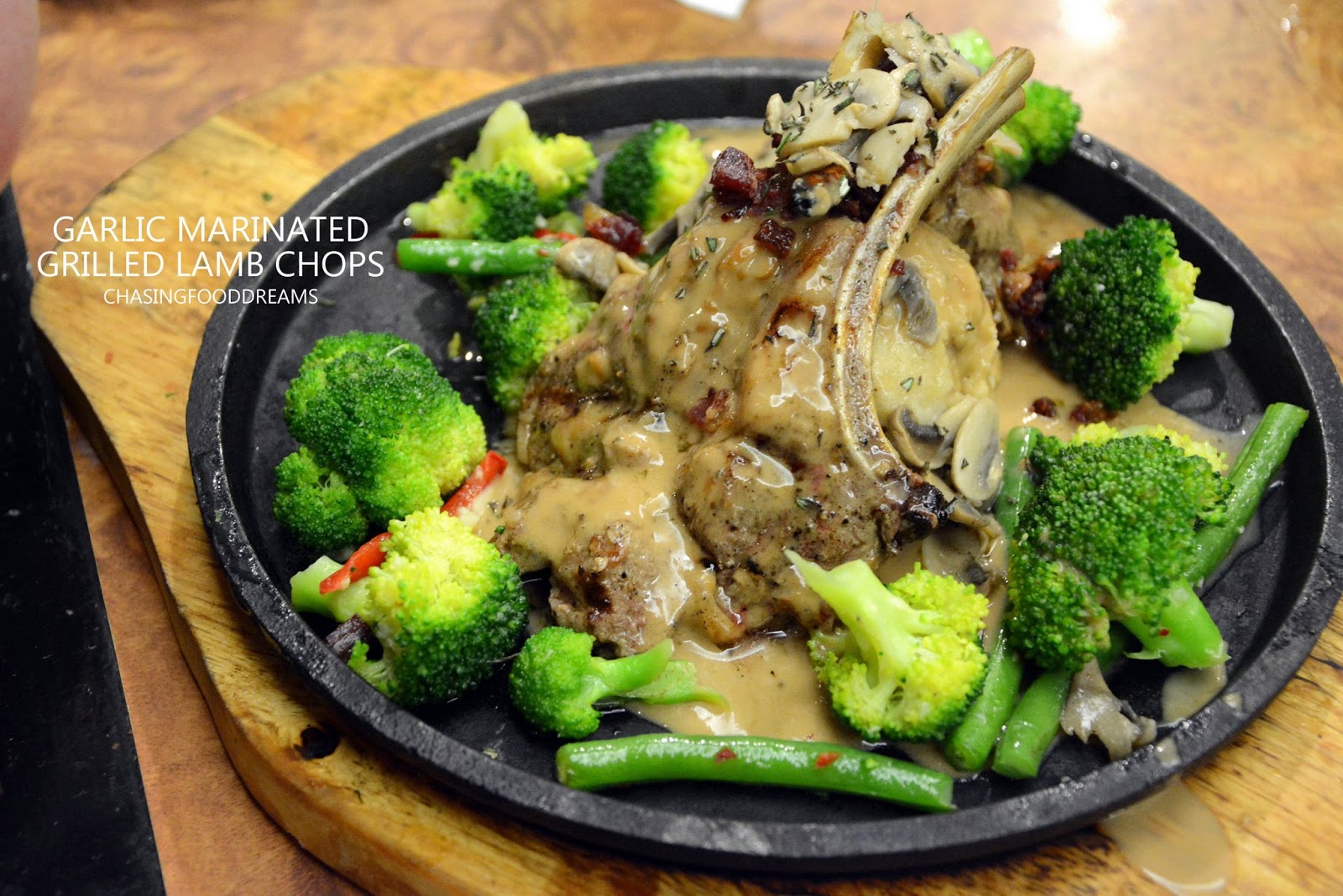 Choi Yen took on the bold Garlic Marinated Lamb Chops served on a hot skillet. The lamb chops were nicely seared and glazed with the garlicky demi glaze sauce. The lamb was tender and also juicy and went well with the Cheddar cheese mashed potatoes and seasonal vegetables. 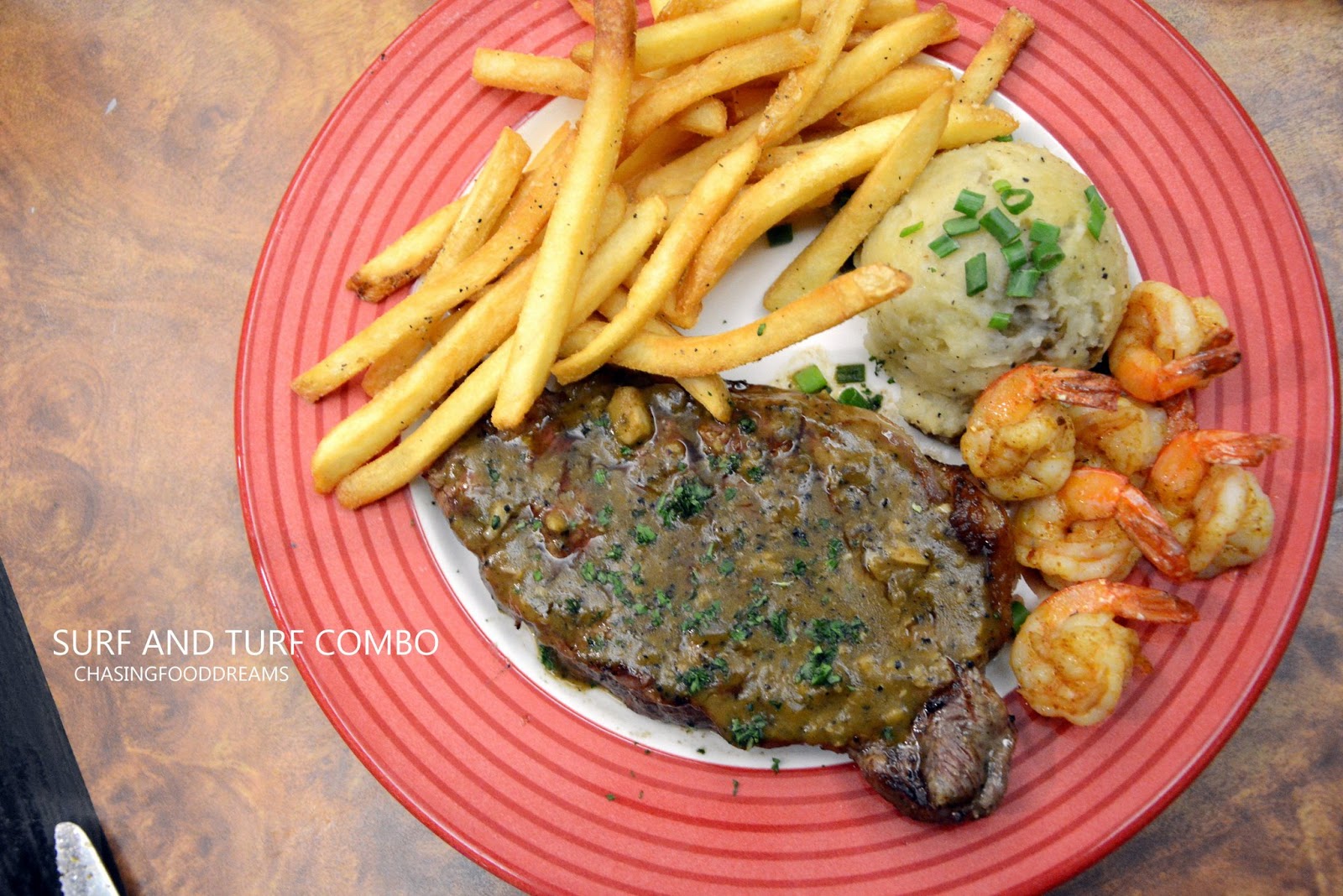 The Surf and Turf Combo was Sidney’s choice and it had a luscious 10oz New York Strip grilled to medium with Blackened Cajun Shrimps and sides. 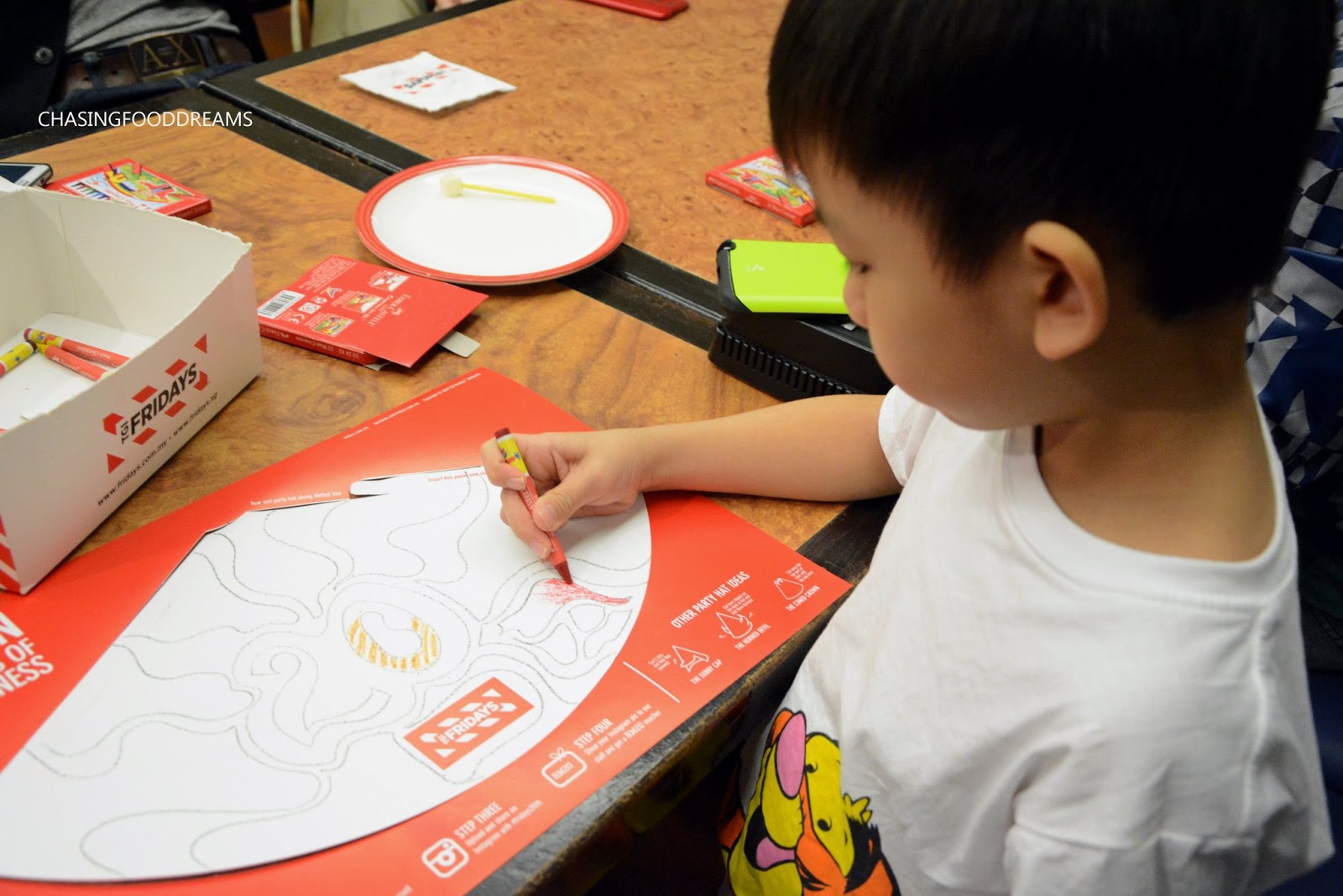 After that delicious meal, we were given this party hat place mat and drawing materials. Putting on our artistic thinking hats, we unleash our creativity juices by tearing out the party hat and express our designs on the hat. 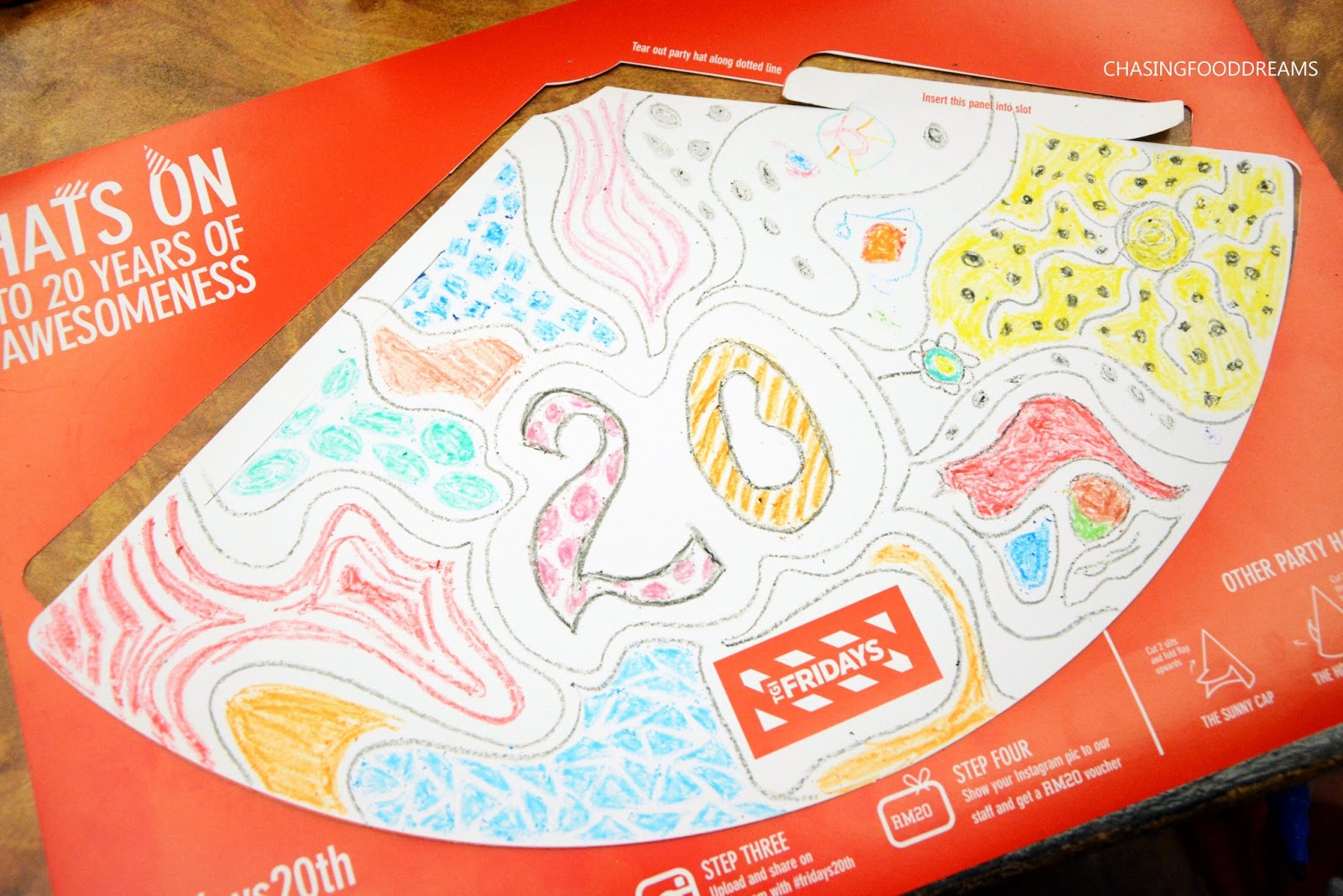 After decorating it, simply set the party hat in place, and take a selfie of yourself with your party hat. My little one and I had a fun time decorating! 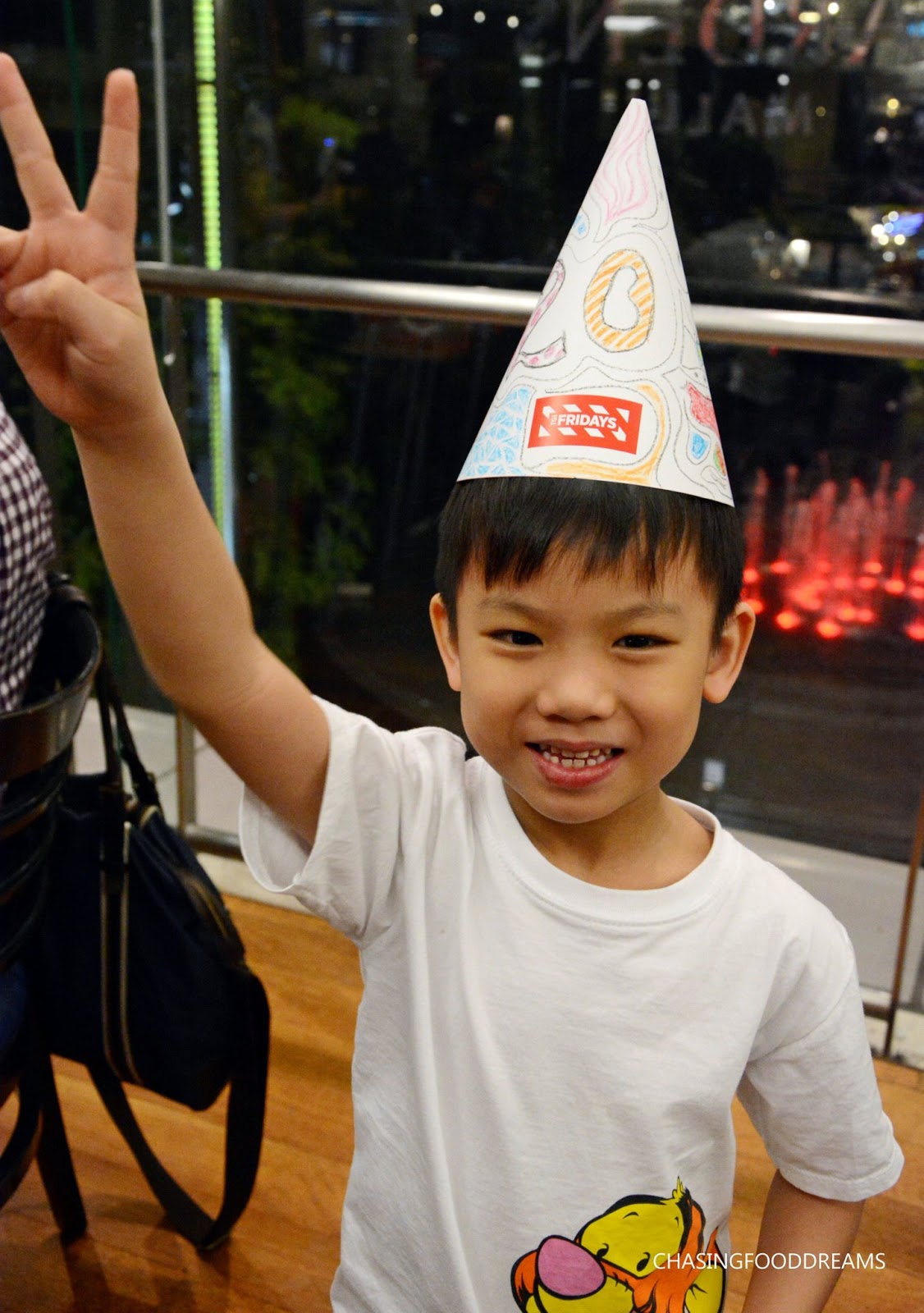 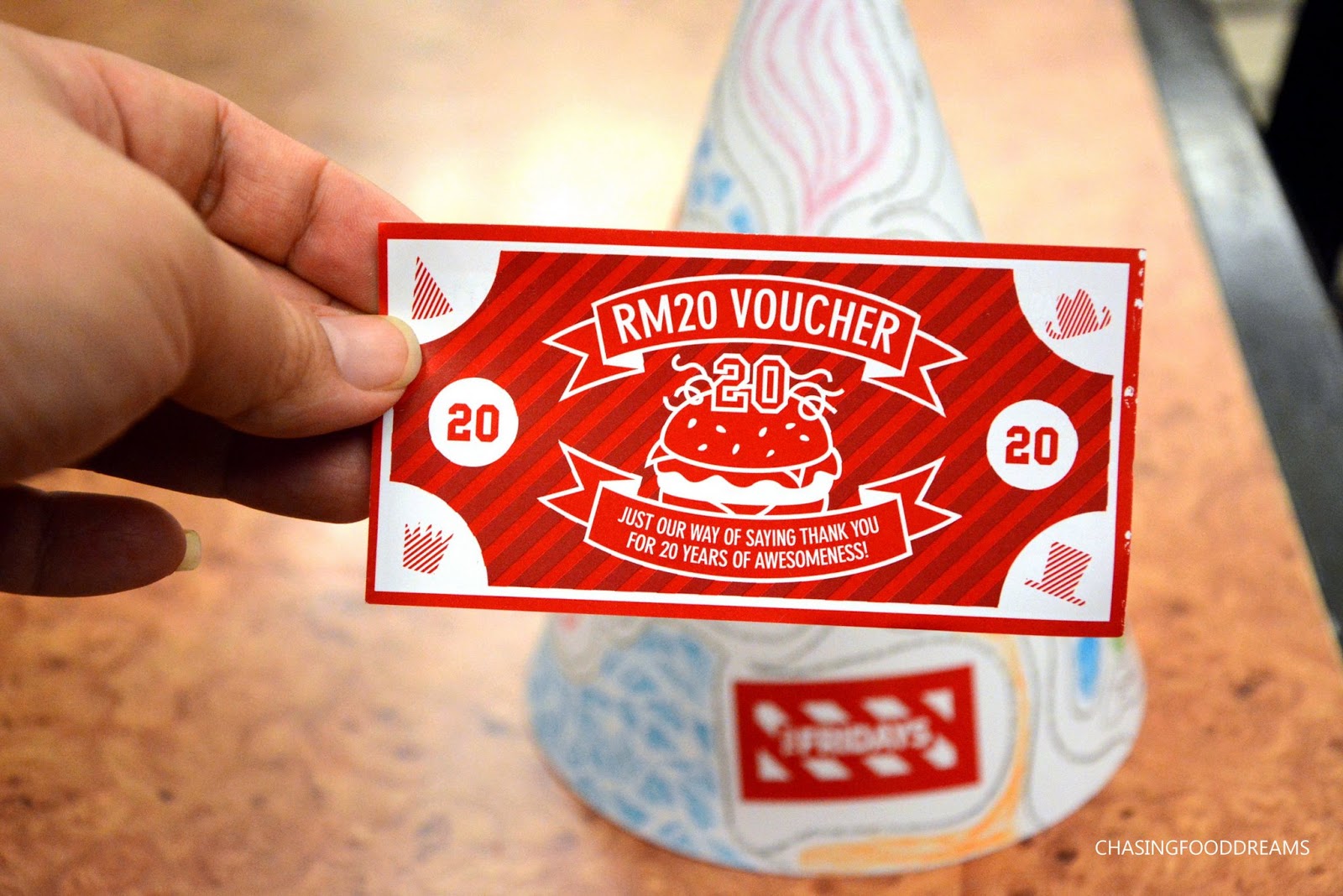 Finally, show your Instagram photo to TGI Friday’s staff to redeem a RM20 voucher. If you dine in a party of four, you can redeem up to four vouchers with four individual Instagram photos! So bring in the crowd and get your RM20 vouchers. T&Cs applies here.

Another plus point for TGI Friday’s is that it’s a great kids friendly restaurant to bring your little ones.