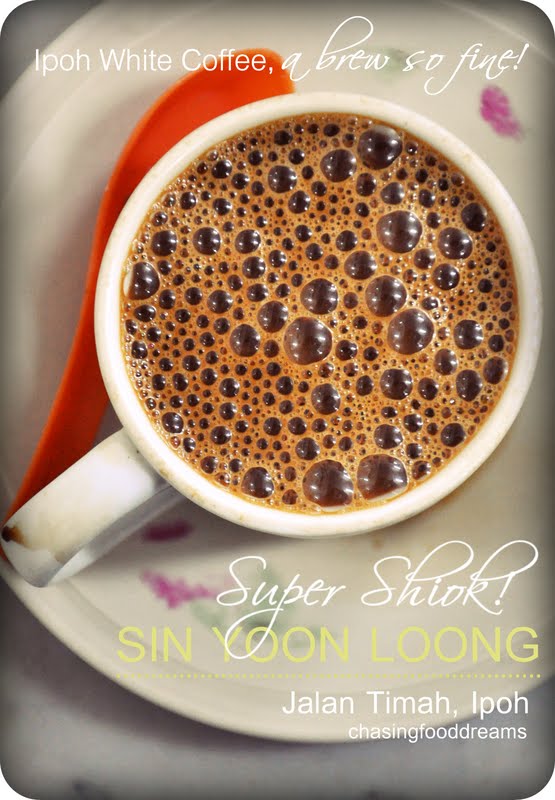 It’s My Epitome of White Coffee! 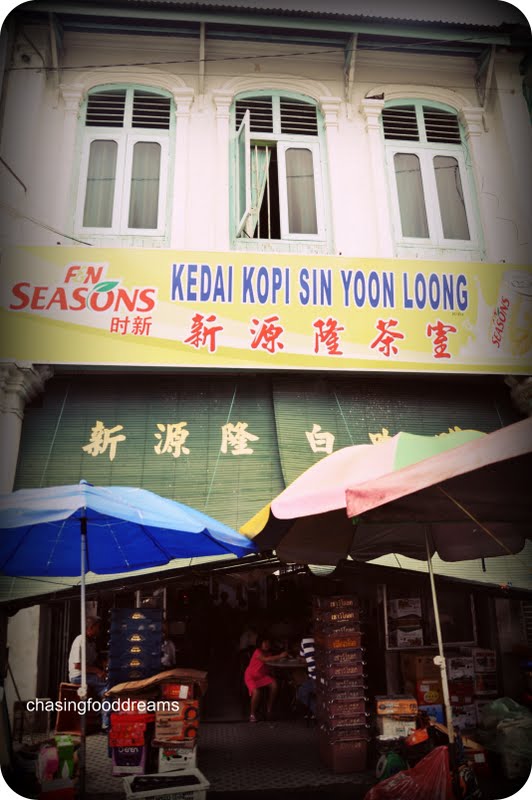 Well I must say that this cup of Joe has been long brewed and consumed by many who visit Ipoh! It all started from an immigrant from China whose Hainanese spirit led him to Ipoh in the early years in search of a better living. Mr. Wong Poh Chew is his name and Sin Yoon Loong is his fame. He opened Kedai Kopi Sin Yoon Loong with his brother Mr. Wong Poh Ting in 1937 in the city of Ipoh, Perak.  After much tedious effort, the brothers perfected their recipe for a perfect cup of Joe, in this case Ipoh White Coffee. This label of Ipoh White Coffee took Ipoh by storm and is being used iconic ally today everywhere in Malaysia. To read more about Ipoh White Coffee, check out here.

Ok, I was late. Late to savor this brew but then again, better late than never.

Though it’s been blogged to death by many, I still wanted to contribute my little six pence worth of thoughts to this holy grail of Ipoh White Coffee. I made a detour into Ipoh recently after several visits to the north and have been trying to get a taste of this much worshipped coffee. Finally luck on my side after my third attempt. 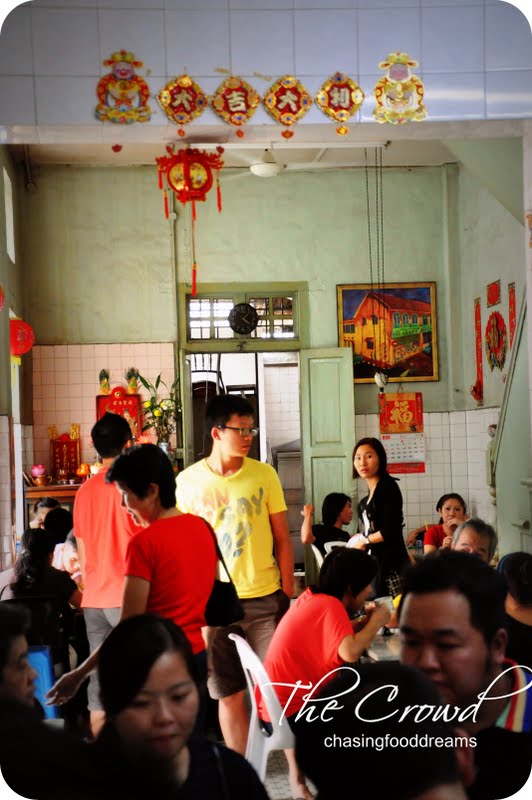 What you see is what you get at Sin Yoon Loong!

Thoroughly almost ancient, ambience replicate the traditional good old kopitiams. It’s fairly bare on the walls with only few old memorabilia. The walls are also tiled half way and painted half. The kopitiam stretches a good long one all the way to the back of the shop. Odd mixtures of tables and chairs are quite tightly placed all over. 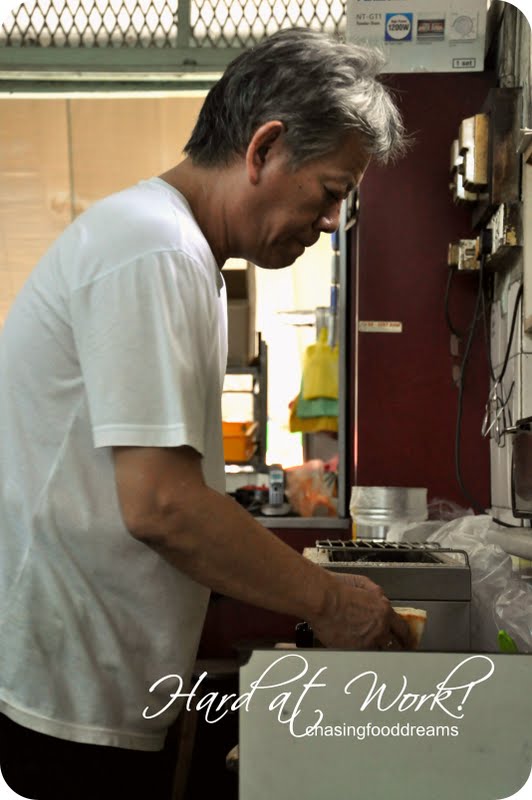 At the side of the restaurant lies the booth to make the beverages while another side has a tightly squeezed bar to make toast and display some homemade desserts and pastries. A small front counter allows customer to make payment before leaving.

It was a mumble rumble moment from the time one steps in as the environment is loud and packed to the max. From customers trying to locate a seat to orders being frantically placed and the rush of adrenalin to cater to all the orders, it’s a wonder this place survives the stress levels. This place is also not really a place to take leisure time to sip the brew on holidays as there would certainly be a few customers hovering over you to finish your coffee so they can have your seat. We were there after lunch at 2.30pm and the crowd was just as hectic as before lunch! (We peaked in before our lunch) 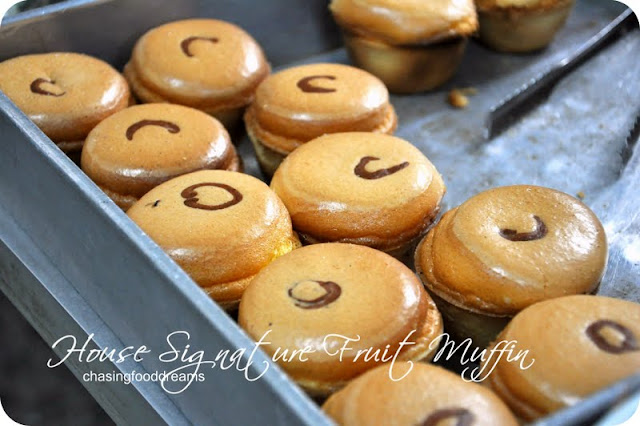 Little D must have his usual of soft boiled egg and toast with butter and kaya, so he was looking forward to this when I told him earlier. I overheard the owner (I assumed!) shouting out to his staff, no more bread, no more bread, my heart sank because I know little D was so looking forward to this. Luckily, I managed to grab a table next to the corner where the owner was making toast. I smiled and asked him if he even has any one piece to spare for a little one. He didn’t reply but I know he heard me as we did have a moment of eye contact.

Oh well, I just told myself I would wait since the poor guy is already looking so stress. Then another staff came and took our orders. We were also told that the soft boiled egg might also be not available as business was super brisk that day. Ok, we thought to ourselves, just our luck. Nevertheless, I was super thirsty even having just had lunch. Our orders of one hot Ipoh White and one Iced Ipoh White were quickly logged in. 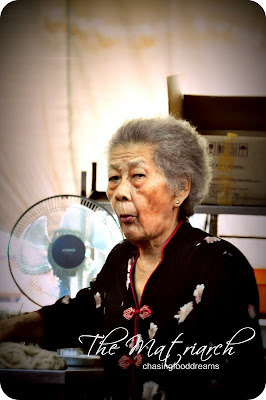 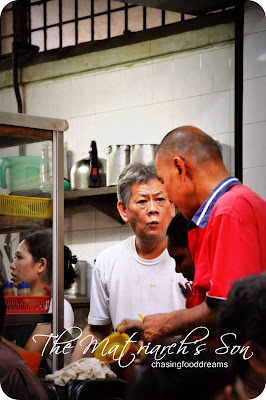 As I waited patiently while taking in the scurrying staffs and customers, I caught the owner in action with an expression similar to an old lady sitting at the payment counter. If I am not mistaken, it must be the mother & son judging by their similarity! 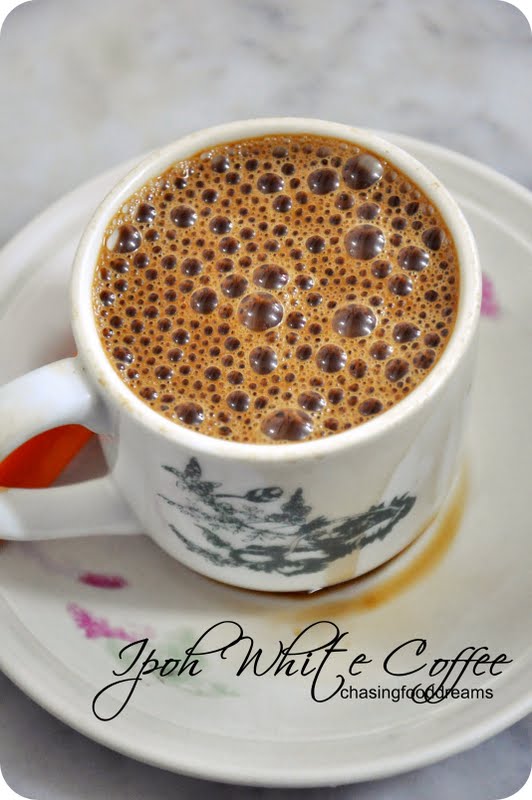 Our coffees arrived. Never a coffee aficionado but rather a tea lover, coffee never impressed me. I love the aroma more than the taste itself. The hot Ipoh White Coffee (RM1.40) was frothy with bubbles. A good color of richness in the cup while the froth denoted a nice pulled to temper the temperature and texture. It’s all about the roasting process of the coffee to bring out the flavor and color. After the coffee is ready for consumption, then it’s also about the balance of the amount of coffee used, sugar and milk. 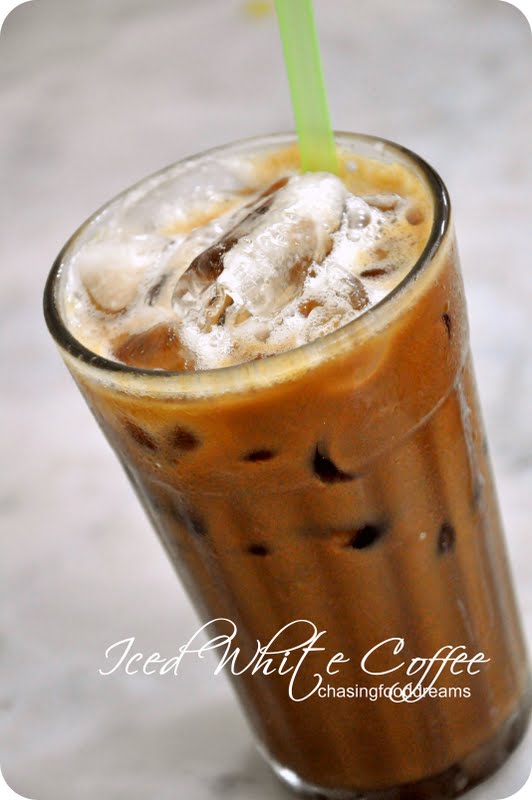 My Iced Ipoh White Coffee (RM1.60) also shared the same color of the hot one but without the froth. I was bowled over one sip of this coffee. The smoothness of the coffee was really delicious while the flavor had a good balance of coffee against milk. It was silky and creamy with a dose of caffeine enough to jolt my senses. Just sweet enough to tantalized my senses and sent sweet bitterness to all the neurons I possessed!

I gulped this down in less than a minute and reordered one more right away… pure satisfaction guaranteed!!

My partner also agreed that this cup of Joe certainly has an amazing balance of flavor. Not over thick and definitely not thin in consistency, I can finally understand why coffee connoisseurs from all over go gaga over this! I succumbed to its addiction too… 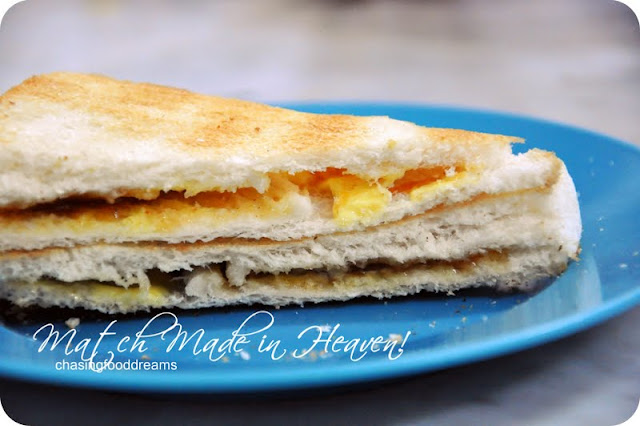 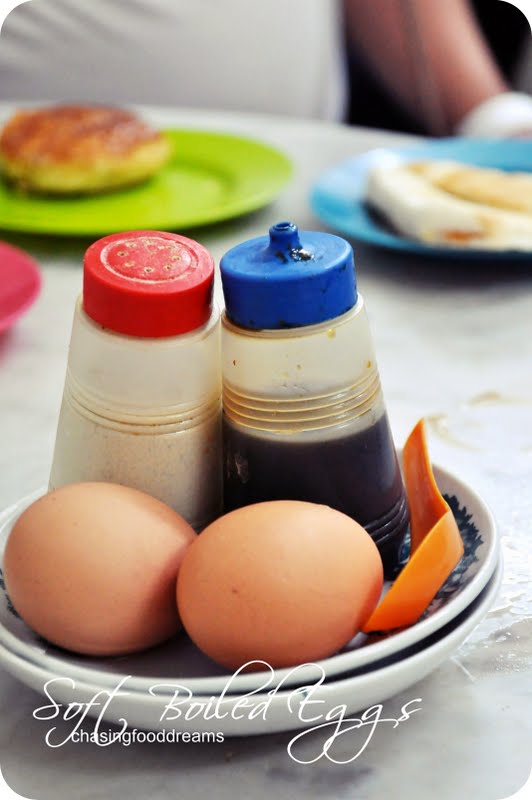 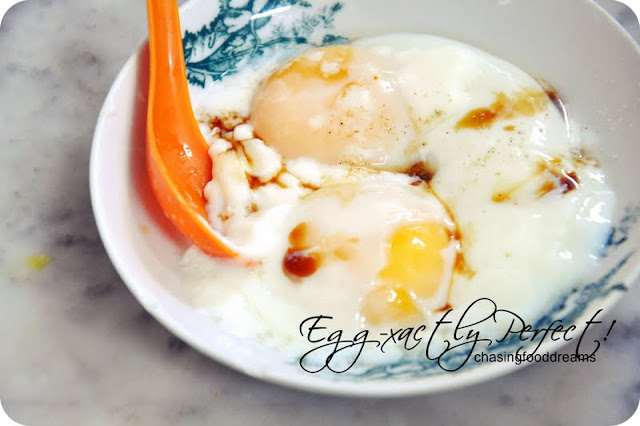 Then a surprised came. My little one got his wish for a piece of crisp Hainan Bread slathered with butter, kaya and toasted. This was followed by the appearance of two Soft Boiled Eggs. Ah…. He was mighty pleased and I was very thankful. I did give a nod of thanks to the owner… blessed his heart on how he found the very last piece of bread for D!

The toast was decent but nothing extraordinary. The soft boiled eggs were perfectly done with opaque white with a barely cooked yolk. A dash of soy sauce and white pepper completed the eggs but the combination was scrumptious. Simple but thoroughly satisfying in every possible way… according to little one, super thumbs up! 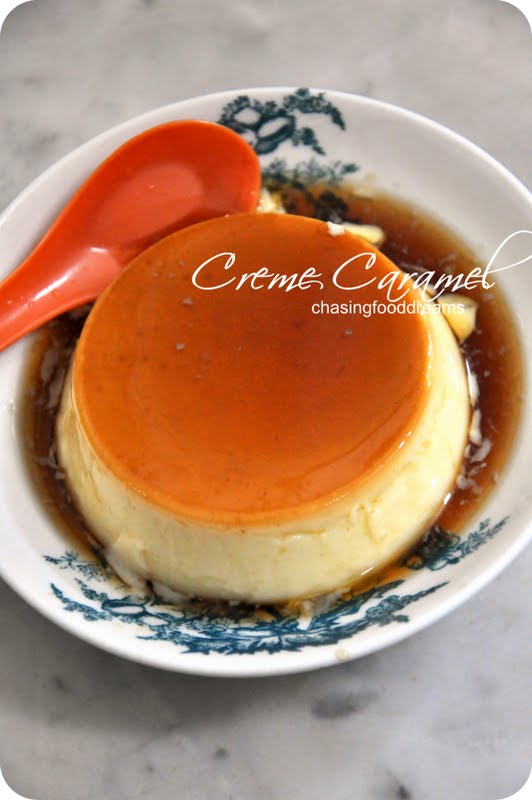 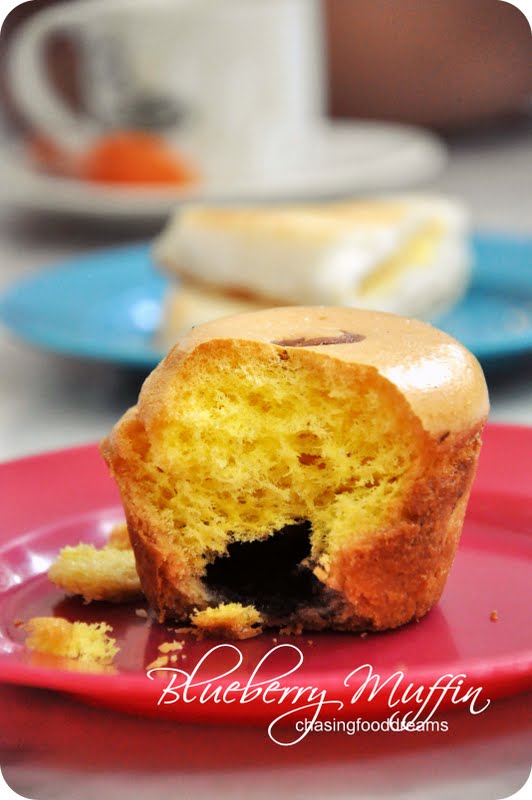 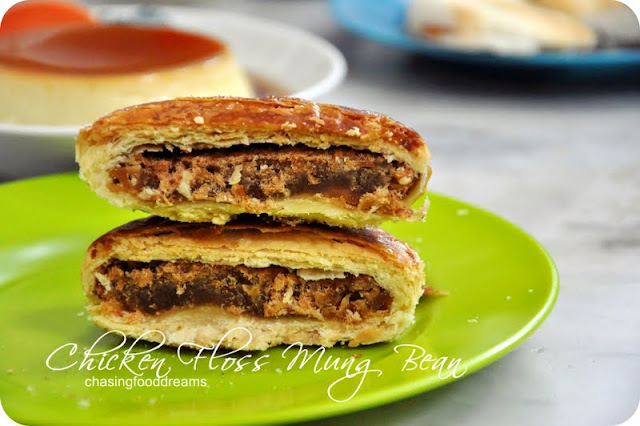 Feeling the sweet monster in me begging for a sweet moment, I caved in and ordered Cream Caramel while other half ordered their house made Blueberry Muffin and Chicken Floss Mung Bean Biscuit. I forgot the prices since there was no paper bill.

Cream Caramel proved that even the simplest item can taste heavenly when well made. This version was exquisitely creamy and ultra-smooth in texture. Heavy on milk flavors rather than egg, the cooked cream is also drenched in caramel. It’s a nice level of sweetness if you asked me. The Blueberry Muffin tasted nothing like the norm. It is more of a tart filled with blueberry (or orange or lemon) jam and covered in a fluffy light sponge. This is unique but a bit too sweet for me. Other half said the Chicken Floss Mung Bean Biscuit is pretty good with a dense filling of sticky sweetness and savory flavors. Pastry was flaky and good. 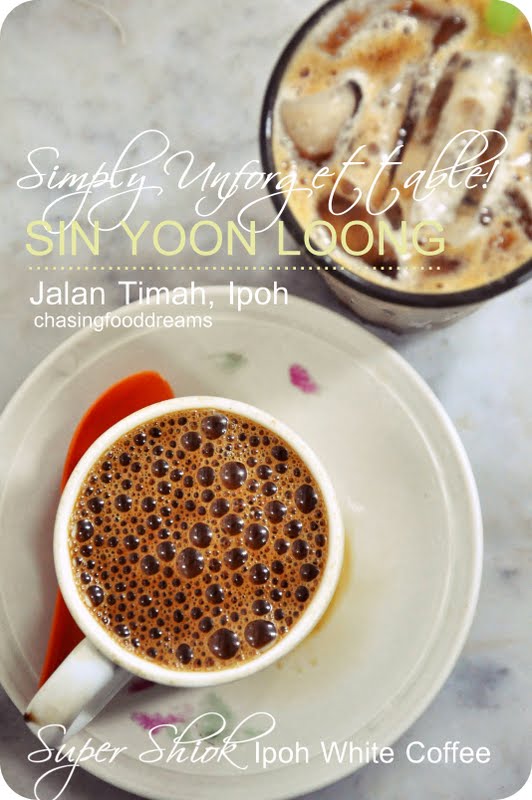 Would I drive over 200km to Ipoh to visit Sin Yin Loong Coffee Shop? Yes. Their Ipoh White Coffee is really awesome and now that I have had the best, it would be hard to find one that can rival this here in KL. It’s not fancy, it’s not air-conditioned, customers and loudness may even get on your nerves but it’s got the best Ipoh White Coffee with lots of heart & soul in town. Sin Yoon Long Coffee Shop is a national treasure on its own! 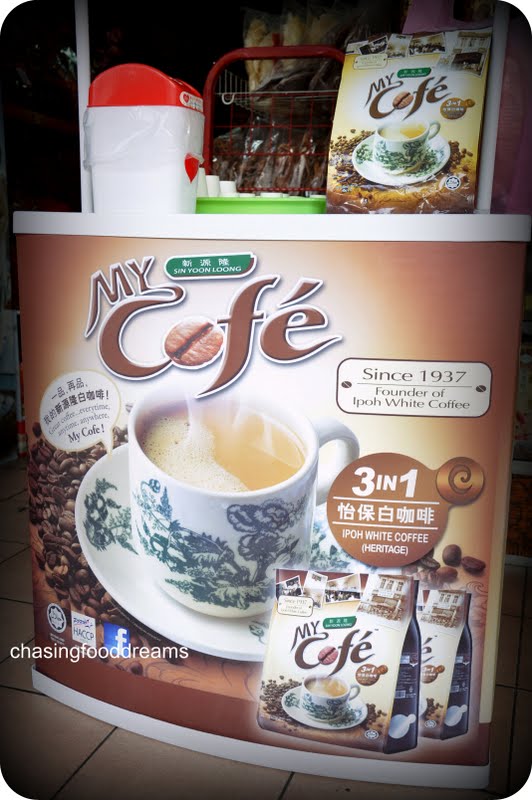 *Psst… I saw a shop nearby selling Sin Yoon Loong’s pre-packed instant coffee with its trademark! Bought one back and though it’s not exactly the same as the one we had at the shop, it’s a near close in flavor. Oh well… at least I don’t have to drive over 200km when I suddenly craved for an Ipoh White Coffee from Sin Yoon Loong… wink!