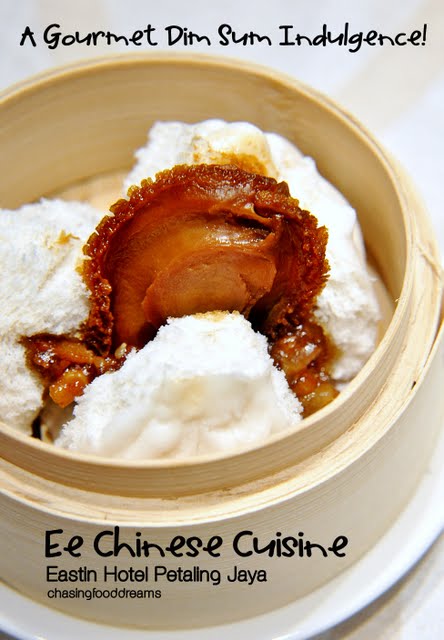 The sheer opulence of multiple altitudes of small morsels of dim sum is simply a gastronomic indulgence!
Not many hotel dim sum places impress me but recently, I have found two places worth every bit of its price and that impresses the ‘hell-out-of-me”!! Now let’s compare apples to apples and leave the oranges aside. We are talking about indulging our senses on delicate morsels of exquisite dim sum with lavish ingredients! 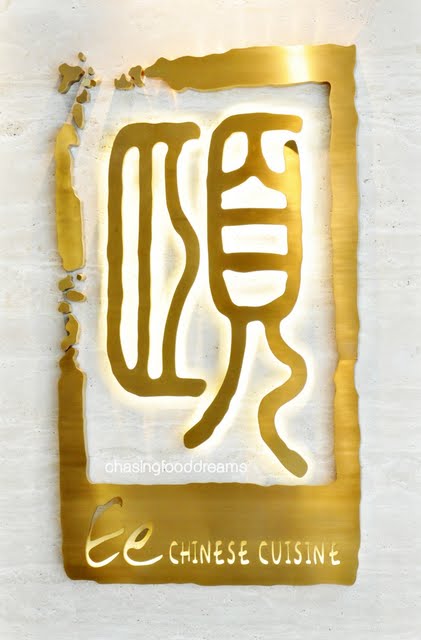 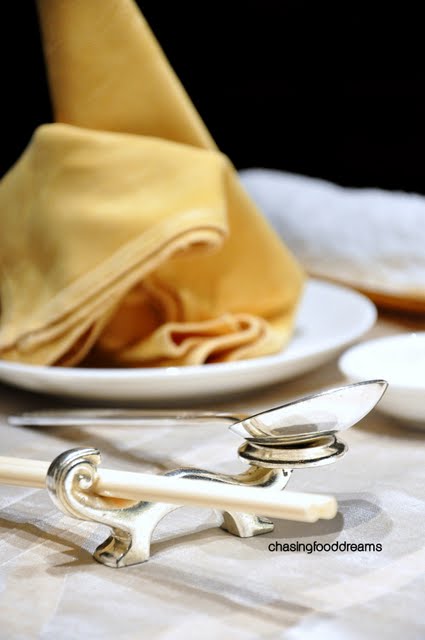 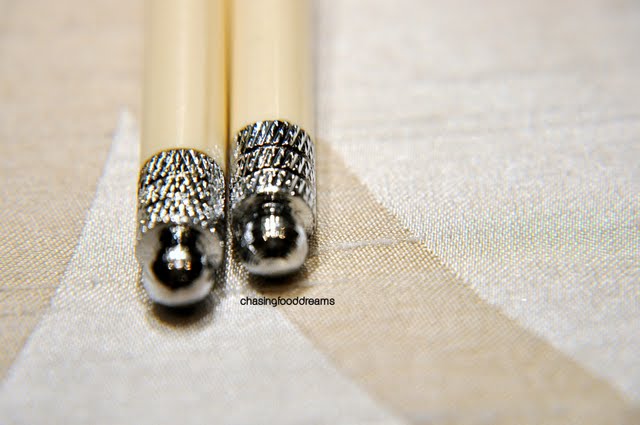 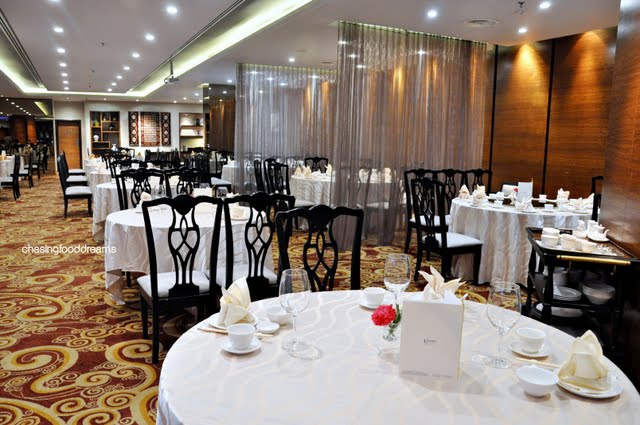 Back at Ee Chinese Cuisine at Eastin Hotel Petaling Jaya recently, I had the honored of indulging at their promotion of All-You-Can-Eat-Dim-Sum spread plus an additional indulgence of an amped up Char Siew Bao. Seriously, I am very surprised that EE Chinese Cuisine’s magnificent dim sum has not been exposed earlier. Read on for my ranting ravings of extravagance dumplings and more (be warn in advance… there maybe immediate craving effects should you continue to read on!). 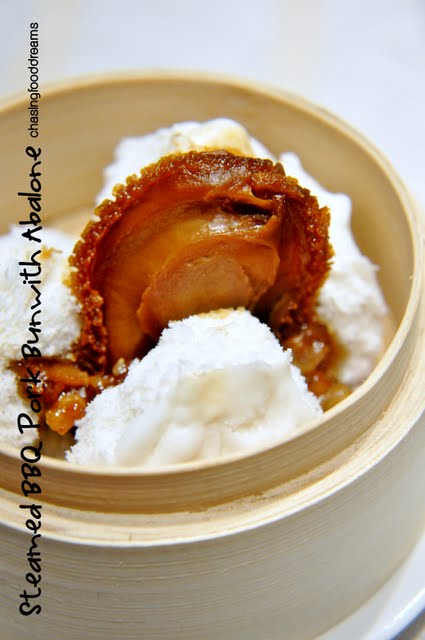 Let’s start with the most lavish bun that I have ever savored… Steamed BBQ Pork Bun with Abalone! It just couldn’t get any more luxurious than having a whole baby abalone glazed with honey sauce stuffed proudly into the ‘Char Siew Bao’. This lavish Bao is not included in the All-You-Can-Eat-Dim-Sum promotion. 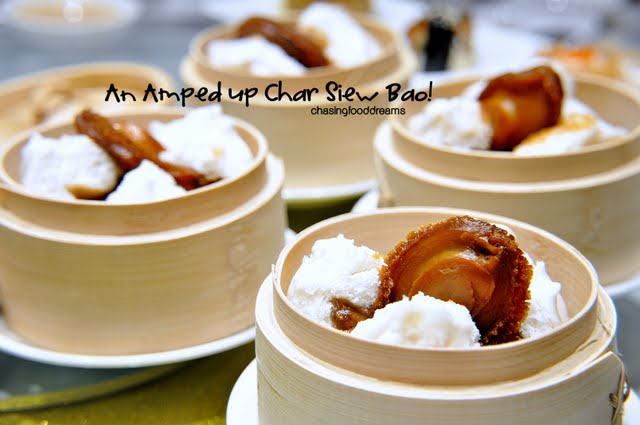 The BBQ pork bun had all the essential requirements of a great Char Siew Bao. Bao was indeed fluffy and soft while the rich and deep Char Siew sauce with bits of pork was sweet, savory and sticky to the taste. A sizable portion with each Bao costing RM30 ala carte, it is quite a heavy price but if you feel like splurging, be my guest… after all… you are savoring one of the priciest seafood in the ocean!  Kudos to the chef for his bravery in jazzing up the Char Siew Bao!!
Anything from this onwards is part of the All-You-Can-Eat-Dim-Sum promotion. Bear in mind, we were assured that everything you see is the same as what is served in their ala carte menu. There are unlimited servings for all the dim sums including the double boiled soups. 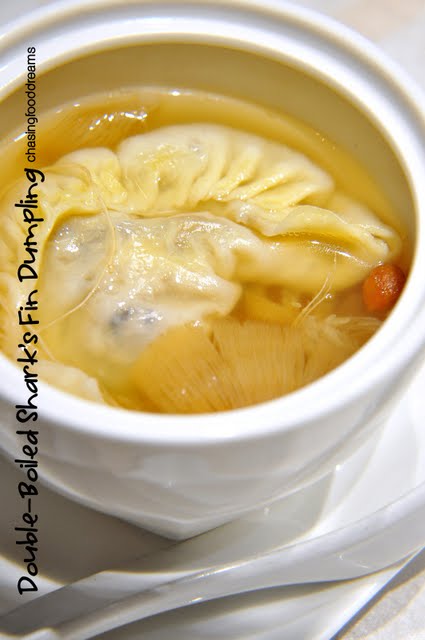 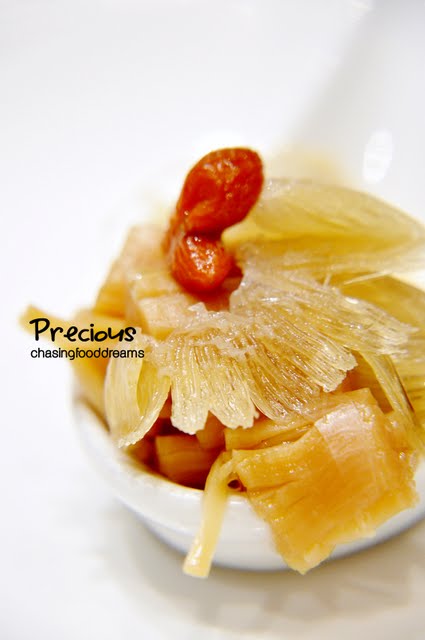 ‘Kun Tong Gao’ or Double-Boiled Shark’s Fin Dumpling had me at Hello! A soup brimming with precious sea treasures such as shark’s fin and dried scallops with Chinese ginseng, bamboo pith, goji berries while the large dumpling was stuffed with fresh crab meat, fresh scallop and mushroom. A sip was enough to pamper my soul as the superior broth was aromatic from the chicken essence while the hints of ginseng were very assuring of health benefits. At the very moment, it just could not get any better than this from such pampering!
There are two other kinds of soups available besides this one and both sounded equally promising with Seafood Egg Dumpling in Superior Broth and Cuttle Fish Ball with Superior Broth. I would gladly try both the next round (yes, I m already planning to go back with my family!!!).
*For those who do not take Shark’s fin, kindly inform the wait staff to omit it from the soup as one will still enjoy the soup with the other sea treasures! 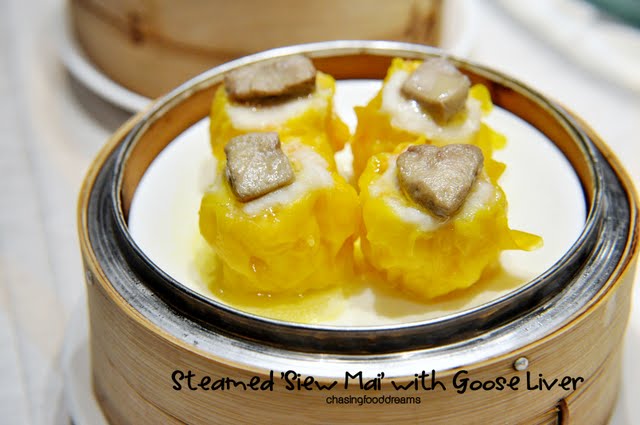 Talked about lavish again, I found out that the steamed ‘Siew Mai’ is boosted up with foie gras! Ee Cuisine means serious business when it comes to the quality of their dishes. Each Steamed ‘Siew Mai’ with Goose Liver is topped with a cubed of the opulence foie gras in its natural form. When steamed, the foie gras is fairly firm in texture and has a creamy edge to the flavors. Siew Mai was stuffed to the max with pork and chunks of juicy fresh prawns, exuding a lovely balance of savory flavors with a great texture. This dumpling passed with flying colors in my books! 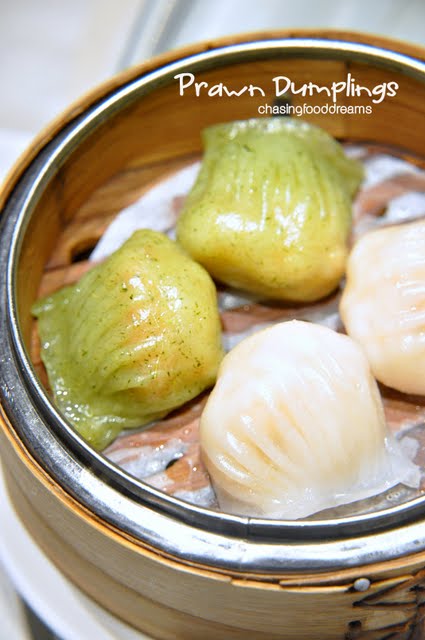 Another crucial check point for a fabulous dim sum is the Prawn Dumplings or ‘Har Kau’! The version here has nice thin skin that is sufficient enough to hold its juicy fillings without tearing apart when lifted. A basket of Har Kau comes with two original skin prawn dumplings and two spinach skin prawn dumplings. I loved it when there is texture in the fillings and the ones here has chunks of fresh prawns with a natural sweetness. The whole dumpling was just fabulous to boots and I was even told that they stick to their rule of a minimal of 12 folds for each dumpling… such intricate effort denotes that only the very best is served here at Ee Chinese Cuisine! 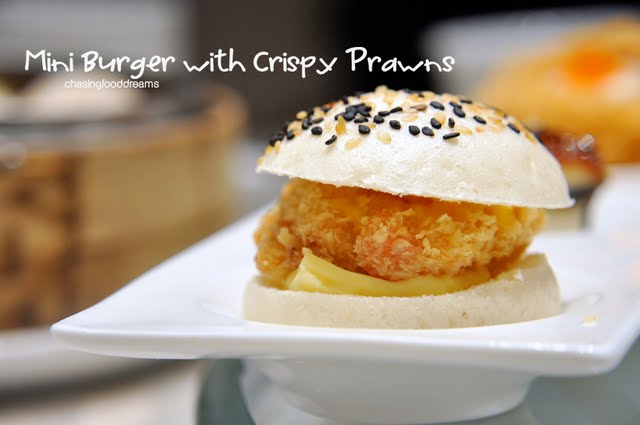 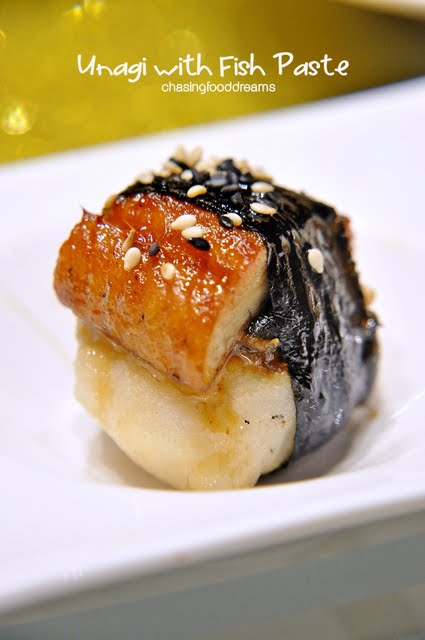 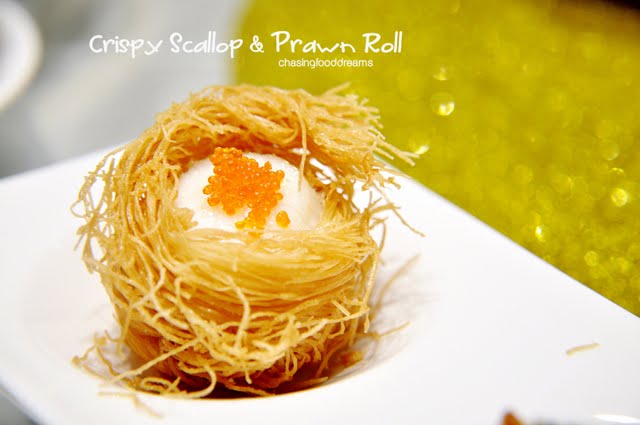 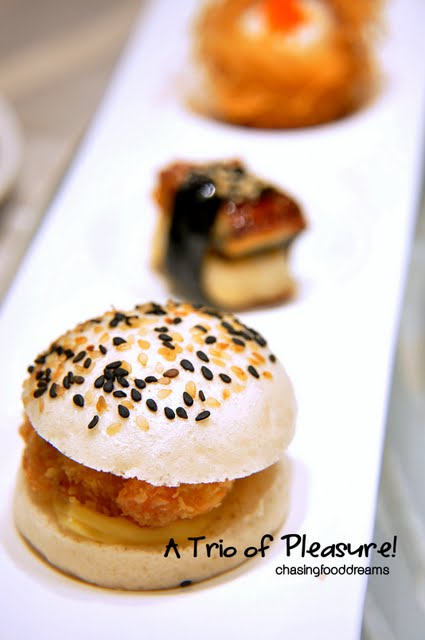 We savored a trio of dim sum ‘fusionized’ with a worldwide influence! Mini Burger with Crispy Prawns featured a fluffy Chinese Mantou sandwiching a crispy panko coated prawn burger, a slice of cheese and mayonnaise sauce. The combination matched surprisingly well as the Mantou was light and the burger was crispy and juicy. Unlike burgers, this one was delicate and delightful to be savored in miniature size portions.
Unagi with Fish Paste or ‘Man Yue Chin Yue Peng’ was another well fusion creation. A slice of thick rich and sweet Japanese grilled eel was held on to a bouncy fish paste by a strip of seaweed. The flavors of the smoky and sweet eel seem to harmonize extremely well with the fish paste. This one is simply a must-have!
The Crispy Scallop Dumpling was delicately wrapped with shredded phyllo and topped with tiny bubbles of fish roes. There was also a filling of sweet and moist prawn paste when I bit into the dumpling. No faults as the freshness of the ingredients simply shined in the dumplings. 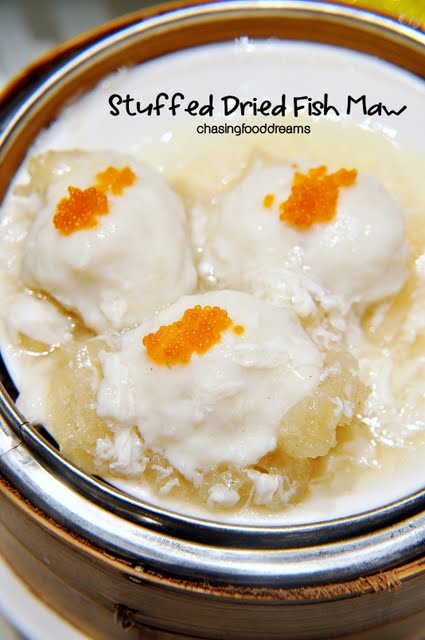 When I saw that they serve Stuffed Dried Fish Maw, I had to have this simply because it reminded me of my childhood days when I had this dim sum before in traditional dim sum house. Fresh fish paste was neatly stuffed on gelatinous fish maw and dressed with egg white gravy while fish roe crowned the dumpling. A bite had juices squirting out from the spongy fish maw while the bouncy fish paste was smoothen with the thick silky gravy. Hardly impressive compared to the earlier ones but again, I could find no faults on this dumpling though. J 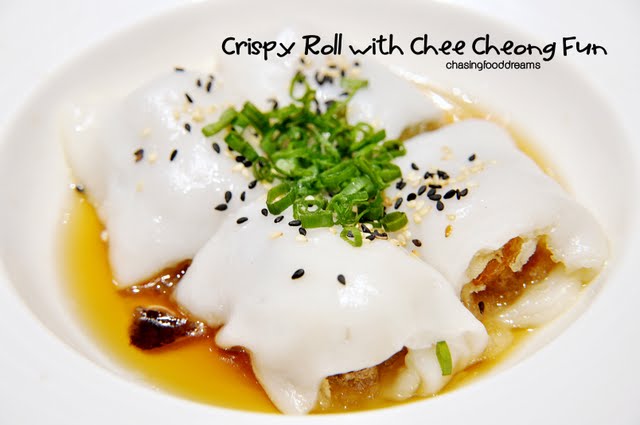 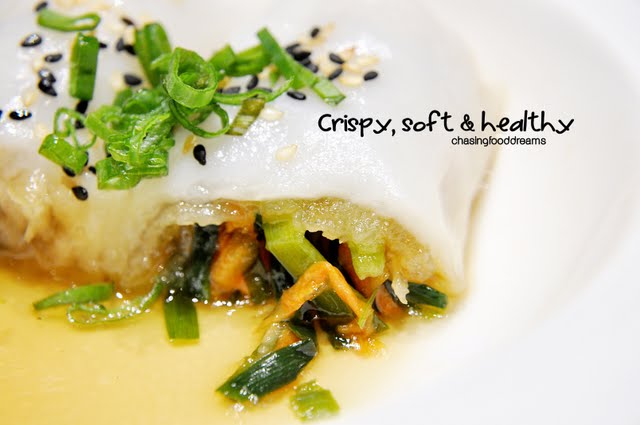 Crispy Roll with ‘Chee Cheong Fun’ was a vegetarian roll combining the ever infamous soft Chee Cheong Fun skin with a crispy Vietnamese net holding an array of julienned vegetables and topped with a light brown sauce. A wondrous combination of textures and flavors summed up this dim sum! 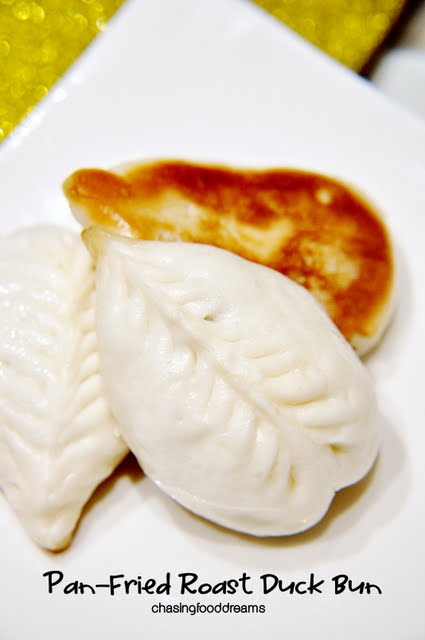 Pan Fried Roast Duck Bun is a pan fried Bao stuffed with minced duck meat and mushroom swimming in a sweet, spicy and caramelized BBQ sauce. I detected traces of black pepper in the sauce. Mediocre at its best! 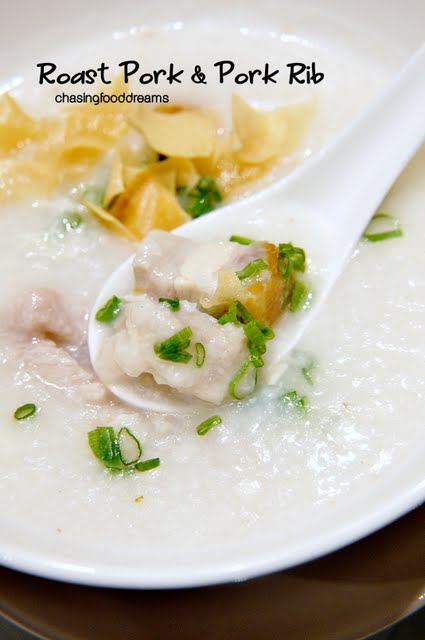 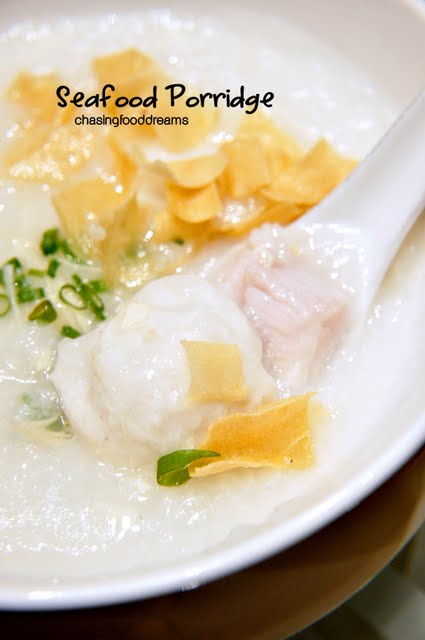 There were five varieties of porridge in the menu and we selected Roast Pork and Pork Rib Porridge and Seafood Porridge. Both porridges were equally silky smooth on texture while flavors were gentle with traces of soy bean in the background. Depending on which ingredients one prefers, I have to conclude that both were equally good on its own merit. The portion is fairly big and I recommend sharing these to save room for other dim sums. 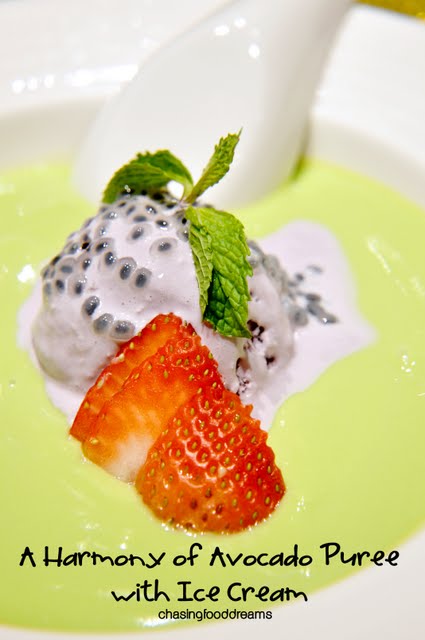 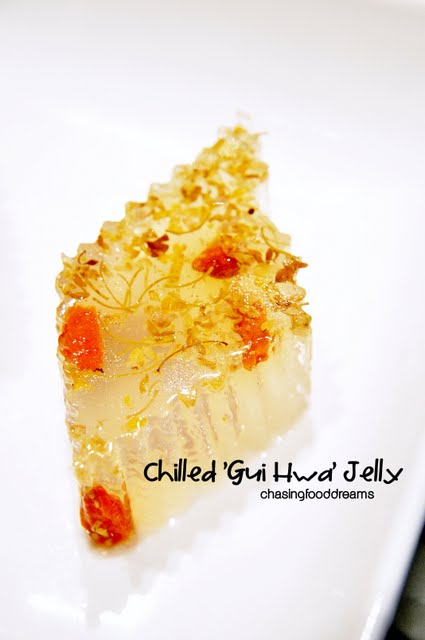 A Harmony of Avocado Puree with Ice Cream came highly recommended and we could see why… the palette of contrasting colors of chilled bright avocado green puree was surrounding a scoop of pastel purple yam ice cream. Sweet, creamy and almost earthy, the combination was very unique in a good way. A sauce of sweet and crunchy basil seeds provided the crunch factor while a splash of red strawberry slices completed the presentation.

Another foodie was a huge fan of osmanthus flavors thus Osmanthus Jelly was a no-brainer order. Almost too pretty to be eaten, the pale gold yellow jelly was speckled with osmanthus flower petals and red goji berries. Sweet with a slightly salty undertone, the jelly was refreshing and light. 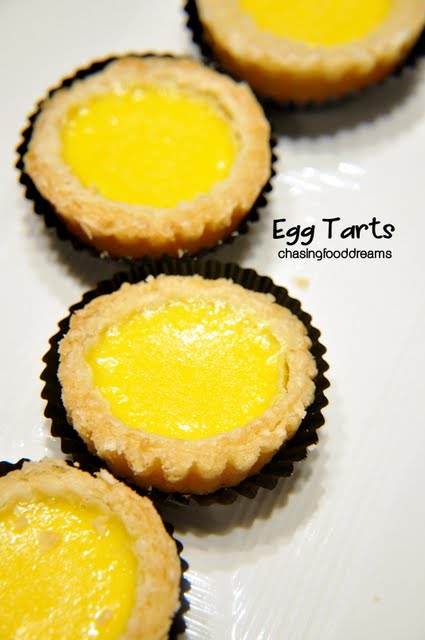 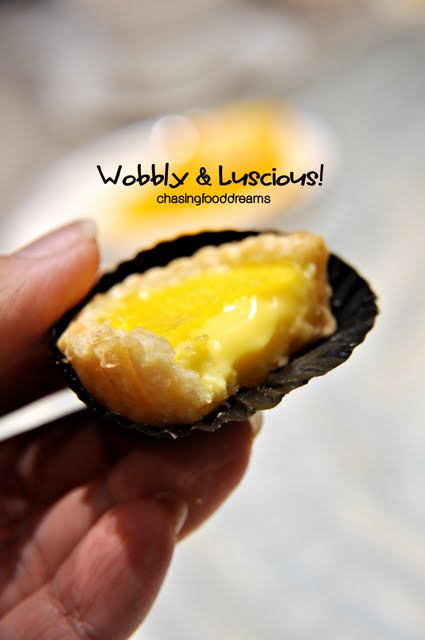 We ended our dim sum excursion the traditional way with Egg Tart. Another testament to a true blue dim sum is the infamous egg tart where many have attempted but only some have successfully passed with flying colors. Apparently the egg tart is also another signature dim sum from the chef and I couldn’t agree more on this proclamation. Superbly light, flaky and rich, the melt-in-the-mouth tart shell held yellow luscious egg custard like a precious gem. A bite reveals the thick egg custard still soft and flowing like a thick silky cream. Heaven in a bite! 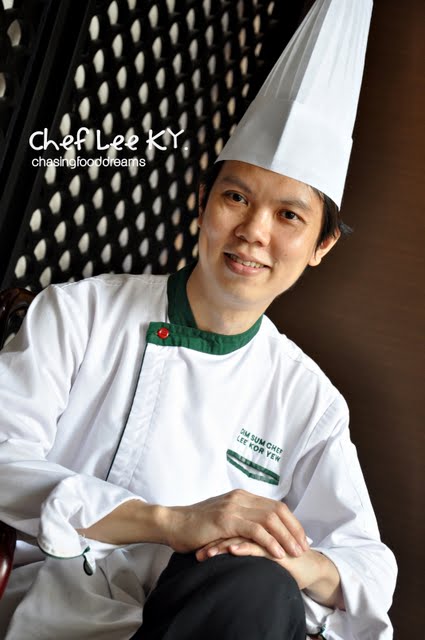 Chef Lee Kor Yew is the masterchef behind these fabulous dim sums! Almost too humble in nature, Chef Lee simply has no clue of his own talent in creating bold and scrumptious dim sum fares as he humbly admits that his creations are good but not the best. Embarking on this career by accident, Chef Lee gleefully explained that he actually accompanied a friend to an interview for a position in the kitchen but somehow was roped in for the job as well. More than a decade later, Chef Lee has worked his way up by experiencing through years of training and dedication in the dim sum department to be where he is today at Ee Chinese Cuisine. 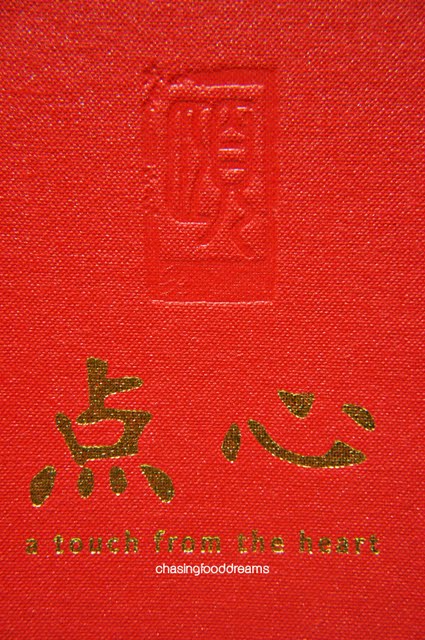 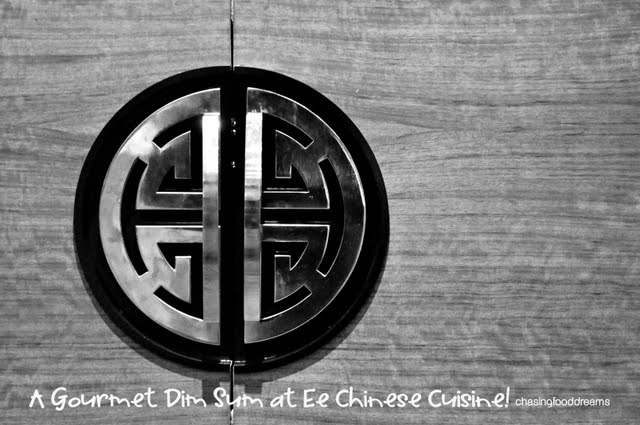 Concluding my ranting ravings, this is one Dim Sum that You Don’t want to Miss! Forget the usual breakfast do and savor the All-You-Can-Eat-Dim-Sum promotion at Ee Chinese Cuisine, Eastin Hotel PJ during the weekends! The promotion is extremely value-for-money with such lavish ingredients on its menu like Shark’s Fin, goose liver, scallops, crab, eel and more. With more than 20 varieties of quality dim sum featured each weekend, RM48.00++ (per adult) is worthy for some indulgence of dim sum. In case you are thinking of rushing to book this weekend for this All-You-Can-Eat-Dim-Sum promotion, rest assured that there are plenty of opportunities as the promotion is extended to year-end.
One cannot help but to love their tagline for this promotion of ‘Eat all they want, as many times as they like’!
Available every Saturday from 12.00pm to 2.30pm and Sunday & Public Holidays from 10.00am to 2.30pm, reservation is essential at +603 7665 1111 ext. 137.
Ee Chinese Cuisine
Eastin Hotel Petaling Jaya
13, Jalan 16/11, Pusat Dagang Seksyen 16,
46350 Petaling Jaya, Selangor, Malaysia.
Tel: +603 7665 1111; Fax: +603 7665 9999
Email: info.pj@eastin.com
Website: www.eastin.com
Facebook: https://www.facebook.com/#!/eastinhotelpj
*My other All-You-Can-Eat-Dim-Sum benchmark for hotels is found here!
Email ThisBlogThis!Share to TwitterShare to FacebookShare to Pinterest
Labels: Chinese, Dim Sum, Hotel, Invited Events, Petaling Jaya, Pork, Promotion