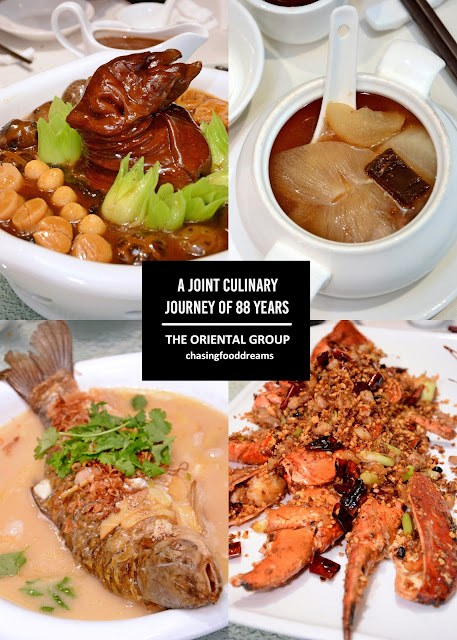 Nothing short of a stunning culinary indulgence best describe the dining experiences at all The Oriental Group restaurants! The annual chef event where legendary “Old Master” chefs collaborates with The Oriental Group Executive Chef Justin Hor and the group’s in-house talent is back for the 11th year with a big bang. 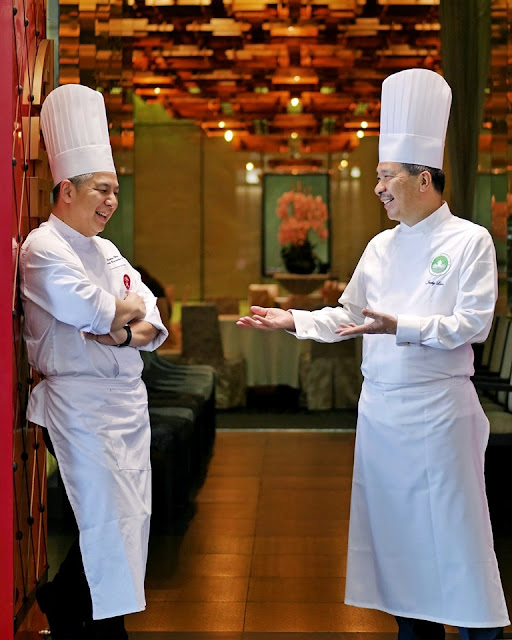 Taking on new culinary heights, Chinese veteran Chef Jacky Lam from Macau’s Galaxy Hotel and Oriental Group Executive Chef Justin Hor has curated A Joint Culinary Journey of 88 Years menu for this year’s Grand Dinner series. Having collaborated previously back in 2011, both chefs are excited in combining their culinary experiences of 35 years and 53 years in the industry with an unforgettable gastronomical menu to be available from 19 August to 22 September 2019 at their leading restaurants. 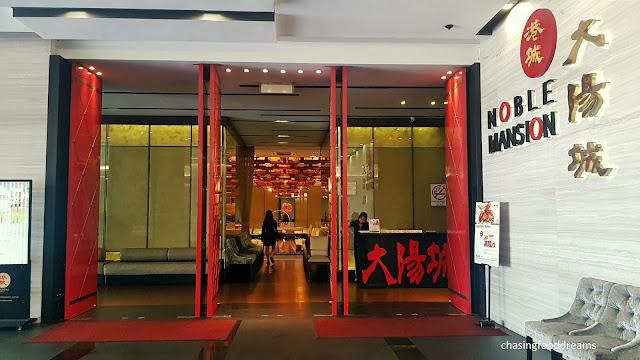 Our culinary journey this year led us to Noble Mansion at Plaza 33 in PJ area. The exclusive fine dining Noble Mansion is the perfect venue for indulgence set in an elegant ambiance. 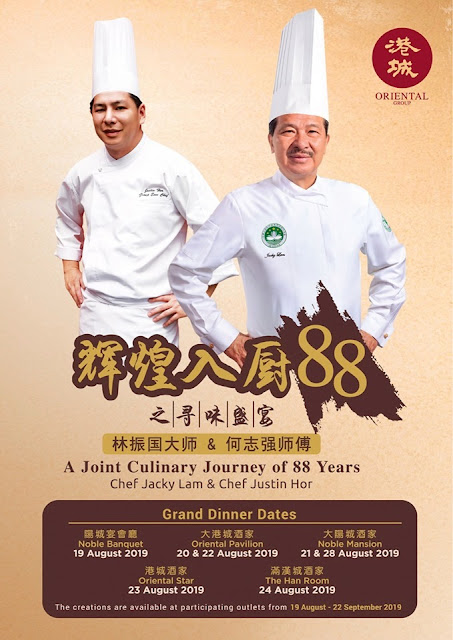 Combining flavours of yesteryears and brining new updates to the culinary palates, the Joint Culinary Journey of 88 Years Grand Dinner had both chefs working for the past 6 months in planning, curating and sourcing for ingredients for the menu. The talents and skills from both chefs certainly spark new culinary dishes for gourmands. 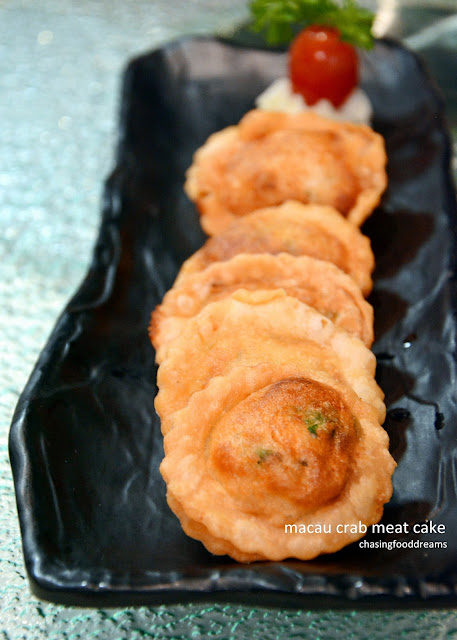 Golden discs of Macau Crab Meat Cake tasted so delicious that one may need to seize the urge to reach out for another one. The meat cake has a tasty meat and crab meat filling that is juicy and bouncy with a subtle sweetness that is very enjoyable. 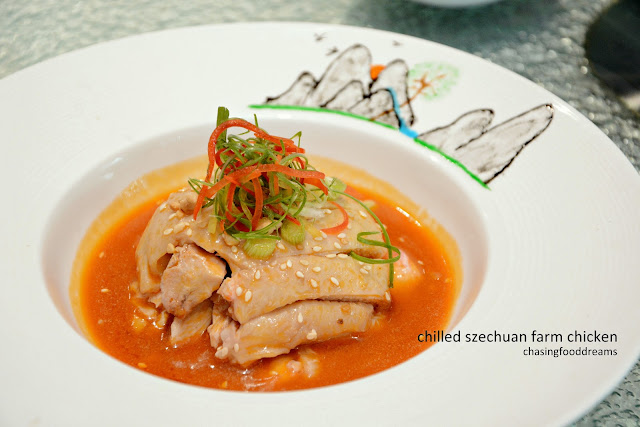 Chilled Szechuan Farm Chicken, tender and firm chicken doused generous in the piquant and lightly Szechuan peppercorn laced chili sauce, is a guaranteed explosion of flavours in the mouth. Aromatic and a classic dish that always has a spot in my books. 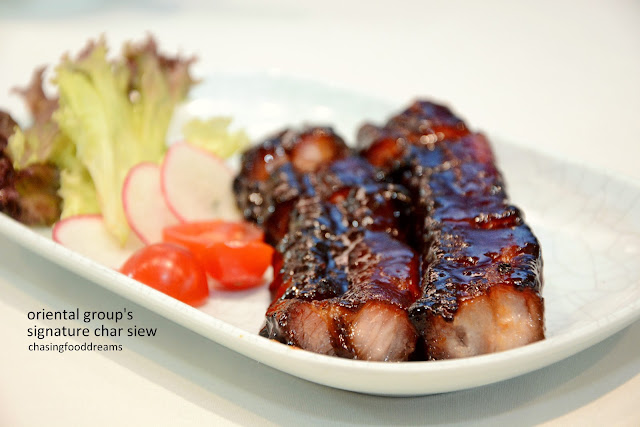 Oriental Group’s Signature Char Siew is simply faultless. All the right markings of a wondrous caramelized pork strip with solid ratios of fat and lean meat, the balance of sweetness and savory notes borders pleasurable satisfaction. 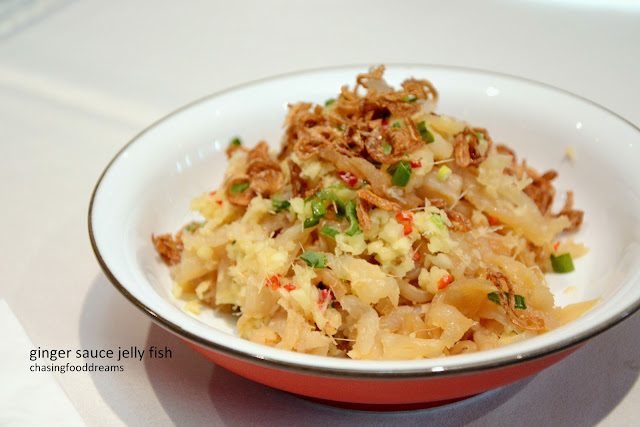 The Ginger Sauce Jelly Fish was an interesting update to the classic version. Bold Bentong gingery notes perked up the dish with a kick of flavours. It’s spicy from chilies and aromatic of the fried shallots plus the crunchy jelly fish made this dish a memorable one indeed. 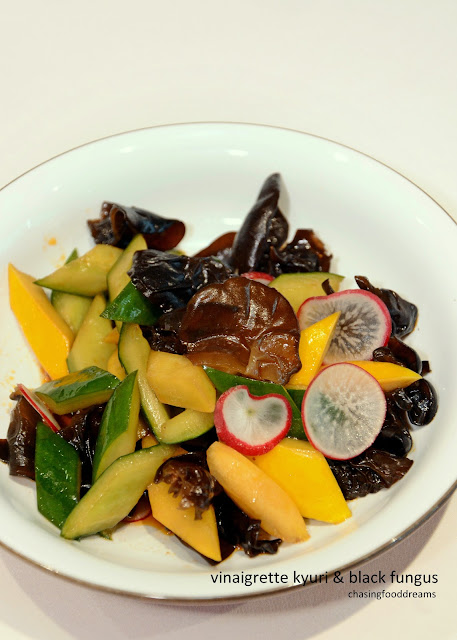 The simple combination of Vinaigrette Kyuri & Black Fungus along with bell peppers and radish in an aromatic dressing has such lovely moreish notes that is worthy of an order. 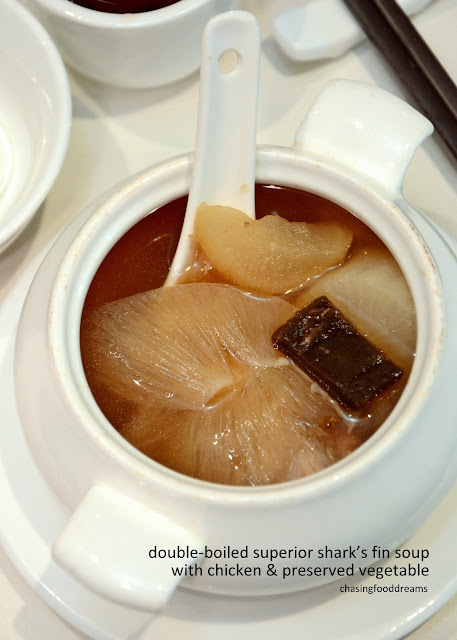 In one of their culinary expeditions to remote mainland China, both chefs discovery of a rare aged preserved radish or choy poh was a delicious discovery in the menu. Said to be an ingredient with nutritious benefits such as maintaining respiratory system and strengthening immune, the aged choy poh is a rare fine these days. The tedious process requires salting, brining, drying and constant repeated yearly drying to result in the darken blackish colour with unique muskiness and intense salty-sourish notes. 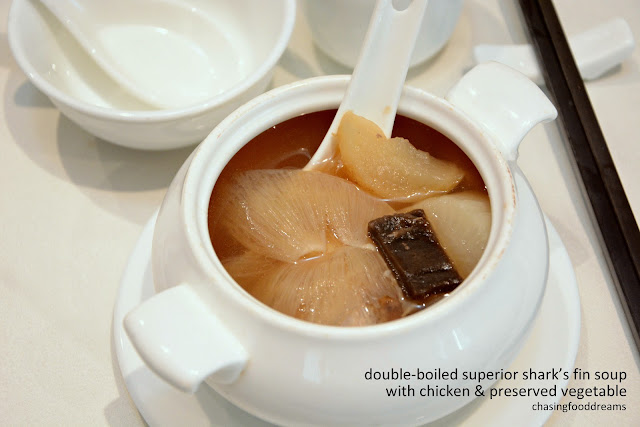 Combining three types of Chinese radish from the 30-years old aged radish to 6 months old radish and fresh radish into the broth of the Double-Boiled Superior Shark’s Fin Soup with Chicken & Preserved Vegetable (RM118 per pax) epitomize the creative and talents of both chefs. The result is simply luxurious. The 3-hours of double-boiled broth has such gorgeous earthy and musky notes with subtle sweetness that is so flavoursome and satiating on the palate. The various textures of the radishes along with premium shark’s fin and chicken is also delectable and unique. Simply unforgettable! 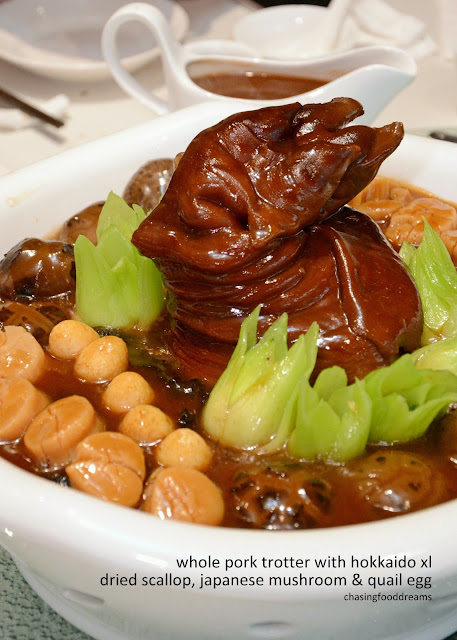 Manchu Han Imperial Feast, reserved for Emperors, was one of the grandest meals ever documented in Chinese cuisine according to Wikipedia. It was said to originate from during the era of Qing Dynasty when Kangxi Emperor held a grand banquet for his 66th birthday celebration. The feast lasted three whole days with six banquets consisting over 300 dishes. One of the dish was a braised bear paw hence Chef Lam uses Pork Trotter to replace the illegal ingredient. 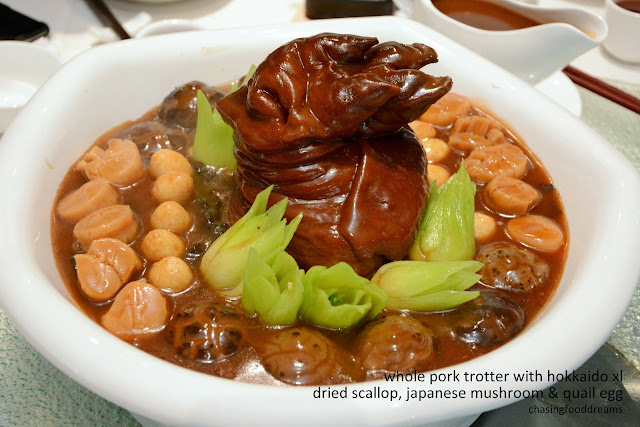 The Whole Pork Trotter with Hokkaido XL Dried Scallop, Japanese Mushroom & Quail Egg symbolizes Kangxi Emperor’s conquest of China with ingredients based on elements of land, people, prosperity and power. The pork trotter is utterly glorious, braised till the meat is beautifully tender and flavourful while the skin is gelatinous and melts-in-the-mouth. 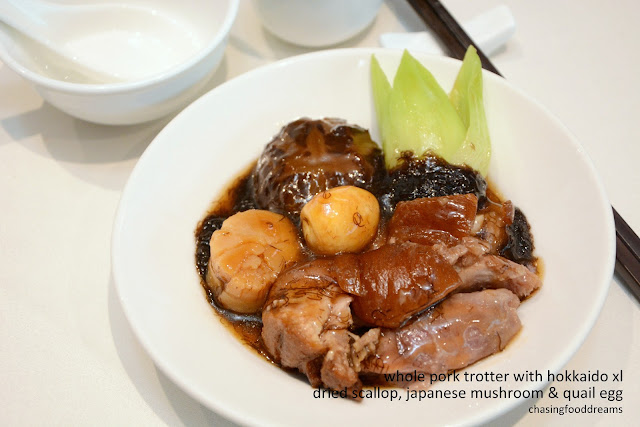 Premium large dried scallops are literally almost falling apart with plump mushrooms and fried quail eggs with flower-cut greens are simply sublime in that dark robust sauce. It’s a dish that oozes comfort pleasures yet shows off how skillful the chefs are in perfecting all the elements of the fine dish. Simply impeccable in all senses! 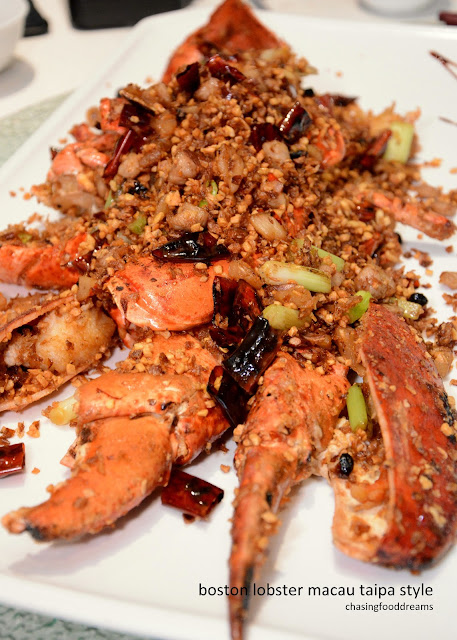 The next dish of Boston Lobster Macau Taipa Style (RM368 each) takes lobster and elevated the King of crustaceans to a whole of scrumptiousness. Unbelievable aroma and flavours from the abundance of garlic, shallots, chilies, spring onions and lots of secret swine bits in the form of pork neck! 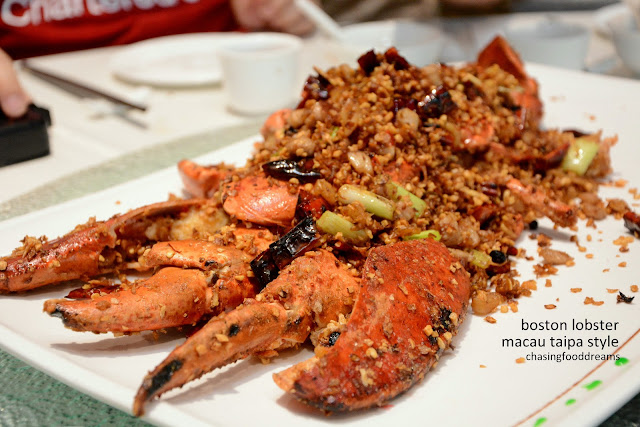 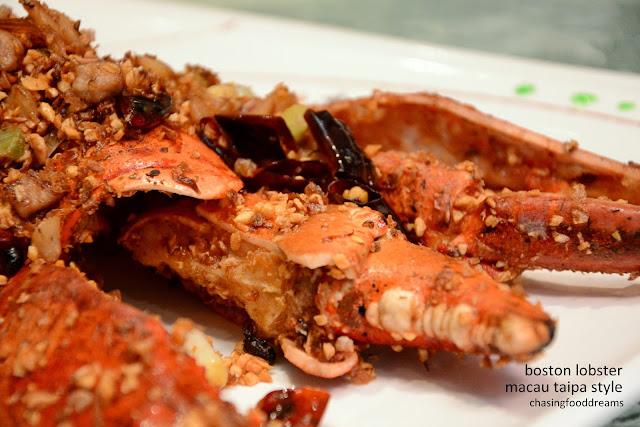 The chunks of lobster meat and claw is nicely cooked with tender sweetness that marries so well with the aromatics, so much so that one will be licking the shells clean. 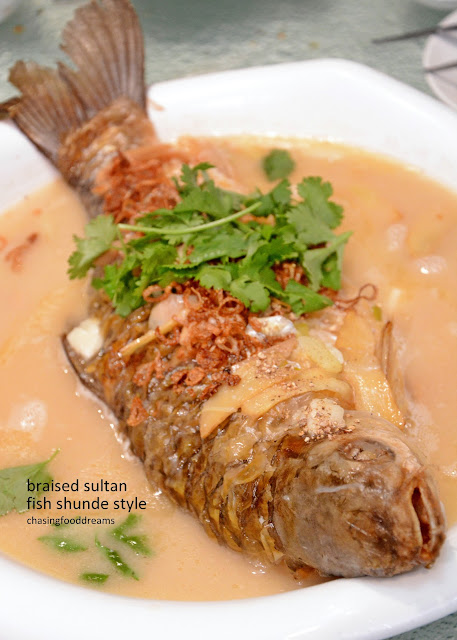 Malaysia’s river holds plenty of wild fishes that deserves some limelight. The clever take on using one of Malaysia’s premium Sultan fish paid off in Braised Sultan Fish Shunde Style (RM388 each). A fish that evoked a lot of memories for Chef Hor, the highly sought-after Sultan fish may be full of fine bones but the flesh is milky soft and smooth with a delicious sweetness that the fish is well-known for. 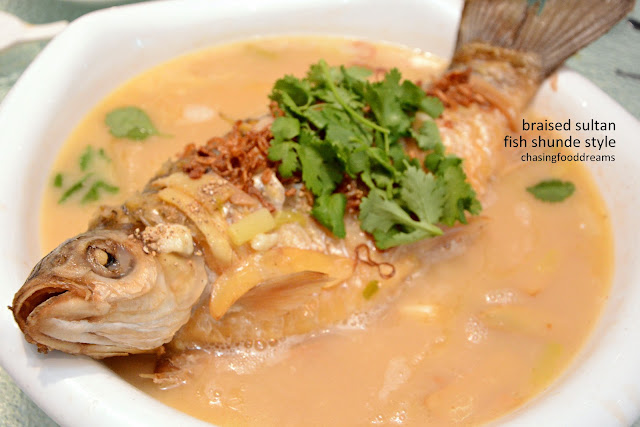 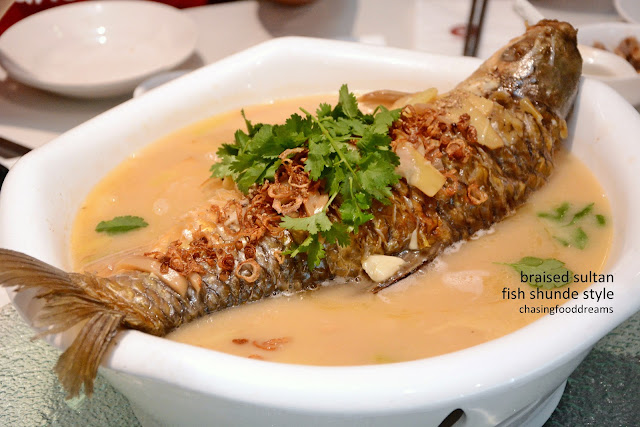 It takes a skillful chef to braise the fish long enough to absorb the glorious pork bone broth without compromising the fresh flavours of the fish. Served with scales on, the chewy scales are edible and helps to protect the flesh during the braising period. The golden creamy broth is a bomb of flavours with ends with much lusciousness on the lips. Such a sensual dish at sight and in flavours… 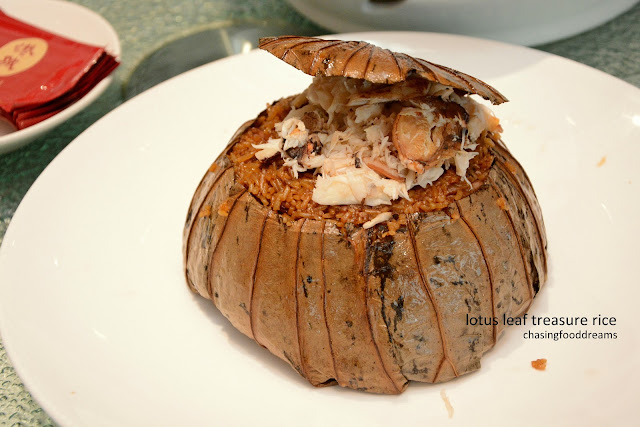 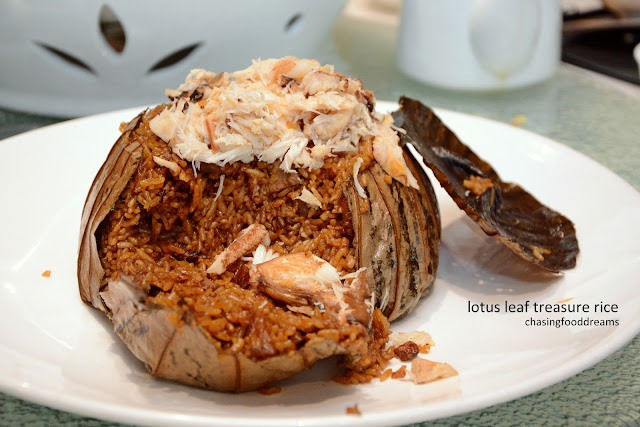 More seafood goodness with a generous mount of handpicked crab meat chunks glorifying the Lotus Leaf Treasures Rice (RM128 portion for 10 pax). The lotus leaf aroma has permeated the fluffy rice well, adding on much tasty aroma and flavour to the dish while the sweet crab meat is always a yummy touch. 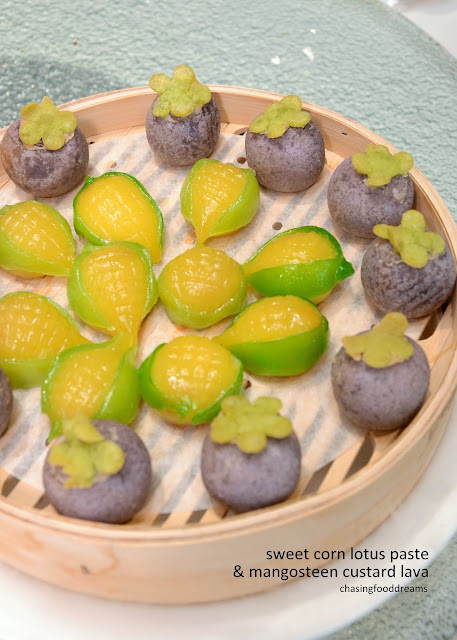 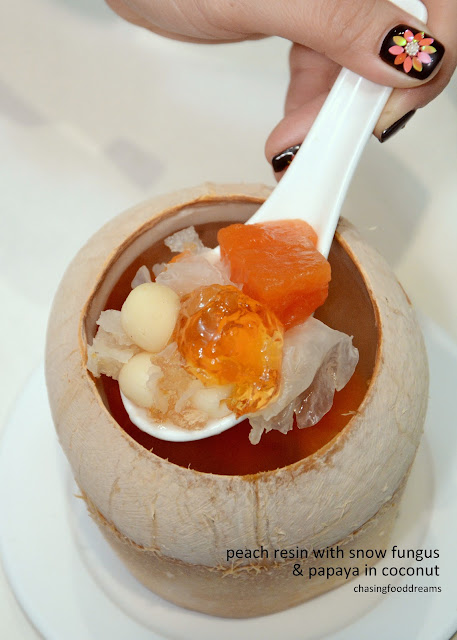 There’s something utterly soothing when enjoying the Peach Resin with Snow Fungus & Papaya in Coconut with nutritious wobbly bits of peach gum with soft papaya and snow fungus. Double-boiled for hours in the coconut, the broth has taken on the delicious aroma and flavour of the coconut along with the subtle sweetness of the other ingredients. It’s a dessert that really warms up the soul after a luxurious meal. This dessert deserves a spot in their regular dining menu. 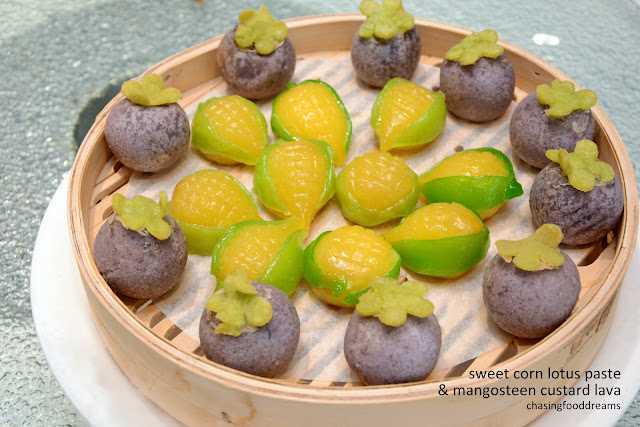 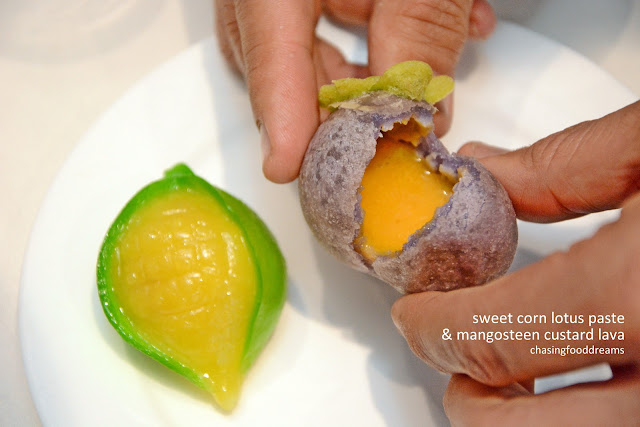 The pretty basket of Sweet Corn Lotus Paste and b are almost too pretty to be eaten. Tuck into a crisp skin encasing rich lava custard and a lightly chewy mochi-like skin encasing lotus paste with sweet corn bits and macadamia nuts. The desserts are exceptionally creative and delicious this year. 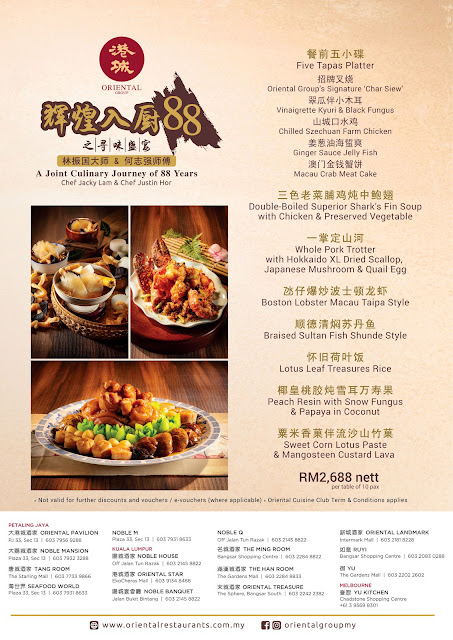 A Joint Culinary Journey of 88 Years Grand Dinner is priced at RM 2688 nett per table of 10 pax. A la carte orders of the individual dishes are also available. Gourmands can enjoy this year’s grand dinner menu till 22 September, 2019. Reservations are recommended.

Kudos to the culinary team at The Oriental Group for another year of success in raising the bar for Chinese cuisine!

For more information and reservation, visit www.orientalrestaurants.com.my or Facebook: www.facebook.com/TheOrientalGroupofRestaurants
for the respective restaurant details.